All articles from this author
Jian-Ming Lv


All articles from this author
Liang-Yan Xiao


All articles from this author
Qian Xu


All articles from this author
Fu-Long Lin


All articles from this author
Gao-Qian Wang


All articles from this author
Guo-Dong Chen


All articles from this author
Sheng-Ying Qin


All articles from this author
Dan Hu

This article is part of the thematic issue "Enzymes in biosynthesis".

Terpenoids are a large class of natural products that attract extensive attention, due to not only their potential applications in pharmaceuticals, agrochemicals, etc. but also due to their abundant structural architectures [1]. Fusicoccane (FC)-type terpenoids are a subgroup of diterpenoids possessing a unique 5-8-5 tricyclic skeleton, which can be produced by plants, fungi and bacteria [2]. This type of diterpenoids, represented by fusicoccin A and cotylenin A, can serve as efficient modulators of 14-3-3 protein–protein interactions (PPIs) [3,4]. 14-3-3 PPIs, which refer to the binding interactions of 14-3-3 proteins with hundreds of “client” proteins, are associated with many diseases, such as cancer and neurodegenerative diseases [3,4]. As a result, lots of attempts, including traditional isolation from nature [5-8] and chemical synthesis [9], have been made to expand the structural diversity of FC-type diterpenoids for drug development.

Along with the development of low-cost sequencing technologies and tractable heterologous expression systems, genome mining has become a promising strategy for targeted discovery of natural products [10-12], which can also provide enzymatic tools toward combinatorial biosynthesis [13,14]. As terpene synthases play a fundamental role in constructing molecular skeletons, great efforts have been devoted to mining novel synthases in pursuit of new terpenoids [15-17]. It is generally accepted that the FC-type diterpene skeleton is formed from geranylgeranyl diphosphate (GGPP) via a concerted C1,11–C10,14-bicyclization, followed by a C2,6-cyclization [18-21]. Theoretically, according to the configuration of stereogenic centers at C2, C6, C10, and C14 introduced during the two cyclization steps, FC-type diterpene synthases (DTSs) could be divided into 16 subtypes [20]. Furthermore, considering the modes of potential carbocation rearrangement and final carbocation quenching, there might be more FC-type DTSs in nature. To date, only five distinct FC-type DTSs, including fungi-derived PaFS/SdnA/MgMS and bacteria-derived CotB2/CpCS, have been reported (Figure 1) [20-24], implying that there still exists a large enzymatic space remaining to be explored.

Herein, we characterize a two-gene cluster from Talaromyces wortmannii ATCC 26942, in which TadA is identified to be a new FC-type DTS responsible for the formation of talaro-7,13-diene, and the associated P450 enzyme TadB is characterized to be a multifunctional enzyme, converting talaro-7,13-diene to highly oxygenated talaro-6,13-dien-5,8-dione.

We used MgMS, a previously identified FC-type DTS in our group [20], as a query to perform local BLAST search against our in-house fungal genome database, and then found a candidate enzyme TadA from T. wortmannii ATCC 26942. Further phylogenetic analysis of TadA and representative fungal DTSs showed that TadA falls within the clade of FC-type DTSs (Figure 2A). In light of showing low amino acid sequence identity (<50%) to reported fungal FC-type DTSs [20,22,24,25], TadA was annotated as a putative new FC-type DTS. We then scanned the flanking region of tadA, and found a cytochrome P450 gene tadB. Accordingly, the two-gene cluster was termed tad cluster (Figure 2B), and the sequence data was deposited in GenBank under the accession number ON624151.

In order to analyze the function of TadA, we introduced tadA into the quadruple auxotrophic host Aspergillus oryzae NSAR1 (niaD−, sC−, ∆argB, adeA−) (Supporting Information 1, Tables S1 and S2) [26], which has been widely used for biosynthesis of fungi-derived natural products due to its genetic tractability [27]. The resulted transformant was cultivated in the modified Czapek–Dox medium for four days, and then mycelia were harvested and extracted for analysis. Upon gas chromatography-mass spectrometry (GC–MS) analysis, we observed an additional peak at m/z = 272 [M]+ from the tadA harboring transformant, implying that TadA can catalyze the formation of a diterpene hydrocarbon (Supporting Information 1, Figure S1). The crude extract was also subjected to high-performance liquid chromatography–mass spectrometry (HPLC–MS) analysis. It showed that introduction of tadA led to the generation of two products 1 and 2, but at low yields (Figure 3A, lines i and ii). To facilitate the isolation of these compounds, we co-expressed tadA with the GGPP synthase (GGPPS) gene (Supporting Information File 1, Note S1) derived from Nodulisporium sp. (No. 65-12-7-1) [28] in A. oryzae NSAR1. Although GGPP was not detected, production of 1 was increased by five-fold (Figure 3A, line iii). Finally, we isolated 1 and 2 through large-scale fermentation.

On the basis of the quasi-molecular ion at m/z 273.2599 [M + H]+ (calcd. for C20H33, 273.2582) (Supporting Information File 1, Figure S2) detected by high-resolution electrospray ionization mass spectrometry (HRESIMS), the molecular formula of 1 was deduced as C20H32, indicating that 1 has five degrees of unsaturation. The 13C NMR spectrum showed that there are four olefinic carbons (δC 153.2, 137.4, 125.1, 118.6) in 1. We thus reasoned that 1 features a tricyclic system. Subsequently, the extensive NMR analysis established the planar structure of 1, and its relative configuration was partially assigned as 2S*,3S*,6R*,10R* by the NOESY spectrum (Supporting Information File 1, Table S3 and Figures S3–S8). As to the stereochemistry of C11, quantum chemical calculations of 13C NMR chemical shifts were performed, which enabled us to determine that C18 and H10 are located on opposite sides of the five-membered ring (Supporting Information File 1, Figures S9 and S10). The conclusion was in agreement with NOE correlations between H10 and Ha12, and between H318 and Hb12 (Supporting Information File 1, Table S3). The absolute configuration of 1 was later determined based on its oxidized product 4 generated by TadB. Based on these results, TadA was experimentally determined as a new FC-type DTS, which catalyzes the formation of talaro-7,13-diene (1, Scheme 1A).

According to the HRESIMS spectrum and NMR analysis (Supporting Information File 1, Table S4 and Figures S11–S17), 2 was established as the C19-hydroxylated form of 1. As during heterologous expression in A. oryzae, shunt products could sometimes be generated by endogenous enzymes [29,30], we performed feeding experiments to test whether 2 was generated by A. oryzae NSAR1. The result showed that the heterologous host indeed converts 1 to talaro-7,13-dien-19-ol (2, Scheme 1A; Supporting Information File 1, Figure S18).

So far, cyclization mechanisms of FC-type diterpenes afforded by PaFS [18], MgMS [20], CotB2 [19], and CpCS [21] have been deciphered. All these enzymes undergo a common C1,11–C10,14-bicyclization to form a C15 carbocation, but differ a lot at the following C2,6 cyclization (Scheme 1B). CotB2 and CpCS trigger the C2,6 cyclization via a distant hydride shift, whereas PaFS employs an intramolecular proton transfer. We recently showed that a water-mediated concerted deprotonation–protonation is required for the MgMS-mediated cyclization [20]. In order to probe the mechanism underlying the cyclization of 1, we used His6-tagged TadA to carry out in vitro enzymatic reactions with or without addition of deuterated water (D2O). GC–MS analysis showed that when the reaction mixture was supplemented with D2O, the ion peak at m/z 273 was observed, indicating that exogenous deuterium was incorporated into 1 (Supporting Information File 1, Figure S19). This suggests that TadA might adopt a similar strategy as MgMS to initiate C2,6 cyclization though protonation at C2 by bulky water.

To obtain further insights into the C2,6-cyclization process of TadA, its three-dimensional (3D) protein structure was constructed with SWISS-MODEL using PaFS (PDB entry 5er8) as the template, and the proposed bicyclic neutral intermediate was docked into the active pocket of TadA (Supporting Information File 1, Figure S20). We searched for the amino acid residues surrounding C2 or C3, which might be involved in the C2 protonation, and found the candidate residue Tyr91. In the corresponding site, PaFS possesses a histidine residue (Supporting Information File 1, Figure S20). To test its role, Tyr91 in TadA was mutated to His, and then analyzed by an in vitro enzymatic assay. The result showed that the variant could give an additional product 3 (Supporting Information File 1, Figure S21). For isolation of 3, the mutated tadA, along with GGPPS gene, was introduced into A. oryzae NSAR1, and the resulted transformant produced 3 at a titer of 0.6 mg/L (Figure 3A, line iv). By comparison of NMR data and specific optical rotation values, together with quantum chemical calculations of 13C NMR chemical shifts, 3 was determined to be (3aS,5E,9E,12aR)-3,3a,4,7,8,11,12,12a-octahydro-3a,6,10-trimethyl-1-(1-methylethyl)cyclopentacycloundecene [31] (Supporting Information File 1, Figures S22–S24), indicating that Tyr91 is an essential amino acid residue involved in C2,6-cyclization. Intriguingly, through careful examination of the GC–MS profile of the transformant expressing tadA, we also observed the appearance of 3, the content of which is rather lower than that in the tadAY91H-containing transformant (Supporting Information File 1, Figure S25). Based on these, we propose that though both MgMS and TadA use protonation-induced C2,6 cyclization, TadA likely adopts a more asynchronous process to give a neutral intermediate 3 first followed by protonation to form 1, which is different from the highly concerted deprotonation–protonation process employed by MgMS (Scheme 1B). Further isotope labeling experiments and density functional theory (DFT) calculations are needed so as to gain deeper insight into the cyclization mechanism of 1.

Due to the significance of tailoring enzymes in terms of structural diversification and bioactivity improvement [11], we then turned to the associated cytochrome P450 gene tadB. We found that introduction of tadB into the transformant possessing tadA and the GGPPS gene could result in disappearance of 1, but no additional products were observed at 208 nm (Figure 3A, line v). When the detective wavelength was switched from 208 nm to 254 nm, additional product 4 was detected (Figure 3B, lines i and ii), which was elucidated to be the highly oxygenated product of 1 through the exhaustive NMR analysis (Supporting Information File 1, Table S5 and Figures S26–S32). Based on NMR data and the fact that 4 is derived from 1, the relative configuration of 4 was assigned as 2S*,3S*,10R*,11R*. And as the experimental electronic circular dichroism (ECD) spectrum of 4 resembled the calculated ECD spectrum of (2S,3S,10R,11R)-4, the absolute configuration of 4 was determined to be 2S,3S,10R,11R (Supporting Information File 1, Figures S33 and S34). The highly oxidized properties of talaro-6,13-dien-5,8-dione (4) indicate that TadB is a multifunctional P450 enzyme (Scheme 1A). Since no other intermediates were obtained, we could not determine the exact order of TadB-mediated oxidation, or exclude the possibility that endogenous enzymes from A. oryzae NSAR1 was involved in formation of 4.

In addition, elucidating the stereochemistry of 4 also allowed us to assign the absolute configurations of 1 and 2 as 2S,3S,6R,10R,11R, raising a possibility that 1 might be the biosynthetic precursor of roussoellol C, a cytotoxic FC-type diterpenoid isolated from T. purpurogenus PP-414 [7]. It will be important to elucidate the biosynthetic pathway of roussoellol C, providing enzymatic tools for expanding the chemical diversity of talaro-7,13-diene related FC-type diterpenoids via combinational biosynthesis [14].

We have identified a new fungal FC-type DTS, which is responsible for the biosynthesis of talaro-7,13-diene (1). Further mechanistic studies revealed that 2,6-cyclization in the formation of 1 is likely to be triggered by protonation of the neutral intermediate 3, and Tyr91 in TadA plays a significant role in this process. The associated P450 enzyme TadB can catalyze multiple oxidation of 1 to highly oxygenated product talaro-6,13-dien-5,8-dione (4). This study has expanded the enzyme inventory for structural diversification of FC-type diterpenoids.

© 2022 Huang et al.; licensee Beilstein-Institut.
This is an open access article licensed under the terms of the Beilstein-Institut Open Access License Agreement (https://www.beilstein-journals.org/bjoc/terms), which is identical to the Creative Commons Attribution 4.0 International License (https://creativecommons.org/licenses/by/4.0). The reuse of material under this license requires that the author(s), source and license are credited. Third-party material in this article could be subject to other licenses (typically indicated in the credit line), and in this case, users are required to obtain permission from the license holder to reuse the material. 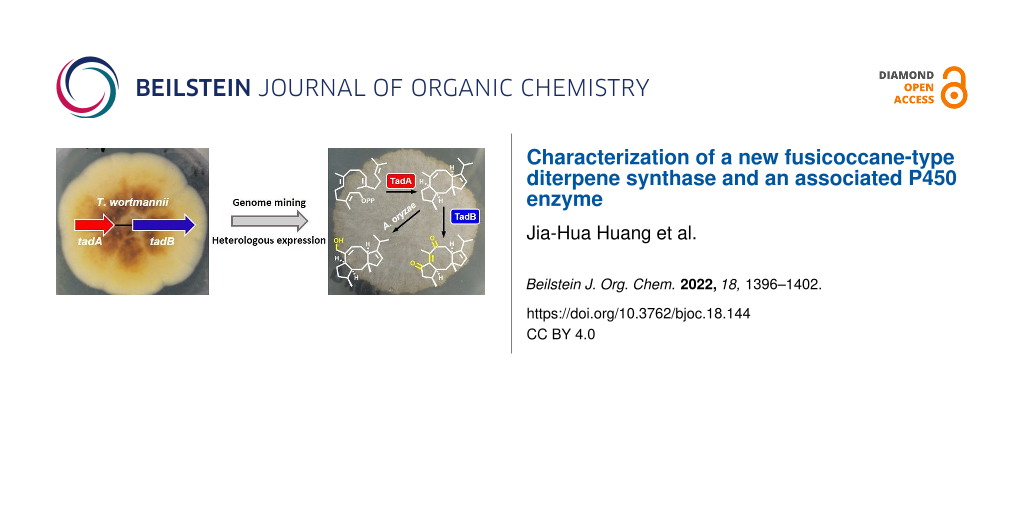