In recent years, dihydropyrimidinones (DHPMs) and their derivatives have attracted considerable attention due to the multifaceted pharmacological properties of this class of compounds [1-4]. The dihydropyrimidinone structure is found in calcium channel blockers [5-7], α1a adrenoceptor-selective antagonists [8,9], antihypertensive [10-13] and anti-inflammatory agents [14,15]. An interesting example is a rather simple DHPM derivative, monastrol, which specifically inhibits the motor activity of mitotic kinesin Eg5 and is therefore considered as a lead for the development of anticancer drugs [16].

Of particular interest are 5-unsubstituted DHPMs [17], such as compounds 1 and 2, which possess neuronal sodium channel blockade activities (Figure 1). Other examples are raltegravir, the first HIV-integrase inhibitor approved by the FDA for the treatment of HIV infection, derived from 5,6-dihydroxypyrimidine-4-carboxamide and N-methyl-4-hydroxypyrimidinone-carboxamide [18] and hydroxypyrimidinone carboxamide derivative P01, a potent inhibitor of Mycobacterium tuberculosis (Mtb) [19].

Very recently, Kambappa and co-workers reported a one-pot synthesis of 5-unsubstituted dihydropyrimidinone-4-carboxylate using gem-dibromomethylarene, oxalacetic acid, and urea [25]. Here the gem-dibromomethylarene moiety serves as an aldehyde equivalent. In addition, utilizing aromatic ketones as a β-ketoester equivalent, the synthesis of 5-unsubstituted DHPM bearing two aryl groups at the C4 and C6 positions was also reported [26]. Although several synthetic routes to 5-unsubstituted DHPM have been reported, there is still need for improvements in terms of higher yields, shorter reaction times, less hazardous or corrosive reagents, and fewer synthetic steps. Here, we report the facile and economic access to 5-unsubstituted DHPMs using a melt procedure avoiding organic solvents. The method is based on our previous reports of synthesis of organic molecules in the melt [27].

Since 5-unsubstituted DHPMs bearing the carboxylic acid moiety at the C4 position allow versatile further functionalization and are biologically interesting DHPMs [17-21], we envisioned an environmentally benign cyclocondensation protocol using low melting mixtures as a green reaction medium. We have established low melting mixtures [28-31] based on carbohydrates, urea, and inorganic salts as an alternative to conventional solvents for carrying out a variety of organic transformations [32]. The stable melts are environmentally friendly as they are readily available from bulk renewable resources. Their simple production allows the replacement of organic solvents. The melts are stable against air and have very low vapor pressures resembling the properties of ionic liquids. In addition, the polarity of these melts is very high [33]. Recently, we have explored several organic transformations such as coupling reaction, cycloaddition reaction, synthesis of glycosylurea, dihydropyrimidinones, pyrimidopyrimidinediones, and functionalized indole derivatives in this novel and green reaction medium [34-38].

In conclusion, a novel one-pot approach has been developed for the synthesis of 5-unsubstituted dihydropyrimidinone-4-carboxylate derivatives in good yields under environmentally benign conditions. Electron-rich as well as electron-deficient, highly functionalized β,γ-unsaturated ketoesters proved to be excellent substrates in this cyclocondensation reaction. The carboxylic ester substitution at C4 position provides the option for further chemical transformations on the DHPM skeleton. We hope that this environmentally benign one-pot method will find application in the synthesis of 5-unsubstituted dihydropyrimidinones.

© 2022 Gore et al.; licensee Beilstein-Institut.
This is an open access article licensed under the terms of the Beilstein-Institut Open Access License Agreement (https://www.beilstein-journals.org/bjoc/terms), which is identical to the Creative Commons Attribution 4.0 International License (https://creativecommons.org/licenses/by/4.0). The reuse of material under this license requires that the author(s), source and license are credited. Third-party material in this article could be subject to other licenses (typically indicated in the credit line), and in this case, users are required to obtain permission from the license holder to reuse the material. 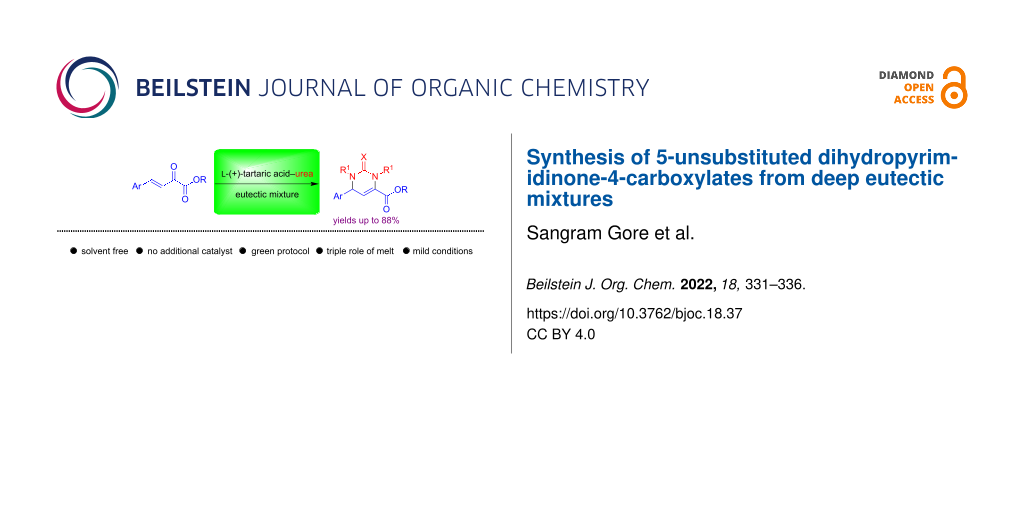