All articles from this author
Yukiko Ogawa

Novel pyridine-based fluorescing compounds, viz. pyrido[1,2-a]pyrrolo[3,4-d]pyrimidines 3a,b and N-methyl-4-((pyridin-2-yl)amino)maleimides 4a–e, were selectively prepared by a one-pot reaction between a functionalized maleimide and 2-aminopyridines with electron-donating or electron-withdrawing groups at position 5 and were investigated photophysically and computationally. The photophysical studies revealed that all the synthesized compounds exhibited fluorescence in organic solvents, while N-methyl-4-((pyridin-2-yl)amino)-substituted maleimide derivatives 4a–e, which are based on an acceptor–donor–acceptor (A–D–A) system, exhibited aggregation-induced emission enhancement (AIEE) properties in aqueous media. Compounds 4a and 4e, bearing electron-withdrawing groups (Br and CF3, respectively) showed 7.0 and 15 times fluorescence enhancement. Time-dependent density functional theory (TD-DFT) calculations were performed to gain better insight into the electronic nature of the compounds with and without AIEE properties.

Fluorescent compounds have attracted considerable attention as functional materials because of their applications in areas such as information devices, displays, and clinical diagnosis [1-3]. Organic compounds with planar structures and large π systems exhibit strong fluorescence in dilute solutions [4,5]. However, these compounds usually form aggregate structures in high-concentration solutions, and their emission efficiency, chromogenic properties, and light sensitivity decrease rapidly [5,6]. In recent years, contrary to conventional fluorescent compounds, aggregation-induced emission enhancement (AIEE)-based compounds that exhibit strong fluorescence in aggregate structures have been reported [7-10]. Because the aggregated state of AIEE-based compounds is affected by the external environment, these compounds have found use in clinical applications as chemical sensors or fluorescent probes [7-10].

Pyridine is a nitrogen-containing heterocyclic compound found in many bioactive substances and medicines as one of the basic core skeletons [11,12]. In addition, pyridine is an essential skeleton for fluorescent compounds, and fluorescence can be enhanced by optimizing the internal charge transfer (ICT) state of pyridine by introducing electron-donating or electron-withdrawing groups [13-15]. Previously, we have reported various pyridine derivatives, including polysubstituted pyridines and fused pyridines, which exhibited strong fluorescence in organic solvents (ethanol and dichloromethane) [16-19], while their fluorescence in aqueous media was quenched due to aggregation-caused quenching (ACQ) [10]. Generally, the restriction of intermolecular π–π interactions in highly planar compounds plays a key role in aggregate structures exhibiting fluorescence [5,6,10]. In addition, intramolecular mechanisms, such as intramolecular rotation (RIR), intramolecular charge transfer, and twisted intramolecular charge transfer (TICT) are involved in AIEE [20-22]. Various AIEE-based luminogens have been developed based on these mechanisms; however, many of them are high-molecular-weight compounds (MW > 500) with bulky substituents, which limits their clinical applications such as cell imaging and cell sorting.

To develop low-molecular-weight AIEE-based luminogens, we have synthesized a series of fluorescent compounds by the reaction of nucleophilic maleimides with 2-aminopyridines. This resulted in the development of a novel method to obtain heterocyclic compounds, such as ring-fused pyridines (pyrido[1,2-a]pyrrolo[3,4-d]pyrimidines) and secondary aminopyridines (N-methyl-4-((pyridin-2-yl)amino)-substituted maleimides), by changing the substituents at position 5 of the 2-aminopyridine. Interestingly, among these pyridine derivatives, secondary aminopyridines based on the acceptor–donor–acceptor (A–D–A) system exhibit AIEE properties in aqueous media, which may be novel candidate molecules for AIEE. Herein, we report the synthesis, photophysical properties, and computational studies of pyrido[1,2-a]pyrrolo[3,4-d]pyrimidines and N-methyl-4-((pyridin-2-yl)amino)-substituted maleimides.

Naka et al. previously reported the facile syntheses of N-alkyl-arylaminomaleimide derivatives as D–A system molecules by the reaction of dimethyl acetylenedicarboxylate with arylamines, which showed AIEE properties in 10% or 20% (v/v) THF aqueous solution [25]. In this reaction, the same aryl groups were easily introduced to the 4 and N-positions of maleimide. However, an additional step was required to synthesize N-alkyl-arylaminomaleimides bearing different aryl and alkyl groups. In addition, the synthesis of A–D–A-type molecules such as the introduction of pyridine rings has not been examined. Our simple one-pot method easily enables the introduction of a pyridine group to maleimide under mild conditions, affording the A–D–A-type molecules that are expected to be novel low-molecular-weight fluorescent materials in moderately good yields.

The AIEE properties of products 3a,b, and 4a–e were evaluated in different EtOH/H2O (v/v) solvent mixtures (Table 3 and Figure S20 in Supporting Information File 1). The UV–vis spectra of all compounds in H2O are shown in Figure S17 (Supporting Information File 1). The fluorescence intensities of the ring-fused compounds 3a,b gradually decreased with increasing water fractions, and the ratio of water to ethanol Φ values (ΦH2O/ΦEtOH) was smaller than 1.0. These results indicated that aggregation was induced by π–π stacking interaction of the planar structures of compounds 3a and 3b in aqueous solution and that their excited states decayed by non-radiative pathways, resulting in ACQ. In contrast, the fluorescence intensities of compounds 4a–e increased in 100% water, and the ΦH2O/ΦEtOH value was higher than 1.0, indicating that AIEE occurred. In particular, the fluorescence of compounds 4a and 4e, bearing Br and CF3 groups, respectively, largely increased with the addition of H2O to an ethanolic solution (Figure 2) with ΦH2O/ΦEtOH values of 0.07 and 0.12, respectively, which were 7.0 and 15 times higher than those in ethanol (non-aggregated form). Because compounds 4a–e form an A–D–A system, charge disproportionation may affect intermolecular π–π interactions and lead to AIEE. The enhanced fluorescence was almost completely quenched by the addition of an 0.1 M HCl solution to solutions of compounds 4a and 4e (Figure 3). This result indicated that the protonation of the secondary amine disrupted the intermolecular π–π interactions or planarity of compounds 4 (Figure 4), and the rigid structure in solution was involved in AIEE.

To compare the electronic natures of the compounds with and without AIEE, we performed TD-DFT calculations on each monomer of 3a, 4a, and 4e. The graphical representations of the highest occupied molecular orbital (HOMO) and the lowest unoccupied molecular orbital (LUMO) for the ground-state geometries of each monomer are shown in Figure 5. The dihedral angles between the pyrimidine and maleimide rings, the amine linkage, were nearly zero degrees for 4a and 4e in all three solvents, adopting a highly planar structure as well as compound 3a. The HOMO and LUMO were distributed on the entire structure of each compound owing to their high planarity in both the ground and excited states. The large overlap between these two frontier orbitals resulted in efficient absorption and emission.

The calculated vertical excitation energies of compounds 3a, 4a, and 4e, along with their oscillator strengths, are listed in Table 4. The experimentally observed Exmax values for the S0→S1 transition are somewhat different from the calculated ones, but the order of Exmaxcalc corresponds to Exmaxobs other than in water, i.e. Exmax (4a) > Exmax (3a) > Exmax (4e) in dichloromethane and ethanol. As anticipated, the S0→S1 transition in both compounds is mostly dominated by charge transfer from the HOMO to the LUMO, corresponding to a π→π* electron transition. There was no significant change (≤7 nm) in the Exmax for compound 3a in the three solvents: Exmaxobs ranged from 468 to 471 nm and Exmaxcalc ranged from 464 to 468 nm. From calculations, a smaller solvent effect is seen in the Exmaxcalc values for compound 4a (484–488 nm) and 4e (404–407 nm), whereas the Exmaxobs were found at 476 nm in ethanol and 413 nm in water for 4a and at 378 nm in ethanol and 415 nm in water for compound 4e, respectively. This discrepancy between the calculated and observed Exmax values for compounds 4a and 4e suggests that aggregation occurs in water, and such behavior cannot be reproduced using the monomer model (non-aggregated form).

aExperimentally observed excitation wavelengths are listed in Table 2 and Table 3.

To discover low-molecular-weight AIEE-based luminogens, we synthesized pyrido[1,2-a]pyrrolo[3,4-d]pyrimidines 3a,b and N-methyl-4-((pyridin-2-yl)amino)-substituted maleimides 4a–e in moderately good yields by reacting functionalized maleimides with 2-aminopyridines under mild conditions. The presence of electron-donating or electron-withdrawing groups at position 5 of the 2-aminopyridine greatly affected the fluorescence properties of the products, and N-methyl-4-((pyridin-2-yl)amino)-substituted maleimides, containing electron-withdrawing groups formed an A–D–A system and exhibited AIEE properties in aqueous media. In particular, compounds 4a and 4e bearing electron-withdrawing groups (Br and CF3, respectively) exhibited a large fluorescence enhancement. A comparison of the calculated and observed Exmax using TD-DFT calculations revealed the basic features of compounds 4. Therefore, we envision N-methyl-4-((pyridin-2-yl)amino)-substituted maleimides based on an A–D–A system as novel luminogens for AIEE and are currently investigating the underlying mechanism and future biological applications.

This work was partly supported by the Discretionary Expense of the President of Nagasaki International University and the Iketani Science and Technology Foundation (No. 0311078-A).

© 2022 Hagimori et al.; licensee Beilstein-Institut.
This is an open access article licensed under the terms of the Beilstein-Institut Open Access License Agreement (https://www.beilstein-journals.org/bjoc/terms), which is identical to the Creative Commons Attribution 4.0 International License (https://creativecommons.org/licenses/by/4.0). The reuse of material under this license requires that the author(s), source and license are credited. Third-party material in this article could be subject to other licenses (typically indicated in the credit line), and in this case, users are required to obtain permission from the license holder to reuse the material. 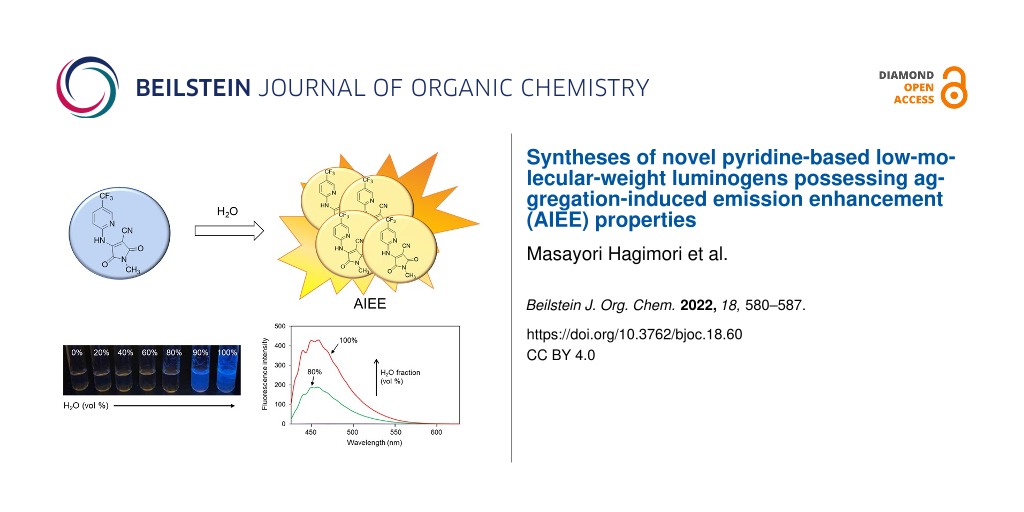