All articles from this author
Nesreen A. Safwat

Department of Chemistry, The University of Jordan, Amman 11942, Jordan

4Department of Chemistry, The University of Jordan, Amman 11942, Jordan

Microbial infections caused by Gram-negative and Gram-positive bacteria embarrass the health care system worldwide [1]. Pathogens such as Escherichia coli, Staphylococcus aureus, Klebsiella pneumoniae, and Staphylococcus pneumoniae were responsible for most of bacteremia deaths related to antimicrobial resistance in 2019 [2]. Current antibacterial drugs are facing various challenges, due to the inability to accumulate inside human cells made them inactive [3] and the development of multidrug resistant bacteria due to excessive use of antibiotics [2,4]. Heterocyclic compounds are the key components for drug design and synthesis. Among them, 1,3,4-oxadiazole derivatives are attractive and have been investigated for decades. This is due to their promising biological activities such as anti-COVID-19 [5], anticancer [6-8], antibacterial activity against Staphylococcus aureus and Bacillus subtilis [9,10], antifungal agents against Candida albicans and phytopathogenic fungi [11,12], and antiproliferative against different cell lines (e.g., PC3, HCT-116, and MCF7) [13]. In 2008, Muhi-eldeen et al, synthesized a hybrid compound with 1,3,4-oxadiazole moiety and pyrrolidine connected with propargylic moiety showed antibacterial activity against Staphylococcus aureus and E. coli [14]. On the other hand, the coupling of piperazine with heterocyclic compounds enhanced the biological activities like anticancer [15,16], antibacterial [17], antimalarial [18], anti-inflammatory [19], and lead to a promising scaffold for the treatment of Alzheimer’s disease [20]. Our previous work showed that a combination between cholic acid and heterocyclic scaffolds improved the antibacterial property (Figure 1) [21]. In 2018, Sharma et al. presented a new pyridinyl-substituted cholic acid analogue that was effective against an epidemic strain of Clostridium difficile (Figure 1) [22]. Recently, Chuchkov et al. prepared a hybrid structure between heterocycle penciclovir and cholic acid, and the product showed antiviral activity (Figure 1) [23]. In continuation of our ongoing research on designing compounds with potential biological activities, we herein report the design, synthesis, and antimicrobial assessment of novel cholyl 1,3,4-oxadiazole moieties (Figure 1).

For developing new drugs, cholic acid with its unique shape has attracted scientists’ attention by virtue of its non-toxic, natural human product, biodegradable, and amphiphilic properties. Cholic acid derivatives have been reported to have a wide range of activities such as antibacterial [21,24-26] and anticancer [27-29], and were used for ischemic stroke treatment [30], to decrease the cytotoxicity of anticancer drugs [31], and as amphiphilic copolymers as artificial ionophores [32].

The synthetic strategy for the synthesis of the desired compounds 4a–v commenced from commercially available cholic acid, which was converted to its cholyl hydrazide (1) as previously reported by us [21]. The produced cholyl hydrazide 1 was heterocyclized to 1,3,4-oxadiazole-2-thiol 2 in excellent yield (93%), via the treatment with carbon disulfide and trimethylamine in refluxing ethanol (Scheme 1) [33].

Having oxadiazole-2-thiol 2 at hands, the reactive thiol was subjected to the reaction with propargyl bromide and sodium carbonate as a base to afford the thiopropargylated derivative 3 in 82% yield after 24 h (Scheme 2) [33].

Compound 3 was the starting point for a Mannich reaction to generate a library of 22 diverse compounds. Briefly, the alkyne 3 was treated with formaldehyde, a secondary amine, and CuI as catalyst in DMSO (Scheme 3). The three components were stirred at room temperature for 3 h to furnish the desired compounds 4a–v in moderate to excellent yields [14,34].

By this route, diverse products derived from piperazine derivatives with aromatic electron-donating (4d), electron-withdrawing (4b, 4c, and 4f), and aliphatic groups (4g, 4i, and 4j) were obtained. Moreover, the reaction with secondary aliphatic amines with various alkyl chains afforded products 4r–u, whereas products 4o and 4p were obtained from piperidine and pyrrolidine, respectively, as secondary cyclic amine component (Figure 2).

The structures of the newly synthesized compounds were confirmed on the basis of their spectral data in particular nuclear magnetic resonance (NMR) and mass spectrometry (MS) techniques. The 1H NMR spectra (CDCl3) for the synthesized compounds showed complex protons in the aliphatic region which correspond to the cholyl moiety in the range of 1.3–2.0 ppm and aliphatic amine protons. The S–CH2 protons appeared as a singlet in all compounds at about δ = 4.00 ppm, the hydroxy protons were not observed in most of the compounds except for derivatives 4b, 4d, 4p, and 4u. All aromatic compounds showed resonances at δ = 6.50–8.00 ppm. Compounds 4b and 4c indicated the fluorine coupling effect on the aromatic protons. The carbaldehyde proton in compound 4h resonates at δ = 8.00 ppm, while compound 4k showed an amide doublet resonance at 7.09 ppm. On the other hand, the 13C NMR spectra showed all characteristic signals for all of the synthesized compounds, with multiple aliphatic peaks for the cholyl and aliphatic amine moieties. The fingerprint signals for the cholyl moiety (C–OH) were evident in all spectra of the synthesized compounds resonating at around δ = 68.0, 72.0, and 73.0 ppm. All aromatic compounds showed clear and correct carbon signals in the aromatic region. The two alkyne carbon atoms can be recognized for most of the compounds, while the other compounds had week signals. The two quaternary oxadiazole peaks appeared at around δ = 162.0 and 169.0 ppm. Compound 4f showed a carbonyl peak at δ = 196.7 ppm and for the carbaldehyde carbon in compound 4h a peak at δ = 160.8 ppm was observed. To further characterize the structures, 2D NMR experiments were done for compound 4p as example. The HMQC experiment revealed a correlation between the CH–O protons at 3.37, 3.79, and 3.91 ppm, and the carbon atoms at 72.0, 68.6, and 73.2 ppm, respectively. Moreover, the CH2S proton at 3.99 ppm correlated with carbon at 21.7 ppm. The methylene protons in -CH2-N-pyrrolidine at 3.51 ppm correlated with carbon at 42.7 ppm (see Supporting Information File 1). A COSY experiment for compound 4p showed long correlation between the two singlet methylene CH2S at 4.00 ppm and -CH2-N-pyrrolidine at 3.51 ppm (Supporting Information File 1).

The newly synthesized compounds were evaluated for their in vitro antibacterial potential against Staphylococcus aureus and Bacillus subtilis as examples of Gram-positive bacteria as well as against Escherichia coli and Proteus vulgaris as examples of Gram-negative bacteria [35]. They were also evaluated for their in vitro antifungal activity against the pathogenic fungal strains Aspergillus fumigatus and Candida albicans. The sensitivity of the organisms was assayed against the activity of tested compounds solutions (at 10 mg/mL concentration) using a modified agar well diffusion method with determination of the inhibition zone diameter in mm as criterion for antimicrobial activity. As shown by the results of antimicrobial activity testing (Table 1), the newly synthesized compounds revealed good in vitro antibacterial and antifungal activities. However, compounds 4t, 4i, 4p and 4c showed the highest activity against Gram-positive bacteria Staphylococcus aureus in the range of 33–36 mm. Similarly, it can be seen that compound 4p showed the highest activity (26.7 mm) against Gram-positive bacteria Bacillus subtilis followed by compounds 4i, 4o, 4j, 4q, 4r, 4g, 4m, 4c, 4t, 4h, 4d, 4l, 4b, 4e, 4s, 4k, 4u, and 4a, respectively (Table 1). Furthermore, compound 4d showed the highest activity against Gram-negative bacteria Proteus vulgaris followed by compounds 4c, 4t, 4b, 4n, 4s, 4l, 4p, 4q, 4i, 4o, 4g and 4j, respectively. All tested compounds exhibited lower activities compared to the tested reference drugs.

aThe data are expressed as inhibition zone diameter (mm) in the form of mean ± standard error (where well diameter 6 mm); n.a.: not active. bKetoconazole and gentamycin were used (at 1 mg/mL conc.) as standard drugs against the tested fungi and bacteria, respectively.

The antimicrobial efficiency of the tested compounds was confirmed by the MIC values measured by the broth microdilution method by recording the lowest concentration that showed inhibition of microbial growth (Table 2). The results of the determined MIC values showed the same trend of the antimicrobial activities explored by determination of the inhibition zone diameter using the agar well diffusion method.

The structure–activity relationship (SAR) elaborated that piperazines with aliphatic groups on the nitrogen atom are more active than those with aromatic substituents against the fungus C. albicans. On the other hand, compounds comprising piperazines with fluorinated aromatic (4b and 4c), a pyridinyl moiety (4e), and an alkylated piperazine (4i and 4j) were more active against S. aureus as well as derivatives with dialkylamino substituents with alkyl groups containing <5 carbon atoms (4q, 4r, 4s, and 4t) and pyrrolidine (4p). According to the MIC values piperazines with a methyl group (4i) and compounds with cyclic amines (4o and 4p) were the most active against B. subtilis. Compounds 4a, 4e, 4h, 4k, 4m, 4u, and 4v showed no activities against the tested Gram-negative bacteria under these screening conditions (Table 2).

A new chemical library based on the hybridization of cholic acid with the heterocyclic moiety 1,3,4-oxadizole was synthesized. All new compounds were unambiguously characterized by various spectroscopic techniques. The newly synthesized compounds were assessed in vitro for their antimicrobial activities. Compounds 4g and 4i showed good antifungal activity against C. albicans. Compounds 4t, 4i, 4p, and 4c were the most active derivatives against S. aureus with MIC values between 31 and 70 µg/mL, while compound 4p showed good activity against Bacillus subtilis with a MIC value of 70 µg/mL. Further development of this library will be reported in due course.

The authors acknowledge the generous funding from Deanship of Scientific Research, Al-Balqa Applied University, grant no. 864/2019/2020 and the Center of Advanced Material/RISE at the University of Sharjah, UAE, for logistic support.

© 2022 Rasras et al.; licensee Beilstein-Institut.
This is an open access article licensed under the terms of the Beilstein-Institut Open Access License Agreement (https://www.beilstein-journals.org/bjoc/terms), which is identical to the Creative Commons Attribution 4.0 International License (https://creativecommons.org/licenses/by/4.0). The reuse of material under this license requires that the author(s), source and license are credited. Third-party material in this article could be subject to other licenses (typically indicated in the credit line), and in this case, users are required to obtain permission from the license holder to reuse the material. 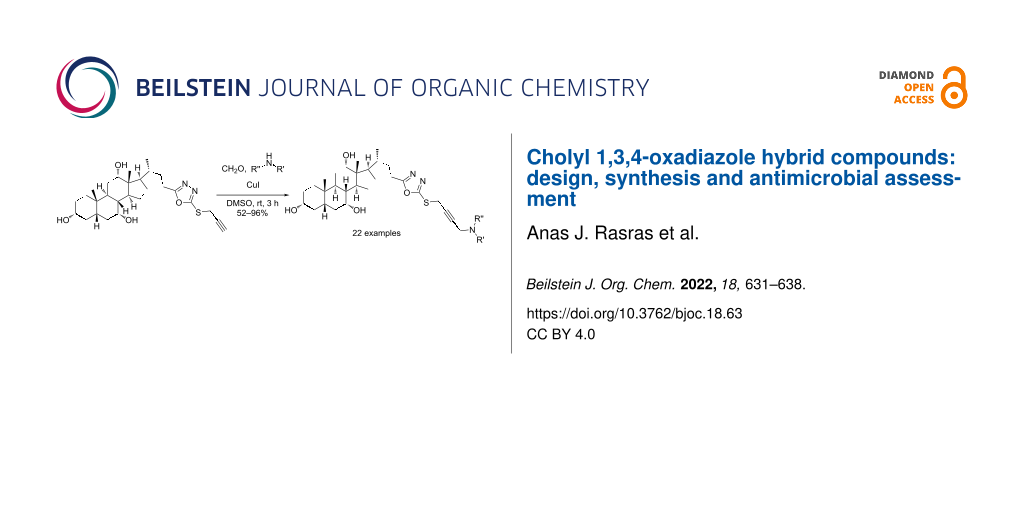