All articles from this author
Bin Lv


All articles from this author
Pan Gao


All articles from this author
Xiaodong Jia


All articles from this author
Yu Yuan

An efficient Cu-catalyzed strategy for the direct C–H amination of arenes in high yields using N-hydroxyphthalimide as the amidyl radical precursor under air is reported. A possible mechanism is proposed that proceeds via a radical reaction in the presence of CuBr and triethyl phosphite.

Practical methods for constructing C–N bonds are in high demand in organic synthesis since nitrogen-containing organic compounds are widely used in biologically active substances [1], multifunctional materials [2,3], and metal ligands [4,5]. Among them, the synthesis of aromatic amines has been important to researchers in recent decades. With the combination of C–H activation, many aminations of aryl compounds have been established [6-16].

Next, we investigated the phthalimidation of various arenes 1 with N-hydroxyphthalimides 2 under the optimized conditions (Scheme 2). All the arenes tested, including mono-, di-, and tri-substituted aromatics and furans, reacted with N-hydroxyphthalimide (2a) smoothly to afford good yields of the corresponding products. Anisole was well tolerated in this reaction and gave the phthalimide product 3b in 75% yield, mainly as ortho- and para-substituted products. Electron-donating alkyl-substituted arenes were generally more prone to give ortho and para products. When the reaction was carried out with cumene under standard conditions, due to steric hindrance resulting from the alkyl group on the arene’s ring, only the single product 3d was observed in 55% yield. At the same time, arenes containing electron-withdrawing groups (such as halogen and trifluoromethyl) also give the corresponding products 3e–h in moderate yields with the meta substituted isomers as the major products. Interestingly, only the meta product was detected when (trifluoromethyl)benzene was treated with 2a. Moreover, benzyl chloride and benzyl bromide tolerated the reaction conditions, affording the aryl-phthalimidated products of which the ortho and para products were the major isomers. It is also shown that disubstituted and trisubstituted arenes successfully reacted to give the corresponding products in good yields. In addition, employing furan as the substrate, imidation occurred only at the ortho position to provide 3q with a moderate 33% yield. Finally, various substituted N-hydroxyphthalimides were studied (Scheme 3), and the desired N-phthalimide products 3r–u were obtained in moderate to high yields.

According to the experimental results and our previous work [27,28], a possible reaction mechanism is given in Scheme 4. At first, NHPI combines with triethyl phosphite to form intermediate 4, which is the loss of ethanol to generate intermediate 5. Then, single-electron transfer (SET) between CuBr and intermediate 5 forms intermediate 6, which initiates the N–O bond homolytic cleavage resulting in forming an N-centred phthalimidyl radical 7 (PhthN•) and anion 8. Meanwhile, Cu(I) is oxidized to Cu(II) in this step. Next, radical 7 attacks the benzene via radical addition to generate the intermediate 9, which is oxidized by Cu(II) to give 10, which undergoes aromatization and deprotonation to afford the product 3a. At this stage, Cu(I) is regenerated to complete the catalytic cycle.

In summary, we have developed a convenient copper-catalyzed method for the direct C–H amination of arenes in good yields using N-hydroxyphthalimides as the amido radical precursor under mild conditions. This reaction has a broad substrate scope and leads to moderate to good yields in most cases. Also, good chemoselectivities were observed with some substrates. It is envisaged that this work will provide a simple amination strategy for synthesizing aromatic amines.

All new compounds were fully characterized. 1H NMR and 13C NMR spectra were obtained with Agilent Technologies AVANCE-400 MHz or 600 MHz spectrometers in CDCl3 as the solvent with TMS as an internal standard. Mass spectra were obtained on a Bruker Dalton maXis instrument. All reactions were carried out under air. Unless otherwise noted, materials were obtained from commercial suppliers and were used without further purification. All reactions under standard conditions were monitored by thin-layer chromatography (TLC) on gel F254 plates. Flash column chromatograph was carried out using 300–400 mesh silica gel at medium pressure.

General procedure for synthesis of 3a–u: N-Hydroxyphthalimide (0.1 mmol), CuBr (40 mol %, 0.04 mmol), triethyl phosphite (6.0 equiv, 0.6 mmol) and (hetero)arene (2 mL) were added into a 15 mL sealed tube. The resulting mixture was stirred at 100 °C under air for 12 h, and the progress was monitored by TLC. The solution was then cooled to room temperature and the solvent was removed under vacuum. The crude residue was purified by column chromatography on silica gel (ethyl acetate/petroleum ether 1:10) to afford the desired products 3a–u.

© 2022 Zhang et al.; licensee Beilstein-Institut.
This is an open access article licensed under the terms of the Beilstein-Institut Open Access License Agreement (https://www.beilstein-journals.org/bjoc/terms), which is identical to the Creative Commons Attribution 4.0 International License (https://creativecommons.org/licenses/by/4.0). The reuse of material under this license requires that the author(s), source and license are credited. Third-party material in this article could be subject to other licenses (typically indicated in the credit line), and in this case, users are required to obtain permission from the license holder to reuse the material. 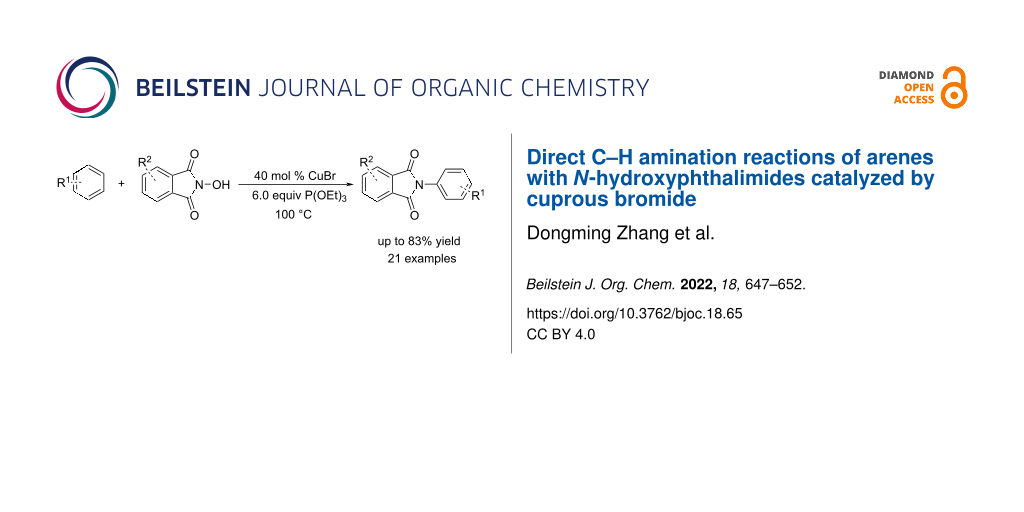