All articles from this author
Tomohiro Michitaka


All articles from this author
Akihito Hashidzume

In this study, we have used reverse micelles of anionic aerosol OT (AOT), nonionic triton X-100 (TX), and cationic hexadecyltrimethylammonium bromide (CTAB) (Scheme 1). Before investigating the formose reaction, the sizes of water pools of the reverse micelles formed from the surfactants were evaluated under several conditions (see Supporting Information File 1). In the cases of AOT and CTAB, the radius of the water pools (Rw) was evaluated by dynamic light scattering, whereas, in the case of TX, Rw was estimated by the fluorescence quenching technique. As can be seen in Supporting Information File 1, Figure S1, Rw for AOT and CTAB is almost proportional to the molar ratio of water to surfactant, w (= [water]/[surfactant]), independent of the temperature. At w = 10, AOT and CTAB reverse micelles contain water pools of Rw ≈ 3 and 2 nm, respectively. On the other hand, Rw for TX is nearly constant at ca. 1 nm independent of w and temperature.

The formose reactions were carried out at 60 °C by mixing a 100 mM solution of a surfactant in isooctane or in a mixed solvent of isooctane and 1-hexanol (5:1, v/v) and an aqueous solution containing 200 mM formaldehyde and 20 mM calcium hydroxide to adjust w to 10. After predetermined times, aliquots of the reaction mixture were taken and neutralized with 100 mM hydrochloric acid to terminate the reaction. The remaining unreacted formaldehyde was then extracted with water several times. Using the combined water phase, the concentration of unreacted formaldehyde was determined by the acetylacetone method [18,19] to evaluate the conversion of the formose reaction. Figure 1 demonstrates the time–conversion plots for the formose reactions in water pools of AOT, TX, and CTAB reverse micelles and that in an aqueous solution. In the formose reaction in an aqueous solution, i.e., a reference experiment, after an induction period of 0–50 min, the conversion commenced to increase rapidly and reached a quantitative conversion at 75 min. In the formose reactions in AOT, TX, and CTAB reverse micelles, on the other hand, no induction period was observed, indicative of acceleration of the formation of glycolaldehyde. The acceleration was most remarkable in the case of AOT reverse micelles. It is noteworthy that the conversion levelled off and did not reach a quantitative yield. The saturated conversions were ca. 65, ca. 35, and ca. 25% for AOT, TX, and CTAB reverse micelles, respectively [20]. On the basis of these observations, AOT provides the most efficient medium for the formose reaction among the surfactants examined in this study.

The formose reaction in water pools of AOT reverse micelles were investigated at varying w and temperatures. Figure 2 shows time–conversion plots for AOT reverse micelles of different w at 30, 45, and 60 °C. This figure indicates that there is no induction period at all the w and temperatures examined. It should be noted here that the saturated conversion is lower at a larger w. Given a second order reaction for formaldehyde, the time–conversion plots were analyzed by

where Conv and Convmax denote the conversion at time t and the saturated conversion, respectively, and k2 and c0 are the pseudo-second-order rate constants and the initial concentration of formaldehyde (= 200 mM), respectively [21]. As can be seen in Figure 2, the best fitted curves agree well with the experimental data. Values of Convmax and k2 obtained from the fitting were plotted in Figure 3 against w at different temperatures. This figure indicates that both Convmax and k2 decrease with increasing w at all the temperatures examined, indicating that the formose reaction proceeds more efficiently in AOT reverse micelles of a smaller w. Since the formose reaction did not proceed in aqueous solutions at 30 °C and the same concentrations of formaldehyde and calcium hydroxide, it is concluded that the water pools of AOT reverse micelles act as an effective medium for the formose reaction.

It is important to characterize the product of the formose reaction in AOT reverse micelles. However, it was not possible to purify the product because the reaction mixture contained a large amount of AOT. After a large fraction of AOT was removed, the mixture obtained was measured by high-performance liquid chromatography, NMR spectroscopy, and mass spectrometry, but no signals ascribable to the products, i.e., sugars or sugar alcohols, were observed because of the residual AOT. The formose reaction was thus carried out in AOT reverse micelles of w = 5 using formaldehyde-13C as starting material at 30, 45, and 60 °C for 60 min, and the product was characterized by 13C NMR after removal of a large fraction of AOT (see Supporting Information File 1). Figure 4 compares 13C NMR spectra for the products of the formose reaction carried out using formaldehyde-13C at 30, 45, and 60 °C. In these spectra, signals at 1.5 and 119.5 ppm are due to the methyl and nitrile carbons in acetonitrile, the internal standard, respectively. All the spectra contain two intense signals at ca. 63 and 75 ppm, although the ratios of signal intensities are different at different temperatures. The signal at ca. 63 ppm can be assigned to ethylene glycol, which may be derived from glycolaldehyde through Cannizzaro reaction. (We could not assign the signal at ca. 75 ppm comparing to signals for various sugar and sugar alcohols.) On the basis of these spectra, we can conclude that ethylene glycol is formed as a major product.

The authors would like to express their acknowledgment to Professor Takahiro Sato, Department of Macromolecular Science, Graduate School of Science, Osaka University, for his technical support and fruitful discussion. This work was partly supported by JSPS Kakenhi Grant Numbers JP23550137, JP26288061.

© 2016 Masaoka et al.; licensee Beilstein-Institut.
This is an Open Access article under the terms of the Creative Commons Attribution License (http://creativecommons.org/licenses/by/4.0), which permits unrestricted use, distribution, and reproduction in any medium, provided the original work is properly cited.
The license is subject to the Beilstein Journal of Organic Chemistry terms and conditions: (http://www.beilstein-journals.org/bjoc) 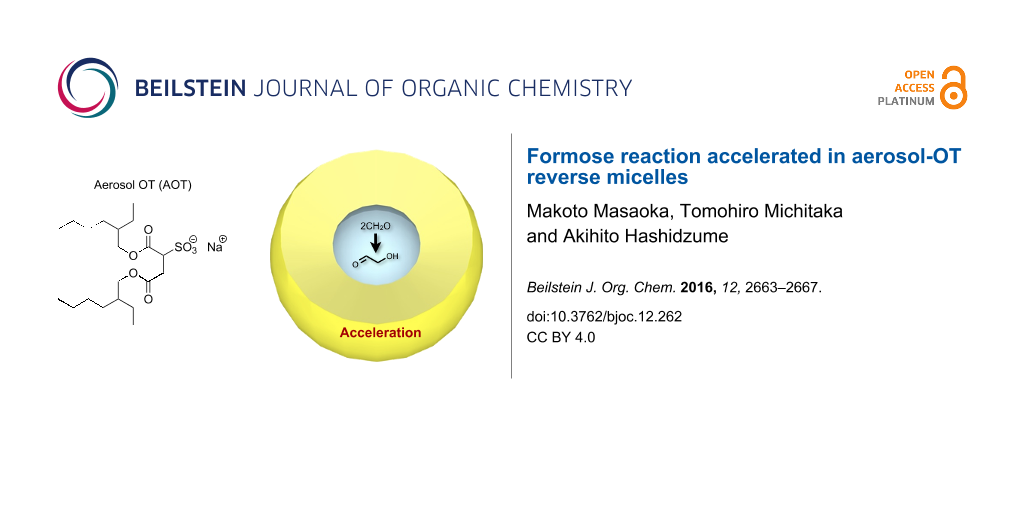