Allylsilanes in the synthesis of three to seven membered rings: the silylcuprate strategy


All articles from this author
Francisco J. Pulido


All articles from this author
M. Carmen Sañudo

Organosilicon compounds and in particular allylsilanes have attracted considerable attention due to the increasing number of new methodologies that allow useful synthetic transformations. [1,2] Over the last decade allenes have emerged as one of the best sources for the synthesis of allylsilanes. [3] Although unactivated allenes do not easily undergo organometallic addition – and do not react with carbocuprates – they are readily attacked by metallocuprates. [4] In particular, simple allenes react with silylcuprates and stannylcuprates giving rise to a great variety of allyl- and vinylsilanes and stannanes with different substitution patterns. [5,6] The stoichiometry of the silylcuprate (higher or lower order) is responsible for the final regioselectivity of the reaction, leading selectively to allylsilanes when a lower order cyanosilylcuprate (R3SiCuCNLi) is used. [7] Moreover, the high reactivity of the intermediate allylsilane-vinylcuprate species toward electrophiles increases their synthetic potential (Scheme 1). [7,8]

A large number of electrophiles (alkyl and allyl halides, epoxides, ketones, α,β-unsaturated oxo compounds and acid chlorides, unsaturated nitriles and imines) have been successfully used in this reaction, leading to a wide range of functionalised allylsilanes, which are valuable intermediates for carbocyclic annulations. Effectively, the former substrates (containing a nucleophilic allylsilane unit and an electrophilic function) undergo "intramolecular allylsilane terminated" cyclizations when treated with Lewis acid, affording cyclic structures of different size.

In this account, we show a general survey of the recent advances in allylsilane chemistry and their significance as precursors for the synthesis of three to seven membered rings. We also highlight the contribution of our group to this field.

Phenyldimethylsilylcyanocuprate 1, prepared by mixing one equivalent of phenyldimethylsilyllithium and one equivalent of copper(I) cyanide, reacts with 1,2-propadiene (bubbled from lecture bottles) at -40°C leading to the intermediate copper species 2, which on quenching with D2O undergoes deuterio-decupration introducing deuterium exclusively in the vinylic position C-2. As mentioned in the introduction, the use of lower order cuprates such as silylcyanocuprate 1 leads selectively to allylsilanes. Trapping of the intermediate vinylcuprate 2 with α,β-unsaturated oxocompounds provides an easy entry to the synthesis of oxoallylsilanes 3–8 which are useful synthons for cyclopentane annulations (Scheme 2). [7,9] Acid chlorides react with 2 affording divinyl ketones 9–10.

Allylsilanes 3–8 carrying an electrophilic carbonyl moiety readily undergo intramolecular cyclization under Lewis acid catalysis. [10] Thus, silicon assisted cyclization of oxoallylsilanes 3–8 in the presence of TiCl4 or EtAlCl2 results in the formation of 3-methylene-1-cyclopentanols 11–14 with a high degree of stereocontrol (Scheme 3). [7] The cis stereochemistry observed in 11 might indicate a preference for a transition state where the bulky groups attain an equatorial conformation for minimal repulsions. Moreover, the reaction shows a high level of stereoselectivity in the formation of fused bicyclopentanols. Cyclization seems to proceed through a classical SE mechanism involving stabilized carbocations β to silicon (the so-called β-effect). A unique feature of the reaction is the invariable formation of an exocyclic double bond by loss of the silicon group. The methylenecyclopentanol moiety is present in the skeleton of some naturally occurring terpene families.

Recent work has shown that the nature of the silyl group may cause important modifications in the mechanism pathway and therefore may change the final outcome. This is the case of analogous allylsilanes bearing the bulky t-butyldiphenylsilyl group, which give 3-cyclopenten-1-ols maintaining the hindered silyl group. [11,12]

The reaction between 2 and α,β-unsaturated acid chlorides provides an easy approach to silylated divinyl ketones 9–10 (Scheme 2), which are excellent precursors for silicon-directed Nazarov cyclizations. Acid catalysed electrocyclic closure (TFA, 0–20°C) allows the formation of exocyclic 2-methylenecyclopentan-1-ones 15–16 (Scheme 3), which are not easily prepared by classical methods, and for which few methods of synthesis have been reported in the literature. [7,13]

The diastereoselectivity of the reaction depends on the Lewis acid used. Boron and aluminum-based catalysts show a preference for the cis isomer (29b and 30b) whereas TiCl4 gives almost exclusively trans isomers (29a and 30a). According to Schlosser, the preference for the cis isomer, when BF3 is used, might be due to the countercurrent flow of electrons in the Csp2-C(Si) and C = O bonds, which is favoured when these structural elements are aligned parallel. [16]

Oxoallylsilanes 4–7, 33 and 34, readily available via silylcuprate addition of 2 to enones, react with CH2I2/Me3 Al at low temperature (-60°C to room temperature, then 48 h at r.t.) giving spiro-cyclopropanes 35–39 containing the spiro[2,4]heptanol moiety (Scheme 7). [20] High levels of stereoselectivity were found in all the examples studied. Formation of the spirocycle proceeds by a two-step pathway involving firstly, Me3Al-catalysed intramolecular cyclization of the oxoallylsilane and subsequent formation of a methylenecyclopentanolate, and then cyclopropanation. This unique mechanism enables the construction of hydroxylated bi-tri- and tetracyclic skeletons, bearing the spiro-cyclopropane moiety, from open chain allylsilanes in just one step. The high stereocontrol associated to the ring formation allows the synthesis of enantiomerically pure spiro-tricyclic alcohols containing an angular OH-group, such as 38 (Scheme 7). [20]

The use of reagents different from organoaluminun compounds resulted in poor efficiency and low stereoselectivity. For example, the Simmons-Smith reagent or the Furukawa modification (Et2Zn/CH2I2) is much less effective than the reported procedure. [21]

Unfortunately, this route cannot be used to synthesize spiro[2,5]octanes from epoxyallylsilanes of the type 23, due to the high reactivity of the epoxide group towards Me3Al, the latter giving SN1 attack resulting in the formation of methyl alcohols to a great extent. Future work will show if cyclopropanating reagents with a weaker Lewis acid character can be appropriate to direct the reaction toward the synthesis of spiro[2,5]octanes, an structural moiety of interest in the synthesis of natural products.

Alcohols as 40 containing an allylsilane unit, which can be readily obtained by reaction of epoxides with the silylcuprate 2, are excellent synthons for cyclobutane ring-formation. Formation of the corresponding mesylate and fluoride-induced intramolecular displacement led to methylenecyclobutanes 41 in good yields (Scheme 8). [22]

A different approach, starting from acetylenes instead of allenes and using silyl- or stannylcuprates followed by addition of an epoxide as electrophile, led to substituted cyclobutenes after cyclization of the vinylsilane or vinylstannane intermediate. [23] Cyclization of the corresponding vinylsilanes gave poor results of no synthetic utility, however the vinylstannane strategy results in formation of 1- and 3-substituted cyclobutenes 42 and 43 in good yield (Scheme 9).

As shown in Scheme 9, the strategy employed allows the selective formation or 1- or 3-substituted derivatives, where the coupling of a C2 acetylenic synthon and a C2 epoxide synthon provides a new and useful [2+2] annulation strategy for the preparation of the strained cyclobutene ring. The key step is the syn addition of the tin cuprate to the acetylene, which controls the cis stereochemistry required for cyclization. [23]

The use of nitriles and imines as electrophiles in the silylcupration of allene provides new alternatives for carbocyclization. Recently, we showed that α,β-unsaturated nitriles undergo a double addition process when treated with the cuprate species resulting from addition of 1 to allene, giving ketones 44 containing both an allylsilane group and a vinylsilane moiety (Scheme 10). [24] Equilibration between species 2 and 45 as the temperature rises from -70°C to 0°C must be the explanation for this surprising result. Whatever is the reason, this tandem process allows the introduction of two silylated functions, which display a markedly different reactivity. Effectively, allylsilane terminated cyclization, in the same conditions as before (see Scheme 3), gives chemoselectively methylenecyclopentanols, while the vinylsilane unit remains unchanged (Scheme 10). [24] Recent work revealed that addition one equivalent of organolithium reagent (R1Li) to the reaction mixture leads to the formation of ketones of type 46 (Scheme 10), which result from the addition of the two organometallic species present in the solution (silylcuprate and R1Li). When R1Li is an alkenyllithium this reaction opens new alternatives for preparation of 7-membered rings by intramolecular Michael addition of the allylsilane group to the enone (Scheme 10).

Similarly, silylcupration of imines [25] provides a simple and efficient route for the preparation of seven membered carbocycles with different substitution patterns. Thus, reaction of 2 with α,β-unsaturated imines, at low temperature, affords allylsilane-containing aldehydes 47, which upon addition of vinylmagnesium bromide followed by Swern oxidation lead to enones 48. Lewis acid catalysed cyclization of 48 gives methylenecycloheptanones 49 in high yield (Scheme 11). [25] Consequently, oxoallylsilanes 47 can be considered as useful precursors for cycloheptane annulation. Moreover, the presence of an exocyclic double bond joined to the cycloheptanone core is a structural feature very common in many naturally occurring terpenes (Scheme 11).

Other allylsilane-based strategies have been recently developed to build up cycloheptane derivatives. Thus, the synthesis of seven membered hydroxycycloalkenes and oxacycloalkenes has been achieved by intramolecular cyclization of functionalised allylsilanes obtained from optically active allylic alcohols (Scheme 12). [26]

In summary, the metallocupration (Si-Cu and Sn-Cu) of allenes and acetylenes has proven to be extremely useful for the construction of cyclic structures ranging from three to seven membered rings, through processes which imply addition of the intermediate silylcuprate to an electrophile (enone, epoxide, nitrile, imine, etc) followed by Lewis-acid catalysed intramolecular cyclization, where the electrophile used determines the type of process and the size of the ring.

This paper is dedicated to Professor Miguel Yus Astiz on occasion of his 60th birthday.

© 2007 Barbero et al; licensee Beilstein-Institut
This is an Open Access article under the terms of the Creative Commons Attribution License (http://creativecommons.org/licenses/by/2.0), which permits unrestricted use, distribution, and reproduction in any medium, provided the original work is properly cited.
The license is subject to the Beilstein Journal of Organic Chemistry terms and conditions: (http://www.beilstein-journals.org/bjoc) 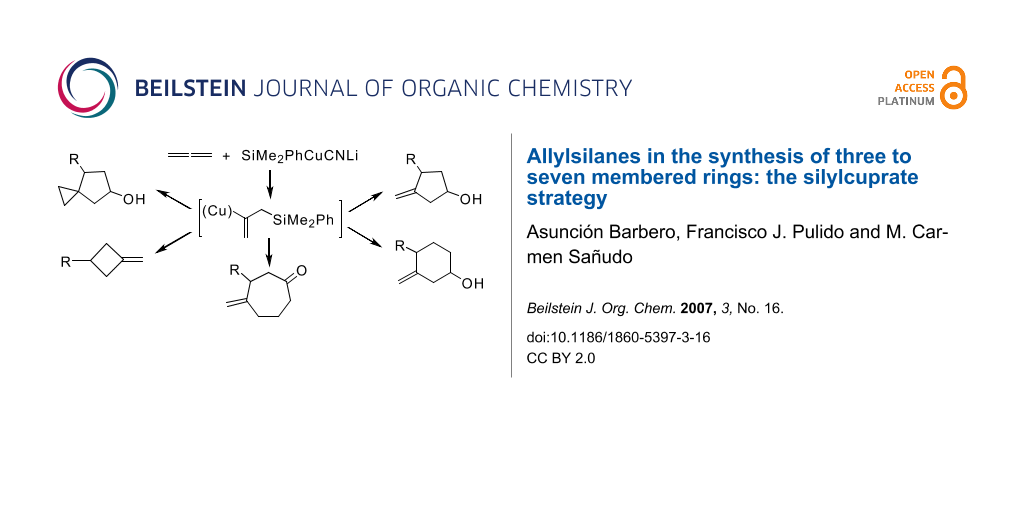