All articles from this author
Ryoji Soma


All articles from this author
Yoshimasa Yamamoto


All articles from this author
Toshiyuki Kamei


All articles from this author
Kenichiro Itami

An organosilicon cation stabilized by intramolecular pyridyl coordination was effectively generated and accumulated by oxidative Si-Si bond dissociation of the corresponding disilane using low temperature electrolysis, and was characterized by NMR and CSI-MS.

We have recently developed the "cation pool" method, which involves the irreversible oxidative generation and accumulation of highly reactive cations in the absence of nucleophiles [1-5]. Heteroatom-stabilized carbocations, such as N-acyliminium ion pools and alkoxycarbenium ion pools have been generated based on oxidative C-H, C-Si, and C-S bond dissociation. Very recently, the oxidative C-C bond dissociation has been found to be effective for generation of a pool of a carbocation having a stabilizing group as shown in Scheme 1[6].

29Si NMR chemical shifts of 1b and 1d were similar to those of 1a and 1c, indicating that no coordination of the pyridyl groups on silicon existed in the neutral molecules (Supporting Information File 1). Therefore, the significant effect of the 2-pyridyl group on the oxidation potential may be ascribed to effective intramolecular coordination to stabilize the radical cation intermediate. The conformationally less flexible 2-pyridylphenyl group seems to be more effective than the 2-pyridylethyl group.

The intramolecular coordination in the radical cation is supported by the DFT calculations as shown in Figure 2. It is also important to note that such coordination elongates the Si-Si bond and facilitates its dissociation.

Preparative electrochemical oxidation of 1d was carried out to generate and accumulate the corresponding organosilicon cation 3d (Scheme 3). Nature of the counter anion was very important. When 1d was oxidized in the presence of Bu4NBF4, which is a common supporting electrolyte for the "cation pool" method, fluoride was introduced on the silicon atom. Eventually, Bu4NB(C6F5)4 was found to be an appropriate supporting electrolyte to generate and accumulate the organosilicon cation 3d.

The 1H NMR spectrum of the solution obtained by the electrochemical oxidation of 1d in CH2Cl2 (containing 10% CD2Cl2) using Bu4NB(C6F5)4 at 0°C showed complete conversion of disilane 1d to one species, i.e. organosilicon cation 3d. The Si-CH3 groups in 3d exhibited a signal at 0.87 ppm, whereas those in 1d were observed at -0.05 ppm. Significant low field shift of the protons on the pyridyl ring was also observed. 3d exhibited a 29Si signal at 37.7 ppm [26-28]. These results strongly suggest the generation of an electron deficient silicon species. Therefore, it is reasonable to consider that the organosilicon cation stabilized by the pyridyl coordination was generated.

The formation of organosilicon cation 3d was also confirmed by CSI-MS (cold-spray ionization mass spectroscopy) (spray temperature; 0°C) [29]. The parent peak was observed at M/Z = 212.08963 (Calcd: 212.08955) as shown in Figure 3. A complex of 3d with HF was also observed, although the mechanism of its formation is not clear at present.

The mechanism shown in Figure 4 seems to be reasonable. The initial one-electron oxidation of disilane 1d gives radical cation 2d. The pyridyl coordination in the radical cation facilitates the electron transfer. In the next step, the dissociation of the Si-Si bond in radical cation 2d takes place to give organosilicon cation 3d and silyl radical 4d. DFT calculations indicated that the pyridyl group coordination to silicon takes place both in cation and radical. Radical 4d seems to be easily oxidized on the surface of the electrode to give cation 3d. Therefore, two moles of 3d should be formed from one mole of 1d by net two-electron oxidation.

The organosilicon cation 3d can be trapped by p-tolylmagnesium bromide as a nucleophile and the corresponding product 5d was obtained in 90% yield based on disilane 1d (Scheme 4) [30]. The observation indicates that two moles of the cation is formed from one mole of the disilane with the consumption of two moles of electrons, being consistent with the mechanism shown in Figure 4.

Effective formation of 5d indicates that organosilicon cation 3d acted as a silicon centered cation. The carbon nucleophile attacked the silicon atom selectively, although a positive charge should also be delocalized on the nitrogen atom.

The present observations speak well for possibilities of the "cation pool" method in organosilicon chemistry. Donor-stabilized organosilicon cations can be effectively generated and accumulated at 0°C by the electrochemical oxidative Si-Si bond dissociation. It is also noteworthy that the presence of a donor ligand on the silicon atom facilitates the oxidation. Further work aimed at generating other organosilicon cations and exploring their stability and reactivity is currently in progress.

This work was partially supported by the Grant-in-Aid for Scientific Research, Japan. Y. Y. is a recipient of the JSPS Postdoctral Fellowships for Young Scientists.

© 2007 Nokami et al; licensee Beilstein-Institut
This is an Open Access article under the terms of the Creative Commons Attribution License (http://creativecommons.org/licenses/by/2.0), which permits unrestricted use, distribution, and reproduction in any medium, provided the original work is properly cited.
The license is subject to the Beilstein Journal of Organic Chemistry terms and conditions: (http://www.beilstein-journals.org/bjoc) 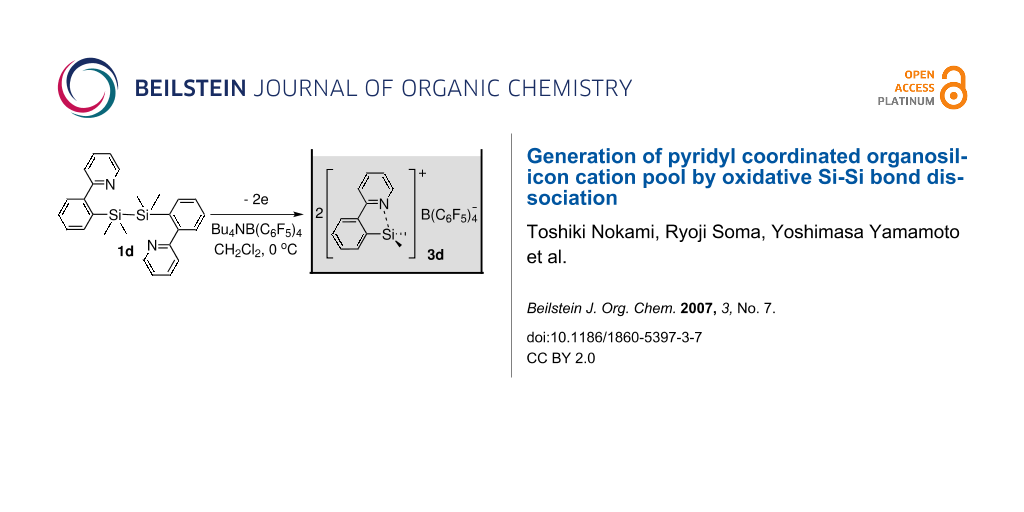