All articles from this author
Jörg M. Neudörfl

The antimalaria-active molecule artemisinin (1) is a naturally occurring sesquiterpene peroxide with remarkable pharmacological properties. Hydrophilic as well as lipophilic derivatives have been prepared from artemisinin and show improved antimalarial properties and better bioavailabilities [1-5]. In recent years, additional medicinal properties of artemisinin and the water soluble artesunates have been discovered such as activities against several cancer cell lines, schistosomiasis and antiviral properties [6,7]. The introduction of substituents into the central peroxide ring system as well as further ring annulation are straightforward approaches for the preparation of other active derivatives which might show promise in overcoming the forthcoming problem of artemisinin resistance [8]. From a synthetic point of view, the preparation of the pharmacophore, the central 1,2,4-trioxane ring system, is possible by a number of strategies [9,10]. We, for example, have previously reported the use of the singlet oxygen ene reaction of allylic alcohols as a route to ß-hydroperoxy alcohols that can be transformed into 1,2,4-trioxanes by reaction with carbonyl compounds in the presence of Lewis acids [11]. This approach leads to simple cyclic peroxides (e.g. 2) which in some cases show similar antimalarial effects as the natural compound (Figure 1) [12]. An apparently useful structural feature is a large 3,3-spirofused hydrophobic group. The adamantane skeleton is a unique motif in other cyclic peroxides with antimalarial activities [13,14] which additionally exhibit other remarkable pharmaceutical properties [15-17]. In this publication we report the use of the alcohols 3 and 6 to explore further the synthetic approach to spirocyclic fused 1,2,4-trioxanes with a series of other spirofused ring structures.

The photooxygenation reactions via sensitization of triplet oxygen with meso-tetraphenylporphyrin (TPP) were performed in polystyrene beads under solvent-free conditions (Scheme 1) [18,19]. Numerous applications of the hydroperoxides 4 and 7, that result from the singlet oxygen ene reactions, have already been reported [20,21]. In context with our work on bis-peroxide synthesis from bifunctional ketones [22], we have also studied the peroxyacetalization of the allylic hydroperoxide 7 with the bifunctional cyclohexane-1,4-dione (CHD, Scheme 2). In this case, one equivalent of the diketone gave the monoadduct 9c in 20% yield.

The products from the reaction of monofunctional ketones with ß-hydroperoxy alcohols 4 and 7 are collected in Table 1. All trioxanes 5a–e derived from 4 were crystalline and could be analyzed by X-ray structure analysis (Figure 2). The bond lengths of the crucial O-O bond were similar in all cases with the exception of the adamantane derivative 5d which has a remarkably shorter O-O bond distance.

The 1,2,4-trioxanes 10 were formed in moderate to good yields, with the Hock-type cleavage product from the ß-hydroperdiol as the only side-product, from 4 and substituted benzaldehydes under BF3-catalysis in CH2Cl2 solution (Scheme 3). In all cases the trans products were formed in high (>98:2) diastereoselectivities. All compounds could be crystallized from acetone or from the neat liquid. In the crystal the central 1,2,4-trioxane ring is almost undistorted in a cyclohexane chair conformation with the acrylate and the aryl substituents in equatorial positions (Figure 3). In the crystal lattice the compounds, especially the 4-halophenyl-substituted trioxanes, tend to form π-stacked stabilized chain structures with channels that are filled with water molecules (Figure 4). In the elementary cell of the 4-chloro derivative 10c, an average of 320 Å3 of channel space corresponds to one water molecules per trioxane molecule. By contrast, the 4-trifluormethyl derivative 10f crystallized in a compact chain-like package of anti-parallel arranged pairs of trioxanes.

The orientation of the aryl groups relative to the 1,2,4-trioxane equator depends largely on the nature of the para-substituent: in the phenyl-substituted trioxane 10a and in the para-halogenated analogs 10b–10d, the aryl group is nearly coplanar with the C(3)-H bond, whereas in the 4-nitro-, 4-trifluoromethyl-, and 4-cyano compounds 10e–10f coplanarity of the aryl substituent with the O(4)-C(3) bond of the trioxane chair was observed (Table 2 and for numbering Figure 5).

In the artemisinin-derived arthemether (AM), the central trioxane ring has a twist-boat conformation resulting from the additional propylene bridge connecting C-3 and C-6. In Table 3 the yields of the peroxyacetalization reactions, the characteristic 13C NMR shifts of the peracetal carbon C-3 and two significant bond lengths are listed. It is clear that the electronic nature of the substituent on the aryl group does not significantly change the bond length of the central peroxide bond (mean value: 1.479 Å). The mean value of the characteristic 13C NMR shift of the peroxyacetal carbon C-3 is 103.4 ppm. The bond length of the central oxygen-oxygen bond in arthemether as determined by an independent structure analysis is 1.472(1) Å.

More pronounced bond lengths effects were observed for the O2-C3 ring bonds that range from 1.39 to 1.45 Å. Analysis of the Cambridge crystallographic data file revealed that the mean oxygen-oxygen (O1-O2) bond distance for 1,2,4-trioxanes (108 compounds) is 1.472 Å with a narrow distribution ranging from the extremes 1.460 (3 compounds) to 1.482 (4 compounds). All compounds 10a–h investigated by us fall into this range, 10a,g,h showing the longest O1-O2 bond distances. With regards to antimalarial activity, all 4-arylated 1,2,4-trioxanes exhibited low in vitro activities (EC50/plasmodium falciparum > 50 μM) with the nitro-substituted compound 10e as the most active derivative (EC50 = 48 μM) [25]. Thus, the peroxide bond lengths do not correlate with biological activity, cf. the highly active AM and the fluoro compound 10b.

In summary, we have reported the synthesis of a series of six-membered ring 3,3-spiroannulated 1,2,4-trioxanes from methyl 4-hydroxytiglate and from mesitylol, respectively, by the singlet oxygen ene reaction and subsequent peroxyacetalization. A series of 4-arylated 1,2,4-trioxanes from methyl 4-hydroxytiglate was obtained by the same protocol. These compounds were fully characterized by spectroscopic methods and by X-ray structure determination.

We thank the DFG for project funding and the University of Cologne for a start-up grant. Biological testing was performed in South-Korea. AGG is recipient of the 2009 Honda-Fujishima award (Asian Photochemistry Association) for the antimalarial trioxane research.

© 2010 Griesbeck et al; licensee Beilstein-Institut.
This is an Open Access article under the terms of the Creative Commons Attribution License (http://creativecommons.org/licenses/by/2.0), which permits unrestricted use, distribution, and reproduction in any medium, provided the original work is properly cited.
The license is subject to the Beilstein Journal of Organic Chemistry terms and conditions: (http://www.beilstein-journals.org/bjoc) 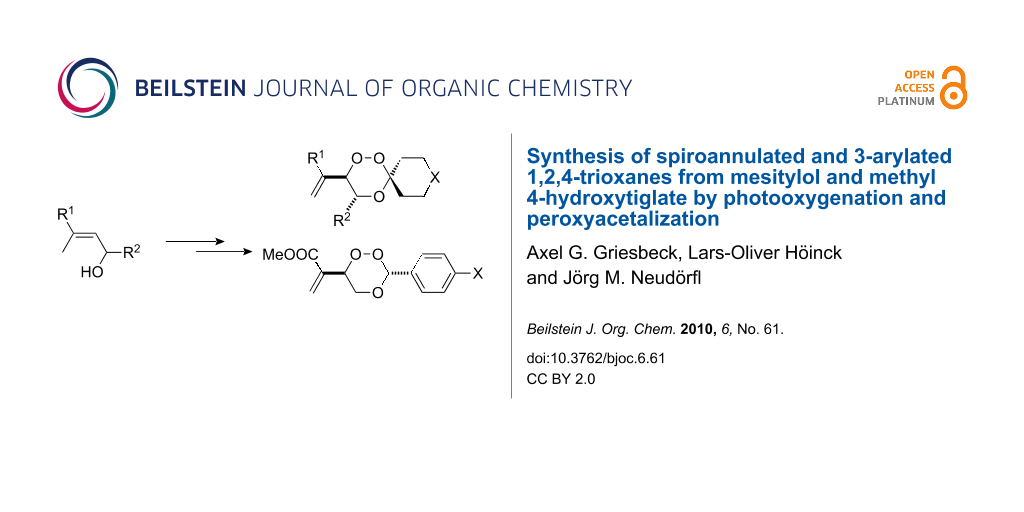