All articles from this author
Karuppasamy Parasuraman

Bis-adducts of 1,2,3,4-tetrahalo-5,5-dimethoxycyclopentadiene and 1,3-butadiene, generated in situ from 3-sulfolene, have been synthesized in excellent yield. Ruthenium catalyzed oxidation of the bis-adducts followed by a one-pot transformation of the resulting α-diketone furnished oxa-bridged compounds. Unambiguous stereochemical assignments of both diastereomeric series are reported.

3-Sulfolene is a nonflammable, nontoxic, nonhygroscopic and stable crystalline solid and is a convenient equivalent for gaseous 1,3-butadiene [1-3] and is commonly used for in situ generation of 1,3-butadiene as the diene component in Diels–Alder reactions. We and other groups have demonstrated the utility of cyclic dienes for the synthesis of 2:1 Diels–Alder bis-adducts with 1,2,3,4-tetrahalo-5,5-dimethoxycyclopentadiene 1 [4-7]. In the case of cyclic dienes (or trienes) such as cyclohexa-1,4-diene and cycloheptatriene, endo-syn-endo diastereomer 2 is formed exclusively, whilst cyclopentadiene and furan yield solely endo-anti-endo diastereomer 3 (Scheme 1). In continuation of our interest in the Diels–Alder bis-adducts of 1,2,3,4-tetrahalo-5,5-dimethoxycyclopentadienes 1 and their applications [8-14], we envisaged employing 1,3-butadiene as bis-dienophile component. Herein we report the synthesis of bis-adducts of 1,2,3,4-tetrahalo-5,5-dimethoxycyclopentadiene and butadiene followed by their transformation to oxa-bridged compounds. The stereochemistry of the diastereomeric products was also unequivocally established.

We were interested in exploring the previously overlooked stereochemical outcome of the Diels–Alder reaction between 1a and 1,3-butadiene [15,16]. The bis-adduct obtained from 1a and gaseous 1,3-butadiene was previously assigned as “endo, exo-bis(7,7-dimethoxy-1,2,3,4-tetrachloronorborn-2-en-5-yl)” [16]. In our reinvestigation we used 3-sulfolene as a 1,3-butadiene source to prepare both the mono- and bis-adducts. The two diastereomeric bis-adducts were separated and the relative stereochemistry was established by single crystal X-ray diffraction and 1H NMR spectroscopy. The bis-adducts were further transformed into bis-diketones by means of supported ruthenium catalyzed oxidation. Finally, the two diastereomeric norbornyl α-diketones from the chloro as well as the bromo series were each converted to the corresponding oxa-bridged compounds [7].

For the preparation of the 2:1 adducts, 2 equivalents of 1,2,3,4-tetrachlorodimethoxycyclopentadiene 1a and one equivalent of 3-sulfolene were heated at 140–150 °C for 69 h in a sealed tube. The reaction mixture was purified by silica gel chromatography to afford the mono-adduct 4 in 7% yield as an inseparable mixture of endo and exo isomers [16] (endo:exo = 90:10, as determined by 1H NMR spectroscopy) and the two diastereomeric bis-adducts 5 and 6 as a 1:1 mixture in 92% yield (Scheme 2).

The bis-adducts 5 and 6 were smoothly transformed to the corresponding bis-α-diketones 7 and 9 in excellent yield with a supported ruthenium catalyst (Ru-LDH) and NaIO4 as stoichiometric co-oxidant, a methodology developed in our laboratory [18,19]. Previously, we reported a smooth one-pot transformation of norbornyl α-diketones to the corresponding oxa-bridged derivatives [7], but our initial attempts to transform the bis-diketones 7 and 9 to bis-oxa-bridged compounds 8 and 10 using this strategy did not give the desired result. However, when the reaction was carried out in presence of the phase transfer catalyst TBHSO4 the bis-oxa-bridged compounds 8 and 10 were obtained (after esterification with diazomethane) in 31 and 37%, respectively (Scheme 3).

The relative stereochemistry in 8 was unambiguously established by the single crystal X-ray analysis (Figure 1) [20]. Working backwards, the structures of the adduct 5, the bis-diketone 7 were confirmed unequivocally.

We next turned our attention to the bromo analogue 1b in order to see if the overall yield of the bis-oxa-bridged derivatives 8 and 10 could be improved. We were also interested to see if any bromo derivative, corresponding to the diastereomer 6 in the chloro series, would furnish crystals suitable for X-ray analysis. The Diels–Alder reaction between 1,2,3,4-tetrabromo-5,5-dimethoxycyclopentadiene 1b and 3-sulfolene under the same experimental conditions as described for the chloro-analogue furnished mono-adduct 11 (endo:exo = 91:9) and bis-adducts 12 and 13 (Scheme 4). The bis-adducts 12 and 13 were separated by preparative HPLC.

The bis-adducts 12 and 13 were converted in excellent yields to the corresponding bis-α-diketones 14 and 15 (Scheme 5). Bis-diketone 14 was treated first with alkaline H2O2 and then with additional NaOH (60 equiv) at 60 °C followed by esterification with diazomethane to obtain the oxa-bridged compound 8 in 42% yield. Bis-diketone 15 was transformed into 10 in 39% yield by a similar method. Unlike the bis-diketones in chloro series (7 and 9), which required a phase transfer reagent (TBHSO4), the bromo bis-diketones 14 and 15 underwent transformation to the bis-oxa-briged derivative 8 and 10 under the usual procedure previously reported from our laboratory [7] (Scheme 5). Although the yields in the final step were moderate (42 and 39%), this corresponds to 63–65% per oxa-bridge formed which is gratifying considering the number of intermediates involved and possible side reactions.

Unfortunately, neither 13 nor 15 gave crystals suitable for X-ray analysis. However, unambiguous assignment was possible from the diagnostic chemical shifts and coupling constants observed for methine (H5) and methylene (H6 and H6’) protons of bis-adducts 6 and 13 (Figure 2). The appearance of H5 at ~3 ppm with characteristic coupling constants of ~9 and ~4 Hz to H6 and H6’, respectively, unequivocally supports the assigned structures. These values are consistent with several endo-substituted derivatives (R = alkyl-like groups) reported by us [9] and others [21,22]. The observed selectivity is in agreement with the strong endo-selectivity displayed by diene 1.

From the above results it is clear that the diastereomeric bis-adducts 5, 6 and 12, 13 are formed via endo-endo addition. The proposed transition states for the formation of bis-adducts are shown in Figure 3. The initial endo-mono adduct (4 or 11) gives rise to two possible endo-transition states leading to 5, 6 or 12, 13. The corresponding exo-transition states suffer from severe steric congestion due to the bulky R group and are consequently unfavorable. Similar steric considerations rule out the participation of an initially formed minor exo-mono adduct (4 or 11) to participate further in the reaction to give bis-adducts, thus ruling out the formation of diastereomers via exo-endo addition.

In conclusion, we have demonstrated that the Diels–Alder reaction between 1 (diene component) and 1,3-butadiene (bis-dienophile component) proceeds via endo-endo addition mode to give a 1:1 mixture of diastereomeric bis-adducts. The diastereomeric bis-adducts were separated and transformed into bis-oxa-bridged compounds. The relative stereochemistry of the products was unambiguously established by single crystal X-ray diffraction and NMR spectroscopy.

We thank the Department of Science and Technology (DST), New Delhi, for financial assistance. F.A.K. acknowledges the DST for a Swarnajayanti Fellowship. P.K. thanks CSIR for a fellowship.

© 2010 Khan and Parasuraman; licensee Beilstein-Institut.
This is an Open Access article under the terms of the Creative Commons Attribution License (http://creativecommons.org/licenses/by/2.0), which permits unrestricted use, distribution, and reproduction in any medium, provided the original work is properly cited.
The license is subject to the Beilstein Journal of Organic Chemistry terms and conditions: (http://www.beilstein-journals.org/bjoc) 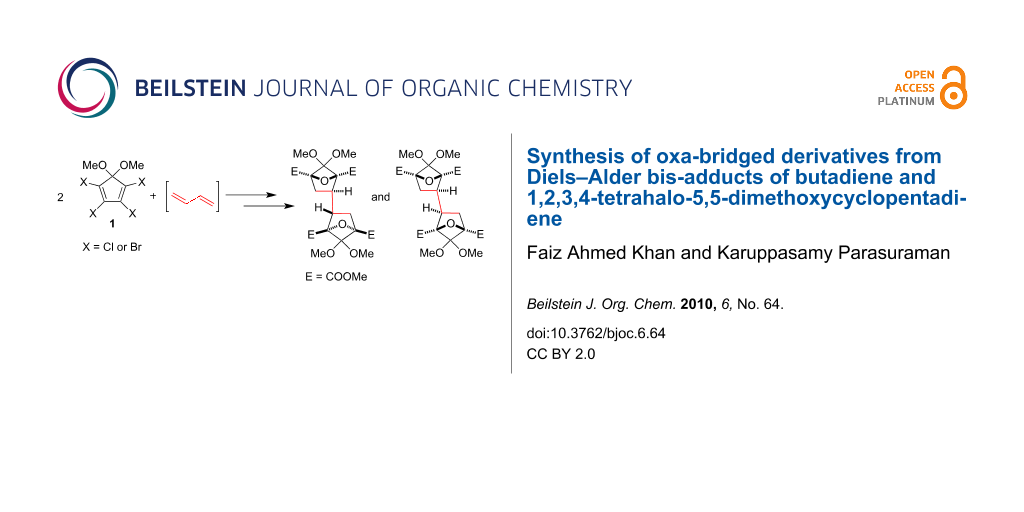