All articles from this author
Monir Tabatabai

Supramolecular interactions of macrocycles with different types of guest molecules are of increasing practical and theoretical interest [1-3]. In this context, we recently coupled cyclodextrin (CD) with cucubituril via a click reaction and investigated the special interactions with some suitable copolymers [4]. Because of their capability to form host–guest superstructures, CDs and calixarenes turned out to be very attractive not only as molecular receptors but also as building blocks for the construction of supramolecular architectures [5]. For that reason, we were encouraged to couple these two different types of macrocycles via click type reactions. Recent progress in the field of supramolecular chemistry is based on click chemistry, a versatile and powerful tool that permits the modular assembly of new molecular entities [6,7]. Both CDs as well as calixarenes have already been modified by click chemistry [8-14]. However, the coupling of calixarenes and β-CD via click reaction and their application in the field of supramolecular chemistry has not yet been reported. Herein, we describe the synthesis and complexation behavior of a dual type calix[4]arene-click-cyclodextrin (4) receptor by the cycloaddition of a dipropargylether of calix[4]arene (2) onto 6I-azido-β-CD (3) under microwave assisted conditions.

Synthesis and characterization of compound 4

The calixarene-click-CD compound (4) was synthesized as shown in Scheme 1.

The successful microwave assisted cycloaddition of 5,11,17,23-tetra-tert-butyl-25,27-dipropargylether-26,28-hydroxy-calix[4]arene (calix[4]arene-1,3-dipropargylether) (2) onto 6I-azido-6I-deoxycyclomaltoheptaose (3) was proven by IR spectroscopy by the disappearance of the bands for the azide group at 2105 cm−1 and for the propargyl group at 2115 cm−1, whilst the formation of the triazole ring was confirmed by the appearance of a new band at 1654 cm−1. The structure of compound 4 was additionally confirmed by 1H NMR spectroscopy with the appearance of an olefinic proton signal at 8.07 ppm (–C=CH–N) and the disappearance of the characteristic propargyl proton signal at 2.50 ppm. Furthermore, the aromatic signals at about 7.0 ppm and the tert-butyl groups at 1.0 to 1.2 ppm indicates the presence of the calix[4]arene component. The CD was confirmed by the presence of the H2–H6 protons at about 3.3 to 3.6 ppm, the primary hydroxy group at 4.5 ppm and the secondary hydroxy groups at 5.7 ppm. The 1H NMR spectrum of the successful cycloaddition of 2 and 3 indicates that the di-substituted calix[4]arene 4 was the major product along with a little amount of the mono-substituted compound. In addition, the MALDI-TOF-MS clearly confirmed the existence of the covalently combined rings (4) with a molecular mass of [M + Na+] = 3066 m/z (1 calix[4]arene-click- 2 CD).

An adamantane containing copolymer 5 was prepared via free radical polymerization of 6-acrylamido-N-adamantyl-hexane amide and NIPAAM. Copolymer 5 was mixed with 4 subsequently (Scheme 2) to form supermolecular structures.

The hydrodynamic diameter of copolymer 5 increased from 8.5 nm to 53 nm after addition of 4. This clearly indicates the inclusion of a polymer attached adamantane moiety into the cavity of CD. The adamantane moiety is known to be one of the best guest molecules for β-CD [15]. A relatively high complex stability constant for a polymer attached adamantane groups with CD is about 5000 M−1 [16]. Therefore, as shown in Scheme 2, compound 4 obviously is expected to act as an intermolecular linker between the copolymer chains. To prove the assumed agglomeration of the CD-moieties in water [17], adamantyl carboxylate was added to the solution as a competitive guest molecule. As expected, a decrease of the hydrodynamic diameter from 53 nm to 13 nm was observed. Adamantyl carboxylate is known to be a more effective guest [15] than the polymer attached adamantane moiety itself. Thus, the inclusion of the low molecular weight adamantyl carboxylate into the cavity of the CD component of 4 leads to a replacement of copolymer 5.

To prevent the agglomeration effects of the CD in compound 4 as discussed above, copolymer 5 and compound 4 were dissolved in an aqueous NaOH solution at pH 12 to deprotonate the free phenolic groups of the calix[4]arene-derivative 4. After that, the hydrodynamic diameter of copolymer 5 increased due to complexation with negatively charged 4 from 8.5 nm to 17.5 nm. This increase of the hydrodynamic diameter again indicates the inclusion of the polymer attached adamantane moiety into the cavity of the CD-component. Comparing the diameters of complex (4 + 5) at pH 7 (53 nm) and at pH 12 (17.5 nm), it can be supposed, that due to deprotonation intermolecular electrostatic repulsion takes place which decreases the agglomeration in the system.

aDLS measurements were performed at 10 °C, below the turbidity point of the copolymer.

A calixarene-click-cyclodextrin combi-receptor (4) was synthesized via copper-catalyzed Huisgen 1,3-dipolar cycloaddition. Investigations of the interactions with an adamantyl moiety containing copolymer have been carried out, showing the existence of a supramolecular structure. Due to deprotonation of the calixarene moieties at higher pH values, a significant change in solubility and hydrodynamic diameter was observed and correlated to the formation of superstructures.

Measurements. IR spectra were recorded with a Nicolet 6700 FTIR (Fourier transform infrared) spectrometer equipped with an ATR unit. The measurements were performed in the rage of 4000–300 cm−1 at room temperature. 1H NMR spectra were recorded on a Bruker Avance DRX 200 at 20 °C. Chemical shifts were referenced to the solvent value δ 2.51 for DMSO-d6. Matrix assisted laser desorption ionization time of flight mass spectrometry (MALDI-TOF-MS) was performed on a Bruker Ultraflex TOF mass spectrometer. Ions formed with a pulsed nitrogen laser (25 Hz, 337 nm) were accelerated to 25 kV, the molecular masses being recorded in linear mode. 2-(4-Hydroxyphenylazo)benzoic eacid (HABA) in DMF (25 mg/mL) was used as matrix. The samples (1 mg/mL in DMF) were mixed with the matrix solution at volumetric ratios of 1:10. Gel permeation chromatography (GPC) analyses were performed on a GPC system from PPS with PPS-WIN-GPC software 4.01, 6.1 with N,N-dimethylformamide as eluent. The flow rate was 1 ml min−1 and the column temperature was maintained at 60 °C. A 0.1% (w/w) polymer solution (100 µL) was applied to a hydroxyethyl methacrylate (HEMA) column combination that consisted of a precolumn of 40 Å and main columns of 40, 100 and 3000 Å porosities. The weight-average molecular weight (Mw) and the polydispersity (PD) were calculated by a calibration curve generated by polystyrene standards with a molecular weight range from 370 to 1000000 Da. DLS experiments were carried out on a Malvern HPPS-ET apparatus at a temperature value of 10 °C. The particle size distribution was derived from a deconvolution of the measurement number averaged autocorrelation function of the sample by the general purpose mode algorithm included in the DTS software. Each experiment was preformed five times to obtain statistical information. Cloud points were determined by transmission changes (at 500 nm) of the solution heated at 1 K/min in a magnetically stirred cell; cloud points were defined as the temperature at which the transmission decreases by 50%. Microwave assisted synthesis was performed using a CEM Discover synthesis unit (monomode system). The temperature was measured by infrared detection with control and maintained at constant value by power modulation. Reactions were performed in closed vessels under controlled pressure.

Synthesis of calix[4]arene-click-cyclodextrin 4. The microwave assisted click reaction of calix[4]arene-1,3-dipropargylether (2) (100 mg, 0.14 mmol) with 6I-azido-6I-deoxycyclomaltoheptaose (3) (324.8 mg, 0.28 mmol) was carried out in DMF in the presence of Cu(I) generated by the reduction of copper sulfate (0.014 mmol) with sodium ascorbate (0.07 mmol). The tube was sealed, placed in the CEM monomode microwave and irradiated at 150 °C and 100 W for 30 min. The solvent was removed under reduced pressure. The crude product 4 was washed with water and dried in vacuum to afford a brown solid (yield: 70%).

Host–guest complexion of polymer 5 and calix[4]arene-click-cyclodextrin 4. For further investigations, polymer 5 (50 mg, 5.3 × 10−3 mmol) was dissolved in 5 ml water or aqueous NaOH at pH 12. Product 4 (10 mg, 3.2 × 10−3 mmol) was added and the solution was mechanical stirred for 24 h. This solution was centrifuged to remove undissolved particles.

© 2010 Garska et al; licensee Beilstein-Institut.
This is an Open Access article under the terms of the Creative Commons Attribution License (http://creativecommons.org/licenses/by/2.0), which permits unrestricted use, distribution, and reproduction in any medium, provided the original work is properly cited.
The license is subject to the Beilstein Journal of Organic Chemistry terms and conditions: (http://www.beilstein-journals.org/bjoc) 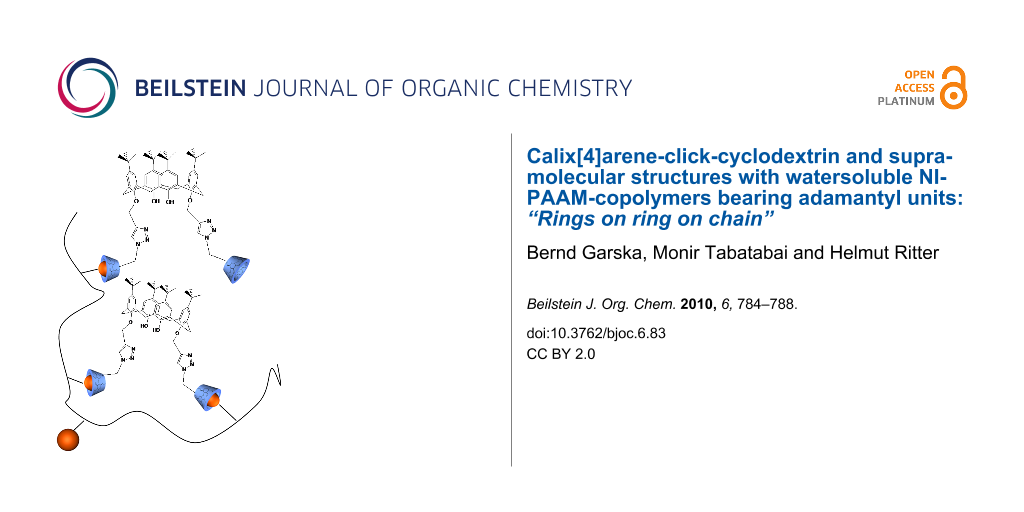