Superstructures of fluorescent cyclodextrin via click-reaction


All articles from this author
Rainer Beckert

Most small heterocyclic molecules show low fluorescence. However, as we reported earlier, substituted 4-hydroxythiazoles have a high fluorescent nature [1,2]. These optical properties can be used for the development of sensor molecules, blue emitting dyes, luminescent materials or as donor–(π-conjugated-bridge)–acceptor-type dyes in dye-sensitized solar cells [3-5]. The etherification of 4-hydroxythiazole by using propargyl bromide opens up a wide field of modification through click chemistry with azides or thioles [6,7]. Accordingly, following our former work with mono azide modified CD, we were encouraged to combine the fluorescent hydroxythiazole dye with CD [8-10]. Such water soluble spectroscopically active hosts can be used as potentially biological markers, as molecular sensors, or for chiral recognition in aqueous solution [11-13]. Thus, in this present paper we describe the spectroscopic and structural behavior of a “CD-Click-Fluorophore” in the absence and presence of a competitive guest in water.

The water-soluble fluorescent cyclodextrin was synthesized via copper-catalyzed cycloaddition (Scheme 1). The existence of the resulting product was confirmed by MALDI–TOF spectrometry, 1H NMR and IR spectroscopy. The formation of host–guest structures between the thiazole functionality and β-CD was proven by 1H NMR rotating-frame Overhauser effect spectroscopy (ROESY) (Figure 1). NOE correlation signals of the β-CD cavity protons between 4 and 3.5 ppm and the aromatic protons of the pyridine moiety 8.6–7.4 ppm were observed, clearly proving the formation of complexes.

However, no NOE interaction between protons of the methyl group of the thiazole and the triazole proton itself with CD is noticed. This indicates that only the inclusion of the pyridine moiety in the hydrophobic cavity of the CD takes place.

The formation of supramolecular structures was also proven by UV–vis spectroscopy and fluorescence spectroscopy. Figure 2 shows the UV–vis absorption spectra of 3 in water with the characteristic band at λmax= 340 nm. The addition of a 10-fold excess of potassium adamantane-1-carboxylate, as competitive guest for CD leads to a hypsochromic shift with λmax = 336 nm, through the exclusion of the fluorophore moiety from the hydrophobic cavity of CD. This exchange causes a change in the HOMO–LUMO gap [14,15].

By adding potassium adamantane-1-carboxylate the pyridine moiety is displaced from the cavity. As a consequence, the noncovalent structures collapse to monomeric and oligomeric CD units and the hydrodynamic diameter decreases by as much as 5 nm. Asymmetric flow field-flow fractionation experiments coupled with a three-angle light scattering detector confirm also the formation of intermolecular superstructures (Figure 5). Structures with a molar mass of Mn up to 100,000 g/mol and also a hydrodynamic diameter up to 200 nm were detected. The conformation plot, i.e., the plot of the log of the radius as a function of the log of the molar mass, with a value of 0.7 estimates an elongated shape of the noncovalent structures. Upon addition of potassium adamantane-1-carboxylate no signals of the polymeric structure were detected.

In summary, we have presented the synthesis of a fluorescent cyclodextrin via click reaction. The changes in the spectroscopic properties of the fluorescent cycloadduct were investigated in the presence and absence of the competitive guest potassium adamantane-1-carboxylate. The intermolecular formation of polymeric structures with elongated shape, through poly(host–guest)-interactions, was found. Furthermore, we were able to show the collapse of the supramolecular polymers upon addition of potassium adamantane-1-carboxylate.

All reagents used were commercially available (Sigma-Aldrich, Acros Organics) and used without further purification. β-CD was obtained from Wacker Chemie GmbH, Burghausen, Germany and was used after drying overnight with a vacuum oil pump over P4O10. N,N-Dimethylformamide (DMF) was purchased from Fluka, Germany. Dimethyl sulfoxide-d6 (99.9 atom % D) and deuterium oxide, D2O, were obtained from Deutero GmbH, Germany. 1H NMR spectra were recorded on a Bruker Avance DRX 300 at 20 °C, shifts (δ) are given relative to signals arising from the solvent.

FT IR spectra were recorded on a Nicolet 6700 FT IR spectrometer equipped with an ATR unit. Matrix-assisted laser desorption/ionization-time-of-flight mass spectrometry (MALDI–TOFMS) was performed on a Bruker Ultraflex TOF mass spectrometer. Ions were formed with a pulsed nitrogen laser (25 Hz, 337 nm) and the molecular masses were recorded in linear mode. 2,5-Dihydroxybenzoic acid (DBH) in acetonitrile/water was used as a matrix.

Synthesis of 2-[5-methyl-4-(prop-2-yn-1-yloxy)-1,3-thiazol-2-yl]pyridine (2): The alkyne modified thiazol was synthesized according to the literature procedure [2].

© 2013 Maciollek et al; licensee Beilstein-Institut.
This is an Open Access article under the terms of the Creative Commons Attribution License (http://creativecommons.org/licenses/by/2.0), which permits unrestricted use, distribution, and reproduction in any medium, provided the original work is properly cited.
The license is subject to the Beilstein Journal of Organic Chemistry terms and conditions: (http://www.beilstein-journals.org/bjoc) 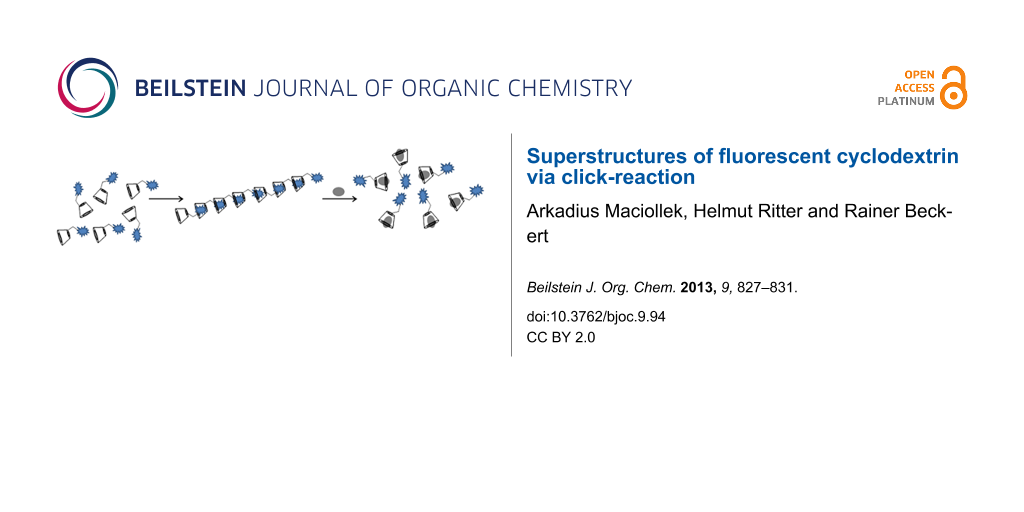