All articles from this author
Chunxiang Kuang


All articles from this author
Hui Jin


All articles from this author
Qing Yang


All articles from this author
Zhongkui Zhang

An efficient synthesis of 1,3-diaryl-4-halo-1H-pyrazoles was achieved. The synthesis involves the [3 + 2] dipolar cycloaddition of 3-arylsydnones and 2-aryl-1,1-dihalo-1-alkenes. The process proceeds smoothly in moderate to excellent yields. 1,3-Diaryl-4-halo-1H-pyrazoles are found to be important intermediates that can easily be converted into 1,2,5-triaryl-substituted pyrazoles via Pd-catalyzed C–H bond activation.

Over the past decade, pyrazoles as key motifs in biologically active compounds have received increasing attention from the synthetic community. Diazoles can be employed as a central building block in the synthesis of compound libraries in the pharmaceutical [1] and agrochemical [2] industries. Pyrazole and its derivatives are an important class of heterocyclic compounds. As medicines, many of them display anti-inflammatory [3], antimicrobial [3], antiplatelet [4], antiallergenic [5], antifungal [6], MAP Kinase inhibitor [7], and anticancer activities [8]. As pesticides, they are used as insecticides [9] and fungicides [10], and as well as antiviral [11] and antibacterial agents [12]. Pyrazoles are gaining interest as ligands for transition metals, and in the field of materials chemistry [13,14].

Pyrazole and its derivatives can be synthesized by several methods [15]. The most common approach is based on the condensation of hydrazines with 1,3-dicarbonyl compounds or their equivalents. However, the 1,3-dipolar cycloaddition offers a more convenient synthetic route. Sydnones are easily accessible aromatic compounds and versatile synthetic intermediates. They can be used as unusual, alternative cycloaddition substrates for pyrazole synthesis [16,17]. These dipolar compounds are readily prepared in two steps from N-functionalized amino acids, and are readily stored and handled. Methods have been disclosed for the [3 + 2] dipolar cycloaddition of sydnones with alkenyl silanes [18] and stannanes [18], alkenyl arenes [19], 1,3-dienes [20,21], α,β-unsaturated esters [19,22] and nitriles [23], phosphane oxides [24] or with alkynyl silanes [18], stannanes [18,25,26], arenes [27,28], esters [29-33], boronic esters [34,35]. However, the cycloaddition of sydnones with 1,1-dihaloalkenes is unknown, as is the direct formation of 4-halopyrazoles through the [3 + 2] dipolar cycloaddition of sydnones.

To determine the optimal reaction conditions, 3-phenylsydnone (1a) and 1-(2,2-dibromovinyl)-4-nitrobenzene (2a) were used as the model substrates. A mixture of 1a, 2a, Cs2CO3 and xylene was then stirred in the dark in a sealed tube maintained at 140 °C in an oil bath. After 16 h, the product 3a was isolated in 72% yield.

The effects of different bases, molar ratios of 1a to 2a, solvents, and temperatures on the formation of 3a were investigated. The optimization of the 1,3-dipolar cycloaddition process between 1a and 2a is summarized in Table 1. Several bases were examined. When 1a reacted with 2a in the presence of Cs2CO3 as a base in xylene (140 °C, 16 h) in the dark, the reaction proceeded smoothly to generate the desired product 3a in 72% yield. Changing the base to K2CO3 decreased the yield to 54%. When Et3N, DBU, or no base was used, product 3a was not obtained (Table 1, entries 1–5). Changing the solvent to DMSO and DMF led to traces of 3a or no product, respectively (Table 1, entries 6–7). Various molar ratios of 1a to 2a were also studied. When the molar ratio of 1a to 2a was 1:1, the yield (48%) was much lower than that obtained with a ratio of 1:2 (72%) (Table 1, entries 1 and 8). Changing the quantity of Cs2CO3 to 2.0 equiv decreased the yield to 56%, but increasing the amount of Cs2CO3 to 4.5 equiv led to only a slightly higher yield (73%) (Table 1, entries 9 and 10).

Under the optimized conditions, a series of 3-arylsydnones 1 and 2-aryl-1,1-dihalo-1-alkenes 2 substrates were examined. Table 2 shows that in most cases, the desired pyrazoles 3 were smoothly generated in high yields (Table 2, entries 1, 4, 5, and 7–9). In cases with the aromatic portion of 3-arylsydnones 1 carrying either an electron-withdrawing group, such as in chlorine 1d, or an electron-donating substituent, as in methyl 1b and methoxyl 1c, the reactions all proceeded smoothly in moderate to excellent yields. Higher yields were obtained when the aromatic portion of 3-arylsydnones 1 carried an electron-donating group. The presence of a strong electron-donating group in the aromatic portion of 3-arylsydnones 1c greatly increased the reaction yield (Table 2, entries 7–9). On the other hand, the presence of an electron-withdrawing substituent on the aromatic portion of 3-arylsydnones 1d lead to the reactions providing pyrazoles 3 in relatively low yields (Table 2, entries 10–12). The effects of 2-aryl-1,1-dihalo-1-alkenes 2 on the formation of pyrazoles 3 were also remarkable. In the cases of the aromatic portion of 2-aryl-1,1-dihalo-1-alkenes 2 carrying nitryl 2a or cyano 2c groups all reactions proceeded smoothly in moderate to excellent yields. However, the stronger electron-withdrawing nitryl group provided pyrazoles 3 in relatively high yields. Under the same conditions, the reactivity of 1-(2,2-dibromovinyl)-4-nitrobenzene 2a was higher than that of 1-(2,2-dichlorovinyl)-4-nitrobenzene 2b (Table 2, entries 1, 2, 4, 5, 7, 8, 10 and 11). Generally speaking, where present the electron-donating groups of the substrates 1 exhibited stronger electron-donating effects, relative to substrates 2, leading to higher yields. We also used 1-(2,2-dibromovinyl)-4-methylbenzene (2d) as a dipolarophile to react with 3-phenylsydnone. In the process, two isomers, 4-bromo-1-phenyl-3-p-tolyl-1H-pyrazole (3m) and 3-bromo-1-phenyl-4-p-tolyl-1H-pyrazole (3n) were found, and they were generated in 35% and 17% yields, respectively. The experimental results indicate that the electron-donating group, i.e., methyl on the aromatic portion of 2-aryl-1,1-dihalo-1-alkenes, reduced the yields and regioselectivity of the reaction. Products 3 (except 3m and 3n) were generated with excellent regiocontrol. It may be that the large substituent (aryl) on the alkyne and the strong electron-withdrawing group, i.e., nitryl or cyano, are of great benefit to the regioselectivity of the reaction.

The polysubstituted pyrazoles 3 were characterized by NMR, IR and HRMS. The structure of pyrazole 3g was further confirmed by single-crystal X-ray diffraction studies (Figure 1).

In order to elucidate the probable reaction mechanism, a mixture of 1a, 2a and xylene was stirred in the dark at 160 °C. After 16 h, no product was found. The results indicate that it was difficult for 2-aryl-1,1-dihalo-1-alkenes to react with 3-arylsydnone in the absence of a base. The steric hindrance of the two halogen atoms on the alkenes is possibly the key factor. Thus a plausible mechanism for the synthesis of pyrazoles 3 could be as follows (Scheme 2): Initially, a haloalkyne is obtained by the elimination of a hydrogen halide from 2-aryl-1,1-dihalo-1-alkenes 2 with Cs2CO3 as a base [36]. Then, haloalkyne reacts with 3-arylsydnone 1 in a 1,3-dipolar cycloaddition reaction. Finally, CO2 is lost [18,34] and pyrazole 3 is generated.

In summary, a series of novel 1,3-diaryl-4-halo-1H-pyrazoles was synthesized in moderate to excellent yields by using 3-arylsydnones and 2-aryl-1,1-dihalo-1-alkenes in the presence of the mild base Cs2CO3. The synthesis of a series of new 1,3,4-trisubstituted pyrazoles, which are important heterocycle compounds in medical and pesticide research, was convenient and efficient.

The work was supported by the Natural Science Foundation of China (No. 30873153), the Key Projects of Shanghai in Biomedical (No.08431902700) and the Scientific Research Foundation of State Education Ministry for the Returned Overseas Chinese Scholars. We would like to thank the Center for Instrumental Analysis, Tongji University, China.

© 2011 Yang et al; licensee Beilstein-Institut.
This is an Open Access article under the terms of the Creative Commons Attribution License (http://creativecommons.org/licenses/by/2.0), which permits unrestricted use, distribution, and reproduction in any medium, provided the original work is properly cited.
The license is subject to the Beilstein Journal of Organic Chemistry terms and conditions: (http://www.beilstein-journals.org/bjoc) 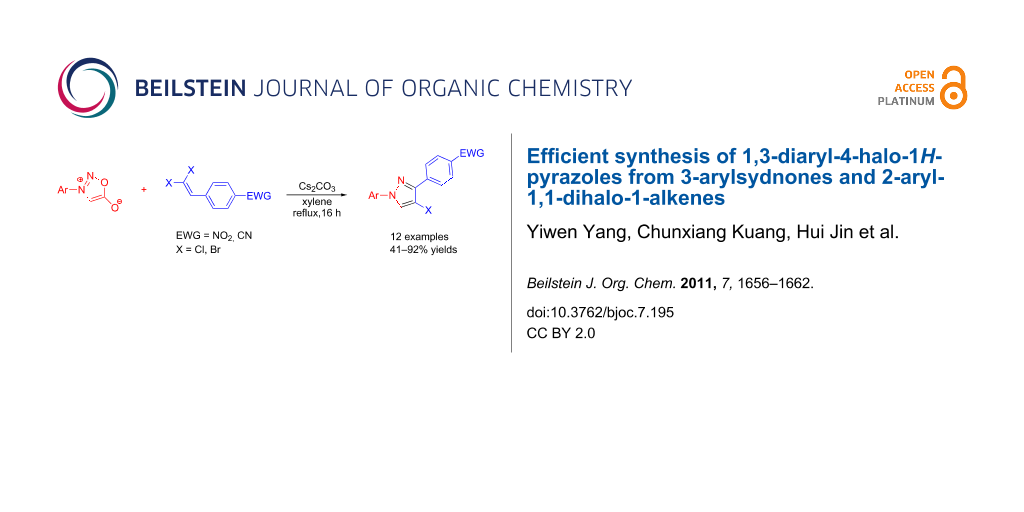