All articles from this author
Marilua A. Moreira

Four diastereoisomers of 2-fluorobicyclo[2.2.1]heptan-7-ols were computationally investigated by using quantum-chemical calculations, and their relative energies were analyzed on the basis of stereoelectronic interactions, particularly the presence or otherwise of the F∙∙∙HO intramolecular hydrogen bond in the syn-exo isomer. It was found through NBO and AIM analyses that such an interaction contributes to structural stabilization and that the 1hJF,H(O) coupling constant in the syn-exo isomer is modulated by the nF→σ*OH interaction, i.e., the quantum nature of the F∙∙∙HO hydrogen bond.

Intra- and intermolecular hydrogen bonds (HB) play an important role in determining the molecular arrangements and properties, as well as reactivity of a wide range of chemical and biological systems [1]. However, it has been argued that organic fluorine hardly ever participates in HB, due to the poor proton acceptor ability of the fluorine atom [2]; nevertheless, there are some instances of organofluorine compounds forming seven-membered hydrogen bonds [3], while the absence of HB in some monocyclic fluorohydrins has been shown to be due to geometric restrictions imposed by the ring size [4]. While structure 1 in Figure 1 exhibits a F∙∙∙HO intramolecular HB, structures 2, 3 and 4 do not experience such an interaction [5-8]. However, 2-fluorophenol (4) shows a through-space (TS) coupling constant 1TSJF,H(O) of ca. 5 Hz, which has been ascribed as being due to the overlap of electronic clouds between F and hydroxy H rather than to hydrogen bonding [8], while the corresponding SSCC in 8-fluoro-4-methyl-1-naphthol, which exhibits F∙∙∙HO intramolecular HB, is substantially higher, i.e., (−)28.4 Hz [9].

In fact, the importance of NMR scalar spin–spin coupling constants (SSCCs) transmitted through hydrogen bonds emerged, fundamentally, from the observation of 1hJ15N,H and 2hJ15N,15N SSCCs for DNA and RNA molecular systems [10,11]. 19F is a suitable nucleus for NMR analysis, since it has spin 1/2, and thus, F∙∙∙HO intra/intermolecular HB in biological systems can be readily assessed through JF,H(O) SSCCs. This seems relevant because the replacement of a hydrogen by a fluorine atom in a molecule does not have a significant steric effect, but it suppresses adventitious metabolism, influences the pKa of functional groups, and alters solution conformation [12].

In this context, conformational screening and theoretical evaluation of 2-fluorobicyclo[2.2.1]heptan-7-ols (2-fluoronorbornan-7-ols, compounds 5–8 in Figure 1) represents an adequate approach to rationalize the role of F∙∙∙HO intra/intermolecular HB, since these model compounds are less flexible (easier to analyze) than others based on, e.g., the 2-fluoroethanol fragment, and allow the energetic comparison with a pool of diastereoisomers that do not experience such an interaction. Intramolecular interactions between vicinal F and OH groups have already been investigated in cyclic compounds (including aromatic rings) [4], and the present study extends such analysis to aliphatic compounds capable of forming six-membered rings through hydrogen bonding.

The hydroxy group of the 2-fluorobicyclo[2.2.1]heptan-7-ols undergoes rotation, giving rise to the stable conformers (energy minima) of the potential energy surfaces (PES) in Figure 2, which were obtained by computing the relative energies of 5–8 upon scanning of the H–O–C–C(CF) dihedral angle (θ) in steps of 10° at the HF/6-31g(d,p) level, using the Gaussian09 package of programs [13]. Each minimum was subsequently optimized at the MP2/aug-cc-pVDZ level, and the respective energies are given in Table 1, which shows that the conformer of 5 with the hydroxy hydrogen directed toward the fluorine atom (θ = 330.0°) is the most stable structure in the gas phase (this structure will be further referred to as the global minimum). This suggests that a F∙∙∙HO intramolecular HB is operating and governs the stability of 5; however, different organofluorine compounds with similar orientation of the hydroxy group do not exhibit such an interaction and are highly stable [6,8]. This can be either due to other attractive interactions present in the referred conformer or prevalent repulsive interactions (e.g., between fluorine and oxygen lone pairs) in the other conformer(s). In the present study, comparison of 5 with three diastereoisomers (6–8) gives insight into the role of F∙∙∙HO intramolecular HB for the conformer stabilization, since the simple observation that the conformational energy in 5 is ca. 2.9 kcal mol−1 does not warrant that F∙∙∙HO intramolecular HB is the dominating, or even an operating, factor of the conformational isomerism in 5.

The F∙∙∙HO intramolecular HB in the global minimum was fully confirmed by Quantum Theory of AIM (QTAIM) analysis [16]. The QTAIM method is a rigorous electron density (ρ), interpretative methodology, which can define, unambiguously, atoms as they exist in molecules and the interactions between such atoms [16-18]. Even the weakest bonding interactions can be defined by the QTAIM through the so-called bond paths (BPs), that is, lines of maximum electron density linking neighboring nuclei of a molecular system in an equilibrium geometry, which, as repeatedly emphasized by Bader, is the sufficient and necessary condition for the definition of bonding between atoms [19-21]. According to Figure 3 and the QTAIM data of Table 2, the global minimum indeed experiences F∙∙∙HO intramolecular HB (parameters generated by using the other syn-exo conformer are taken as standard, because it cannot show HB), which is therefore the determining factor in its stability. Also, the stability and ionic character of the F∙∙∙HO intramolecular HB in the global minimum were confirmed by the low value of the ellipticity at the bond critical point (BCP, 0.04 au) and the |VC|/GC relationship at the BCP (VC and GC are the kinetic and potential energy values at the F∙∙∙HO HB BCP), respectively. The |VC|/GC parameter value is lower than 1 au (i.e., 0.973 au), and hence, the F∙∙∙HO intramolecular HB in the global minimum has an ionic character [22].

In fact, according to the NBO theory, the total energy of a molecule can be split into Lewis type interactions (basically steric interactions) and electron-transfer interactions (such as hyperconjugation); this can be achieved by deleting all interactions involving antibonding and Rydberg orbitals in a molecule and then computing the energy of this hypothetical system. Accordingly, the global minimum was found to be the most destabilized form in terms of steric effects (possibly because of the nF/σOH contribution), but it is greatly stabilized by hyperconjugative interactions, with special emphasis on the nF→σ*OH interaction (4.0 kcal mol−1).

Since the nF→σ*OH interaction prevails over the nF/σOH repulsion, the F∙∙∙HO intramolecular HB can be the main transmission mechanism of a through-space F–H(O) coupling constant (1hJF,H(O)). This can be important for monitoring fluorine-based interactions in biological systems and material sciences. The angular dependence of 1hJF,H(O) as a function of the nF→σ*OH interaction was theoretically evaluated at the BHandH/EPR-III level (which has shown to perform well in estimating 19F-based couplings [23]), and a high correlation was found (R2 = 0.97), indicating that such an interaction, and thus the F∙∙∙HO intramolecular HB forming a six-membered ring, modulates the 1hJF,H(O) SSCC (Figure 4), which is governed by the Fermi contact term. The SSCC amplitudes upon varying θ for the remaining diastereoisomers, are negligible (see Supporting Information File 1), as is the nF→σ*OH interaction, as expected; on the other hand, the calculated 1hJF,H(O) SSCC for the global minimum is significant (ca. −18 Hz, Table 3).

In summary, there is a competition between nF→σ*OH and nF/σOH interactions as driving forces of the conformational isomerism of 5, but the former is slightly dominant, modulates the 1hJF,OH SSCC in this aliphatic organofluorine compound, and is the main factor responsible for the large value of 1hJF,OH in the global minimum.

FAPEMIG, FAPESP and CNPq are gratefully acknowledged for the financial support of this research, and for a fellowship (CNPq, to MPF) and studentships (CNPq to FMPR, FAPEMIG to MAM, and FAPESP to RAC).

© 2012 de Rezende et al; licensee Beilstein-Institut.
This is an Open Access article under the terms of the Creative Commons Attribution License (http://creativecommons.org/licenses/by/2.0), which permits unrestricted use, distribution, and reproduction in any medium, provided the original work is properly cited.
The license is subject to the Beilstein Journal of Organic Chemistry terms and conditions: (http://www.beilstein-journals.org/bjoc) 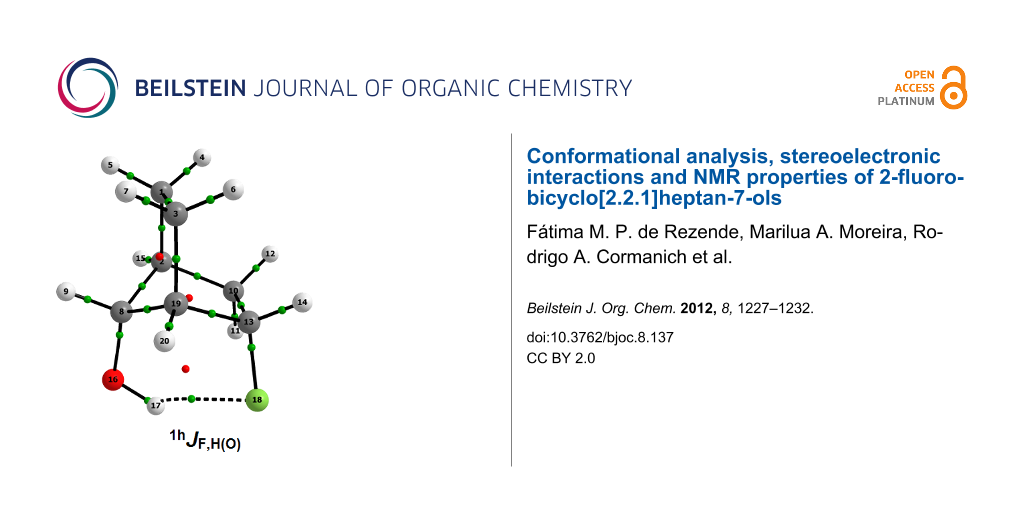