All articles from this author
Fangrui Zhong


All articles from this author
Yixin Lu

The first decarboxylative Mannich reaction employing β-keto acids, catalyzed by cinchonine-derived bifunctional thiourea catalyst has been described. The desired β-amino ketones were obtained in excellent yields and with moderate to good enantioselectivities.

Chiral β-amino ketones are an important class of building blocks for the synthesis of 1,3-amino alcohols [1,2], 1,3-amino acids [3] and other bioactive nature products [4-6]. Given their synthetic significance, methods for the asymmetric synthesis of β-amino ketones have been extensively investigated over the past few decades [7]. Among them, the Mukaiyama–Mannich reaction performed with silyl enol ethers and sulfonyl aldimines, catalyzed by a chiral Lewis acid complex, is one of the most important synthetic methods [8-13]. Apparently, direct use of inactivated ketones as a donor would be of great practical value. Indeed, direct approaches such as asymmetric enamine catalysis [14-17] and Brønsted acid catalysis [18] have been reported, through the activation of ketones or aryl imines [19]. However, substrates for the enamine activation are limited to only acetone and cyclic alkyl ketones. Application of aryl methyl ketones in the asymmetric Mannich reaction by enamine catalysis remains elusive. On the other hand, the only chiral Brønsted acid catalytic system based on BINOL-phosphates was reported by Rueping et al. Unfortunately, the yields of the reported reactions were unsatisfactory and the enantioselectivities were modest [20].

In recent years, inspired by the enzymatic synthesis of polyketides and fatty acids in biological systems, the enantioselective decarboxylative reactions of malonic acid half thioesters (MAHTs) have received much attention. In this regard, various electrophiles, including aldehydes, ketones, imines, activated alkenes and azodicarboxylates, have been employed as electrophiles in the presence of metal [21-25] or organocatalysts [26-36].

To provide a practical solution to the low reactivity associated with aryl methyl ketones, we wondered whether β-keto acids could serve as an enolate equivalent to aryl methyl ketones upon decarboxylation (Scheme 1). The proposed addition–decarboxylation sequence is consistent with current mechanistic understanding [31,35,37,38]. However, we cannot exclude an alternative decarboxylation–addition pathway at this stage. In fact, in sharp contrast to the popular use of malonic acid half thioesters (MAHTs) as an ester enolate equivalent in enantioselective decarboxylative additions [39], the employment of β-keto acids as a reaction partner in decarboxylative processes has rarely been explored [37]. Herein, we reported the first decarboxylative Mannich reaction between the β-keto acids and sulfonylimines, affording chiral β-amino ketones in excellent yields and good enantioselectivities.

In our initial screening, we examined the model reaction between tosylimine 1a and β-keto acid 2a in the presence of a range of bifunctional catalysts (Table 1). We first evaluated the catalytic effects of several cinchona alkaloid derivatives. Commercially available cinchonidine (CD-1) led to the formation of the product with disappointing enantioselectivity (Table 1, entry 1). Quinine-derived sulfonamide [40], β-isocupreidine (β-ICD) [41,42] and biscinchona alkaloid (DHQ)2AQN were all found to be poor catalysts (Table 1, entries 2–4). On the other hand, cinchona alkaloid derived bifunctional thiourea tertiary amine catalysts afforded much improved results (Table 1, entries 5–7). Among them, the cinchonine based thiourea C-1 turned out to be the best catalyst, and the Mannich product was isolated with 58% ee (Table 1, entry 7). In addition, we also examined several other bifunctional catalysts based on amino acids [43,44], including threonine derived Thr-1 [45], and tryptophan based Trp-1 [46], as well as threonine incorporated multifunctional catalyst CD-3 [47]. However, no further improvement could be achieved (Table 1, entries 8–10). The influence of different imines on the reaction was subsequently explored, and it was found that the electronic nature of the sulfonyl protective groups affected the enantioselectivity. While the employment of nosylimine 1b led to decreased enantioselectivity (Table 1, entry 11), replacement of tosylimine 1a with N-(p-methoxybenzenesulfonyl)imine 1c resulted in further improvement, and the product was obtained in 65% ee (Table 1, entry 12). However, when ethoxycarbonylimine 1d was used, nearly racemic products were obtained, suggesting the importance of the sulfonyl group in the asymmetric induction (Table 1, entry 13). Less reactive imines, such as diphenylphosphinoylimine 1e and Cbz-imine 1f, proved to be unsuitable for the reaction (Table 1, entries 14 and 15).

A screening of the solvent effect was then followed, and the results are summarized in Table 2. In general, the reaction proceeded very well in common aprotic solvents, and excellent yields were consistently obtained (Table 2, entries 1–9). Enantioselectivity of the reaction varied, and diethyl ether was found to be the best solvent, furnishing the desired product with 72% ee. Employment of other etheric solvents, including methyl tert-butyl ether and dioxane, and lowering reaction temperature did not offer further improvement (Table 2, entries 10–12).

To establish the substrate scope, a number of sulfonylimines derived from aromatic aldehydes were employed as acceptors, and the results are summarized in Table 3. In general, the reaction worked well for imines with various substituents at different positions of the phenyl ring, including electron-withdrawing groups, electron-donating groups and halogen atoms, and excellent yields and moderate ee values were obtained (Table 3, entries 1–10). Heterocycles were well-tolerated, and good enantioselectivities were obtained with 2-furyl and thiophen-2-yl containing substrates (Table 3, entries 11 and 12). The aryl groups of β-keto acids could also be varied, and the reaction was applicable to β-keto acids with different aromatic substituents (Table 3, entries 13–17). Furthermore, the reaction was also applicable to alkyl β-keto acids, and comparable chemical yields and enantioselectivities were attainable (Table 3, entries 18–19). The absolute configurations of the products were assigned by comparing the optical rotation of 3a with the value reported in the literature [48] (see the Supporting Information File 1 for details).

In conclusion, we have developed the first organocatalytic decarboxylative Mannich reaction employing β-keto acids as the donor. The reaction was effectively catalyzed by cinchonine-based bifunctional catalyst C-1, and the synthetically useful β-amino ketones were prepared in excellent yields and with moderate to good enantioselectivities. The method reported represents a new protocol for the asymmetric construction of β-amino ketones.

© 2012 Jiang et al; licensee Beilstein-Institut.
This is an Open Access article under the terms of the Creative Commons Attribution License (http://creativecommons.org/licenses/by/2.0), which permits unrestricted use, distribution, and reproduction in any medium, provided the original work is properly cited.
The license is subject to the Beilstein Journal of Organic Chemistry terms and conditions: (http://www.beilstein-journals.org/bjoc) 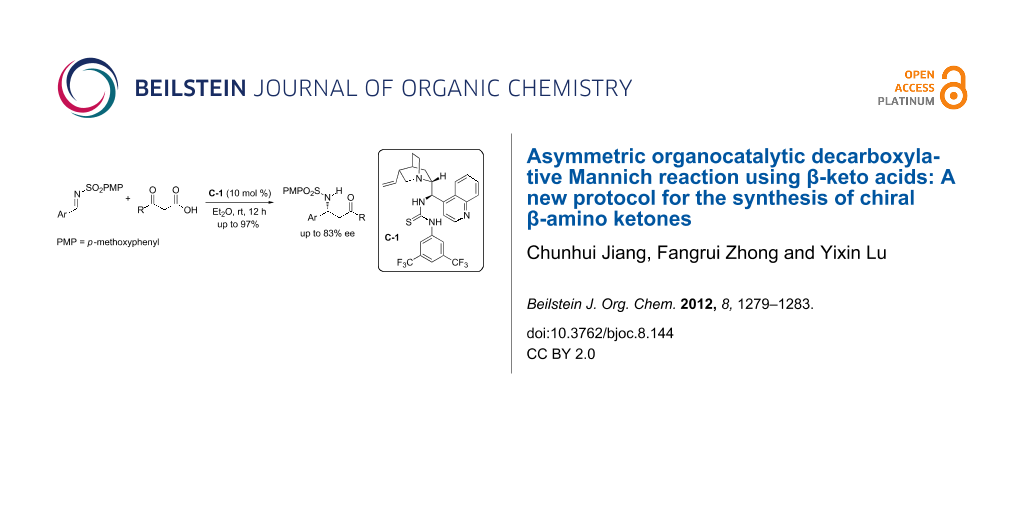