All articles from this author
Anthony Chartoire

This article is part of the Thematic Series "C–H Functionalization".

The use of [Pd(NHC)(cinnamyl)Cl] precatalysts in the direct arylation of heterocycles has been investigated. Among four different precatalysts, [Pd(SIPr)(cinnamyl)Cl] proved to be the most efficient promoter of the reaction. The C–H functionalization of sulfur- or nitrogen-containing heterocycles has been achieved at low catalyst loadings. These catalyst charges range from 0.1 to 0.01 mol % palladium.

As a powerful addition to the classic palladium cross-coupling reactions, C–H bond functionalization has become a growing field of research over the last few years. The ubiquity of C–H bonds makes them a convenient and cost-effective anchoring position within viable substrates, as no derivatisation to form an organometallic reagent is required. Moreover, among the plethora of C–H bonds present on a molecule, it is often possible to target one C–H linkage specifically, taking advantage of directing groups or particular catalyst selectivity [1-5]. Thus, heteroaromatic scaffolds, which are a common feature in biologically relevant compounds and in materials science [6,7] can be selectively arylated as the heteroatom can act as an intrinsic orientating group [8].

Despite the efficiency of well-defined palladium catalysts bearing NHC (N-heterocyclic carbene) ancillary ligands in classical cross-coupling reactions, they have rarely been applied to direct arylation procedures [9-16]. Among the family of [Pd(NHC)] complexes, the [Pd(NHC)(cin)Cl] (cin = cinnamyl) species are known for their ease of activation through the reduction of the metal centre from Pd(II) to Pd(0) [17]. Therefore, we have investigated the use of such precatalysts in the direct arylation of heteroaromatic compounds in order to compare them to ligand-free or phosphine-bearing catalytic systems, and in the end to see whether the reactivity and application scope of these commercially available complexes could be broadened to include C–H bond functionalization transformations.

The study begins with the preparation of the palladium complex 4. Following the strategy recently reported by Markó [23], we were successful in the synthesis of the IPr*Tol·HCl imidazolium salt 5 in a 53% overall yield (see Supporting Information File 1). Subsequently, 5 was treated with KOt-Bu in dry THF to generate the corresponding free carbene in situ. The expected [Pd(IPr*Tol)(cin)Cl] was then obtained in an excellent yield (97%) by a simple fragmentation of the palladium dimer [{Pd(cin)(µ-Cl)}2] using the free carbene solution (Scheme 1).

The newly synthesized complex 4 was unequivocally characterised by X-ray diffraction [24] (Figure 2, Supporting Information File 2 and Supporting Information File 3) after suitable crystals were grown from slow diffusion of hexane in dichloromethane. Based on this crystal structure, the percentage buried volume (%VBur) of the IPr*Tol ancillary ligand was determined by using the “SambVca” web application [25] and compared to complexes 1–3 (Table 1) [21]. IPr*Tol featured a %VBur in the same range as IPr* (+0.4% difference). SIPr and IPr have been reported as less hindered ligands with %VBur of 37.0 and 36.7, respectively. The length of the Pd–C1 bond in 4 was also examined and is close to the one observed in 3.

With complexes 1–4 in hand, their catalytic activity towards the direct arylation of heteroaromatic compounds was evaluated. For this purpose, the arylation of benzothiophene (6) with 4-bromotoluene (7) was selected as a benchmark reaction (Table 2). This C–H functionalization, initially described by Ohta [26], was then reported by Bhanage and Mori using 2–10 mol % of well-defined palladium catalysts [27,28] (Figure 3). Alternatively, Fagnou and Kappe proposed a Pd/phosphine system involving 1–2 mol % of palladium and 2–4 mol % of phosphine [29,30], but no example of this reaction involving a well-defined [Pd(NHC)] complex has been described. However, it is noteworthy that variously substituted benzothiophene cores have been extensively studied in the direct arylation process [4,31-37].

aConversion of the starting material into C–H arylated product determined by GC, [6] = 0.3 M.

Initial screening of precatalysts 1–4 was performed with a 2 mol % loading, by using KOt-Bu as the base, which is known to efficiently activate the [Pd(NHC)(cin)Cl] precatalysts [17]. DMA was selected as the solvent and the reaction was conducted at 140 °C.

This survey showed that 1 is the most efficient precatalyst under these reaction conditions with 76% conversion of the starting material. Precatalysts 2 and 4 exhibited closely related activity, with 50 and 49% conversion, respectively. However, complex 3 gave relatively poor conversion of the benzothiophene (6).

Thus, selecting 1 as the best precatalyst, the use of other solvents, bases and additives was evaluated to optimize the reaction (see the Supporting Information File 1). From this optimization study, it was found that 0.1 mol % of 1 with K2CO3 in DMA as solvent at 140 °C in the presence of a catalytic amount of pivalic acid (30 mol %) generated the best reaction conditions. Under these optimized parameters, a second precatalyst screening was performed. As shown in Table 3, better activity was observed for precatalysts 1 and 2, which have smaller ligands when compared to the NHCs in 3 and 4. This result suggests a strong dependence of the activity on the steric properties of the NHC ligand. Moreover, the small difference between 1 and 2 underlines the fact that the difference in the σ-donation properties of the NHC ligands [38-41] is not likely to play a crucial role in the catalytic activity.

aConversion of the starting material into C–H arylated product determined by GC, [6] = 0.3 M.

In comparison with the previously mentioned methodologies to perform this C–H functionalization [27-30], the catalyst loading can be decreased by at least 10-fold without drastically affecting the yield (Table 4, entry 1). Using the optimized reaction conditions, we examined the scope and the limitations of this catalytic system using various aryl bromides and heterocycles (Table 4). It appeared that the sterics of the aryl bromide had almost no impact on the reaction. Indeed, para-, meta- and ortho- substituted aryl bromides could be employed to arylate 6 in good yields. (Table 4, entries 1–3, 77–89%). However, ortho-disubstituted aryl bromide, such as bromomesitylene appeared to be too sterically demanding and led to no conversion (data not shown). Concerning the electronic properties of the aryl bromide, electron-withdrawing (EWG) and electron-donating groups (EDG) were tolerated, although the presence of EWGs resulted in decreased yields (Table 4, entries 4–6, 49–70%). The substrate 4-bromobenzaldehyde was also successfully involved in the direct arylation of 6. Despite its electron-withdrawing nature as well as its high reactivity, the expected biaryl was obtained in moderate yield (Table 4, entry 7). The limits of the scope were determined by switching from benzothiophene (6) to the more sterically demanding 3-methylbenzothiophene (9) (Table 4, entries 8–10). Closely related reactivity was observed for 6 and 9, as these were arylated in comparable yields (Table 4, entry 1 vs 8, 3 vs 9 and 6 vs 10).

A more challenging heterocycle, 2-methylthiophene (11), was investigated. Simple thiophene rings are known to be less reactive in C–H functionalization reactions [42]; nevertheless, 11 was successfully arylated in moderate to good yields, depending on the electronic properties of the bromobenzene substituents (Table 4, entries 11–13, 57–90%). Electron rich 4-methoxybromobenzene reacted more efficiently than the electron poor 4-fluorobromobenzene. An opposite effect of the electronics was observed by Doucet et al. in their ligandless procedure at low catalyst loadings [43,44]. This is surely due to the nature of the catalyst and thus offers complementary direct arylation methods for thiophene derivatives.

To complete the study, experiments were performed at lower catalyst loading using imidazopyridine (13). This class of substrate has recently been involved, by Doucet et al. [45], in direct arylation with a catalytic charge of Pd(OAc)2 ranging from 0.1 to 0.01 mol %. In our case, comparable yields were obtained when the catalyst loading was decreased from 0.1 to 0.01 mol %, highlighting the high efficiency of the catalytic system (Table 4, entries 14 and 15). Following the same trend as reported by Doucet [45], a better reactivity was observed with bromobenzenes substituted with EWGs compared to with EDGs (Table 4, entries 16 and 17).

In summary, we report here the synthesis and characterization of a new member of the [Pd(NHC)(cin)Cl] family, [Pd(IPr*Tol)(cin)Cl]. The catalytic activity of this family of complexes was surveyed in the direct arylation of heterocycles. The bulkiness of the NHC ligand appears to play a major role in the catalytic efficiency, whereas the σ-donation properties (within the small electronic space examined) have little influence. Among the four complexes, [Pd(SIPr)(cin)Cl] exhibited the highest catalytic efficiency and was investigated for the arylation of various benzothiophenes, thiophene and imidazopyridine. C–H functionalization of such heterocycles was performed in moderate to good yields by using only 0.1–0.01 mol % of precatalyst. This study highlights the fact that [Pd(NHC)(cin)Cl] complexes are multipurpose precatalysts as they may be utilised in various cross-coupling and, now, C–H-bond-functionalization reactions.

General procedure for the direct arylation of heterocycles

We gratefully acknowledge the EPSRC and the ERC (Advanced Researcher Award-FUNCAT) for funding. We thank the EPSRC National Mass Spectrometry Service Center in Swansea for mass spectrometric analyses. Umicore AG is acknowledged for its generous gifts of material. S.P.N. is a Royal Society Wolfson Research Merit Award holder.

© 2012 Martin et al; licensee Beilstein-Institut.
This is an Open Access article under the terms of the Creative Commons Attribution License (http://creativecommons.org/licenses/by/2.0), which permits unrestricted use, distribution, and reproduction in any medium, provided the original work is properly cited.
The license is subject to the Beilstein Journal of Organic Chemistry terms and conditions: (http://www.beilstein-journals.org/bjoc) 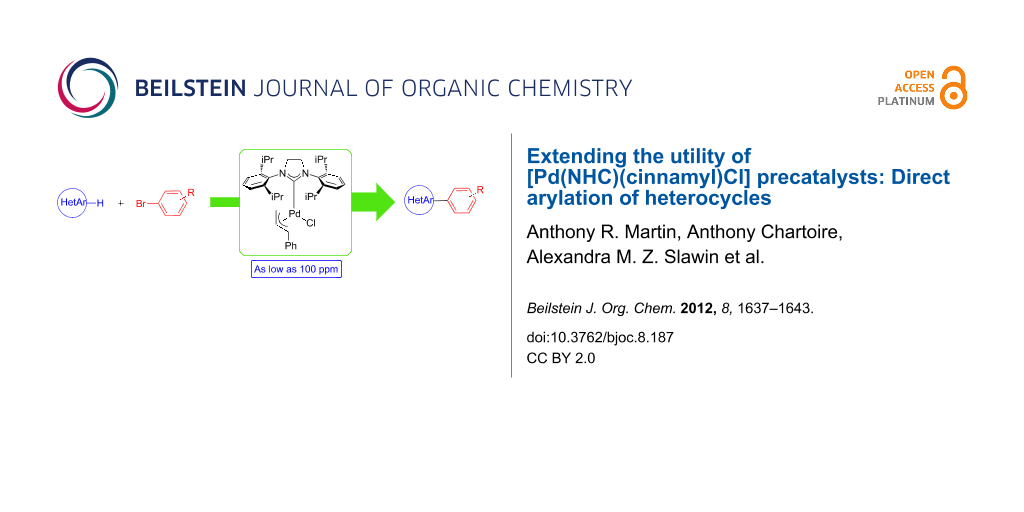