Design and synthesis of a photoswitchable guanidine catalyst


All articles from this author
Stefan Hecht

A novel design as well as a straight-forward synthesis for a photoswitchable guanidine catalyst is reported. Intense studies of the photochromic properties demonstrated the reversible switchability of its photosensitive azobenzene moiety. Its activity in the ring-opening polymerization (ROP) of rac-lactide was investigated as well. The obtained results are discussed, and an additional guanidine was synthesized and utilized in the ROP of rac-lactide in order to explain the findings.

The macroscopic properties of a given polymer, e.g., the glass-transition temperature, morphology, density and tensile strength, are strongly dependent on its microscopic structure. It is well known that this structure, which is characterized by parameters such as molecular weight and distribution, composition, regiochemistry and stereochemistry (tacticity), critically depends on the interaction between catalyst and monomer during the polymerization process. Gaining control over these processes has therefore been the subject of intense research efforts. With this in mind, chemists have recently started to incorporate gates into catalysts to control their action through external stimuli. The use of light as such an external, noninvasive, and well-controlled stimulus perhaps represents the most attractive approach to controlling catalytic activity and selectivity due to the attainable high spatio-temporal resolution [1]. In order to create such photoswitchable catalysts [2], photochromic moieties [3-5] have to be incorporated into the catalyst system [6-13]. To the best of our knowledge, successful examples of photoswitchable catalysts for the ring-opening polymerization (ROP) of lactide have not been reported thus far, although a remarkable example of a photocaged system has been reported [14].

Metal-based catalysts as well as organocatalysts have been widely studied in the ROP of lactide [15]. Guanidines, and especially 1,5,7-triazabicyclo[4.4.0]dec-5-ene (TBD), have proven to be very powerful in this context (Scheme 1) [16]. However, due to the discussion of several polymerization mechanisms [17], TBD is a difficult target for the incorporation of photoresponsive switches. Recent work indicates that the activation mechanism for acyclic guanidines, such as guanidine 1 (Scheme 1), is strongly dependent on the formation of hydrogen bridges to monomer and initiator [18]. Note that with pyrenebutanol as the initiator, 200 repeat units are grown within 20 s by using TBD as the catalyst, while 1 h is needed with the acyclic guanidine 1 to reach the same average chain length.

Based on this finding it should be possible to create a catalyst that may be deactivated by formation of intramolecular hydrogen bonds to an acceptor (A) and activated by light-triggered dissociation of such intramolecular hydrogen bonds (Scheme 2). Herein, we report the synthesis of the first photoswitchable guanidine, as well as its photochromic behavior. Upon irradiation, the incorporated azobenzene is supposed to undergo photoinduced E→Z isomerization, allowing the Brønsted acceptor, in this case a ketone, to form a hydrogen-bridge to the proton of the guanidine.

The synthesis of guanidine 2E (Scheme 3) was accomplished starting from phenylisocyanate (3) and 3-nitroaniline (6). The latter was converted by known procedures into its corresponding nitroso derivative 7 [19], followed by a Mills coupling with 4-aminoacetophenone (8) to give azobenzene 9 in 93% yield over two steps. Nitroazobenzene 9 was transformed into its amino derivative 10 by catalytic hydrogenation. Note that under the employed conditions reduction of the azobenzene function of compound 9 was observed, yet the formed hydrazine analogue reoxidized in situ upon being stirred under atmospheric conditions (air). The free amine 10 finally reacts with the in situ prepared Vilsmeyer salt 5 to provide the desired target compound 2E. The therefore necessary urea 4 can be obtained from the addition of pyrrolidine to phenylisocyanate (3).

The structure of guanidine 2E was proven by NMR spectroscopy, HRMS, as well as by single-crystal X-ray structure analysis (Figure 1). To our knowledge, this is the first example of an X-ray analysis of an acyclic guanidine–methanol adduct, clearly proving the existence of a hydrogen bridge between an alcohol OH function and the nitrogen of the guanidine. This significantly supports the mechanism of alcohol activation in the polymerization process. Additionally, the crystal structure confirms the validity of our concept, illustrating the azobenzene’s utilization as a spacer by spatial separation of the guanidine core and carbonyl function.

In order to utilize the incorporated light-sensitive azobenzene functionality, the photochromic behavior of guanidine 2 was investigated by UV–vis spectroscopy (Figure 2). The UV–vis spectrum of guanidine 2E in acetonitrile exhibits the expected behavior, similar to the unsubstituted parent azobenzene, i.e., a low intensity n→π* band in the visible region and a much stronger π→π* band in the UV region of the spectrum. Note that the n→π* band partially overlaps with the π→π* band in the (E)-isomer. Upon irradiation at 340 nm (Figure 2a), the π→π* band of the isomer 2E at 326 nm vanishes and the π→π* band of the isomer 2Z with its blue-shifted maximum at 273 nm appears. The content of isomer 2Z in the photostationary state (pss) was determined to amount to 61% by UPLC using a detection wavelength on the isosbestic point (290 nm). Based on this data, the UV–vis spectrum of the isomer 2Z was calculated (Figure 2d), assuming that the total absorption is the sum of the partial absorptions. Obviously, the significant hypsochromic shift of the π→π* band leads to a separation of the n→π* and π→π* bands for the (Z)-isomer. As expected, an inverse behavior is observed upon irradiation at 254 nm, inducing photoisomerization of guanidine 2Z back to its precursor 2E (Figure 2b). The amount of isomer 2E in the resulting pss was determined to be 94%. The same nearly quantitative Z→E photoisomerization, giving 92% of 2E in the pss, is obtained upon irradiation at 430 nm.

Related to the supposed function of guanidine as a switchable catalyst, these experiments demonstrate the reversible photoisomerization of the azobenzene moiety. Nevertheless, the switching properties can still be improved, in particular to obtain a pss with higher (Z)-content in the E→Z photoisomerization. Besides the photo-induced Z→E isomerization, the thermal back-reaction of guanidine 2Z was examined as well (Figure 2c). Based on the measured UV–vis and UPLC data and assuming a first-order rate law, the rate constant of the thermal Z→E isomerization at 40 °C was determined to be k(40 °C) = 6.3·10−5 s−1 corresponding to a half-life of τ1/2 = 3 h. The measurement at slightly elevated temperature (40 °C) was necessary since at 25 °C the thermal half-life increases significantly (Supporting Information File 1, Figure S-5), leading to distinct difficulties in its determination, e.g., the evaporation of the solvent and the resulting change in concentration. Therefore, the rate constant and thermal half-life at 25 °C could only be estimated by using data points from the first 36 h (Supporting Information File 1, Figure S-6) yielding k(25 °C) = 4.2·10−6 s−1 and τ1/2 = 46 h. Consequently, the half-life significantly exceeds the expected duration of the polymerization reaction [18], rendering guanidine 2 very attractive for this purpose. In summary, the observed photochromic behavior detailed above indicates promising properties for the utilization of guanidine 2 as a photoswitchable catalyst.

In order to determine the activity of the catalyst, the crystal-bound methanol was removed and guanidine 2E was utilized in the ROP of rac-lactide with pyrenebutanol as the initiator. In a catalyst/initiator/monomer ratio of 1:1:100 no significant formation of polylactide was observed at rt even after 48 h. The absence of reactivity for guanidine 2E in the ROP of rac-lactide may have various origins. First of all, it is obvious that in comparison with catalytically active guanidine 1, the two cyclohexane substituents on the nitrogen atoms of guanidine are replaced by aromatic residues, which, at least in one case, is necessary for connecting the photochromic azobenzene moiety to the guanidine core. This replacement most likely results in a significant reduction of the basicity of guanidine. Additionally, the acceptor ketone moiety itself may interact with the initiator or the active end of the polymer chain, thereby interfering with catalysis. In order to examine the latter, guanidine 11 was synthesized from Vilsmeyer salt 13 and aniline and tested in the ROP of rac-lactide (Scheme 4). The morpholino substituent was introduced to improve the crystallization behavior of guanidine and should not affect the polymerization.

In a catalyst/initiator/monomer ratio of 10:1:100 with pyrenebutanol as initiator no significant formation of polylactide was observed at rt even after 48 h. This indicates that the catalytic inactivity of guanidine 2E is indeed caused by the guanidine core itself. Besides the previously mentioned basicity issue, a possible reason for this behavior may be discerned from the single-crystal X-ray structure analysis of guanidine 2E. It can be seen that, in contrast to the supposed polymerization mechanism (Figure 3a) [18], the lone pair of the nitrogen and the hydrogen of the adjacent nitrogen are not arranged in a parallel manner, i.e., unidirectional facing the substrates (Figure 3b). If the observed conformation is not caused by stacking effects in the solid state and prevails in solution, it may substantially lower the catalytic activity of the guanidines 2E and 11.

In summary, we developed a new approach to the design and synthesis of the novel, photoswitchable guanidine 2. After detailed investigation of its photochromic properties and demonstrating its reversible, light-induced switchability, we started to investigate the reasons for its inactivity in the ROP of lactide. Our efforts are now directed toward the improvement of the design of the catalyst by exchanging one aromatic residue with an alkyl substituent to improve the basicity of guanidine, as well as by introducing sterically crowded substituents or ring constraints in order to direct the position of the relevant lone pair of guanidine as well as the NH-function.

The crystal structure has been deposited at the Cambridge Crystallographic Data Centre and allocated the deposition number CCDC 891016.

We thank Stefan Mebs (HU Berlin) for carrying out the single-crystal X-ray analysis. Generous support by the German Research Foundation (DFG via SPP 1178) and the European Science Foundation (ESF via P2M) is gratefully acknowledged. We thank BASF AG, Bayer Industry Service, and Sasol Germany for donations of chemicals.

© 2012 Viehmann and Hecht; licensee Beilstein-Institut.
This is an Open Access article under the terms of the Creative Commons Attribution License (http://creativecommons.org/licenses/by/2.0), which permits unrestricted use, distribution, and reproduction in any medium, provided the original work is properly cited.
The license is subject to the Beilstein Journal of Organic Chemistry terms and conditions: (http://www.beilstein-journals.org/bjoc) 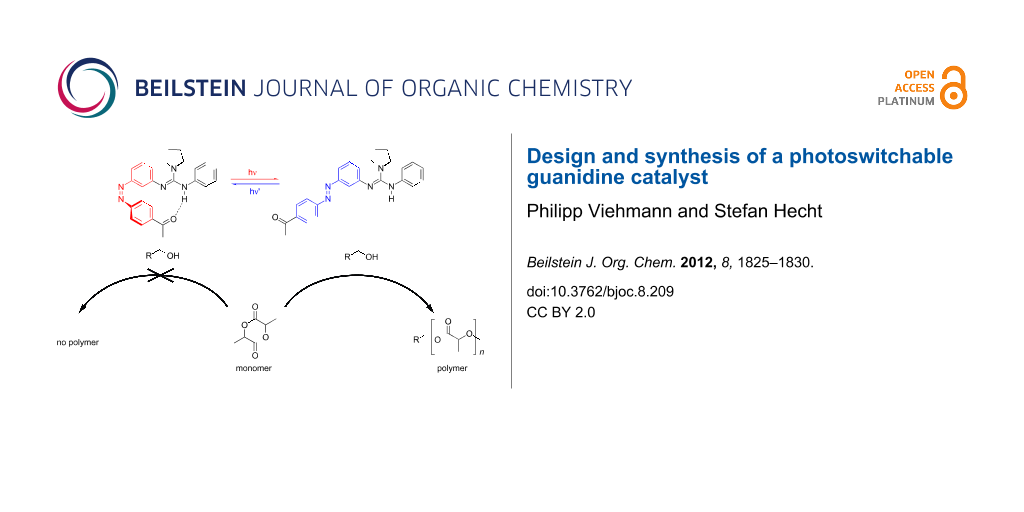