All articles from this author
Tsubasa Shizuno


All articles from this author
Takashi Otani


All articles from this author
Takanori Shibata

This article is part of the Thematic Series "C–H Functionalization".

[RhCp*(OAc)2(H2O)] [Cp* = pentamethylcyclopentadienyl] catalyzed the C–H bond amidation of ferrocenes possessing directing groups with isocyanates in the presence of 2 equiv/Rh of HBF4·OEt2. A variety of disubstituted ferrocenes were prepared in high yields, or excellent diastereoselectivities.

Ferrocene and its derivatives are among the most useful organometallic compounds because of their chemical and thermal stabilities, structures, and redox activity [1,2]. One of the most remarkable applications of ferrocene derivatives is as chiral ligands [3,4]. A variety of chiral ferrocenyl ligands with several substitution patterns have been successfully utilized for enantioselective catalysis in both academia and industry. In particular, planar chiral 1,2-disubstituted ferrocenyl scaffolds have been extensively studied, and are among a few premier chiral ligand structures. For instance, a 1,2-disubstituted ferrocenyl ligand, Xyliphos ((R)-1-[(S)-2-(diphenylphosphanyl)ferrocenyl]ethyl bis(3,5-dimethylphenyl)phosphane) is used for iridium-catalyzed enantioselective hydrogenation to produce the herbicide (S)-metolachlor on a scale of more than 10000 tons/year [5].

Pentamethylcyclopentadienyl (Cp*)Rh(III) is known to catalyze electrophilic activation of aryl C–H bonds, typically in the presence of an acetate ligand, and is used for oxidative C–C-bond-formation reactions [13]. Recently, several reports of cationic Cp*Rh(III)-catalyzed nonoxidative C–C-bond-formation reactions have been disclosed [14-22]. For example, Ellman et al. and Shi et al. reported that Cp*Rh(III) complexes catalyzed the reaction of aryl C–H bonds to imines, isocyanates, and aldehydes by directed electrophilic activation of aryl C–H bonds at relatively low temperature and under oxidant-free conditions [15-21]. We also reported that cationic Cp*Ir(III) complexes, combined with 1 equiv/Ir of Cu(OAc)2, catalyzed the directed C–H activation of aryl C–H bonds at room temperature [23]. In this manuscript, we report application of this nonoxidative Rh(III) catalysis to synthesize planar chiral 1,2-disubstituted ferrocene derivatives.

We chose the reaction of ferrocenyl imine 1a and phenyl isocyanate as a model reaction and screened several catalysts (Table 1). The cationic Cp*Ir(III) catalyst, which was used in our previous report [23], did not catalyze the reaction at all (Table 1, entry 1). Under copper-salt-free conditions, cationic Cp*Ir(III) catalyst did not give the product, but cationic Cp*Rh(III) selectively afforded monoamidated 1,2-disubstituted ferrocene derivative 2a, albeit in low yield (Table 1, entries 2 and 3). The catalyst with BF4− anion showed the highest activity (Table 1, entries 3–5). The reaction also proceeded in the presence of an isolated cationic Cp*Rh catalyst, which simplifies the reaction setup and is required to prevent the redox reaction between AgBF4 and 1a [24]. However, the use of [RhCp*(MeCN)3](BF4)2 [17] resulted in lower yield likely due to the coordination of MeCN (Table 1, entry 6). The yield significantly increased when the combination of [RhCp*(OAc)2(H2O)] [25] and 2 equiv/Rh of HBF4·OEt2 was used to form dicationic Cp*Rh species in situ (Table 1, entry 7) [26].

We examined a variety of isocyanates under the same reaction conditions given in entry 7 in Table 1 except with a lower catalyst loading of [RhCp*(OAc)2(H2O)]. The reaction proceeded smoothly with 5 mol % of [RhCp*(OAc)2(H2O)] along with a slight decrease of yield (Table 2, entry 1). Both electron-rich and -poor aryl isocyantes showed similar reactivity in the present reaction (Table 2, entries 2 and 3). The use of benzyl isocyanate also formed the monoamidated product 2d (Table 2, entry 4). It required a longer reaction time, but alkyl isocyanates were also available.

We next examined a diastereoselective reaction using a commercially available chiral oxazolyl ferrocene 1b, and the reaction was conducted under the same reaction conditions used in Table 2. Several isocyanates were submitted to the reaction with 1b, and planar chiral 1,2-disubstituted ferrocenes 3a–f were obtained with high diastereoselectivity, but the yields in all cases were moderate because of a low conversion ratio (Table 3). Lower coordination ability of the oxazolyl group compared to the imino one probably decreased the reactivity. The absolute configuration of planar chirality in 3c was determined to be S by X-ray crystallography (Figure 1). The absolute configuration is consistent with the previous report of diastereoselective ortho-lithiation of 1b [27].

In conclusion, a Cp*Rh(III)-catalyzed reaction between ferrocenyl C–H bonds and isocyanates was developed to synthesize a variety of 1,2-disubstituted ferrocenes. The use of the commercially available chiral oxazolyl ferrocene enabled us to synthesize planar chiral 1,2-disubstituted ferrocenes with excellent diastereoselectivity. The present reaction is a rare example of catalytic methods to construct planar chiral ferrocenes. We are currently investigating an enantioselective reaction.

© 2012 Takebayashi et al; licensee Beilstein-Institut.
This is an Open Access article under the terms of the Creative Commons Attribution License (http://creativecommons.org/licenses/by/2.0), which permits unrestricted use, distribution, and reproduction in any medium, provided the original work is properly cited.
The license is subject to the Beilstein Journal of Organic Chemistry terms and conditions: (http://www.beilstein-journals.org/bjoc) 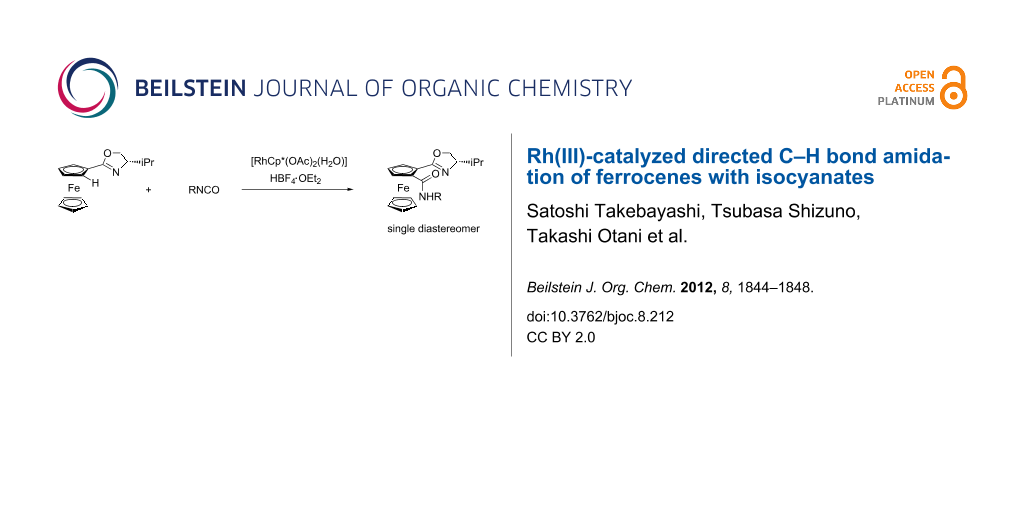