Electrochemical generation of 2,3-oxazolidinone glycosyl triflates as an intermediate for stereoselective glycosylation


All articles from this author
Akito Shibuya


All articles from this author
Yoshihiro Saigusa


All articles from this author
Shino Manabe


All articles from this author
Yukishige Ito

Glycosyl triflates with a 2,3-oxazolidinone protecting group were generated from thioglycosides by low-temperature electrochemical oxidation. The glycosyl triflates reacted with alcohols to give the corresponding glycosides β-selectively at low temperatures. However, α-selectivity was observed in the absence of base at elevated reaction temperatures. In situ generated triflic acid promotes the isomerization of β-products to α-products.

Stereoselective formation of glycosidic linkages is the key issue in oligosaccharide synthesis, because both 1,2-trans and 1,2-cis aminoglycosides are ubiquitous in biologically active oligosaccharides [1-5]. The 1,2-trans aminoglycosides, which are found in Nod factor [1] and lipid A [2], can be easily prepared by protecting the 2-amino group with phthaloyl or carbamate groups [6]. On the other hand, 1,2-cis glycosidic linkages are still difficult to make with perfect stereoselectivity. Although 2-azido-substituted glycosyl donors are commonly used for the preparation of 1,2-cis glycosidic linkages of amino sugars [7,8], the selectivity highly depends on the nature of the glycosyl acceptors and reaction conditions. In the last decade, 2,3-oxazolidinone protected 2-amino-2-deoxy-glycosides have been developed as glycosyl donors for the stereoselective synthesis of amino sugars [9-24]. These glycosyl donors afford the corresponding glycosides in a 1,2-trans or 1,2-cis selective manner by action with various types of glycosyl acceptors. However, it is still uncertain whether glycosyl triflate intermediates [25], which were detected by NMR, play an important role in the stereoselective formation of both α- and β-isomers.

Using electrochemically generated glycosyl triflate 2a, the stereoselectivity of the glycosylation was investigated by the addition of five equiv of various alcohols (Table 2). In accordance with our previous results [26,29], high β-selectvity was observed with highly reactive alcohols (Table 2, entries 1 and 2). On the other hand, less nucleophilic alcohols, such as benzyl alcohol and CF3CH2OH, gave the corresponding glycosides in lower β-selectivity than methanol or ethanol (Table 2, entries 3 and 4) [31].

Next, we examined the electrochemical activation of thioglycoside 1a to generate glycosyl triflate 2a in the presence of glycosyl acceptor 7. In order to improve the yield and the stereoselectivity of glycosylation, we examined the effects of the reaction temperature and base (Table 3). Although poor β-selectivity and yield were observed at low temperatures in the absence of a base (Table 3, entry 1), the addition of an organic base such as 2,6-di-tert-butyl-4-methylpyridine (DTBMP), significantly improved the β-selectivity and yield (Table 3, entry 2). In both cases small amounts of the α-isomers of the starting thioglycoside 9 and glucal 10 were obtained as byproducts (Table 3, entries 1 and 2). The yield was further increased and the formation of byproducts was suppressed by raising the reaction temperature to 0 °C (Table 3, entry 3). On the other hand, the corresponding α-isomer of disaccharide 8α was obtained as a major product together with the anomerized donor 9 when the reaction was performed at 0 °C in the absence of DTBMP (Table 3, entry 4). These anomerizations may be caused by the endocyclic cleavage reaction [22-24], which is often observed for pyranosides with a 2,3-trans carbamate group, under acidic conditions. The yield of disaccharide 8 was improved by raising the temperature to 0 °C after the completion of electrolysis at −78 °C (Table 3, entry 5). The fact that disaccharide 8 was obtained in higher yields (59% to 78%) and that only a trace amount of α-isomer 9 (4%) was obtained strongly suggests that the isomerization of thioglycoside donor 1a occurs during the electrolysis at 0 °C. It is noteworthy that the α- and β-glycosides could be selectively prepared from the same glycosyl donor with a 2,3-trans carbamate group, simply by changing the reaction conditions.

adetermined by 1H NMR; b1a (ca 15%) was recovered; cyields are based on 1a; d5.0 equiv; ethe reaction temperature was raised after electrolysis; f1a (ca 6%) was recovered.

In order to confirm that the anomerization of 8β to 8α could take place under the reaction conditions, we examined the acid-mediated isomerization of the β-isomer of disaccharide 8β to the α-isomer 8α (Scheme 2). Triflic acid (TfOH) must be generated in situ by the reaction of glycosyl triflate 2a with alcohols. Thus, TfOH (1.0 equiv) and tetrabutylammonium triflate (Bu4NOTf) (5.0 equiv), which was used as a supporting electrolyte for electrolysis, were added to a CH2Cl2 solution of the β-isomer of disaccharide 8β at 0 °C. After stirring at 0 °C for 1 h, the reaction was quenched by the addition of Et3N. The α-isomer of the disaccharide 8α was obtained in 83% yield as a single isomer. This experiment shows that the α-product 8α is the isomerization product of the β-isomer 8β as a result of endocyclic cleavage, as shown in Scheme 2.

In conclusion, we have achieved the electrochemical generation and accumulation of glycosyl triflates equipped with the 2,3-oxazolidinone protecting group. This glycosyl triflate intermediate reacted with alcohols of high reactivity to afford β-glycosides as kinetic products. The α-products were also obtained at elevated temperatures after anomerization of the β-products, as both Oscarson and our group have previously reported [18,22-24]. Namely, α- and β-glycosides were obtained from 2,3-oxazolidinone donors by changing the reaction conditions. Further investigations to reveal the scope and limitations of the glycosylation reaction using electrochemically generated glycosyl triflates are in progress in our laboratory.

This work was financially supported in part by the Grants-in-Aid for Scientific Research on Innovative Areas (No. 2015) from the MEXT. S. M. thanks Grants-in-Aid for Scientific Research (C) from JSPS (grant number 21590036) and Ms. Akemi Takahashi for her technical assistance. T. N. thanks Meiji Seika Kaisha, Ltd. Award in Synthetic Organic Chemistry. The authors thank Dr. Keiko Kuwata and Ms. Sakiko Goto for MS analyses.

© 2012 Nokami et al; licensee Beilstein-Institut.
This is an Open Access article under the terms of the Creative Commons Attribution License (http://creativecommons.org/licenses/by/2.0), which permits unrestricted use, distribution, and reproduction in any medium, provided the original work is properly cited.
The license is subject to the Beilstein Journal of Organic Chemistry terms and conditions: (http://www.beilstein-journals.org/bjoc) 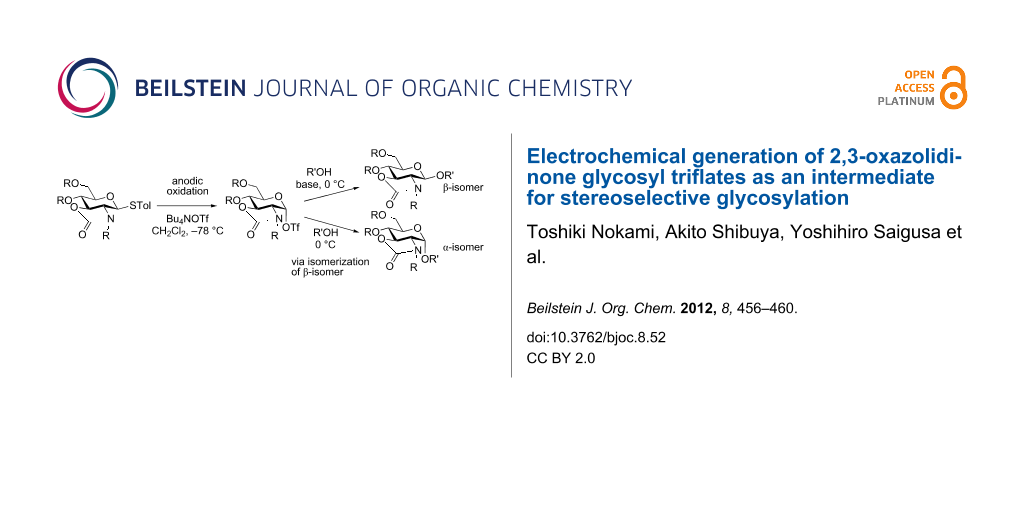