Identification and isolation of insecticidal oxazoles from Pseudomonas spp.


All articles from this author
Veronika Dill


All articles from this author
Andrea Dowling


All articles from this author
Edna Bode


All articles from this author
Narisara Chantratita


All articles from this author
Richard ffrench-Constant

This article is part of the Thematic Series "Biosynthesis and function of secondary metabolites".

Two new and five known oxazoles were identified from two different Pseudomonas strains in addition to the known pyrones pseudopyronine A and B. Labeling experiments confirmed their structures and gave initial evidence for a novel biosynthesis pathway of these natural oxazoles. In order to confirm their structure, they were synthesized, which also allowed tests of their bioactivity. Additionally, the bioactivities of the synthesis intermediates were also investigated revealing interesting biological activities for several compounds despite their overall simple structures.

In order to determine the genus of the producing strain PB22.5, we sequenced its 16S-rRNA gene revealing it to be a Pseudomonas sp. with closest homology to P. putida (100% similarity: Supporting Information File 1, Figure S4) [11-14].

Labeling experiments were performed in order to confirm the oxazole structures and to reveal their biosynthesis. Therefore, both strains were cultivated in fully labeled 13C or 15N media and 12C precursors were added (Figure 2).

Five carbons of leucine are incorporated in compound 3, while eight carbons of compound 5 originate from phenylalanine, which confirms these moieties to be amino-acid derived (Figure 3).

Ten carbons and one nitrogen of tryptophan were incorporated in all oxazoles, confirming the indole moiety to be derived from tryptophan. Surprisingly, no incorporation of carbon from tryptamine was observed, and the fact that nitrogen labeling also occurs when 14N-tryptamine, leucine or phenylalanine is fed indicates an efficient transaminase activity in both strains, as one would indeed expect for a bacterial strain living on proteinogenic substrates such as insects. Indole acetaldehyde was also fed in 13C-labeled medium, but, in this case as well, no incorporation was observed (data not shown).

Thus, indolepyruvate or an unknown degradation product thereof is proposed as a precursor for the indole moiety. Unfortunately, the production of 7 and 8 was insufficient for analysis in the labeled media, but the nature of the side chains was concluded from a fatty-acid analysis of the producing strain, which showed only straight-chain fatty acids (data not shown).

In order to confirm the structure of all oxazole derivatives, to compare their retention times, and to provide enough material for bioactivity tests, oxazoles 3–6 and 8 were synthesized. Briefly, the respective tryptamine derivatives were formed, which were then oxidized at the alpha-position with the help of 2,3-dichloro-5,6-dicyano-1,4-benzoquinone (DDQ) and cyclized to give the oxazoles by using phosphorylchloride as described [9]. Additionally, three nonnatural derivatives were synthesized to get a more diverse set of oxazole derivatives differing from the natural compounds by unusual (compound 9 and 10) or very long (compound 11) acyl chains.

Additionally, the synthetic intermediates were also tested as precursors in labeling experiments as described above, but again no incorporation could be observed. Thus, the biosynthesis via tryptamine amides, which are subsequently oxidized and cyclized to give the oxazoles, can be excluded and more experiments are needed to fully elucidate the biosynthesis of these simple heterocyclic compounds.

All synthesized compounds and intermediates thereof were tested for their biological activity, as a broad range of activities has already been described for these oxazoles, including anticonvulsant and antithrombotic activity as well as activity against human lung and pancreas cancer cell lines [9,10,17].

We tested the bioactivity against the human breast-cancer cell line MCF-7, using the XTT assay [18], and against insect hemocytes from the greater wax moth Galleria melonella according to the method described by Proschak et al. [19]. Three oxazole compounds show LD50 [µg ml−1] values against Galleria hemocytes of 30 (compound 3), 1.7 (compound 6), and 103 (compound 9) (Table S7). Compounds 3, 5, 6, and 9 are active in the MCF-7 assay with EC50 [µg ml−1] values of 58, 363, 26, and 34, respectively. Similar to previous results [19], several tryptamine amide derivatives (20–24, 26) showed cytotoxic activity against the MCF-7 cells with 24 being the most potent compound (1.02 µg ml−1). Interestingly, 26 also showed activity against Galleria hemocytes, although its oxazole derivative 10 did not, which may point to different targets for both compound classes.

The class of oxazole compounds, which were identified in this article, are not only prevalent in Pseudomonas but also in other bacteria such as Streptomyces [20] or Streptoverticillium [8,10], suggesting a biological relevance also in these bacteria. However, as concluded from the observed activity against insect cells, they could significantly add to the overall insecticidal activity of the investigated Pseudomonas strains.

Work in the Bode lab was supported by the LOEWE Schwerpunkt Insektenbiotechnologie, the European Community's Seventh Framework Programme (FP7/2007-2013) under grant agreement no. 223328, which also supported work in the ffrench-Constant and Chantratita labs, and the Deutsche Forschungsgemeinschaft (DFG).

© 2012 Grundmann et al; licensee Beilstein-Institut.
This is an Open Access article under the terms of the Creative Commons Attribution License (http://creativecommons.org/licenses/by/2.0), which permits unrestricted use, distribution, and reproduction in any medium, provided the original work is properly cited.
The license is subject to the Beilstein Journal of Organic Chemistry terms and conditions: (http://www.beilstein-journals.org/bjoc) 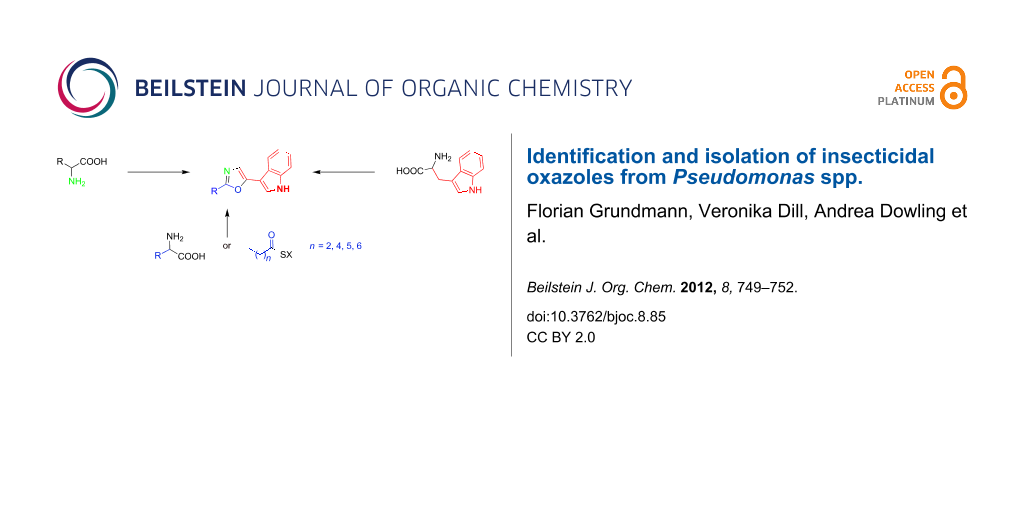