Organophosphorus compounds are important in organic chemistry. This review article covers emerging, powerful synthetic approaches to organophosphorus compounds by homolytic substitution at phosphorus with a carbon-centered radical. Phosphination reagents include diphosphines, chalcogenophosphines and stannylphosphines, which bear a weak P–heteroatom bond for homolysis. This article deals with two transformations, radical phosphination by addition across unsaturated C–C bonds and substitution of organic halides.

Organophosphorus compounds constitute an important class of compounds in a wide range of applications in organic chemistry, as reagents, intermediates, ligands, bioactive agents, and functional materials [1-4]. The synthesis of organophosphorus compounds has therefore been extensively investigated (Scheme 1). Classical methods to form a C–P bond include ionic reactions such as nucleophilic substitution of P–X compounds with organometallic reagents, nucleophilic substitution of alkyl halides with phosphorus nucleophiles, and nucleophilic addition to polar unsaturated bonds. Recent advances in transition-metal catalysis have realized catalytic cross-coupling reactions of aryl halides with H–P compounds [5-7] and catalytic addition to nonpolar unsaturated carbon–carbon bonds [8-11]. In the field of radical chemistry, the addition of phosphorus radicals, mainly from H–P compounds, onto carbon–carbon multiple bonds [12-15] has held a special position since they provide transformations unattainable by polar reactions.

Stannylphosphines of the type R3Sn–PR’2 are known to undergo radical addition to carbon–carbon unsaturated bonds. Schumann reported the addition of diphenyl(triphenylstannyl)phosphine to allyl chloride, styrene, and phenylacetylene (Scheme 3) [22,23]. The addition is most likely to proceed via a radical process as the absence of AIBN leads to considerable decreases in yield. Mitchell then reported that diphenyl(trimethylstannyl)phosphine reacts not only with terminal alkynes but also with internal alkynes and allenes (Scheme 4) [24,25]. It is noteworthy that the regioselectivity of the radical addition to propynamide is opposite to that of the relevant ionic Michael addition. Considering the regioselectivity, these addition reactions naturally involve C–P bond formation by homolytic substitution at phosphorus (Scheme 5). Studer recently reported similar silylphosphination of phenyl vinyl sulfone with Me3Si–PPh2 [26].

Tzschach reported that tetraorganodiphosphines R2P–PR2 add to phenylacetylene under UV irradiation or upon heating in the presence of AIBN (Scheme 6) [27]. The reaction consists of the addition of a diorganophosphanyl radical to phenylacetylene and the homolytic substitution of tetraorganodiphosphine with the resulting vinyl radical to afford the adduct and to regenerate the initial diorganophosphanyl radical (Scheme 7). The high E selectivity is attributable to kinetic control of the homolytic substitution, where R2P–PR2 preferentially approaches the vinyl radical from the roomier side. Although the transformation looks useful to construct an (E)-1,2-diphosphanylethene skeleton, the scope of alkyne is limited to phenylacetylene and the reactions result in unsatisfactory yields because of the instability of the products as well as the diphosphines in air.

A more general, facile, and reliable method for diphosphination was later reported by Yorimitsu and Oshima, which utilizes diphosphines generated in situ from chlorophosphine and hydrophosphine in the presence of triethylamine [28]. A variety of terminal alkynes undergo the radical diphosphination (Table 1). The diphosphination was applicable to the synthesis of a new push–pull-type molecule that emits blue fluorescence (Scheme 8). The initially formed diphosphanylethylene derivatives are not very stable in air, and therefore sulfidation or oxidation was performed to accurately assess the efficiency of the diphosphination reactions.

Ogawa independently reported similar diphosphination under UV irradiation (Table 2) [29,30]. The reactions favor the formation of Z isomers, which results from photoinduced isomerization of initially formed E isomers. Ogawa’s diphosphination is thus potentially useful for the synthesis of (Z)-1,2-diphosphanyl-1-alkenes, which can serve as bidentate ligands.

Morse developed photoinduced addition of tetrafluorodiphosphine to alkenes and alkynes in the gas phase (Table 3) [31-34]. The addition provides a series of intriguing bidentate phosphine ligands. The addition to alkynes yields 1:1 mixtures of E/Z isomers. Due to the high reactivity of a difluorophosphanyl radical, considerable polymerization takes place unless substrates or olefinic products are reasonably inert.

Yorimitsu and Oshima reported radical addition of a P–S bond across alkyne by using diphenyl(organosulfanyl)phosphine (Table 4) [35]. The addition proceeds mainly in an anti fashion to afford the adducts bearing a sulfanyl group at the terminal carbon and a phosphanyl group at the internal carbon. The reaction mechanism is similar to that in Scheme 7 (Scheme 9). The regioselective outcome suggests that the homolytic substitution occurs exclusively at phosphorus, not at sulfur. A sulfanyl radical is liberated to add the terminal carbon of alkyne. To reverse the regioselectivity in radical addition of a P–S bond, S-thiophosphinyl O-ethyl dithiocarbonates were created, although the reversed addition excludes homolytic substitution at phosphorus (Scheme 10) [36].

Kawaguchi, Nomoto, and Ogawa seminally studied the photoinduced radical chalcogenophosphination of alkynes and allenes by means of PhCh–ChPh/Ph2P–PPh2 binary systems (Ch = S, Se, Te) [30,37-39]. The regioselective outcome of the photoinduced thio- and selenophosphination of terminal alkynes (Table 5) is similar to that of the thermal thiophosphination (Scheme 9). Detailed mechanistic studies revealed that comproportionation between PhSe–SePh and Ph2P–PPh2 occurs smoothly to generate PhSe–PPh2 as the actual reactive species. Selenophosphination of terminal allene affords (2-phenylselenyl-2-alkenyl)diphenylphosphine regioselectively (Scheme 11). Notably, the sense of the regioselectivity of tellurophosphination by a PhTe–TePh/Ph2P–PPh2 system is opposite to those of the thio- and selenophosphination (Scheme 12). This reversal indicates that homolytic substitution at tellurium overwhelms that at phosphorus and that a diphenylphosphanyl radical is more reactive than a phenyltelluranyl radical.

After scattered research efforts into the uncontrolled radical C–H phosphination under harsh reaction conditions [40], Barton elegantly devised radical decarboxylative phosphorylation of carboxylic thiohydroxamic mixed anhydrides (Scheme 13) [41]. Radical addition of a phenylsulfanyl radical to the thiocarbonyl generates the corresponding alkyl radical R•, which undergoes homolytic substitution at the phosphorus of P(SPh)3 to furnish (PhS)2P–R as the initial product (Scheme 14). Oxidative addition of the disulfide byproduct to the initial product furnishes a pentavalent phosphorus species that is eventually hydrolyzed to an S,S-diphenyl dithiophosphonate upon workup.

Barton also reported that white phosphorus reacts with N-acyloxythiopyridones, so-called Barton PTOC esters (Scheme 15) [42]. Photolysis of the esters in the presence of white phosphorus followed by oxidation with hydrogen peroxide yields alkylphosphonic acid. The efficient phosphination would stem from the highly strained structure and the weak P–P bonds of white phosphorus.

Phosphination of alkyl halides as substrates results in unsatisfactory yields. Instead, Barton’s alkyl imidazole-1-carbothioates are good substrates for this radical phosphination (Table 7). Conversion of an optically pure cis-carbothioate leads to trans-aminophosphine of potential use as a ligand (Scheme 17). Diphosphine approaches the resulting radical from the opposite side of the NHBoc group to invert the original stereochemistry.

Studer developed in 2007 new elegant reagents Me3Sn–PPh2 and Me3Si–PPh2 for radical phosphination [44]. The scope of his phosphination with Me3Sn–PPh2 is wide as summarized in Table 8. Although the low toxicity of Me3Si–PPh2 is advantageous, phosphination with Me3Si–PPh2 is limited to alkyl halides or imidazole-1-carbothioate. Density functional theory calculations have clarified the homolytic substitution process is a two-step mechanism via a tetracoordinated phosphorus atom (Figure 1). The spin density in the tetracoordinated phosphorus intermediate is localized mostly on the Sn atom while the remaining spin density is found in the equatorial position of the distorted trigonal prismatic P atom.

The rate constant for phosphination of an aryl radical with Me3Sn–PPh2 is calculated to be ca. 9 × 108 M−1s−1 by competition kinetics with Bu3SnH reduction [45]. This large rate constant allows for stereospecific trapping of axially chiral acyl radicals with Me3Sn–PPh2 (Scheme 18). Chemodivergent trapping of diastereomers of an N-(2-cyclohexenyl)acetanilide derivative is interesting (Scheme 19). One isomer undergoes direct phosphination while the other cyclizes prior to phosphination.

Intermolecular phosphinative radical addition of alkyl iodides to activated alkenes proceeds in the presence of Me3M–PPh2 (M = Sn, Si) and V-40 (Table 9) [26]. Secondary and tertiary alkyl iodides participate in the addition reaction while primary alkyl iodide results in direct phosphination prior to the expected addition. Not only acrylate ester but also acrylamide, vinyl sulfone, and acrylonitrile are good radical acceptors in this addition.

Studer’s stannylphosphine technology is reliable enough to be applied to the construction of interesting π-conjugated frameworks. In collaboration with Yamaguchi, Studer invented a new radical reagent (Me3Sn)2PPh for the synthesis of highly strained bis(phosphoryl)-bridged biphenyls (Scheme 20) [46]. Subsequently, Liu reported an efficient synthesis of bis(phosphoryl)-bridged ladder triphenylene by means of the radical clipping with (Me3Sn)2PPh (Scheme 21) [47]. In light of the increasing importance of phosphoryl-bridged π-conjugated skeletons in organic material sciences, (Me3Sn)2PPh will serve as a key reagent.

Cummins devised radical phosphination of bromobenzene or bromocyclohexane with white phosphorus by means of a trivalent titanium complex (Scheme 23) [49]. This represents a unique direct method for preparing triorganophosphine without recourse to any trivalent phosphorus sources such as PCl3.

Preparation of this article and parts of synthetic chemistry in this article were supported by JSPS and MEXT (Grants-in-Aid for Scientific Research, Nos. 24685007, 23655037, 22106523, and 24106721 “Reaction Integration”) and by The Uehara Memorial Foundation, NOVARTIS Foundation for the Promotion of Science, Kinki Invention Center, and Takeda Science Foundation. Special thanks are given to those listed as the coauthors in our papers cited herein, particularly to Dr. Akinori Sato, Dr. Azusa Kondoh, and Professor Koichiro Oshima for their invaluable contributions.

© 2013 Yorimitsu; licensee Beilstein-Institut.
This is an Open Access article under the terms of the Creative Commons Attribution License (http://creativecommons.org/licenses/by/2.0), which permits unrestricted use, distribution, and reproduction in any medium, provided the original work is properly cited.
The license is subject to the Beilstein Journal of Organic Chemistry terms and conditions: (http://www.beilstein-journals.org/bjoc) 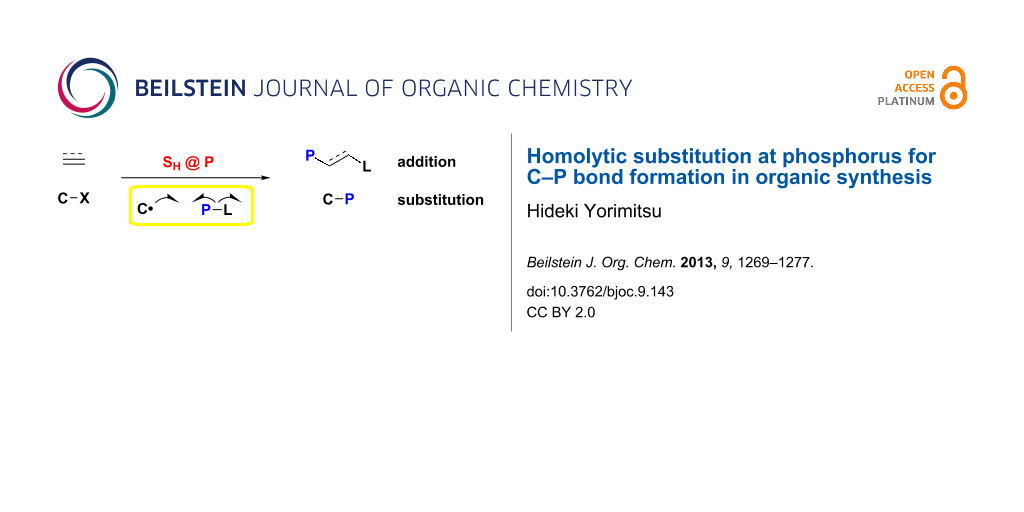