All articles from this author
Andrei Dascalu


All articles from this author
Mariana Pinteala


All articles from this author
Bogdan C. Simionescu


All articles from this author
Cezar Ungurenasu

Full characterization of fullerenol C60(OH)24 by HPLC ESI-MS in negative and positive ionization modes was achieved. Fragmentor voltage and capillary voltage were optimized in order to obtain a good signal stability and the best peak intensity distribution for the fullerenol C60(OH)24 in both negative and positive modes. While the predominant base peak observed for C60(OH)24 in the negative ionization mode was [M − H]− at m/z 1127, those observed in the positive mode were multiply charged [M − H2O + 4H]4+ at m/z 279 and [M − 12H2O + 2NH3 + 6H]6+ at m/z 158.

Because of their potential for chemical tunability and exciting range of biological activities as glutamate-receptor antagonists [1] and antiproliferative [2,3], neuroprotective [4-7], and anticancer agents [8-13], polyhydroxylated [C60]fullerenes, C60(OH)x, have received much attention in recent years. However, to the best of our knowledge, except for the compositionally and structurally well characterized C60(OH)24, prepared by alkaline hydrolysis of C60Br24 [14,15], most of these fullerenols are not pure C60(OH)x, but a complex mixture of products with an average composition of C60(OH)x–y, C60Ox(OH)y [16-19] or C60(OH)x(ONa)y [20].

Therefore, the HPLC separation and accurate measurement of the molecular weight for structure characterization by electrospray ionization mass spectrometry (ESI-MS) have become essential for fullerenol research. Fullerenols C60(OH)18–44 are very small neutral molecules with the highest density of hydroxy groups on a given particle surface (up to 10.7 OH/nm2) [21] achieved so far, complicating spectra acquisition if the correct conditions are not used. Initial attempts made by Isaacson et al [22] in 1994 to develop mass-spectrometric methods for fullerenols using ESI-MS with commercially available C60(OH)24 and C60(OH)22–24 dissolved in acidic, basic, and neutral solutions did not produced ions diagnostic of C60(OH)x. Afterwards, very few isolated attempts have been made on the identification of fullerenols [23] and/or their derivatives [24-28] by ESI-MS analysis, and very little detail was provided. We carried out an experimental investigation on ESI-MS of fullerenol C60(OH)24 over a wide range of total capillary and fragmentor voltages.

Herein, we are happy to report the first experimental evidences that fullerenols are ESI-MS-inactive compounds in aqueous media at low and medium capillary and fragmentor voltage under negative ionization conditions, but they are ESI-MS-active compounds in aqueous and ammonia media, in both negative and positive ionization mode at a capillary voltage of 4.5 kV and a fragmentor voltage of 400 V with no C60-cage fragmentation.

For naming these individual radical species using “yl” and “oxyl” suffixes the terms fullerenyl for radicals generated by the loss of HO• (M1 in Scheme 1) and fullerenoxyl for radicals generated by the loss of H• (M2 in Scheme 1) will be used (IUPAC 2002) [29]. Radical anions formed by electron addition to a fullerenyl radical shall be described as fullerene carbanions and referred to as fullerenide anions (M3 in Scheme 1) and [mM + ne]m–n∙ shall be described as molecular anions. As regards to the observation of distonic fullerenyl-fullerenate M7 ions, such distonic dehydroalcoxide radical anions, namely dehydrophenoxide radical anions, were first observed by Bowie et al [30] and recently investigated by ESI-MS by Mariappandar et al [31].

The negative-ion ESI-MS spectra and ionization data of C60(OH)24 in ultrapure water and in the presence of small amounts of aqueous ammonia will be discussed here.

Formation of these ions can be rationalized by the mechanisms shown in Scheme 1 and graphically depicted in Scheme 3. One can suppose that, in the electrospray source, M1-fullerenyl and M2-fullerenoxyl radicals are formed by neutral cleavage of C–OH and O–H bonds, respectively. As soon as fullerenyl radicals M1 containing a total of less than eight odd electrons with random distribution are generated, they readily capture free electrons present in the gas (due to cosmic rays or background radiation) to form fullerenide carbanion M3, while the fullerenoxyl radicals M2 do not capture free electrons, thus generating fullerenate anions M4. While only a few M1-fullerenyl radicals were detected as distonic anions [M(m) − nH2O − yHO• − 3H]3−y• at m/z 309, 335 and 781, fullerenoxyl radicals are much more resistant against free electrons and can be identified as abundant singly and multiply charged molecular anions containing up to 12 fullerenoxyl odd electrons.

A particular case is the abundant distonic anion [M − 4H2O − 8HO• − 4H• −4H]4−12• at m/z 227 (entry 13 in Table 1, and C in Scheme 3), which appears to contain four fullerenoxyl radicals and eight fullerenyl radicals. In fact, the partial π-bond reconstruction by rehybridization and redistribution of odd fullerenyl electrons of intermediate C should account for the distonic anion G. The structure of the species [M − xH2O − yHO• + ye − zH](z+y)− depicted as a high-range of relative abundance in the mass spectra, due to a loss of protons from fullerenyl-carbanion-containing species M3, could be assigned to fullerenide-fullerenate carbanion species M6 (B and D in Scheme 3).

Consecutive losses of m/z 17 units are attributed to the neutral loss of nOH radicals (n = 2–48), followed by the rehybridization and redistribution of odd electrons of fullerenyl radical anion, accounting for the formation of a final molecular anion [2M − 48OH + 2e]2− as observed at m/z 720 and depicted in Scheme 2. Taking into account the moderate electron affinity of fullerenols [32,33] and the fact that earlier extensive studies focused on pristine fullerene anion radicals [34-37] unquestionably confirmed their generation by electron transfer from various electron donors (aliphatic and aromatic amines especially) [38,39], one can postulate that, under ESI conditions, a distonic radical carbanion [(C60(OH)24−•)2]2−• is first generated by electron transfer from H2N− produced by ammonia ionization and then undergoes consecutive OH radical losses and electron redistribution until the entire reconstruction of the electronic structure of pristine fullerene is achieved.

With regard to molecular species and their stability, the positive-ion spectra of fullerenol in the presence of aqueous ammonia were significantly different from the negative-ion spectra. While the relative intensities of 2- to 6-protonated fullerenol with dilute 2 × 10−2 M ammonia aqueous solution were about threefold smaller than those observed under negative ionization conditions, the relative intensities recorded in the presence of 10 μL 3 × 10−1 M ammonia solution were about tenfold smaller than in the negative mode.

The relative intensity of singly protonated fullerenol [M + H]+ (9%) at m/z 1129 was very low (Supporting Information File 1, entry 5 in Table S1 and C in Scheme 4). On the other hand, while under negative-ionization-mode conditions abundant [M(n) + H2O(m) − xH]x− clustered ions with medium and high intensity are formed up to n = 6 and m = 66, only very few dimers, one tetramer and one pentamer with very low intensity were observed under positive-mode conditions.

It is demonstrated here that electrospray mass spectrometry is a perfectly suitable method to study fullerenol C60(OH)24 in pure water and in the presence of aqueous ammonia solution in the negative and positive ionization modes, under the optimal capillary and fragmentor voltage. While the predominant base peak observed for C60(OH)24 in the negative-ionization mode was [M − H]− at m/z 1127, those observed in the positive mode were multiply charged [M − H2O + 4H]4− at m/z 279 (100%) and [M − 12H2O + 2NH3 + 6H]6+ at m/z 158 (96%).

In addition to simple bond cleavages, fullerenol ions containing at least eight fullerenyl radicals undergo an unanticipated gas-phase rearrangement that involves the partial (in the negative mode from pure aqueous media) or total (in the positive mode and negative mode from ammonia aqueous solutions) π-bond reconstruction of the C60 cage by rehybridization and redistribution of odd electrons of fullerenyl radicals to form C60 anions or cations, respectively.

HPLC separation was performed on a chromatographic system Agilent 1200 series separation module equipped with a binary pump, heated column compartment, autosampler and diode array detector. Separations were achieved using a new Agilent Zorbax SB-C18 reverse phase column (4.6 mm × 150 mm, 5 μm particle size) with a column temperature kept at 35 °C. Using a 20 μL injection volume, the fullerenol C60(OH)24 was monitored through UV detection at 280 nm for a total runtime of 30 minutes at a flow rate of 1 mL/min. Because the fullerenol C60(OH)24 is sparingly soluble in alcohols and acetonitrile, ultrapure water was used as the mobile phase for the HPLC separation and ESI-MS measurements, in negative- and positive-ionization mode. The mobile phase was filtered through a 0.45 μm filter and degassed for 30 minutes by sonication.

A typical chromatogram of the aqueous solution of C60(OH)24 (see Supporting Information File 1, Figure S1a) indicates a very small peak at approximately 1.5 min retention time, corresponding to contaminants from the sample, and a major peak at 2.6 min, corresponding to the analyte. The blank chromatogram (see Supporting Information File 1, Figure S1b) showed no peaks in the HPLC beside the solvent front. Hence, it is a clear evidence that the used column allows separation of C60(OH)24, and it is clear that fullerenol is essentially an individual pure compound.

Mass spectrometry results were obtained using an Agilent 6520 Series Accurate-Mass Quadrupole Time-of-Flight (Q-TOF) LC/MS. The solutions were introduced into the electrospray ion source (ESI) after HPLC separation via a 4:1 splitter at a flow-rate of 0.2 mL/min. During the experiments, the following Q/TOF MS parameters were optimized: electrospray ionization (positive- and negative-ion mode), drying gas (N2) flow rate, drying-gas temperature, nebulizer pressure, capillary voltage, and fragmentor voltage. The mass scale was calibrated by the standard calibration procedure with compounds provided by the manufacturer. Data were collected and processed by using MassHunter workstation data acquisition software for the 6200/6500 series, version B.01.03. The calculated m/z values are based on the weight of the most abundant isotopes (monoisotopic mass).

The first experiments studied the effect of ESI source parameters and mobile phase composition on the formation of fullerenol C60(OH)24 ions under negative and positive ionization mode. The fragmentor voltage and capillary voltage were the first parameters to be optimized because they have the greatest impact on the sensitivity and fragmentation. Consequently, the first objective was to find the optimum values for the fragmentor and capillary voltage that provides a strong molecular ion and a good relative abundance. The use of high voltages generates a greater signal, but this needs to be balanced with an increased background-to-noise ratio at the higher corona-current settings.

To optimize the conditions for obtaining maximum intensity, the capillary voltage was varied between 2.0 and 4.5 kV and the fragmentor voltage was varied between 100 and 400 V. Typical values for the other source parameters were: drying gas (N2) flow rate 8.0 L/min; drying-gas temperature 325 °C; nebulizer pressure 35 psig, skimmer 58 V and the octopol RF 750 V. The full-scan mass spectra of the investigated compounds were acquired in the range m/z 100–3000. The results are summarized in Figure S2 in Supporting Information File 1 showing the ESI-MS reference grid for C60(OH)24 as a function of fragmentor and capillary voltage in negative- and positive-ionization modes.

© 2013 Silion et al; licensee Beilstein-Institut.
This is an Open Access article under the terms of the Creative Commons Attribution License (http://creativecommons.org/licenses/by/2.0), which permits unrestricted use, distribution, and reproduction in any medium, provided the original work is properly cited.
The license is subject to the Beilstein Journal of Organic Chemistry terms and conditions: (http://www.beilstein-journals.org/bjoc) 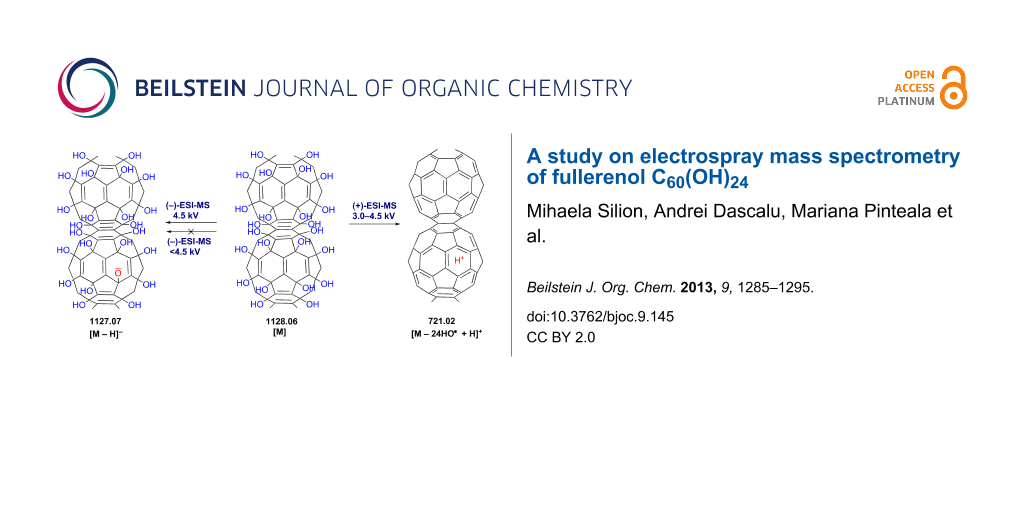