All articles from this author
Eriko Yoshida


All articles from this author
Masako Hamano

γ-Lactams exist in many natural products and biologically active compounds and are one of the most important classes of compounds for drug discovery [1-3]. Substituted γ-lactams, in particular, have potential application in drug synthesis, but the development of stereoselective synthesis of chiral γ-lactams remains a challenge [4,5]. Developing effective and simple synthetic methods is important so that the drug candidates can be screened. A stereoselective addition to a γ-lactam skeleton provides a direct and efficient method for synthesizing various γ-lactam derivatives. However, the most commonly used methods for synthesizing chiral γ-lactams are based on the cyclization or cycloaddition of N-containing precursors, which are synthesized stereoselectively, and there are limited studies on the stereoselective additions to γ-lactam skeletons [6-8] and no reports on radical addition.

We have already investigated diastereoselective alkyl radical additions to α-methylene-γ-phenyl- γ-lactam and reported that the N-unsubstituted lactam yields cis-α,γ-disubstituted lactams using (Me3Si)3SiH under UV irradiation, whereas the reactions of N-pivaloyllactams with Et3B and Bu3SnH in the presence of Yb(OTf)3 yields trans-α,γ-disubstituted lactams, both reactions involving various alkyl radicals (Scheme 1) [9]. Although this method allows the stereoselective introduction of various substituents into γ-lactams, only γ-phenyl-γ-lactam was used as a substrate. Therefore, we were interested in whether our reaction conditions would be suitable for γ-alkyl substrates and would allow the efficient synthesis of chiral N-containing compounds.

Here, we report cis- and trans-stereoselective radical additions to α-methylene-γ-alkyl- γ-lactams and the synthesis of chiral pyroglutamic acid derivatives using our reaction, starting from a commercially available chiral amino acid.

First, cis-selective isopropyl radical additions to α-methylene-γ-alkyl-γ-lactams were investigated (Table 1). The lactams 1a–1d were synthesized following published procedures [10]. The conditions used in our previous study [9] were used as the starting point, and the reactions of 1a–1d (1 equiv) with isopropyl iodide (3 equiv) in CH2Cl2 by using AIBN (0.2 equiv) as a radical initiator and (Me3Si)3SiH (TTMSS) (2 equiv) as a H-donor were performed at room temperature under UV irradiation. The reactions of 1a and 1b yielded strong cis-diastereoselectivities, but the reactions of 1c and 1d were less diastereoselective.

Next, isopropyl radical additions to N-pivaloyl substrates 3a–3d in the presence of a Lewis acid were investigated (Table 2). The reactions of 3a–3d (1 equiv) with isopropyl iodide (3 equiv) in CH2Cl2 in the presence of Et3B (1 equiv), Bu3SnH (2 equiv), and Yb(OTf)3 (0.5 equiv) were performed at −78 °C. The reactions of 3a, 3c, and 3d were almost nondiastereoselective, while that of 3b was cis-selective. The selectivity was almost the same as when the reaction was performed without a Lewis acid (Table 2, entry 3). Using an excess of Yb(OTf)3 did not affect the diastereoselectivity (Table 2, entry 2).

We then changed the protecting group of the lactam nitrogen from the pivaloyl to the acetyl group and investigated the reaction in the presence of a Lewis acid (Table 3). The reactions of 5c and 5d yielded strong trans-selectivities, but cis-selectivities were observed in the reactions of 5a and 5b. The use of MgBr2–OEt2 instead of Yb(OTf)3 enhanced the yield but did not affect the diastereoselectivity (Table 3, entry 2).

The direction of hydrogen transfer from the H-donor (n-Bu3SnH or TTMSS) to the intermediate radical determined the stereochemistry of the product. In the case of the reaction of unprotected lactam by using a bulky H-donor (Table 1), hydrogen transferred from the opposite side of the γ-alkyl group and the cis-product was obtained. The less hindered primary isobutyl or phenethyl substrates (1c or 1d) yielded poorer stereoselectivities than did 1a or 1b. Trans-selectivity was expected for the amide type N-protecting group reaction because of the coordinating carbonyl oxygens. The carbonyl oxygen of lactam and that of the N-protecting group (pivaloyl or acetyl) bidentately coordinate to the Lewis acid to form a six-membered chelate. The Lewis acid coordinates from the opposite side of the γ-alkyl group, and hydrogen transfer occurred from the same face as the γ-alkyl substituent to give trans-selectivity. However, strong trans-selectivities were not observed for substrates with pivaloyl groups, and it appears that steric hindrance between the pivaloyl group and the lactam γ-alkyl disturbs chelation. Using the acetyl group, which is less sterically hindered than the pivaloyl group, improved the chelate formation of γ-isobutyl or γ-phenethyl substrates and the reactions of 5c and 5d were trans-selective. In contrast, relatively bulky isopropyl or cyclohexyl groups could not form the six-membered chelate because of the steric repulsion between the acetyl and tertiary alkyl group (Figure 1).

Finally, we attempted to synthesize the chiral pyroglutamic acid derivatives starting from a commercially available chiral amino acid. The reaction of benzaldehyde and (S)-phenylglycinol in the presence of MgSO4 (used as a dehydrating reagent) gave a chiral imine, and the subsequent Reformatsky reaction with bromide 7 afforded butyl acrylate 8 as a single diastereomer [11,12] (Scheme 2). Hydrolysis with CF3CO2H and converting the hydroxy group to the chloride yielded the corresponding lactam 9 [13]. The chiral auxiliary was removed by DBU-assisted elimination to the enamine and subsequent hydrolysis [14]. Introducing the pivaloyl group, because N-pivaloyl gave high trans-selectivity of γ-phenyl substrate, yielded the chiral radical substrate 10.

The trans-selective ethyl radical addition proceeded, yielding 11 with high diastereoselectivity, as we previously reported [9]. The trans-isomer was isolated by silica-gel column chromatography. The N-pivaloyl group on 11 was converted to the Boc group, because ruthenium oxidation did not proceed on using the pivaloyl-protected substrate 11. The phenyl group was oxidized to the carboxylic acid by using ruthenium trichloride [15,16], and the benzylation of the carboxyl group yielded the pyroglutamic acid derivative 13 as a single stereoisomer (Scheme 3).

In this study, we investigated the cis- and trans-stereoselective radical additions to α-methylene-γ-alkyl- γ-lactams. Strong cis-selectivities were observed using various γ-substituents under non-chelating conditions. The reactions of pivaloyl protected substrates in the presence of a Lewis acid were not trans-selective, although pivaloyl protected γ-phenyl substrates gave high trans-selectivity in our previous report. The poor selectivities were attributed to the steric repulsion between the pivaloyl group and the γ-substituent on the substrate. The reactions using N-acetyl substrates instead of pivaloyl substrates yielded better trans-selectivities with γ-isobutyl and γ-phenethyl substrates, because acetyl is sufficiently small to allow chelation with the Lewis acid and lactam carbonyl. We used the reaction to synthesize chiral pyroglutamic acid derivatives starting from (S)-phenylglycinol.

© 2013 Yajima et al; licensee Beilstein-Institut.
This is an Open Access article under the terms of the Creative Commons Attribution License (http://creativecommons.org/licenses/by/2.0), which permits unrestricted use, distribution, and reproduction in any medium, provided the original work is properly cited.
The license is subject to the Beilstein Journal of Organic Chemistry terms and conditions: (http://www.beilstein-journals.org/bjoc) 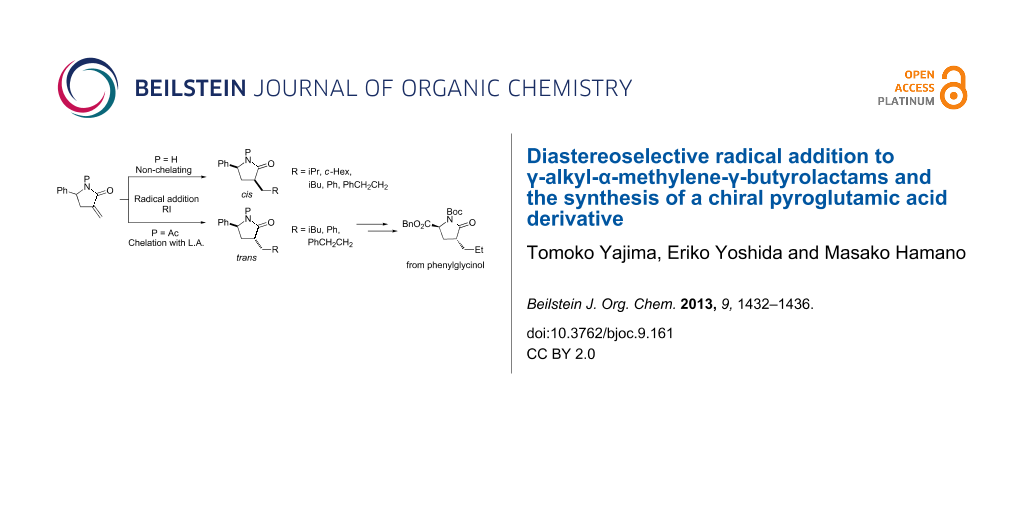