All articles from this author
Hong Fang


All articles from this author
Jianlin Han


All articles from this author
Yi Pan

A Fe(acac)3-catalyzed decarboxylative coupling of 2-(aryl)vinyl carboxylic acids with cycloalkanes was developed by using DTBP as an oxidant through a radical process. This reaction tolerates a wide range of substrates, and products are obtained in good to excellent yields (71–95%). The reaction also shows excellent stereoselectivity, and only trans-isomers are obtained.

Direct C–H functionalization has become one of the most useful and attractive tools in organic chemistry because it can construct carbon–carbon or carbon–heteroatom bonds in a highly atom economical manner [1-8]. Among all these C–H functionalization methods, the direct C(sp3)–H functionalization attracts particular attention due to its low reactivity and challenging activation [9-11]. In previous studies, numerous transition-metal-catalyzed processes, such as Pd [12-18], Cu [19-23], Ru [24-27], Rh [28-31], Co [32-34], Au [35,36], Ir [37-39], Fe [40-43] and other metals [44-47], have been developed for sp3 C–H activation reactions. Additionally, metal-free methodologies, which use TBHP, PhI(OAc)2, TBAI, I2 or Lewis/Brønsted acids, have also been employed for cross-dehydrogenative coupling reactions [48-57].

Owing to the general low reactivity of cycloalkane C(sp3)–H bonds, the direct alkenylation of cycloalkanes with high selectivity and stereospecificity remains a great challenge and attracted a lot of attention in the past years. In 1996, the Fuchs group described the alkenylation of cyclohexane by a radical reaction with vinyl triflone [58]. In 2003, the Yao group reported that styryl cycloalkanes were prepared based on a radical substitution of cyclohydrocarbon units to (E)-β-nitrostyrenes by using the radical initiator benzoyl peroxide [59]. Recently, the Liu group developed a copper-catalyzed decarboxylative coupling of vinylic carboxylic acids with simple alcohols and ethers in high yields. Cycloalkanes were also investigated in this catalytic system, though only moderate yields were obtained [60].

We then examined the substrate scope and limitation of the procedure by reacting cyclohexane with a variety of substituted cinnamic acid derivatives under the optimized conditions (Table 1, entry 8). As shown in Scheme 1, almost all of the tested substrates worked well in this reaction. Several substituents on the aromatic ring were tolerated and the position of these substituents showed almost no effect on the chemical yield. We also observed that electron-donating substituents, such as methyl or methoxy groups at any position of the ring, efficiently took part in the reaction with a slightly decreased yield in case of ortho-substituted products (Scheme 1, 3b–g). Furthermore, a reaction of 2,6-disubstituted cinnamic acid 1m lead to the expected product 3m, which was obtained in a lower yield due to steric hindrance. In addition, heteroaryl-substituted acrylic acids can also be efficiently converted under these conditions. This was shown by the reaction of 3-(thiophen-2-yl)acrylic acid (1p) with cyclohexane furnishing the product 3p in 89% yield. In general, the stereoselectivity of this reaction was excellent and only trans-isomers were obtained in all cases.

Next, other cycloalkanes, including cyclopentane, cycloheptane and cyclooctane, were reacted with different cinnamic acids 1, giving products 4a–f in 83–95% chemical yield (Scheme 2). As already shown for cyclohexane as a substrate, the reaction of other cycloalkanes performs equally well with a variety of cinammic acid derivatives under these conditions. It is noteworthy, that the decarboxylative cross-coupling with cyclooctane showed a higher efficiency than with smaller cycloalkanes.

Finally two control experiments were carried out to shed light on the reaction mechanism. Addition of the radical scavenger 2,2,6,6-tetramethylpiperidine N-oxide (TEMPO) or azobisisobutyronitrile (AIBN) completely inhibited the reaction, and almost no desired product was obtained. Based on these results and literature reports [69,70], a plausible mechanism for the radical oxidative coupling is illustrated in Scheme 3. At the beginning, Fe-catalyzed cleavage of DTBP by Fe(III) in the presence of cinnamic acid, gives tert-butoxy radical A, intermediate B and one acac. Next, a cyclohexane radical C is generated by the reaction between tert-butoxy radical A and cyclohexane. Subsequently, addition of cyclohexane radical C to the α-position of the double bond in B gives intermediate D. Finally, the radical intermediate D is oxidatively decarboxylated by Fe(III) to give product 3, Fe(II) and carbon dioxide. The Fe(III) catalyst is then reformed via DTBP oxidation [71].

In conclusion, an efficient procedure for the Fe(acac)3-catalyzed direct alkenylation of sp3 C–H bonds of cycloalkanes with DTBP as an oxidant has been reported. This method provides a useful strategy for the stereospecific synthesis of substituted E-alkenes. Various cinnamic acids and cycloalkanes are well-tolerated in this catalytic system with good to excellent chemical yields. The mechanism of this reaction has also been studied, and a radical mechanism was proposed. Further studies on the alkenylation of other sp3 C–H substrates are currently investigated in our laboratory.

General procedure for the iron-catalyzed decarboxylative alkenylation of cycloalkanes: To a Schlenk tube equipped with a magnetic stir bar were added Fe(acac)3 (21.2 mg, 0.06 mmol) and cinnamic acid (0.3 mmol) under a nitrogen atmosphere. Cycloalkane (2.0 mL, 15–25 mmol) and DTBP (di-tert-butyl peroxide, 0.6 mmol, 113 μL) were added under a nitrogen atmosphere and the resulting reaction mixture was stirred at 120 °C for 24 h. After cooling to room temperature and removal of volatiles, the products were isolated by flash column chromatography (PE).

We gratefully acknowledge the financial support from the National Natural Science Foundation of China (No. 21102071) and the Fundamental Research Funds for the Central Universities (No. 1107020522 and No. 1082020502). The Jiangsu 333 program (for Pan) and Changzhou Jin-Feng-Huang program (for Han) are also acknowledged.

Igor B. Krylov, Vera A. Vil’ and Alexander O. Terent’ev

Design of indole- and MCR-based macrocycles as p53-MDM2 antagonists

© 2013 Zhao et al; licensee Beilstein-Institut.
This is an Open Access article under the terms of the Creative Commons Attribution License (http://creativecommons.org/licenses/by/2.0), which permits unrestricted use, distribution, and reproduction in any medium, provided the original work is properly cited.
The license is subject to the Beilstein Journal of Organic Chemistry terms and conditions: (http://www.beilstein-journals.org/bjoc) 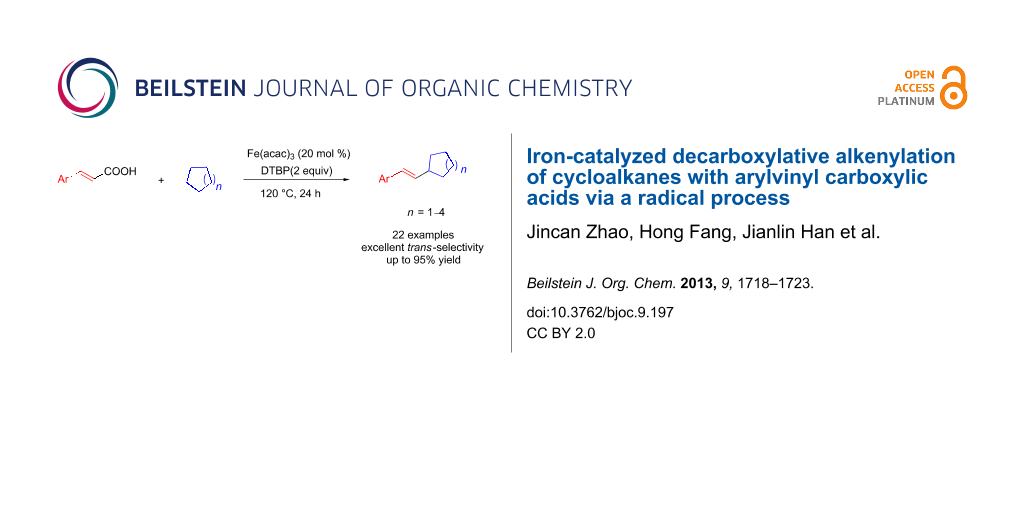