All articles from this author
Ali Khalaf


All articles from this author
Danielle Grée


All articles from this author
Olivier Tasseau


All articles from this author
Fares Fares


All articles from this author
Nada Jaber


All articles from this author
Philippe Lesot


All articles from this author
Ali Hachem


All articles from this author
René Grée

Starting from easily accessible gem-difluoropropargylic derivatives, a DBU-mediated isomerisation affords enones in fair yields with a gem-difluoroalkyl chain. These derivatives were used to prepare pyrazolines and pyrrolines with the desired gem-difluoroalkyl side chain by cyclocondensations in good yields and with excellent stereoselectivity. A one-pot process was also successfully developed for these sequential reactions. By carrying out various types of Pd-catalyzed coupling reactions for compounds with a p-bromophenyl substituent a route to focused chemical libraries was demonstrated.

A widely used strategy in bioorganic, medicinal chemistry and in chemical biology is the selected introduction of fluorine in organic molecules since it strongly modifies their properties [1-9]. On the other hand, heterocyclic molecules – in particular, the so-called privileged scaffolds – are introduced very classically in the core of pharmaceutical products [10,11]. Therefore, it appears to be of much interest to design novel methodologies for the preparation of new fluorinated heterocyclic molecules. We developed a programme to investigate the preparation and uses of new propargylic fluorides [12-14], which have been employed in the synthesis of fluorinated analogues of lipids [15,16] and in carbocyclic systems [17,18]. They have also been used for the preparation of several 5 and 6-membered heterocycles [19-22]. The goal of the present work is to demonstrate that selected propargylic derivatives [23-25] can be employed for the preparation of enones with a gem-difluoroalkyl chain by using an isomerisation process (Scheme 1).

These intermediates can be employed for the preparation of representative 5-membered heterocyclic systems with CF2R side chains by using cyclocondensation reactions. Furthermore, selected molecules in these series were functionalized by using appropriate palladium-catalyzed coupling reactions en route to chemical libraries.

The first example of a base-mediated isomerisation process for an alkyne activated by an ester group was reported by Nineham and Raphael in 1949 [26]. Later, extension to other electrophilic alkynes was demonstrated by Sonye and Koide [27]. Recently, it has been established by Yamazaki’s group that propargylic alcohols bearing a CF3 group on the triple bond could be isomerised to the corresponding enones. In that case, Et3N proved to be sufficient as a catalyst to perform this transformation [28].

The required starting propargylic alcohols were obtained by a reaction of the lithium salt of easily available gem-difluoro propargylic derivative 1 [18] with aromatic aldehydes, affording compounds 2a–2e in 71–82% yields (Scheme 2 and Table 1). With these gem-difluoro intermediates, Et3N was not an efficient catalyst since only a low conversion was observed and the reaction was not clean. On the contrary, the DBU-mediated isomerisation was successful, affording the desired enones 3a–3e in 60–63% yields. The selectivity was excellent since in all cases the E-isomer was obtained almost exclusively (>98%). Similar reactions were carried out with propargylic derivatives bearing alkyl groups instead of the (Ar) aromatic or heteroaromatic group, but these reactions were not successful. Therefore, this reaction appears limited to derivatives with aryl or heteroaryl substituents as in the case of the CF3-substituted propargylic derivatives [28].

Next, we turned towards the preparation of heterocyclic structures from enones 3. Pyrazolines are well-recognized heterocyclic cores for pharmacologically active molecules [29]. Therefore, they were selected as first examples of 5-membered heterocyclic targets with the fluorinated side chain. Reaction of 3a–3e with methylhydrazine gave the desired pyrazolines 4a–4e in 79–86% yields (Scheme 3).

It appeared that the reaction conditions for the synthesis of these pyrazolines were compatible with the first isomerisation step, therefore the possibility of a "one-pot" reaction was considered. Indeed, by heating a mixture of propargylic alcohols 2a–2e with DBU (1,8-diazabicycloundec-7-ene) in the presence of methylhydrazine (Scheme 4) the pyrazolines 4a–4e were obtained after 3–7 h in excellent yields (82–92%, Table 2). This very short and efficient synthesis of pyrazolines 4 can be related to another excellent one-pot reaction with 3-components where the first step is a Pd-catalyzed coupling–isomerisation process followed by a cyclocondensation [30].

Pyrroline is another noteworthy example of a heterocyclic scaffold useful in bioorganic and medicinal chemistry [31,32]. It is also well-recognized for agrochemicals, especially in combination with CF3 substituents. Recently, the group of Shibata has developed an elegant organocatalyzed asymmetric approach to such pyrrolines [33]. Moreover, an efficient synthesis of β-trifluoromethylated Δ1-pyrrolines has been reported [34]. Therefore, we selected pyrrolines with CF2R side chains as a second example of 5-membered heterocyclic targets. Condensation of the anion of glycine ester diphenylimine 5 with the enones 3a–3e afforded the desired pyrrolines 6a–6e (Scheme 4 and Table 3). In all cases good yields were obtained, and a complete selectivity for the trans-isomer was observed as established by NMR analysis of the crude reaction mixtures. This is different from the results obtained by starting from enones with CF2CF2X side chains, where trans/cis mixtures were reported [34]. The 3JHH (6.3–6.5 Hz, trans) of our pyrrolines were very close to those of similar molecules bearing CF2–CF3 chains (6.4–6.6 Hz), while for latter derivatives the cis coupling constants were larger (≥ 8.3 Hz) [34]. This was confirmed in the case of pyrroline 6a by performing additional 19F/1H hOe 2D experiments which revealed strong correlations between the fluorine atoms of the CF2 group and the cyclic protons Hc and Ha (see Scheme 5 and 2D spectrum in the Supporting Information File 1 for details).

The reaction conditions were compatible with both steps and an example of a one-pot reaction was performed starting from 2a–2e. The desired pyrrolines 6a–6e were obtained in excellent yields (71–76%, Scheme 6 and Table 3).

Another important issue was the possibility of using these molecules as scaffolds for the preparation of focused chemical libraries. In order to explore this possibility we developed representative examples of Pd-catalyzed reactions starting from p-bromo derivatives 4e and 6e.

The results are given in Scheme 7 for pyrazoline 4e. Suzuki–Miyaura coupling [35] gave biphenyl derivative 7e in 82% yield, while the Heck [36] and Sonogashira [37] reactions afforded also the desired targets 8e and 9e in 72% and 77% yield respectively. Similar results were obtained in Pd-mediated reactions starting from pyrroline 6e, as indicated in Scheme 8. The desired molecules 10e–12e were obtained in good yields.

In summary, we developed an efficient access to enones with gem-difluoroalkyl side chains through a base-mediated isomerisation of fluorinated propargylic alcohols. Although this method is, to date, limited to compounds with aryl or heteroaryl substituents, corresponding enones appear as versatile intermediates for the preparation of heterocyclic derivatives. This has been established through the synthesis of pyrazolines and pyrrolines with gem-difluoroalkyl side chains. With appropriate substituents, derivatives of this type can be used for the preparation of chemical libraries.

We thank the CNRS and the University of Rennes 1 for financial support. We thank CRMPO (Rennes) for the mass spectral analyses.

© 2013 El Dine et al; licensee Beilstein-Institut.
This is an Open Access article under the terms of the Creative Commons Attribution License (http://creativecommons.org/licenses/by/2.0), which permits unrestricted use, distribution, and reproduction in any medium, provided the original work is properly cited.
The license is subject to the Beilstein Journal of Organic Chemistry terms and conditions: (http://www.beilstein-journals.org/bjoc) 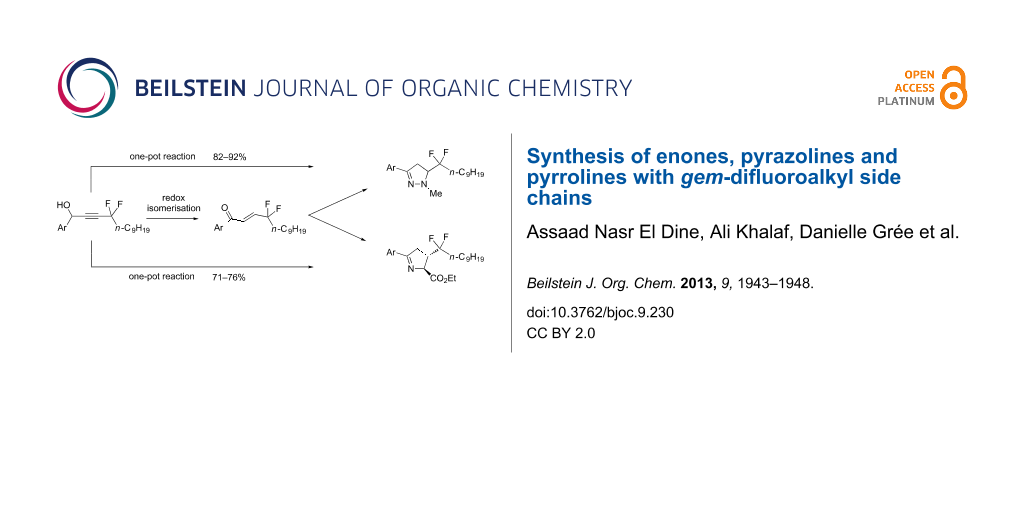