Halogenated volatiles from the fungus Geniculosporium and the actinomycete Streptomyces chartreusis


All articles from this author
Patrick Rabe


All articles from this author
Christian A. Citron

Two unidentified chlorinated volatiles X and Y were detected in headspace extracts of the fungus Geniculosporium. Their mass spectra pointed to the structures of a chlorodimethoxybenzene for X and a dichlorodimethoxybenzene for Y. The mass spectra of some constitutional isomers for X and Y were included in our databases and proved to be very similar, thus preventing a full structural assignment. For unambiguous structure elucidation all possible constitutional isomers for X and Y were obtained by synthesis or from commercial suppliers. Comparison of mass spectra and GC retention times rigorously established the structures of the two chlorinated volatiles. Chlorinated volatiles are not very widespread, but brominated or even iodinated volatiles are even more rare. Surprisingly, headspace extracts from Streptomyces chartreusis contained methyl 2-iodobenzoate, a new natural product that adds to the small family of iodinated natural products.

Today several thousands of halogenated natural products are known, most of them being produced by marine organisms [1]. The majority of halogenated natural products are chlorinated or brominated, while iodinated and particularly fluorinated compounds are significantly less abundant (Table 1) [2]. Reasons for this distribution are (I) the different concentrations of the halogenides in sea water and (II) the differences in their redox potentials [3]. In terrestrial habitats local halogenide concentrations can strongly differ from those found in marine ecosystems, but the overall trend is similar, and therefore chlorine and bromine are also the most widespread halogens in natural products from terrestrial organisms.

aEstimated number of known natural products in 2002 according to reference [2]. bRedox potentials and concentrations in sea water as given in reference [3].

Many biologically active halogenated secondary metabolites are known from actinomycetes including vancomycin [4], chloramphenicol [5], rebeccamycin [6], marinopyrrols [7,8], armeniaspirols [9], and salinosporamide [10]. Also a few volatile halogenated compounds are known, e.g., from algae as summarised in a recent review [11]. Particularly interesting is the production of chloroform by termites that was estimated to account for 15% of the global chloroform emissions [12].

Here we report on the identification of two chlorinated volatile compounds from the fungus Geniculosporium and a iodinated volatile from Streptomyces chartreusis.

The volatiles emitted by agar plate cultures of the fungus Geniculosporium sp. 9910 were trapped on charcoal filters by using a closed-loop stripping apparatus (CLSA) [20]. After one day of collection a solvent extract of the trapped material was analysed by GC–MS. The analytical process was performed three times to demonstrate reproducibility of the results, and a representative chromatogram is shown in Figure 1. Besides the main compound 1 and some structurally related volatiles 2 and 3 that were identified by delinating a structural proposal from the mass spectra followed by synthesis of reference compounds [21], two additional volatiles X and Y were observed in all investigated samples. Their mass spectra are shown in Figure 2.

The six constitutional isomers of a chlorodimethoxybenzene 4a–4f as candidate structures for X are summarised in Figure 3. Compounds 4d and 4e were commercially available, while the remaining isomers were obtained by synthesis according to Scheme 1. Surprisingly, no satisfying synthetic procedure for compound 4a was available from literature, but ortho-lithiation of veratrole (5) followed by treatment with trifluorosulfonyl chloride and triethylamine gave acceptable yields (47%). Conversion of 4-aminoveratrole (6) into the corresponding diazonium salt followed by a Sandmeyer reaction resulted in 4b (61% over two steps). The isomer 4c was efficiently prepared by double methylation of 2-chlororesorcinol (8) with potassium carbonate and methyl iodide in acetone (88%), while 4f was obtained by chlorination of dimethoxybenzene 9 with benzyltrimethylammonium tetrachloroiodate in moderate yield (34%) [22]. All six compounds were subjected to GC–MS analysis using the same type of GC column as for the headspace extract from Geniculosporium (HP5-MS) and their retention indices together with the NMR spectroscopic data are summarised in Table 2. Mass spectra, 1H and 13C NMR spectra of all six compounds are given in Supporting Information File 1. The structure of 4b was unambiguously assigned to the natural product X by comparison of mass spectra and retention indices (Table 2).

For compound Y a series of eleven constitutional isomers as shown in Figure 4 were possible. All eleven compounds were obtained by synthesis as summarised in Scheme 2. The compounds 10a, 10c, and 10e were obtained by treatment of 1,2,3,4-tetrachlorobenzene (11) with sodium methoxide in hot HMPA. This reaction is reported to yield mainly 1,2,3-trichloro-4-methoxybenzene and 1,2,4-trichloro-3-methoxybenzene by monosubstitution [23], but small amounts of disubstitution products were also formed that were rigorously purified from the mixture by repeated column chromatography. Starting from 1,2,3,5-tetrachlorobenzene (12) the same reaction conditions also provided a mixture of mono- and disubstitution products, but the target compounds 10f and 10g were obtained in better yields (29% and 17%). Derivative 10b was prepared from 3,5-dichlorocatechol (13) by methylation with potassium carbonate and methyl iodide in high yield (80%). Accordingly, methylation of 4,6-dichlororesorcinol (14) provided 10h in 80% yield, and methylation of 2,3-dichlorohydroquinone (16), prepared from benzoquinone (15) by treatment with SO2Cl2 under acidic conditions, generated 10i (13% via two steps). Reduction of 2,6-dichlorobenzoquinone with ascorbic acid to the corresponding hydroquinone 18 followed by methylation yielded 48% of 10k. Chlorination of veratrole (5) with two equivalents of benzyltrimethylammonium tetrachloroiodate resulted in 10d (45%), while the same procedure starting from 1,4-dimethoxybenzene gave access to 10j (38%). The NMR spectroscopic data and results of GC–MS analyses for all eleven dichlorodimethoxybenzenes in comparison to the volatile Y are summarised in Table 3. All mass spectra, 1H and 13C NMR spectra are shown in Supporting Information File 1. Comparison of mass spectra and retention indices unequivocally established the identity of Y and 10b (Table 3).

Both compounds 4b and 10b that were identified in this study as volatiles emitted by Geniculosporium have not been reported as natural products before. However, the structurally related compounds 4f and 10k are known from the fungus Bjerkandera adusta [24]. It is interesting to note that in both cases the dichlorodimethoxybenzene (10b or 10k) can arise by a second chlorination from the monochlorodimethoxybenzene (4b or 4f, respectively), suggesting that in both organisms the sets of chlorinated compounds arise via one and the same biosynthetic pathway. Known structurally related compounds from fungi are drosophilin A (19) [25] or the trichlorinated phenols 20–22 (Figure 5) [26]. The biological function of 4b and 10b in Geniculosporium is unknown, but the antibiotic activity of the related compound drosophilin A towards bacteria is well known [27].

A iodinated volatile from Streptomyces chartreusis

During the course of our work on volatiles from various bacteria and fungi we rarely encountered chlorinated volatiles. Brominated and iodinated volatiles are even more rare. Investigations on the volatiles released by the actinomycete Streptomyces chartreusis during growth on 84 GYM medium, also collected by use of a CLSA followed by GC–MS analysis of the obtained headspace extracts, led to a surprising result. The extracts contained a trace compound that was readily identified from its mass spectrum and comparison to an authentic standard as methyl 2-iodobenzoate (23, Figure 6A). This compound was observed as the principal compound in headspace extracts during growth of S. chartreusis on 84 GYM supplemented with 2-iodobenzoic acid suggesting that 23 arises by efficient methylation of the carboxylic acid (Figure 6B). 2-Iodobenzoic acid is frequently used in many chemical laboratories including ours, e.g., as a starting material for the preparation of the oxidising agents IBX and DMP. A contamination of a bacterial agar plate with traces of 2-iodobenzoic acid was assumed as a possible, albeit unlikely explanation for the formation of 23 in the bacterial cultures. In our laboratories all analytical work is strictly spatially separated from the other chemical (synthetic) work. Furthermore, a contamination with 2-iodobenzoic acid as the reason for the emission of 23 by S. chartreusis was excluded by the sixfold repetition of the headspace analyses during a time period of almost two years (January 2012–August 2013), using new batches of medium in all cases. Compound 23 was repeatedly detected in all six analyses which clearly supports the natural origin of this volatile.

The iodinated compound 23 has never been reported as a natural product. One of the few reported iodinated compounds is the structurally highly complex calicheamicin 24 (Figure 7) from Micromonospora echinospora [28] that also contains an iodinated aromatic subunit.

In summary, we have presented the identification of 4-chloro-1,2-dimethoxybenzene (4b) and 1,5-dichloro-2,3-dimethoxybenzene (10b) as volatile natural products released by the fungus Geniculosporium. Furthermore, Streptomyces chartreusis was shown to emit methyl 2-iodobenzoate (23). All three compounds are new natural products. Future work on the biological function of these metabolites and the biosynthetic pathways is now possible.

Headspace analyses: The volatiles released by Geniculosporium or Streptomyces chartreusis were trapped by use of the CLSA (closed-loop stripping analysis) technique as described previously [30]. GC–MS analyses of the obtained headspace extracts were carried out on an Agilent 7890A connected with an Agilent 5975C inert mass detector fitted with a HP5-MS fused silica capillary column (30 m, 0.25 mm i. d., 0.25 μm film, Agilent). GC conditions were as follows: inlet pressure 77.1 kPa, He 23.3 mL min−1, injection volume 1.5 μL, transfer line 300 °C, electron energy 70 eV. The operation mode was splitless (60 s valve time) and the carrier gas was He at 1.2 mL min−1. The GC was programmed as follows: 5 min at 50 °C increasing with 5 °C min−1 to 320 °C. Retention indices (I) were determined from a homologous series of n-alkanes (C8–C38). The mass spectra of the natural compounds X and Y are shown in Figure 2. For comparison the mass spectra of all commercially available and synthetic chlorodimethoxybenzenes 4a–4f and dichlorodimethoxybenzenes 10a–10k are shown in Figures S1 and S2 of Supporting Information File 1. Retention indices of natural X and Y and of all chlorodimethoxybenzenes 4a–4f and dichlorodimethoxybenzenes 10a–10k are listed in Table 1 and Table 2.

This work was funded by the Deutsche Forschungsgemeinschaft with an Emmy Noether fellowship (DI1536/1-3) and a Heisenberg fellowship (DI1536/4-1) (to JSD), by the State of Lower Saxony with a Ph. D scholarship (to TW), and by the Beilstein Institut zur Förderung der chemischen Wissenschaften with a Ph. D scholarship (to PR). We thank Stefan Schulz (Braunschweig) for his support. 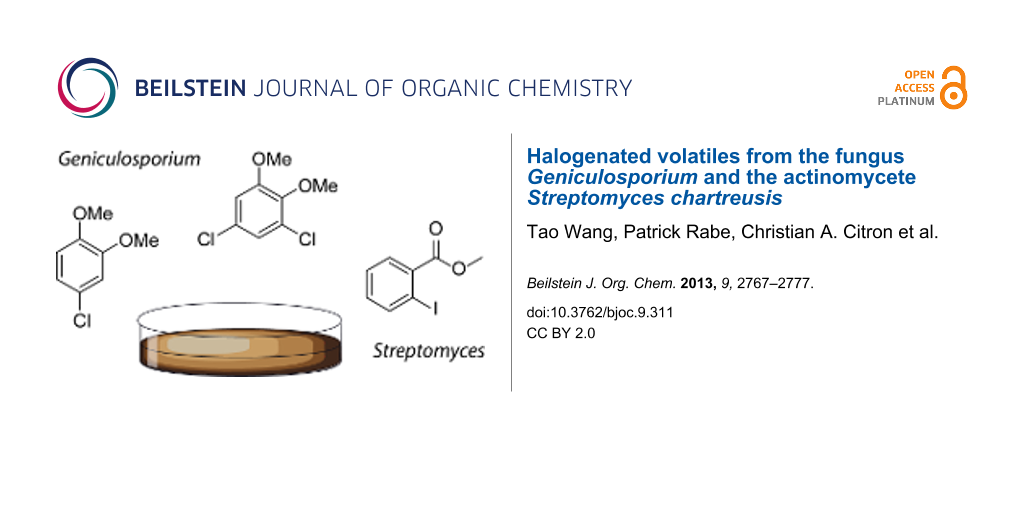