All articles from this author
Tereza Pastýříková

Meta- or para-nitro-(pentafluorosulfonyl)benzenes underwent the Davis reaction with arylacetonitriles to provide the SF5-containing benzisoxazoles. Good yields were obtained with arylacetonitriles containing the electron-neutral or electron-donor group, while those with the electron-acceptor group were found to be unreactive. Reductions of the benzisoxazoles gave ortho-aminobenzophenones in high yields. Their synthetic utility was demonstrated by condensation reactions with carbonyl compounds or amines to provide SF5-containing quinolines and quinazolines, respectively.

Reactions of nitroarenes with nucleophiles have been the focus of many investigations and represent processes that provide a range of useful products. These reactions can proceed in several ways: (a) ipso substitution of the nitro group of nitroarenes; (b) substitution of a halogen in halogen-substituted nitroarenes; and (c) substitution of hydrogen in ortho- or para-positions to the nitro group through vicarious or oxidative nucleophilic substitutions. Mechanistic studies have revealed that in all of these reaction pathways, the primary process is the reversible addition of nucleophiles to the ring carbon atoms bearing hydrogen and the formation of anionic σH adducts [1-6]. One example of such a reaction is the formation of benzisoxazoles (anthraniles) from substituted nitrobenzenes and arylacetonitriles in the presence of hydroxide in alcoholic solvent. This reaction was first reported by Davis and Pizzini [7] and probably proceeds through the formation of σH adducts that give nitroso compounds, which upon deprotonation enter an intramolecular addition–elimination process as shown in Scheme 1. Typical reaction conditions are an excess of alkali metal hydroxide in a low-boiling-point alcohol at ambient temperature [8-10].

When the reaction was performed in pyridine, products 1 (Figure 1) of the nucleophilic substitution of halogen were formed. Reactions of para-nitroanisole with arylacetonitriles (KOH/MeOH) failed to provide the benzisoxazoles [7], and also dinitrobenzenes were found to be problematic [9]. The reactions of nitrobenzene with arylacetonitriles gave oximes 2 (Figure 1) [11].

Pentafluorosulfanyl-containing compounds (first synthesized by Sheppard in 1960 [12,13]) are relatively rare, and their chemistry is underdeveloped. These derivatives are promising for various applications due to an unusual combination of the properties of the SF5 group, such as high lipophilicity, with strong electron-acceptor character. One important property of the SF5 group is its high thermal and chemical stability [14-17]. The main reason that prevents further development of SF5 organics is their limited availability. In SF5-aromatics, para- and meta-nitro-(pentafluorosulfanyl)benzenes (3 and 4) (Figure 1) are available by the direct fluorination of the corresponding bis(nitrophenyl)disulfides [18-20], and several other SF5-benzenes are available through Umemoto’s two-step procedure starting from diaryldisulfides or mercaptoaromatics [21]. We have recently reported SNAr reactions of the nitro group in compounds 3 and 4 with alkoxides and thiolates [22], vicarious nucleophilic substitution (VNS) of the hydrogen with carbon [23,24], oxygen [25] and nitrogen [26] nucleophiles, and oxidative nucleophilic substitution of hydrogen (ONSH) with Grignard and organolithium reagents [27]. This chemistry significantly expanded the range of available SF5-benzene derivatives. The synthetic chemistry and biological activity of pentafluorosulfanyl organic molecules has been recently reviewed [28].

In this paper, we report our results on benzisoxazole formation from nitrobenzenes 3 and 4 and further transformations to SF5-containing aminobenzophenones, quinolines and quinazolines. Of these compound types, only some SF5-substituted quinolines are known. Wipf and co-workers have recently reported the synthesis of some SF5-substituted quinolines as intermediates towards analogues of the antimalarial agent mefloquine and found that some analogues had improved activity and selectivity against malaria parasites (Scheme 2) [29,30].

We started the investigations by the reaction of para-nitro-(pentafluorosulfanyl)benzene (3) with phenylacetonitrile (6a) using excess sodium hydroxide in ethanol. The presence of the strongly electron-withdrawing SF5 group on nitrobenzene 3 should be beneficial for the Davis reaction since nitrobenzenes with electron-donor groups were found to be unreactive [7]. Addition of 1.5 equiv of 6a and 3 to a solution of 10 equiv NaOH in ethanol produced a deep red–brown reaction mixture with the formation of a brown precipitate after a few minutes of stirring. After a further 15–30 minutes the precipitate dissolved, and after one hour the product 7a was isolated in 66% yield (Table 1, entry 1). The benzisoxazole structure of 7a was confirmed by spectroscopic methods. The reaction also worked in similar yields by using KOH in methanol, and no improvements were observed when the reaction time, temperature and amount of base and 6 were varied. Next, an investigation of the scope of the reaction was carried out. The presence of electron-donor groups on the benzene ring of 6 gave good yields of benzisoxazoles 7; however, the reaction with (4-chlorophenyl)acetonitrile (6b) provided only traces of 7b (no improvement of the yield was observed by increasing the amount of 6b or using a longer reaction time).

Reactions with the meta-nitro-(pentafluorosulfanyl)benzene (4) proceeded well with electron-neutral- or electron-donor-substituted phenylacetonitriles. With electron-acceptor-substituted phenylacetonitriles, the reactions failed. On the other hand, the reaction with 1-nitro-3-trifluoromethylbenzene (5) provided the benzisoxazole product in good yield. This observation is surprising given the fact that the CF3 and SF5 groups have similar group electronegativities [14], and the steric difference should not play a role here. These results indicate that the reaction scope shows limitations and the electronic properties of the starting substrates have to be finely tuned for efficient reaction.

The benzisoxazoles 7 and 8 were reduced to ortho-aminobenzophenones 10 and 11 in excellent yields by using iron powder in aqueous acetic acid according to the literature procedure (Table 2) [31].

Aminoketones 10 and 11 were investigated as starting substrates in the synthesis of various nitrogen heterocycles by condensation reactions. Several reliable synthetic methods giving quinolones [32,33] or quinazolines [34,35] have been reported in the literature. One potential problem of this approach is the reduced nitrogen nucleophilicity by the strongly electron-withdrawing SF5 group, especially for compounds 10 where the SF5 group is in conjugation with the amino group. The reduced reactivity was indeed observed compared to unsubstituted ortho-aminoacetophenone, but it could be overcome by using an excess of the condensation reagent and longer reaction times. Quinoline 12 was prepared in high yield by the Friedländer annulation reaction of 10a with excess ethyl acetoacetate in the presence of catalytic CAN using modified literature conditions (Scheme 3) [32].

Finally, quinazoline 14 was synthesized by the reaction of aminoketone 11a with benzylamine in the presence of t-BuOOH and catalytic iodine according to the literature conditions (Scheme 5) [34]. However, the analogous reaction with ketone 11e was found to be too slow (36% conversion after 26 h as judged by GCMS analysis) to be synthetically useful. This reduced reactivity of 11e compared to 11a is due to the relatively low electrophilicity of the carbonyl group of 11e.

In summary, reactions of meta- or para-nitro-(pentafluorosulfonyl)benzenes with arylacetonitriles in the presence of NaOH in ethanol gave the SF5-containing benzisoxazoles in good to high yields. These reactions are limited to arylacetonitriles containing electron-neutral or electron-donor groups. Reductions of the benzisoxazoles with iron powder in acetic acid provided high yields of SF5-containing ortho-aminobenzophenones, which underwent condensation reactions to quinolines or quinazolines. This methodology provides straightforward access to new SF5-substituted aromatic and nitrogen-containing heteroaromatic compounds.

Nitration of 5,11-dihydroindolo[3,2-b]carbazoles and synthetic applications of their nitro-substituted derivatives

© 2013 Beier and Pastýříková; licensee Beilstein-Institut.
This is an Open Access article under the terms of the Creative Commons Attribution License (http://creativecommons.org/licenses/by/2.0), which permits unrestricted use, distribution, and reproduction in any medium, provided the original work is properly cited.
The license is subject to the Beilstein Journal of Organic Chemistry terms and conditions: (http://www.beilstein-journals.org/bjoc) 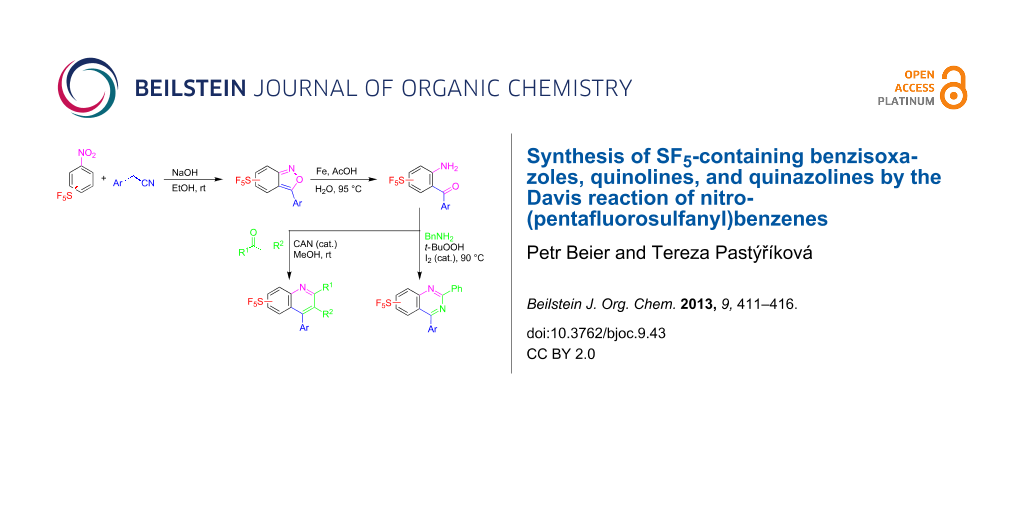