All articles from this author
Louis P. Sandjo


All articles from this author
Isaiah O. Ndiege


All articles from this author
Ahmed Hassanali


All articles from this author
Wilber Lwande

The bioassay-guided purification of Zanthoxylum paracanthum (Rutaceae) extracts led to the isolation of three new alkaloids, namely 1-hydroxy-10-methoxy-7H-dibenzo[de,g]quinolin-7-one (zanthoxoaporphine A, 2), 1-hydroxy-7H-dibenzo[de,g]quinolin-7-one (zanthoxoaporphine B, 3) and 1,8-dihydroxy-9-methoxy-7H-dibenzo[de,g]quinolin-7-one (zanthoxaporphine C, 4), and a known lignan identified as sesamin (1). Isolation and purification of the constituent compounds was achieved through conventional chromatographic methods. The chemical structures of the isolated compounds were determined on the basis of UV, IR, NMR and MS data, and confirmed by comparison with those reported in the literature. The larvicidal activity of some of the isolated compounds was investigated by using third-instar Anopheles gambiae larvae.

Zanthoxylum paracanthum is a tree belonging to the Rutaceae family. The mature tree is at least 10 m tall. It has branches with straight or upturned spines that are 3–11 mm long and has leaves with 11–23 leaflets. It is found mainly in moist or dried forests or in closed thickets near the sea [1]. Many communities in east Africa use several plant species of this family in traditional pharmacopoeia. The bark of Z. amaniensis is chewed to relieve tooth ache. The leaf decoction of Z. chalybea is administered to children suffering from kwashiorkor and as a beverage for the treatment of oedema [2]. Although, Z. paracanthum is not known to be used by Kenyan traditional healers, previous studies reported species from the same genus as rich in alkaloids [3-5], which constitute the most abundant class of compounds in this genus, while coumarins [6], lignans [3] and triterpenoids, especially limonoids [7], are the minor constituents. Different classes of alkaloids have been found and reported from Zanthoxylum species, namely isoquinolines represented by benzophenanthridines [8], oxoaporphines [9], aporphines [10] and benzylisoquinoline [11]; and quinolines represented by quinolones [12] and furoquinolines [10]. Others include carbazoles [13], pyrido-indoles [12] and quinazolines [14]. Arylethanamides and amines have also been previously reported from this genus [15,16]. Thus, the reports of the presence of N-containing secondary metabolites prompted us to investigate the larvicidal effect of extracts and isolated compounds as an alternative for malaria vector control, since synthetic organic insecticides are often harmful to nontarget organisms, including human beings, and have negative environmental impacts. We herein report the bioassay-guided isolation of four compounds including three new ones and the larvicidal activity of two of them.

Extract B was therefore subjected to repeated column chromatography affording 60 fractions, which were pooled into 18 subfractions (B1–B18) based on comparative TLC. B1, B3, B5, B6, B9–B12, B15 and B16 yielded substantial amounts to be tested against third-instar Anopheles gambiae larvae. Consequently, subfractions B1, B3, B5 and B16 did not exhibit any larvicidal activity at 10 μg/mL after 72 hours. However, subfraction B9–B12 and B15 displayed 30, 50, 20, 34 and 10% mortality, respectively, at 10 ppm after 72 hours. B6 showed 84% mortality after 72 hours at the same concentration.

Due to the substantial amount of compounds 1 and 2, their effect against third-instar Anopheles gambiae larvae was evaluated (Table 3). Compound 2 exhibited moderate larvicidal activity after 24 hours with a LC50 at 14.4 μg/mL, while the LC50 of 1 showed mild activity (LC50 68.8 μg/mL). The activity of sesamin (1) improved significantly after 72 hours to moderate levels (LC50 at 10.3 μg/mL), while zanthoxoaporphine A (2) did not exhibit a significant change in its larvicidal activity after 3 days. Oxoaporphines and aporphines have been reported to have larvicidal activity against A. aegypti larvae. For example, liriodenine and (+)-dicentrine have been reported as larvicidal secondary metabolites with LD50 at 3.6 and 30.2 ppm after 24 hours [20,21]. Although the larvae belong to a different genus, they are from the same family, and the mode of action of these alkaloids could be the same. Zanthoxoaporphine A (2) and liriodenine, which are oxoaporphines, are more active than dicentrine (aporphine). The isoquinoline moiety could be the pharmacophore of this class of compounds and the presence of a ketone at C-7, C-4 or C-5 [22] seems to contribute to the activity. Sesamin, which showed moderated larvicidal activity, has also been reported to have antifeeding and growth-inhibition activities [23].

Zanthoxylum is a rich source of alkaloids with diverse biological activities. For example, oxoaporphine and aporphine analogues have shown antimalarial, antitrypanosomal [24], cytotoxic [25], antioxidant [26] and larvicidal activities [20,21]. Despite the reported bioactivities, some of the oxoaporphines and aporphines have undesirable effects, for instance liriodenine is mutagenic [27] and induces DNA damage, while corydine and atherospermidine also induce DNA damage [25]. Zanthoxylum is a potential source of lead compounds that can inspire the synthesis of bioactive principles based on an isoquinoline scaffold.

Melting points were determined on a Sanyo Gallenkamp electronic apparatus and are uncorrected. 1D and 2D NMR spectra were carried out on a Bruker DRX-300 MHz and Bruker 600 MHz instrument, respectively. Silica gels 60H (particle size < 45 µm), GF254 and 60A (size 70–200 µm) were used to perform, respectively, flash chromatography, thin-layer chromatography, and column chromatography. Iodine–silica gel was employed as a developer to visualize the spots on the TLC plates. HRMS–EI were recorded with a JEOL JMS HX-110 mass spectrometer instrument, and EI analysis was performed by using the direct insertion probe (DIP) on a fission platform 11 mass spectrometer operating at 70 eV. IR and UV data were obtained from Shimadzu FT spectrophotometer and Beckman system Gold HPLC–UV with a diode array detector, respectively.

Z. paracanthum (Mildbr.) Kokwaro stem bark was collected on 29th September 2001 at Mrima Hill in the Kwale district, Kenya. The plant was identified by the Herbarium in the Department of Botany, University of Nairobi where a voucher was deposited under the specimen number 2001/579.

The air-dried stem bark of Z. paracanthum was powdered and 200 g was macerated successively with hexane (Hex), dichloromethane (DCM), ethyl acetate (EA), and methanol. The extraction process lasted 3 days with each solvent (1 L). The organic part was concentrated in vacuo to give hexane extract (A) (2 g), DCM extract (B) (6 g), EA extract (C) (3 g), and methanol extract (D) (4 g). Due to its strong larvicidal activity, extract B was purified on silica gel by using column chromatography eluting with hexane/ethyl acetate in gradient conditions to afford 60 fractions. These were pooled into 18 subfractions (B1–B18) on the basis of TLC. Compound 1 (145.0 mg) was obtained from subfraction B6 (eluted with Hex/EA 9:1), while compound 2 (52.4 mg) was isolated from B11 and B12 (eluted with Hex/EA 13:7). Similarly, compound 3 (2.0 mg) was obtained from B9 and B10 (eluted with Hex/EA 7:3), while B14 eluted with Hex/EA 1:1 yielded compound 4 (3.0 mg).

For a preliminary test, stock solutions were prepared by dissolving 10 mg of each extract in 1 mL of acetone or absolute ethanol for the methanol fraction and then adding 99 mL of distilled water to make 100 mL (100 μg/mL). Each of the prepared solutions was divided into five portions of 20 mL in 30 mL vials. Five third-instar Anopheles gambiae larvae were introduced into each vial and fed with fish food. Mortality was recorded after 14, 48 and 72 hours. Control experiments were done by adding 1 mL of acetone into a 150 mL flask and then adding 99 mL of distilled water and applying the same procedure as mentioned above.

Extracts and isolated compound showing high larvicidal activity were tested at 10, 5, 2, and 1 ppm. This was performed by dissolving 5, 2.5, 1 and 0.5 mg of these organic materials in 1 mL of acetone and adding 499 mL of distilled water in a 500 mL beaker. Each of the prepared solutions was divided into five portions of 100 mL each in 250 mL beakers. Then, ten third-instar A. gambiae larvae were introduced into each beaker and fed with fish food. The mortality was recorded after 24, 48, and 72 hours. A regression equation obtained was used to determine the lethal concentration for 24, 48 and 72 hours.

© 2013 Samita et al; licensee Beilstein-Institut.
This is an Open Access article under the terms of the Creative Commons Attribution License (http://creativecommons.org/licenses/by/2.0), which permits unrestricted use, distribution, and reproduction in any medium, provided the original work is properly cited.
The license is subject to the Beilstein Journal of Organic Chemistry terms and conditions: (http://www.beilstein-journals.org/bjoc) 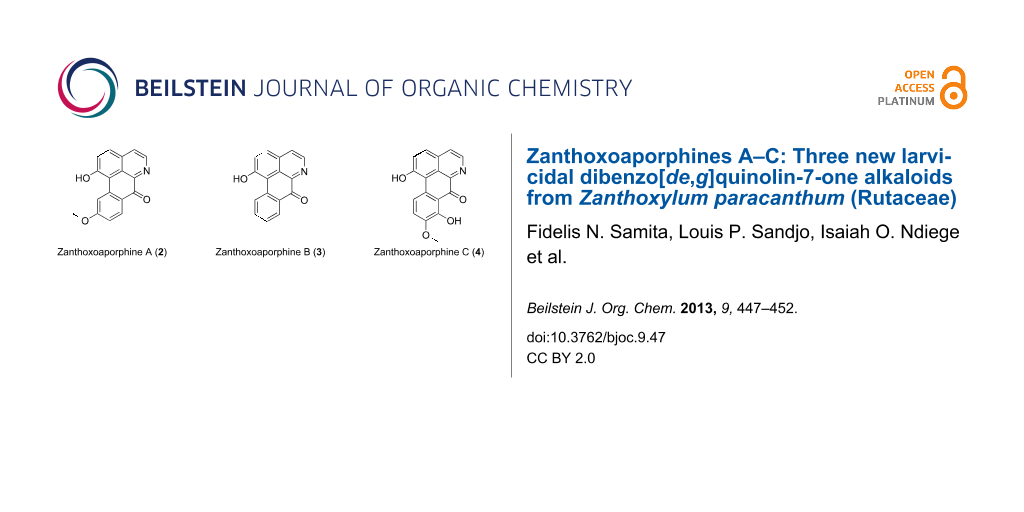