All articles from this author
Mahendra Nath

Porphyrin macrocycles are of crucial interest for their potential applications in diverse fields such as biomimetic models for photosynthesis [1,2], electronic materials [3], catalysis [4] and medicine [5,6]. In the past few decades, the synthesis of porphyrin derivatives has emerged as one of the major areas of research due to the success of these molecules for the eradication of malignant cells by photodynamic therapy (PDT) after their selective accumulation [7-10] in neoplastic tissues. In addition, the low dark-toxicity profile, easy removal from the tissue, and efficiency in generating reactive oxygen species by the absorption of photons in the visible or near IR region make them ideal candidates for developing effective photodynamic agents. These findings have encouraged researchers to design and synthesize potential targeting anticancer drugs derived from porphyrins [11,12]. Previously, a large number of these molecules have been synthesized by the coupling of diverse pharmaceutically important moieties, such as carbohydrates [13-15], amino acid residues [16-19], steroids [20,21], glycosides [22-24], nitroxyl derivatives [25], pyrrolidinone [26], pyrrolidine [27] and piperazine [28], to the porphyrin periphery. In addition, many porphyrin dimers and trimers have displayed significant biological efficacy [29] and some of these are used as photosensitizers in PDT applications for the treatment of various types of cancers [30].

Thorough literature search revealed that heterocycles containing a dihydro-1,3-oxazine ring system exhibit a wide spectrum of pharmacological activities, for example, acting as antimicrobial [31-33], anti-HIV [34], antimalarial [35] or antitumor agents [36,37]. By considering the anticancer significance of these two classes of molecules, it was contemplated to construct new dihydro-1,3-oxazinoporphyrins combining the porphyrin and dihydro-1,3-oxazine moieties in a single molecular framework. Such hybrid compounds may prove useful for pharmacological studies or in the development of new phototherapeutic agents. Therefore, in continuation of our efforts towards the synthesis of diverse porphyrin analogues [38-41] through peripheral functionalization of easily accessible meso-tetraarylporphyrins, we now report herein the first synthesis and spectroscopic characterization of a novel series of dihydro-1,3-oxazinoporphyrins.

The targeted dihydro-1,3-benzoxazinoporphyrins 6–9 were prepared in a three step procedure, starting from 5-(4-aminophenyl)-10,15,20-triphenylporphyrin (1), which was obtained by the reduction of 5-(4-nitrophenyl)-10,15,20-triphenylporphyrin using SnCl2 under acidic conditions [41,42]. Firstly, meso-(4-aminophenyl)porphyrin 1 was reacted with salicylaldehyde or 5-chlorosalicylaldehyde in the presence of La(OTf)3 as a Lewis acid catalyst in toluene under reflux to afford the corresponding iminoporphyrins 2 and 3, which on reduction by NaBH4 in a chloroform/methanol mixture at 25 °C produced meso-substituted aminoporphyrins 4 and 5, respectively. In the final step, these aminoporphyrins underwent a condensation cyclization reaction with aldehydes in THF under reflux to form new dihydro-1,3-benzoxazinoporphyrins 6–9 in good yields. Further, these free-base porphyrins were successfully converted to their zinc(II) analogues 10–13 by using Zn(OAc)2·2H2O as outlined in Scheme 1.

In addition, the dimeric naphthoxazinoporphyrins 18–20 were also prepared in moderate yields through one-pot Mannich-type condensation–cyclization reaction of 5-(4-aminophenyl)-10,15,20-triphenylporphyrin (1) with α,α- or β,β- or α,β-dihydroxynaphthalenes and formaldehyde in THF under reflux (Scheme 3). Attempts have also been made to prepare the corresponding zinc naphthoxazinoporphyrin dyads, but always impure products were obtained even after repeated column chromatography.

The newly synthesized porphyrins were characterized on the basis of 1H NMR, IR, mass and UV–vis data. The 1H NMR spectra of all the free-base porphyrins showed a singlet around δ −2.7 ppm corresponding to the internal NH protons. Iminoporphyrins 2 and 3 showed the OH and N=CH protons as singlets around 13.4 and 8.9 ppm, respectively. For the aminoporphyrins 4 and 5, the hydroxy group and NH protons appeared as broad singlets at 8.4 ppm and 4.3 ppm, respectively. The protons of the CH2 group appeared as a singlet at 4.6 ppm. The two characteristic peaks for the dihydro-1,3-oxazinoporphyrins 6, 7, 10, 11 and 14–20 corresponding to N–CH2–Ar and N–CH2–O groups appeared as two singlets between 4 and 6 ppm. In contrast, the proton NMR spectra of dihydro-1,3-oxazinoporphyrins 8, 9, 12 and 13 showed two doublets between 4 and 5 ppm corresponding to one proton each with a coupling constant of 16.5 Hz due to the coupling between two geminal protons of the N–CH2–Ar group, and a characteristic singlet around 6–7 ppm for the N–CH–O proton of the oxazine ring. The IR spectra of the porphyrins 2–5 showed a peak around 3400 cm−1 corresponding to the hydroxy group. Further, the disappearance of the hydroxy peak in the IR spectra of porphyrins 6–13 confirmed the formation of the oxazine ring. Further, the electronic absorption and emission data of all the synthesized porphyrins are presented in Table 1.

aAbsorption and emission data were measured for CHCl3 solutions of porphyrins at 298 K. bExcitation wavelength for the emission data is 420 nm.

In summary, we have developed a convenient synthetic protocol for the construction of a new series of dihydro-1,3-oxazinoporphyrins in moderate to good yields. These novel porphyrin-dihydro-1,3-oxazine hybrids may be considered as potential candidates not only for biological evaluations but also for the development of newer π-conjugated molecules for various material applications.

We thank the University of Delhi, India for providing financial support. Satyasheel is grateful to the Council of Scientific and Industrial Research, New Delhi, India for a Senior Research Fellowship.

© 2013 Sharma and Nath; licensee Beilstein-Institut.
This is an Open Access article under the terms of the Creative Commons Attribution License (http://creativecommons.org/licenses/by/2.0), which permits unrestricted use, distribution, and reproduction in any medium, provided the original work is properly cited.
The license is subject to the Beilstein Journal of Organic Chemistry terms and conditions: (http://www.beilstein-journals.org/bjoc) 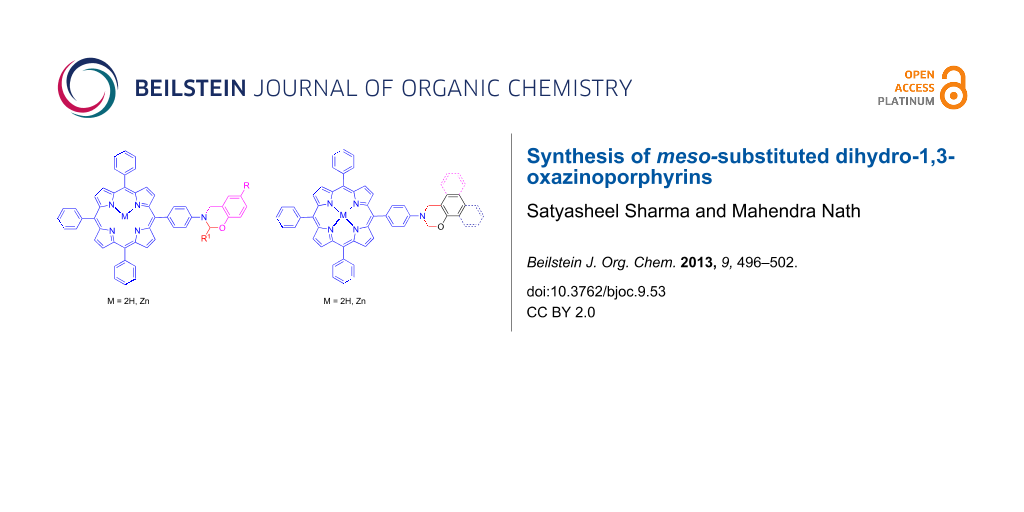