All articles from this author
Xiangcheng Pan


All articles from this author
Tsuyoshi Taniguchi

Acetic acid promotes the reduction of aldehydes and ketones by the readily available N-heterocyclic carbene borane, 1,3-dimethylimidazol-2-ylidene borane. Aldehydes are reduced over 1–24 h at room temperature with 1 equiv of acetic acid and 0.5 equiv of the NHC-borane. Ketone reductions are slower but can be accelerated by using 5 equiv of acetic acid. Aldehydes can be selectively reduced in the presence of ketones. On a small scale, products are isolated by evaporation of the reaction mixture and direct chromatography.

Reduction of carbonyl compounds is a common, fundamental chemical transformation. Among the numerous hydride reagents available for such reductions, boron reductants are widely used in the field of synthetic chemistry due to their availability and favorable reaction profiles [1-3]. For instance, sodium borohydride (NaBH4) is an inexpensive salt that is one of the most popular hydride sources for the reduction of aldehydes and ketones [4]. Reactions with NaBH4 are usually performed in a protic solvent such as methanol, and quenching and aqueous workup are essential steps along the way to isolation of the product. Although many borohydride reagents are relatively stable solids, their contact with moisture can cause decomposition with the release of hydrogen gas. Therefore, appropriate precautions are required for larger scale reactions as well as during transport and storage [5].

N-Heterocyclic carbene boranes (NHC-boranes) have emerged in recent years as a useful class of synthetic reagents, which have interesting chemistry in their own right [6,7]. Most NHC complexes of borane (NHC-BH3) are white solids that are convenient to handle because they are stable to air, water, strong bases, and weak acids [8]. Unlike amine-boranes such as R3N-BH3 or pyridine-BH3 [9-11], carbene-boranes (NHC-BH3) do not decomplex easily to release reactive borane (BH3) to solution under typical thermal reaction conditions. Perhaps because of their stability, the potential use of carbene-boranes as hydride sources has been largely overlooked. Lindsay and McArthur reported that strong Lewis acids such as BF3 and Sc(OTf)3 activate ketones towards reduction by achiral and chiral carbene boranes [12], and we showed that some high-temperature reductions of halides were probably occurring by ionic rather than radical pathways [13].

Recently, we discovered in collaboration with Mayr that NHC-boranes are good hydride sources by measurement of the nucleophilicity parameter, N [14]. By this measure, NHC-boranes are among the best neutral hydride donors known, more reactive than distant relatives such as silanes, stannanes, and dihydropyridines, and more reactive even than their amine-borane cousins [15-19]. Despite being neutral, 1,3-dimethylimidazol-2-ylidene borane (diMe-Imd-BH3, 1, see Scheme 1) has an N value (N = 12) that is roughly comparable to the anion cyanoborohydride (NaBH3CN) in DMSO. Unlike NaBH3CN, diMe-Imd-BH3 (1) is freely soluble in many organic solvents, including most aprotic solvents. Unaided reductions of aldehydes and ketones by 1 are not practical (little or no reaction occurs, depending on the substrate). However, addition of silica gel causes reductions to occur at ambient temperatures (Scheme 1) [20]. In a preferred small-scale procedure, 0.5 mmol of an aldehyde or ketone can be reduced by 0.25 mmol of 1 and 500 mg of added silica gel over periods ranging from 1–24 h.

DiMe-Imd-BH3 (1) does not react with silica gel, so it seems likely that silica gel serves as a weak acid to activate carbonyl groups toward reduction by 1. Based on this analysis, we decided to replace the silica gel with weak acids in order to extend the practicality of reductions with NHC-boranes. We specifically targeted acetic acid because it is a weak acid that is cheap, soluble and volatile. A pilot reduction of 3-phenylpropanal 2 (0.5 mmol), 1 (0.5 equiv), and acetic acid (1.0 equiv) in ethyl acetate (EtOAc) was complete in 30 min and gave 3-phenylpropanol (3) in 86% yield after evaporation and flash chromatography (Scheme 2). Other acids including pyridinium p-toluenesulfonate, benzohydroxamic acid, and 2,2-dimethyl-1,3-dioxane-4,6-dione (Meldrum’s acid) also promoted this reduction, but offered no clear advantages over acetic acid. No reduction occurs over 24 h when 1 and 2 are stirred in EtOAc without acid under these conditions.

We next conducted a series of experiments to look at the boron products of such reactions by 11B NMR spectroscopy, and these results are summarized in Figure 1. A control experiment showed that the direct acid/base reaction of 1 with acetic acid (aldehyde omitted) was very slow at rt (entry 1). Evolution of hydrogen gas was not evident (no bubbling), and boryl acetate 4a was present in only trace amounts (<<5%) after 24 h. Evidently then, the acetic acid functions as a Brønsted acid to activate the carbonyl group towards attachment by 1. This is different from NaBH4, which reacts quickly with acetic acid to liberate H2 and form a modified reducing agent, NaBH(OAc)3 [21,22].

Even with heating, the direct acid/base reaction of 2 and acetic acid was rather slow [23]. After one day (entry 2), about 18% of 2 was converted to the known boryl acetate 4a (−14 ppm) [14]. After three days (entry 3), the major component was still the starting NHC-borane 2, but now there was 22% of 4a and 19% of a new product that exhibited a broad doublet at −3 ppm. We could not isolate this product by flash chromatography, but we tentatively assign it as boryl diacetate 4b. For comparison, the known ditriflate dipp-Imd-BH(OTf)2 resonates at −2 ppm [24].

Next we reduced hydrocinnamaldehyde 2 (1 equiv) under the standard procedure (AcOH, 1 equiv) but varying the amount of NHC-borane 1. Alcohol 3 is the reduction product, and the soluble boron products [25] were identified by 11B NMR spectroscopy of the crude product mixture. Each product spectrum gave the same four resonances, but in different ratios. With 1 equiv of 1 (entry 4), there was 55% of the starting NHC-borane 1, 24% boryl monoacetate 4a, 4% boryl diacetate 4b, and 17% of a broad resonance at about +18 ppm. This is not in the region expected for an NHC-borane, but is instead where boric acid and similar molecules resonance. Thus, it might be B(OAc)3, but it could also be boric acid itself (the solvent was not dried) or some intermediate product. We write this simply as B(OR)3. With 0.5 equiv 1 (entry 5), there was 32% of the starting 1, 39% 4a, 4% 4b and 25% B(OR)3. The final reaction with 0.33 equiv of 1 was considerably slower (entry 6). Aldehyde 2 still remained after 6 h, and the 11B NMR spectrum shows 2% starting 1, 46% 4a, 14% 4b and 38% B(OR)3. These results demonstrate that the reaction is complex on the boron side, with the second and third hydride transfers competing with the first. This makes little difference when the alcohol is the target product because all the other boron and NHC products are held back on the silica gel during flash chromatography.

To compare the acid-promoted reductions with the silica-gel-promoted reactions, we tested the scope of this reaction on many of the same aldehydes and ketones (Table 1 and Table 2). The typical procedure is convenient, and no precautions were taken to exclude moisture or air. For aldehyde reductions (Table 1), the reactants were mixed in EtOAc that was taken from the bottle without drying. The standard ratio of aldehyde to 1 was 1:0.5, so two of the three hydride equivalents of 1 are consumed. After completion of the reaction, the solvent was removed on a rotary evaporator, and the residue was directly purified by silica gel chromatography.

To be consistent with the prior silica gel reductions, ketones (Table 2) were reduced in dichloromethane, and the molar ratio of ketone to 1 was 1/1. Under the standard conditions for reduction of aldehydes (25 °C, 1 equiv acetic acid), the reaction of 1-(4-bromophenyl)ethanone (19) was very slow. Heating of 19 (1 equiv), 1 (1 equiv) and acetic acid (1 equiv) at 40 °C for 24 h gave a moderate yield (68%) of secondary alcohol 26, but unreacted ketone remained. This problem was solved by increasing the amount of acetic acid to 5 equiv. Now ketone 19 was consumed in 24 h and alcohol 26 was isolated in 93% yield (Table 2, entry 1). The excess of acetic acid was removed prior to chromatography during evaporation, so the simple isolation procedure was not changed. Under these conditions, ketones 20–25 were reduced to the corresponding secondary alcohols 27–33 in good yields (Table 2). Reductions of 4-tert-butylcyclohexanone (21) and 4-phenyl-2-butanone (22) needed only 1 equiv of acetic acid (as with aldehydes), while the other substrates were reduced with 5 equiv.

Reduction of 4-tert-butylcyclohexanone (21) gave the cis-alcohol 28 in 65% yield and the trans-alcohol in 24% yield (89% combined yield). The major product results from axial attack and is seen with borohydride reagents [26,27] as well as with the combination of 1 and silica gel. Reaction of (E)-4-phenylbut-3-en-2-one (23) gave the 1,2-reduction product 31 along with a small amount of doubly reduced, saturated alcohol 30 (90:10). The combined yield of these inseparable products was 79%. Reductions of hindered ketones 24 and 25 were slower even with 5 equiv of acetic acid, but gave the corresponding alcohols 32 and 33 in 83% and 97% after 48–72 h. For comparison, the yield of the reaction of 24 using silica gel was 73% after 96 h [20]. Overall, the reductions of aldehydes and ketones with the combination of 1 and acetic acid gave comparable yields to the silica procedure.

Chemoselective reductions were also readily achieved under the present reaction conditions (Scheme 3). Treatment of a mixture of aldehyde 6 (0.5 mmol) and ketone 19 (0.5 mmol) with 1 (0.25 mmol) and acetic acid (1 equiv) in EtOAc exclusively provided the primary alcohol 13 in 95% yield, while the ketone 19 was intact (<5% conversion to 26). The reduction of 4-acetylbenzaldehyde (34) was also chemoselective and afforded only 4-acetylbenzyl alcohol (35) in 79% yield.

In summary, we have shown that acetic acid is a good activator for the reductions of aldehydes and ketones by stable NHC-borane 1. DiMe-Imd-BH3 (1), and by implication related carbene-boranes, are convenient reagents for small-scale reductions, because their ease of handling allows simple reaction and separation procedures.

The results of control experiments suggest that the acetic acid activates the carbonyl component, not the NHC-borane. Thus, the acid does not consume a hydride equivalent of NHC-BH3, and a stoichiometric amount of H2 gas (a safety hazard on a large scale) is not produced.

Further research and process-development work are needed before one can conclude that diMe-Imd-BH3 and related carbene boranes are generally attractive reagents on larger scales [5,21]. However, based on the established physical and chemical properties of 1 and its relatives and on the convenience of the small-scale reduction procedures with both silica gel and acetic acid, NHC-boranes deserve serious consideration as candidates for large-scale reductions.

11B NMR experiments in Figure 1, entries 4–6: The above procedure was followed on the same scale but with varying amounts of 1. After the solvent was removed, the residue was taken up in C6D6 prior to recording of the 11B NMR spectrum.

We thank the U.S. National Science Foundation for support of this work. TT also warmly thanks Kanazawa University, the Mochida Memorial Foundation for Medical and Pharmaceutical Research, and the Yoshida Foundation for Science and Technology for underwriting his stay at the University of Pittsburgh.

© 2013 Lamm et al; licensee Beilstein-Institut.
This is an Open Access article under the terms of the Creative Commons Attribution License (http://creativecommons.org/licenses/by/2.0), which permits unrestricted use, distribution, and reproduction in any medium, provided the original work is properly cited.
The license is subject to the Beilstein Journal of Organic Chemistry terms and conditions: (http://www.beilstein-journals.org/bjoc) 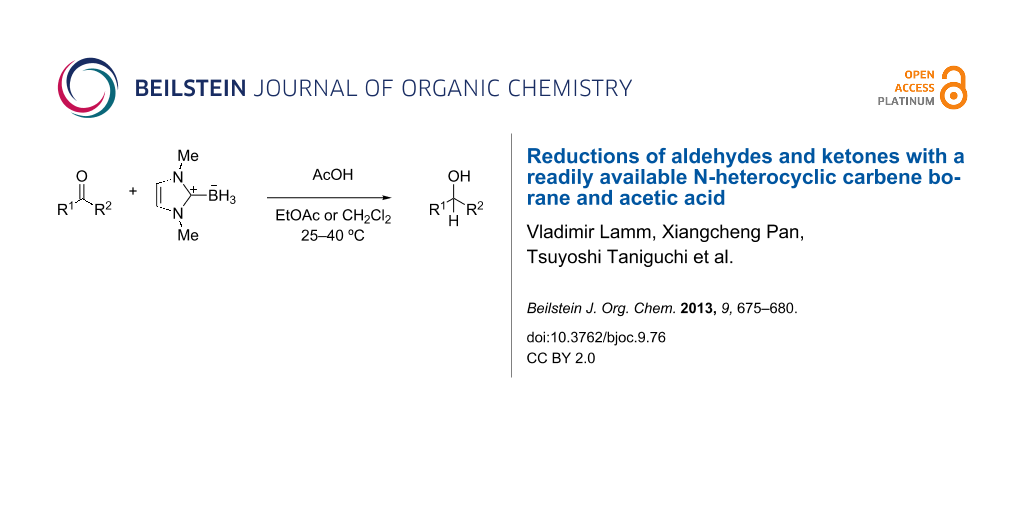