All articles from this author
Andreas Büchtemann


All articles from this author
Angela Fiore


All articles from this author
Liberato Manna


All articles from this author
James H. Nelson


All articles from this author
Diana Hill

Highly luminescent nanocomposites were prepared by incorporating CdSe/CdS core/shell nanorods into different polymer matrices. The resulting nanocomposites show high transparency of up to 93%. A photoluminescence quantum efficiency of 70% was obtained, with an optimum combination of nanorod (0.05 wt %) and at a UV-initiator concentration of 0.1 wt % for poly(lauryl methacrylate). Nanorods tend to agglomerate in cellulose triacetate.

Semiconductor nanoparticles have attracted great interest in recent years because of their fascinating optical properties. Their emission wavelength can be tuned directly by changing their size and shape as a result of quantum confinement effects. By reducing the particle size, the band-gap increases and the emitted light is blue-shifted [1,2]. In contrast to spherical quantum dots (QDs), nanorods (NRs) show anisotropic properties such as linearly polarized absorption, emission and lasing, and thus have potential applications in a new generation of light-emitting diodes (LEDs), lasers or luminescent solar concentrators [3-6]. One of the challenges of these applications is the incorporation of inorganic nanoparticles into organic polymer matrices, since this is usually accompanied by phase separation, aggregation of nanoparticles, loss of transparency and luminescence quenching due to exciton energy transfer [2,7]. Several methods have been described to overcome these problems for quantum dot polymer composites. For example, Bawendi and coworkers incorporated trioctylphosphine oxide covered CdSe/ZnS QDs in poly(lauryl methacrylate) (PLMA) [6,8], while Woelfle and Claus dispersed CdSe/ZnS QDs in an ionic liquid that was compatible with poly(methyl methacrylate) (PMMA) [6]. However, in both these cases chemical attack of QDs by initiator radicals produced from azobisisobutyronitrile (AIBN) during the thermal polymerization process leads to luminescence quenching and as a result nanocomposites with photoluminescence (PL) quantum efficiency (QE) of less than 40% were obtained [6-8].

Here we present two different methods to fabricate nanorod polymer composites: (a) UV-polymerization and (b) a radical free drop-casting process. Core/shell NRs were chosen as they exhibit higher stability against photooxidation and chemical attack by radicals [2,9]. The band-gap within a type-I core/shell nanocrystal gradually increases from the inside to the outside [2,10]. In our first method, where radicals are present, the NRs were dispersed at several concentrations in a monomer mixture of lauryl methacrylate (LMA) with the cross-linking agent ethylene glycol dimethacrylate (EGDM) and the liquid UV-initiator Darocure® 4265. LMA provides the hydrophobicity required preventing agglomeration, and by changing the amount of cross-linker either flexible (<20 wt % EGDM) or rigid nanocomposites could be fabricated. In our second method we fabricated thin polymer films using a radical free drop-casting process. Cellulose triacetate (CTA) was chosen as polymer because of its high transparency, hydrophobicity and thermal stability. It can be obtained from renewable resources such as wood or cotton. Moreover, it has already been found to be a suitable matrix for embedding CdSe/ZnS QDs [11-13]. The structure of CTA is shown in Figure 1. We used CdSe/CdS nanorods with two different sizes, longer rods with an aspect ratio of 6 and shorter bullet shaped rods with an aspect ratio of 3.

Figure 2a shows the absorption maxima corresponding to the first exciton peaks for different aspect 3 NR concentrations (0.008–0.2 wt %) in chloroform. From the linear correlation between NR concentration and absorbance, we conclude that the Beer–Lambert law holds until at least 0.2 wt %. The emission maximum is at 632 nm, yielding a Stokes shift of 13 nm. The luminescence intensity (Figure 2b) has a maximum for a nanorod (aspect ratio 3) concentration of 0.008 wt %. Absorption and emission spectra for the aspect 6 NRs are shown in Figure 3a and 3b. At high concentrations, the emission is slightly shifted towards the red. As determined by TEM (Figure 4a, 5a), the longer rods had a diameter of 5 nm and a length of 30 nm (aspect ratio 6) and the shorter bullet shaped rods were 4 nm in diameter and 12 nm in length (aspect ratio 3).

The absorption spectra of the P(LMA-co-EGDM) nanocomposites with NRs (aspect ratio 3) at different NR concentrations depicted in Figure 6a reveal strong absorption at shorter wavelengths (400–500 nm) and the first exciton peak at 619 nm. The nanorods are well dispersed in the polymer matrix, as shown by the lack of scattering in the absorption spectra at wavelengths much larger than that of the first exciton peak (Figure 6a). Figure 5c illustrates that we have fabricated highly transparent nanocomposites.

The PL spectra in Figure 6b show an increase of emission intensity as a function of NR concentration, and a small red shift of ~3 nm from 632 nm for low to 635 nm for high NR concentrations. From photoluminescence (PL) quantum efficiency (QE) measurements we find a high QE of 63% for nanocomposites containing nanorods with an aspect ratio of 3 for a concentration of 0.008 wt % (or 0.24 µM), see Table 1. For higher NR concentrations, the PL QE decreases to 37% for a concentration of 0.32 wt %. This can be readily explained by differences in the configurations of the PL and the PL QE measurements. The PL spectra were measured in reflection geometry, whereas the excitation light in the PL QE measurement system passes through the sample. In this case the emitted photons can be reabsorbed by other NRs, which causes PL quenching. Further, from Table 1 it can be inferred that the QE in solution for these NRs is somewhat lower than in the composite, suggesting a better stabilization in the polymer matrix.

The 9–15 µm thin CTA nanocomposite layers containing NRs (aspect ratio 6) on glass exhibit bright orange luminescence (see Figure 9). The absorption and emission spectra are shown in Figure 10. The QE ranges from 52% to 39% for NRs in CTA for 0.5 wt % and 2.0 wt %, respectively. Luminescence lifetime measurements revealed that dispersion of the nanorods in either PLMA or CTA did not influence the lifetime (Figure 11). Mono-exponential fits resulted in a lifetime of about 12 ns, while bi-exponential fits showed about 8 ns for the fast component and about 19 ns for the slow component.

TEM images of the CTA nanocomposite layer containing 2 wt % NRs (aspect ratio 6), as shown in Figure 12, predominantly show rod-shaped agglomerates of hundreds of single NRs with diameters of about 60–80 nm and lengths of up to 300 nm, where the long axis is referred to as main agglomerate axis. From the TEM images, we deduce a concentration between 10–30 µM. Only a few single distributed nanorods can be seen. We found that the agglomerates are aligned within the CTA layer (Figure 12a), which can be explained by arrangement along the linear polymer chains and/or alignment in the casting direction (which was from left to right in this image). This is similar to spherical silver nanoparticles aligning in pearl-necklaces in the drawing direction when cast from nanoparticle polymer solutions, as observed by Dirix et al. [14]. In most of these NR agglomerates the NRs are aligned along the main agglomerate axis (see Figure 12b), but a few agglomerates with perpendicular NR orientation can be also found (Figure 12c). The distance between the single NRs within these agglomerates is ~2 nm.

We have prepared highly transparent (>93%) luminescent (QE = 70%) nanocomposites from CdSe/CdS core/shell nanorods in PLMA plates and CTA thin layers. A high QE is observed at low nanorod concentrations (0.008 wt %) in PLMA, corresponding to a concentration of 0.24 µM. We found that a low as possible concentration of UV-initiator is required in order to obtain a high QE. In the case of CTA, we found that NRs are agglomerated.

The CdSe/CdS core/shell NRs used in this study were prepared following reported methods [13,15]. The nanoparticles were capped with different long alkyl chain ligands: the aspect ratio 3 nanorods were stabilized with a mixture of trioctylphosphineoxide (TOPO), trioctylphosphine (TOP) and hexadecylamine (HDA), whereas the aspect 6 nanorods were capped with a mixture of TOPO, hexylphosphonic acid (HPA) and octadecylphosphonic acid (ODPA). Various amounts of NRs (0.008–0.32 wt %) were dispersed in a monomer mixture of LMA (Fluka, 98%) with 20 wt % of the cross-linking agent EGDM (Fluka, ≥97%) and 0.1–0.5 wt % of the liquid UV-initiator Darocure® 4265 (Ciba) by ultrasound treatment. The reaction mixtures were transferred into glass cuvettes and polymerized under a nitrogen atmosphere by illuminating the cuvettes from two sides with UV-A radiation (360 nm) for 15 min. The cuvettes consisted of two glass plates with an elastic distance holder (1 mm or 5 mm) between the plates, which were held together by steel clamps. The polymerized plates were taken out of the cuvettes and illuminated for additional 2 h to complete curing. The refractive index of the nanocomposites at 589 nm was determined with an Abbé refractometer to be 1.490 at 23 °C. The refractive index of the polymer itself (without NRs) is only slightly smaller (1.488) than that of the nanocomposites.

Absorption spectra were measured with a Perkin Elmer Lambda 950 UV–vis spectrometer. Emission spectra were recorded with a Perkin Elmer fluorescence spectrometer LS 50 B by exciting the samples at 395 nm. The PL QE of the P(LMA-co-EGDM) and CTA nanocomposites was measured at room temperature at the excitation wavelength of 395 nm with a Hamamatsu absolute PL quantum yield measurement system C9920-02, which uses an integrating sphere. Luminescence lifetime measurements were performed in a setup containing a FLS920 flourimeter (Edinburgh Instruments, Livingston, UK). A supercontinuum whitelight source (SC400-2, Fianium Ltd., Southampton, UK) was used as an excitation light source (rep. rate 5 MHz, λex = 405 nm).

© 2010 Bomm et al; licensee Beilstein-Institut.
This is an Open Access article under the terms of the Creative Commons Attribution License (http://creativecommons.org/licenses/by/2.0), which permits unrestricted use, distribution, and reproduction in any medium, provided the original work is properly cited.
The license is subject to the Beilstein Journal of Nanotechnology terms and conditions: (http://www.beilstein-journals.org/bjnano) 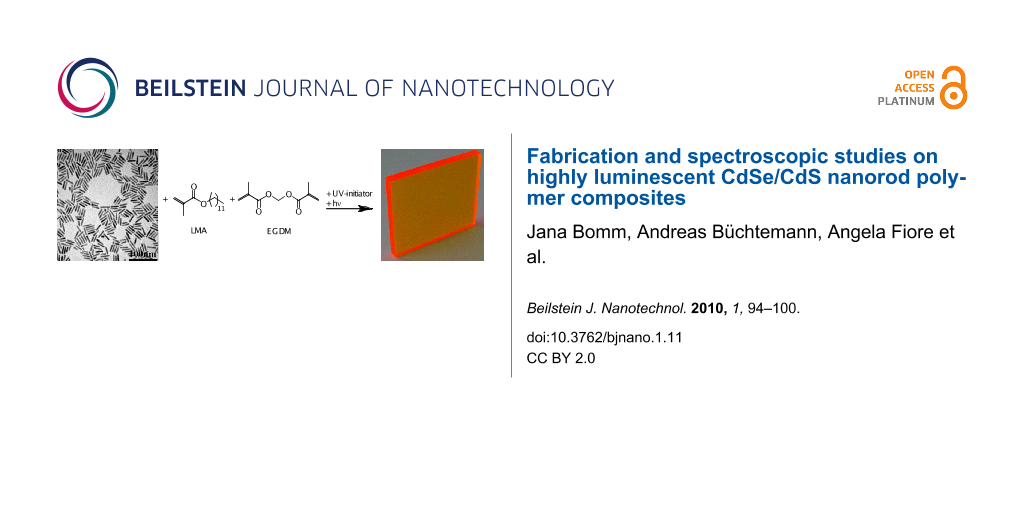