All articles from this author
Chang Zhou


All articles from this author
Baohua Zhu

This article is part of the thematic issue "Nanoarchitectonics: bottom-up creation of functional materials and systems".

An active TNT (2,4,6-trinitrotoluene) catalytic sensor based on Janus upconverting nanoparticle (UCNP)-functionalized micromotor capsules, displaying “on–off” luminescence with a low limit of detection has been developed. The Janus capsule motors were fabricated by layer-by-layer assembly of UCNP-functionalized polyelectrolyte microcapsules, followed by sputtering of a platinum layer onto one half of the capsule. By catalytic decomposition of hydrogen peroxide to oxygen bubbles, the Janus UCNP capsule motors are rapidly propelled with a speed of up to 110 μm s−1. Moreover, the Janus motors display efficient on–off luminescent detection of TNT. Owing to the unique motion of the Janus motor with bubble generation, the likelihood of collision with TNT molecules and the reaction rate between them are increased, resulting in a limit of detection as low as 2.4 ng mL−1 TNT within 1 minute. Such bubble-propelled Janus UCNP capsule motors have great potential for contaminated water analysis.

Water pollution has become a worldwide social problem. For example, the explosive TNT (2,4,6-trinitrotoluene), which is a highly toxic substance, has been widely used in military applications. The United States Environmental Protection Agency (USEPA) has classified TNT as hazardous waste, as it is possibly carcinogenic and mutagenic. Consequently, TNT-contaminated water has become one of the most serious pollution problems in war and military testing areas [1-7]. To date, various approaches including mass spectroscopy [8], ion transfer spectroscopy [9], surface plasmon resonance [10], molecularly imprinted polymers [6], and fluorescence polarization [11] have been proposed to detect TNT. However, most of these techniques have major limitations such as cumbersome pretreatment, complicated operation, long detection time and high cost. In recent years, owing to their simplicity, rare-earth-doped upconverting nanoparticles (UCNPs) have been developed for the detection of TNT [12]. Despite the advantages of UCNP-based TNT detection, it is still restricted by passive diffusion of TNT and UCNPs. Therefore, there is a significant need for the development of a fast and facile strategy to detect TNT that does not involve complicated sample pretreatment or expensive equipment.

Recently, synthetic micro/nanomotors have attracted tremendous attention because of their unique features and enormous potential applications in different fields [13-20]. Based on the concept of nanoarchitectonics [21,22], various kinds of micro/nanomotors have been fabricated, such as Janus capsule micromotors [23], tubular micromotors [24], helical nanomotors [25], nanowire motors [26], and nanorod motors [27]. Unlike inert particles that move by Brownian motion, micro/nanomotors can actively swim in solutions by converting energy from the environment (e.g., chemical fuel, light, acoustic or magnetic) into mechanical movement [28-37]. The active motion of micro/nanomotors has been proposed to improve reaction yields by overcoming the limitation of passive diffusion and enhancing the interaction between the reactants. However, self-propelled micromotors, to our knowledge, have never been explored for the detection of TNT.

Here, we report the first example of catalytic Janus capsule micromotors as luminescence quenching based sensors for active TNT detection. The Janus capsule micromotors were fabricated by depositing a thin platinum (Pt) film onto one hemisphere of the UCNP-functionalized hollow polyelectrolyte microcapsules. These as-prepared Janus micromotors can autonomously move by catalytic decomposition of hydrogen peroxide fuel into oxygen at a speed of up to 110 μm s−1 (22 body lengths per second). Meanwhile, the Janus microcapsules are able to actively adsorb and detect TNT based on the luminescence quenching of the UCNPs by TNT. The combination of efficient self-propulsion and TNT detection by these catalytic Janus micromotors demonstrates the potential for water pollutant analysis.

The Janus UCNP-functionalized hollow polyelectrolyte capsule micromotors were prepared via a template-assisted method as schematically shown in Figure 1a. Briefly, eight bilayers of poly(allylamine hydrochloride) (PAH) and poly(styrene sulfonate) (PSS) were alternately deposited onto the surface of 5 μm silica particles by layer-by-layer (LbL) assembly [38-41]. The as-prepared particles were subsequently modified with amine-functionalized UCNPs through electrostatic interactions and then were dispersed on a glass slide to form a monolayer. After sputtering of a 20 nm thin film of Pt, the Janus UCNP-functionalized capsule motors were obtained by removing the silica cores with hydrofluoric acid.

To prepare the Janus UCNP capsule motors, NaYF4:Yb3+/Er3+ UCNPs were firstly synthesized following a previously published procedure with several modifications [42]. After treatment with poly(acrylic acid) (PAA), the surface of the UCNPs were functionalized with 3-aminopropyltriethoxysilane (APTES) to introduce the amine group. The nanostructure and morphology of the synthesized UCNPs were investigated by transmission electron microscopy (TEM). The TEM images in Figure 1b show that both the as-prepared UCNPs (inset image) and the APTES-modified UCNPs have good monodispersity and a hexagonal structure. The diameter of the APTES-UCNPs increased from 65 nm to 71 nm after modification with APTES. The chemical groups on the surface of the UCNPs were illustrated by Fourier-transform infrared (FTIR) spectroscopy. Figure 1c shows the FTIR spectra of the UCNPs and APTES-UCNPs. Compared with the FTIR spectrum of unmodified UCNPs, a notable transmission band peak at 1128 cm−1 (blue circle), attributable to the Si–O stretching vibration, can be seen in the FTIR spectra of APTES-UCNPs. These results indicate that the UCNPs were successfully modified with APTES. It has been demonstrated that the amine group is important to allow UCNPs to detect TNT. To verify the functionalization of the APTES-UCNPs with amine groups, the surface charge of the UCNPs before and after modification was measured. As shown in Figure 1d, the zeta potential changed from −22.08 to 17.3 mV, indicating the successful surface amine group functionalization. Moreover, the fluorescence emission spectrum shows that the surface functionalization did not affect the photoluminescence properties of the UCNPs (Figure 1e).

We have developed a micromotor-based active sensor for the detection of TNT based on the on–off luminescence of a Janus UCNP capsule motor. The Janus UCNP capsule motors were fabricated by layer-by-layer assembly combined with vacuum deposition. These Janus motors with a catalytic Pt layer can be propelled by oxygen bubbles at a speed of up to 110 μm s−1 in 10% H2O2 fuel. Owing to their active motion capability, the as-prepared Janus motor could quickly absorb TNT molecules. More importantly, the Janus UCNP capsule motor can effectively detect TNT based on the on–off luminescence of amine-functionalized UCNPs. Benefiting from the enhanced autonomous motion, the LOD of the Janus UCNP capsule motors (2.4 ng mL−1) is 3.5 times better than that of static UCNPs within shorter analysis time. Such a micromotor could be used as a multifunctional platform integrating autonomous motion and TNT detection for efficient and rapid detection of environmental pollutants.

NaYF4:Yb/Er upconversion nanoparticles were firstly fabricated using a previously published method [42]. The obtained UCNPs (100 mg) were then mixed with PAA (300 mg) in 10 mL ethanol/chloroform (1:1) solution for 12 h at the room temperature. Then, the as-prepared PAA-UCNPs (80 mg) were added into 20 mL ethanol/acetonitrile (1:1) solution containing APTES (12.5 μL), EGDMA (25 μL), and AIBN (25 mg). After heating to 45 °C for 6 h, the amine-group-functionalized UCNPs were obtained.

To prepare Janus UCNP capsule motors, eight bilayers of PAH/PSS were deposited onto the surface of 5 μm silica particles through layer-by-layer assembly. Then, 1 mg of (PAH/PSS)8-coated particles were mixed with 10 mg of amine-group-functionalized UCNPs for 1 h under continuous shaking, and excess UCNPs were removed by centrifugation. The Janus structure was prepared by depositing a monolayer of UCNP-coated silica particles on glass substrates and sputtering 20 nm of Pt onto the surface of the UCNP-coated silica particles, followed by peeling off the particles from the substrate. The silica cores were then dissolved by treating the particles with 0.5 M HF. The Janus UCNP capsule motors were obtained after three centrifugation/water washing steps.

Analysis of the movement of the Janus UCNP capsule motors

The movement studies were accomplished by dropping Janus UNCP capsule motors into hydrogen peroxide solutions of different concentration (1–10 vol %). The self-propelled motion of Janus UCNP capsule motors was recorded by using an Olympus BX53 fluorescence microscope. The trajectories of the motor movement were tracked by using the software of Image J and the motion velocity was analyzed using Origin 8 software.

Effect of different silica coatings on the toxicity of upconversion nanoparticles on RAW 264.7 macrophage cells

© 2019 Yuan et al.; licensee Beilstein-Institut.
This is an Open Access article under the terms of the Creative Commons Attribution License (http://creativecommons.org/licenses/by/4.0). Please note that the reuse, redistribution and reproduction in particular requires that the authors and source are credited.
The license is subject to the Beilstein Journal of Nanotechnology terms and conditions: (https://www.beilstein-journals.org/bjnano) 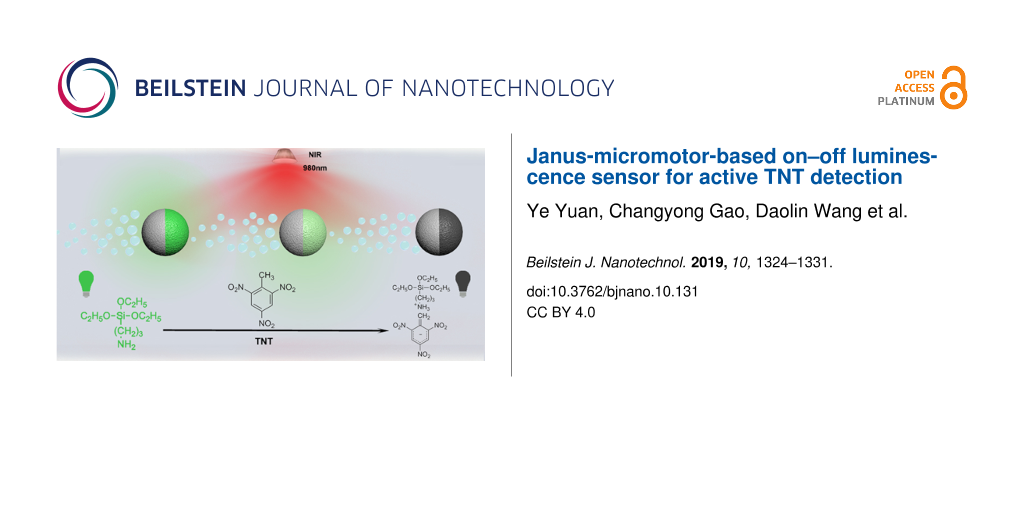