Due to their excellent properties, such as high surface-to-volume ratio and high porosity, nanomaterials have become more and more important in industrial manufacturing. As one of the most important methods for preparing nanomaterials, electrospinning (ES) [1-3] has received much attention [4-7]. However, with the advancement of nanotechnology and the increasing performance requirements of nanomaterials, the fatal shortcoming of the traditional ES process, its low yield [8,9], has also received more attention. Many studies have focused on improving the production efficiency of the ES technique. Ding et al. [10] electrospun nanofibers using a multiple-jet ES system. Krishnamoorthy et al. [11] demonstrated an ES setup consisting of 24 (8 × 3) nozzles for the large-scale production of aligned ceramic nanofibers. Kim et al. [12] developed an upward high-speed cylinder-type ES system with 120 needles in each cylinder in order to accomplish the mass production of nanofibers. In spite of the high production efficiencies reached, some problems during these ES processes still remain, such as the blocking of needles and interactions between jets.

In our previous work [21,22], a modified bubble electrospinning (MBE) method was proposed to fabricate high-quality PAN nanofibers at high yield. Moreover, we found that the addition of sodium dodecyl benzene sulfonate (SDBS) could significantly reduce the surface tension of the spinning solution facilitating the spinning process [24]. The mass production of silk fibroin nanofibers was successfully accomplished by this method [23]. A schematic of the MBE device is illustrated in Figure 1A.

The effects of the MBE, MFSE, OSFSE and SSFSE device design on the morphology and the yield of the produced nanofibers were experimentally investigated. The differences between them were explained based on simulations of the electric field distribution using the Maxwell 3D software. Our results show that all four FSE devices can be used to prepare large quantities of high-quality nanofibers, whereas the SSFSE aparatus is the optimal FSE device, providing the highest quality and the highest yield of nanofibers.

According to our previous works [21-23] and other studies [17,19], it was found that as the voltage increases, the diameter of the nanofibers becomes smaller, the distribution of the nanofibers is more uniform, and the yield of the nanofibers increases. However, an excessive voltage can lead to the instability of the electric field, and moreover, it involves safety risks that would be fatal in industry. Therefore, in this study, a low spinning voltage of 40 kV was chosen to study the spinning performance of the four self-made FSE devices, and the other spinning parameters were set as follows: the working distance from the solution reservoir to the grounded collector was 18 cm, and the collector surfaces (200 mm × 200 mm) were covered with conductive aluminum foil in order to easily remove the electrospun nanofibers for further measurements. The electrospun nanofibers were dried at room temperature and sputter-coated with a gold film for SEM analysis. All FSE experiments were carried out at room temperature (20 °C) and at a relative humidity of 60%.

The jet initiation in the OSFSE process viewed from the side by a high-speed camera is shown in Figure 4. Immediately after a voltage of 40 kV (which is above the threshold voltage) is applied to the solution surface, a deformation of the fluid is observed at the top edge of the solution reservoir. A Taylor-cone-like protrusion forms a jet after 2 s. Within 12 s, further jets rapidly develop starting at the reservoir top edge, finally covering the entire solution surface. After 15 s, the OSFSE process stabilizes.

Figure 5 shows further snapshots of the jet formation in the OSFSE process, taken as a side view by a high-speed camera. In the first 10–80 ms, the fluid at the top edge of the solution reservoir is pulled upward by the applied electric field. During the 80–110 ms interval, the fluid elongates, sharpens and forms a Taylor cone-like protrusion. Finally, at 120 ms, a jet forms.

Figure 4 and Figure 5 illustrate the working principle of the free surface electrospinning method: the surface tension of the spinning solution is overcome by the applied electric field to form jets at the solution surface that finally touch the collector being stretched into nanofibers. Figure 6 shows the forces a solution particle experiences at point A on one of the jets produced in the FSE process when an electric field is applied between the solution reservoir and the collector, neglecting airflow resistance and any environmental interference. According to Figure 6, the horizontal component the of viscous force F1 produces a centripetal force resulting in the shrinking of the radius of the whipping circle. The resulting vertical force component F2 provides the kinetic energy of the jet, impelling the stretch of the jet towards the copper mesh collector. The force components are calculated as follows:

where v is the velocity of the jet, a and b are constants to be further determined theoretically or experimentally, qA is the signed magnitude of the charge at point A that is determined by the nature of the spinning solution, and E is the electric field intensity that is calculated using the applied voltage and the working distance.

The distribution of the electric field between the solution reservoir and the collector in the four different self-made FSE devices was simulated using the Maxwell 3D software. The simulations were carried out using the following experimentally realized parameters: the copper reservoir as positive pole was a cylinder with a diameter of 40 mm and a height of 30 mm, the bulk conductivity of copper was set to 5.8 × 1011 µs/cm, the electric conductivity of the polymer nozzles in the MBE was 0 µs/cm, the electric conductivity of the PAN-DMF solution with a concentration of 10 wt % PAN and 1 wt % SDBS was 2372 µs/cm, the working distance was 180 mm and the applied voltage was 40 kV.

The morphology of the PAN nanofibers was characterized by scanning electron microscopy (SEM) (Hitachi S4800, Hitachi, Tokyo, Japan). The matrix morphology and the diameter of the fibers were characterized using the Image J software (National Institute of Mental Health, Bethesda, MD, USA) to study 100 randomly chosen nanofibers in 50 SEM images. The mass of the PAN nanofibers was measured as follows using a precise electronic balance (XJ120A, Precisa, Shanghai, China):

where W is the yield of nanofibers, W0 and W1 are the weights of the aluminum foils before and after spinning and t is the spinning time.

To further compare the spatial distribution of the electric fields of the MBE, MFSE, OSFSE and SSFSE devices, a parameter ƒ is introduced as follows:

Figure 9 shows the distribution of the electric field along the vertical axis from the center of the solution surface to the collector (0–180 mm) for all four self-made FSE devices. The calculated values of Emax, Eav and ƒ are listed in Table 2. There is little difference between the axial f-values of the four FSE devices. Hence, the axial distributions of the electric field are similar for the four FSE processes. The Emax values are the largest for the SSFSE device.

The morphology of the PAN nanofibers produced by the four self-made FSE devices was investigated by SEM. Figure 11 shows the SEM images and the corresponding diameter distributions of the PAN nanofibers. The average diameters of the fabricated nanofibers along with the corresponding standard deviations and confidence intervals are presented in Table 4. The standard deviations are high as a result of measuring the nanofiber diameters by observing sample data. The given confidence intervals estimate the ranges in which diameters of nanofibers could still be observed. The estimated range is calculated from a given set of sample data [25].

Figure 12 illustrates the yields of the PAN nanofibers fabricated by the different FSE devices. The yield of the MBE device is 4.37 g/h. In our previous work [23], the same device was used to prepare silk fibroin (SF) nanofibers with a yield of 3.1 g/h using a voltage of 50 kV. This finding is explained by the better spinnability of PAN compared to SF. When the structure of the reservoir is modified, the electric field distribution in the FSE process changes, and the nanofiber yield varies even when using the same voltage, working distance and spinning solution. As shown in Figure 12, the yield of the SSFSE method is the highest, followed by the OSFSE, MFSE and MBE methods. This might be because the bubble generation wastes energy possibly decelerating the charged jets during the MBE process resulting in a lower yield of PAN nanofibers. For the MFSE, OSFSE, and SSFSE methods the yields vary with the change of the electric field intensity. The distributions of the electric field intensities displayed in Figure 7 and Table 3 are in good agreement with the experimental results.

Furthermore, the impact of the device design on the morphology and the yield of nanofibers was experimentally investigated. We found that the average diameter of the nanofibers prepared by the MFSE method was the largest. The size distribution of the nanofibers produced by the MBE device was the least uniform. In contrast, the size distributions of the nanofiber generated by the of MFSE and SSFSE devices were more uniform. These experimental data are in accordance with the results of the simulations and the theoretical analysis. Our results show that the SSFSE is the best performing FSE device since it provides the highest quality and the maximum yield of nanofibers. Its yield could reach 20.03 g/h at an applied voltage of 40 kV. Compared with the performance of other spinning devices reported in the literature [13,17,20], the SSFSE device is highly suitable to produce large quantities of high-quality nanofibers at a low working voltage.

The work is financially supported by the National Natural Science Foundation of China (Grant No. 11672198), the Six Talent Peaks Project of the Jiangsu Province (Grant No.GDZB-050), the National Key R&D Program of China: 2017YFC1103602, Foundation project of Jiangsu Advanced Textile Engineering Technology Center (Grant No. XJFZ/2018/ 15), the Natural Science Foundation of Jiangsu Province of China (Grant No. BK20161253) and PAPD (A Project Funded by the Priority Academic Program Development of Jiangsu Higher Education Institutions). Author contributions: L. X. and Y. F. designed the experiments. Y. F. performed the experiments and the characterization, analyzed the data and wrote the paper. L. X. supervised the data analysis and revised the paper. Availability of data and materials: All data generated or analyzed during this study were included in the article.

© 2019 Fang and Xu; licensee Beilstein-Institut.
This is an Open Access article under the terms of the Creative Commons Attribution License (http://creativecommons.org/licenses/by/4.0). Please note that the reuse, redistribution and reproduction in particular requires that the authors and source are credited.
The license is subject to the Beilstein Journal of Nanotechnology terms and conditions: (https://www.beilstein-journals.org/bjnano) 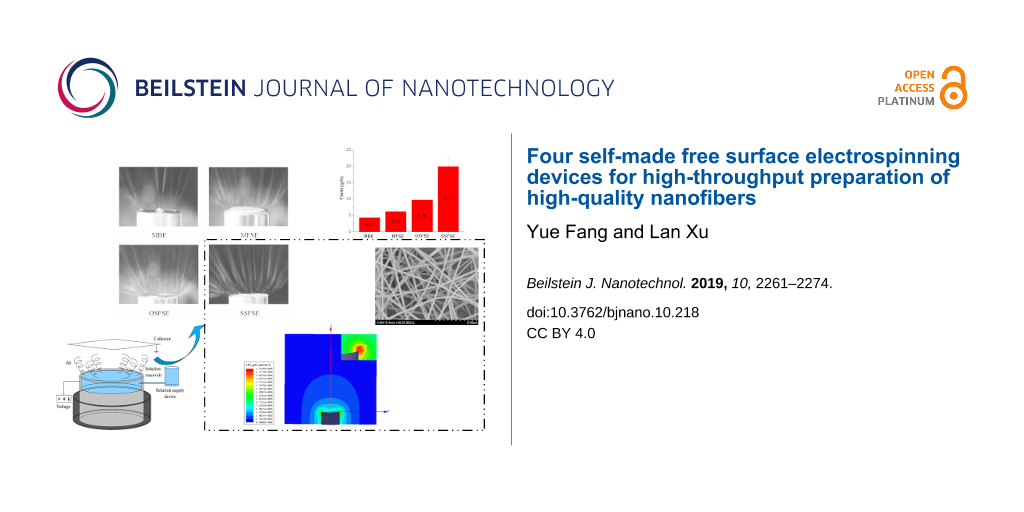