All articles from this author
Flavio Plentz

The large-scale production of high-quality and clean graphene devices, aiming at technological applications, has been a great challenge over the last decade. This is due to the high affinity of graphene with polymers that are usually applied in standard lithography processes and that, inevitably, modify the electrical proprieties of graphene. By Raman spectroscopy and electrical-transport investigations, we correlate the room-temperature carrier mobility of graphene devices with the size of well-ordered domains in graphene. In addition, we show that the size of these well-ordered domains is highly influenced by post-photolithography cleaning processes. Finally, we show that by using poly(dimethylglutarimide) (PMGI) as a protection layer, the production yield of CVD graphene devices is enhanced. Conversely, their electrical properties are deteriorated as compared with devices fabricated by conventional production methods.

The unique properties of graphene, such as high conductivity, high carrier mobility at room temperature, high sensitivity of the electrical properties to surface phenomena and the existence of several routes for its surface functionalization, grant this 2D material plenty of application possibilities [1-8]. Among the several synthesis methods of high-quality graphene, chemical vapor deposition (CVD) stands out as one of the most promising methods for large-scale production [9]. However, the challenges in mass-production of graphene-based devices are a great obstacle for the full development of an electronic industry based on graphene [10]. This is due to the difficulty to avoid structural degradation and chemical contamination of graphene in lithography processes [11]. Because of this, in the present work we investigate by Raman spectroscopy and electrical transport measurements the effects of different post-photolithography cleaning methods on the yield and performance of CVD-based graphene devices.

We made use of CVD graphene on top of a 300 nm thick SiO2 layer, which was purchased from Graphene Platform. The graphene devices were produced in the field-effect transistor configuration (GFET) in two photolithography steps (Figure 1). The first step was employed for defining the graphene device geometry, the second step was used for the fabrication of the electrodes.

In procedure called P1, the steps of photoresist removal (Figure 1e) and the lift-off as well (Figure 1j) were performed whith the resist stripper, N-methyl-2-pyrrolidone (NMP), followed by rinsing in isopropanol (IPA) and deionized water (DI, Figure 2a,b). Figure 2c shows that this procedure seriously damages graphene. We attribute this to the well-known high solubility of graphene in NMP, which tends to promote the delamination of the graphene layer from the substrate. Since procedure P1 is quite destructive, its yield of high-quality GFETs was 10% in a total of 60 devices.

In order to improve the efficiency of device production, we removed the photoresist and LOR in a step-by-step manner, using a second procedure, called P2. At first, the photoresist was removed by 1-methoxy-2-propanol acetate (PGMEA), a solvent towards which LOR is inert (Figure 2d,e). Then, the remaining LOR layer that covered the graphene film, was removed in AZ351B (1:4) (Figure 2f). Procedure P2 was found to be less aggressive than procedure P1 and it increased the efficiency of device production up to 85%, in a total of 60 devices (Figure 2g). In fact, high-yields have been reported in the literature when PMGI is applied as support scaffold in the transfer of CVD graphene [12,13].

To remove residual PMGI from the graphene devices produced by procedure P2, we attempted three different cleaning methods. The first method (C1) consisted of cleaning the devices in a NMP bath. In the second cleaning method (C2), we used N,N-dimethylformamide (DMF) to clean the graphene devices. Finally, a third method (C3) consisted of graphene cleaning by H2/Ar (1:1) annealing at 300 °C for 2 h [17,18]. Nonetheless, we have observed that both cleaning methods C1 and C2, which respectively employ NMP and DMF, were not capable of removing the residual PMGI polymer from the graphene surface. It is evidenced by the fact that the Raman spectrum of graphene device fabricated by procedure P2 (Figure 3c), and the Raman spectra of both graphene devices produced by procedure P2 and cleaned with NMP (Figure 3d) and DMF (Figure 3e) present the same features associated to the PMGI polymer. Regarding the H2/Ar annealing, Figure 3f shows that this process did not remove the residual PMGI polymer completely from the graphene surface, because some Raman bands associated with the polymer are still present.

Therefore, we have a situation in which the cleaning methods either do not clean the graphene surface or promote some degree of cleaning, but at the expense of introducing defects. In order to correlate the results obtained from Raman spectroscopy with the electrical transport properties of the graphene devices, we performed conductivity measurements as a function of gate voltage (Vg) for several devices produced by different lift-off procedures and cleaning methods. Since the neutrality point was beyond 100 V for several devices, we only consider here the transport by holes. Figure 5 shows that graphene conductivity, σ, behaves as a sublinear function of the gate voltage, Vg. This sublinear behavior is associated to a weak-point disorder in graphene, which emerges as a carrier density independent residual resistivity, ρs. The strong disorder and the charged-impurity disorder are responsible for the resistivity (μne)−1, in which μ is the mobility and n is the carrier density [8,21].

where ρ = 1/σ is the measured resistivity of graphene [24]. Then, the graphene mobility was obtained by a linear fit of (rho − ρs)−1 as a function of Vg.

The lattice defects can be modeled as a deep potential well of radius R, which gives rise to the mobility μd, as:

where nd ~ (2RLa)−1 is the defect density and kF corresponds to the Fermi wave vector [21,24]. Using the Thomas–Fermi screening approach, the mobility related to charged impurities can be written as:

where G(2rs) is an analytical function that takes into account the interaction strength in graphene, rs is the interaction parameter and nc is the density of charged impurities [24-26].

We performed electrical transport measurements and Raman spectroscopy investigations to compare the proprieties of CVD graphene-based devices processed using conventional photolithography with devices produced by a recently developed method using LOR as a sacrificial layer. We found that the PMGI molecules introduce disorder in graphene, which impairs the performance of the CVD-graphene based devices. We then applied the most common methods of post-photolithography cleaning in order to remove PMGI molecules. We were able to correlate the electrical mobility to the well-ordered domain size in devices that went through different cleaning procedures. We conclude that the use of LOR as sacrificial layer improves the CVD graphene device production yield, but impair the overall electronic performance of the devices.

© 2019 de Araujo et al.; licensee Beilstein-Institut.
This is an Open Access article under the terms of the Creative Commons Attribution License (http://creativecommons.org/licenses/by/4.0). Please note that the reuse, redistribution and reproduction in particular requires that the authors and source are credited.
The license is subject to the Beilstein Journal of Nanotechnology terms and conditions: (https://www.beilstein-journals.org/bjnano) 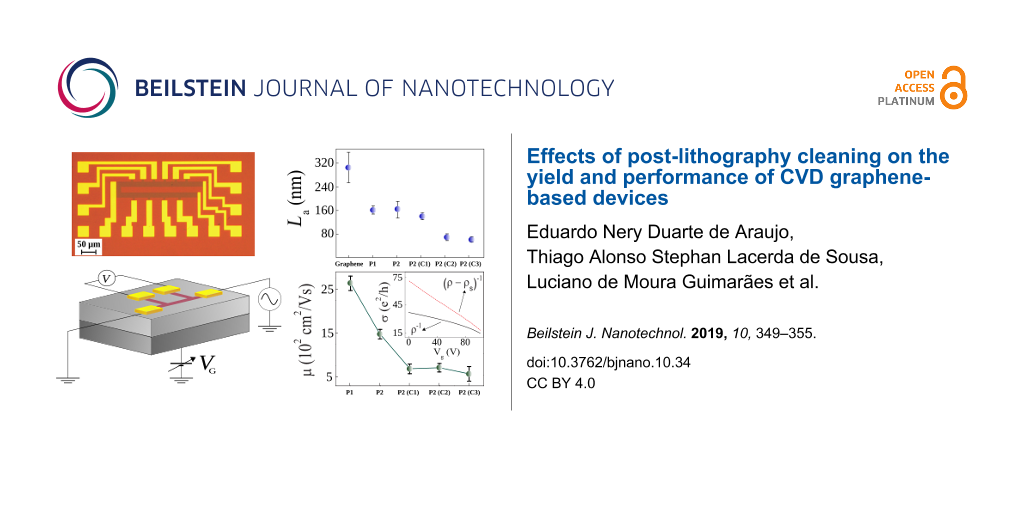