All articles from this author
Zhikang Jiang


All articles from this author
Nan Tian


All articles from this author
Fei Long


All articles from this author
Yanhan Yang


All articles from this author
Danmin Liu

The KP15 nanowires with one-dimensional properties has a defect-free surface, high anisotropy, and carrier mobility which is desirable for the development of novel nanodevices. However, the preparation of nanoscale KP15 is still inefficient. In this work, the Hansen solubility parameters of KP15 were first obtained. Based on the Hansen's empirical theory, the concentration of liquid-exfoliated KP15 nanowires was improved to 0.0458 mg·mL−1 by a solution containing 50% water and 50% acetone. Approximately 79% of the KP15 nanowires had a thickness value below 50 nm and 60.9% of them had a width value below 100 nm. The thinnest KP15 nanowires reached 5.1 nm and had smooth boundaries. Meanwhile, strong temperature-dependent Raman response in exfoliated KP15 nanowires has been observed, which indicates a strong phonon–phonon coupling in those nanowires. This is helpful for non-invasive temperature measurements of KP15 nanodevices.

In a previous study, we exfoliated KP15 in alcohol; however, this method was still inefficient [13]. Herein, the Hansen's empirical theory was firstly introduced to improve the liquid-phase exfoliation efficiency of KP15 nanowires. In addition, Hansen solubility parameters (HSPs) for KP15 were also obtained in this work. By using a solution containing 50% water and 50% acetone, the exfoliation efficiency of KP15 was effectively improved. Our results show that 79% of the KP15 nanowires had thickness values below 50 nm and 60.9% of these nanowires had width values below 100 nm. The thinnest KP15 nanowires reached 5.1 nm and had smooth boundaries. Meanwhile, a strong temperature-dependent Raman response was found in exfoliated KP15 nanowires. This indicates a strong phonon–phonon coupling in KP15 nanowires, which favors non-invasive temperature measurements of KP15 nanodevices.

For the liquid-exfoliation process, 1 mg of KP15 was mixed in 20 mL of solvent and ultrasonically processed at a power of 80 W in an ice bath for 6 h, followed by centrifugation at 2000 rpm for 20 min. For the samples with predetermined concentration, centrifugation was not used.

UV−visible spectrophotometry was performed by using a Shimadzu UV-3101PC system. Atomic force microscopy (AFM) tests were performed in a Multimode 8 system. The Raman tests were performed on a WITec alpha300 RA confocal Raman microscopy system. For the Raman tests, KP15 samples were spun on SiO2(300 nm)/Si substrates. The excitation wavelength used was 532 nm, the spot size was approx. 1 μm, and the laser power was kept below 20 μW. For low-temperature Raman measurements, a Linkam THMS600 cryostat cooled by liquid nitrogen was used to control the temperature. To prevent sample drift, SiO2 (300 nm)/Si substrates with tested KP15 samples were attached by fixtures to the Linkam THMS600 cryostat.

KP15 bulks, prepared by the gas-phase-transfer method, had a flat and smooth surface shown in Figure 1a. The X-ray diffraction patterns of the synthesized KP15 were both theoretically calculated and experimentally measured. The consistency between the two patterns shows that there is no impurity phase (Figure 1b), which confirms an excellent crystallization quality of the KP15 bulks.

According to the Hansen’s theory [19], the dispersed concentration C of a KP15 dispersion prepared by liquid exfoliation can be expressed by Equation 1 as follows.

where A is the absorbance, K is the absorption coefficient of the material, b is the absorbing layer thickness (which in this work is the width of the cuvette, i.e., 1 cm), and C is the concentration of the KP15 dispersions. The absorbance A and the absorption coefficient K are related to the wavelength of the incident light. To determine A and K, it is necessary to choose a specific incident wavelength. The bandgap of bulk KP15 is approx. 1.75 eV [20]. However, according to our previous study, with thickness reduction of the KP15 nanowires, a surface-state luminescence at 693 nm gradually dominates in the KP15 nanowire [14]. This could affect light absorption properties of KP15 due to its decreased size.

To avoid the generation of concentration error caused by the absorbance influence of the surface state, a wavelength (800 nm) which is far away from the bandgap of KP15 bulk and surface state in the KP15 nanowires was chosen. Some dispersions for which we predetermined the concentration were prepared to fit and determine the absorption coefficient K. Solutions of five different concentrations of KP15 dispersions in butyrolactone were prepared by liquid exfoliation with a predetermined concentration. UV−visible absorption spectra results are shown in Figure 2. The concentration linearly varies with absorbance. The slope of this fitted linear equation is 3.86 ± 0.13. This means that the absorption coefficient of KP15 is 3.86 ± 0.13 mL·mg−1·cm−1.

where ϕi,comp is the volume fraction of the corresponding solvent and δi,comp is the HSPs of the solvent. The concentration of the KP15 dispersion can be measured by the Lambert–Beer law (Equation 3). As shown in Figure 6a, by tuning the volume fraction of acetone in the mixed solution, the HSPs of the mixed solution can be close to those of KP15, and the exfoliation efficiency can be clearly improved. The concentration values of the KP15 suspension in the solutions were 0.0268 mg·mL−1 (exfoliated in deionized water), 0.0079 mg·mL−1 (acetone), and 0.0236 mg·mL−1 (alcohol), respectively [13]. When the solvent mixture with a 50% volume fraction of acetone is used for stripping, the concentration of the KP15 dispersion finally increases to 0.0458 mg·mL−1. At this point, the parameter τ is close to the minimum value.

In summary, based on the Hansen's empirical theory, the liquid phase exfoliation efficiency of KP15 nanowires has been improved. The HSPs of KP15 were calculated to be δD = 17.60 MPa1/2, δP = 11.19 MPa1/2, and δH = 8.95 MPa1/2. In addition, based on the Hansen's empirical theory, the exfoliation efficiency was improved by adjusting the ratio of water and acetone. When the mixed solvents had the smallest τ, the thicknesses of 79% of liquid-exfoliated KP15 nanowires were below 50 nm and the widths of 60.9% of KP15 nanowires were below 100 nm. Meanwhile, a strong temperature-dependent Raman response has been found in exfoliated KP15, which may help with non-invasive temperature measurements of KP15 nanodevices.

© 2022 Huang et al.; licensee Beilstein-Institut.
This is an open access article licensed under the terms of the Beilstein-Institut Open Access License Agreement (https://www.beilstein-journals.org/bjnano/terms), which is identical to the Creative Commons Attribution 4.0 International License (https://creativecommons.org/licenses/by/4.0). The reuse of material under this license requires that the author(s), source and license are credited. Third-party material in this article could be subject to other licenses (typically indicated in the credit line), and in this case, users are required to obtain permission from the license holder to reuse the material. 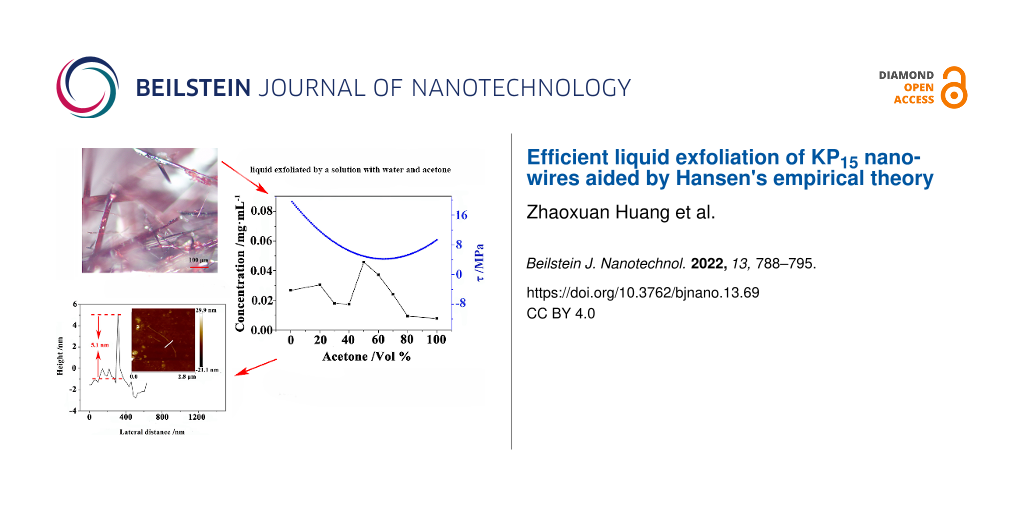