All articles from this author
Yongjuan Chen


All articles from this author
Jialin Zhao


All articles from this author
Zhaohui Li

In this study, NiS/ZnIn2S4 nanocomposites were successfully prepared via a facile two-step hydrothermal process. The as-prepared samples were characterized by X-ray diffraction (XRD), X-ray photoelectron spectroscopy (XPS), transmission electron microscopy (TEM) and high-resolution transmission electron microscopy (HRTEM). Their photocatalytic performance for hydrogen evolution under visible light irradiation was also investigated. It was found that the photocatalytic hydrogen evolution activity over hexagonal ZnIn2S4 can be significantly increased by loading NiS as a co-catalyst. The formation of a good junction between ZnIn2S4 and NiS via the two step hydrothermal processes is beneficial for the directional migration of the photo-excited electrons from ZnIn2S4 to NiS. The highest photocatalytic hydrogen evolution rate (104.7 μmol/h), which is even higher than that over Pt/ZnIn2S4 nanocomposite (77.8 μmol/h), was observed over an optimum NiS loading amount of 0.5 wt %. This work demonstrates a high potential of the developing of environmental friendly, cheap noble-metal-free co-catalyst for semiconductor-based photocatalytic hydrogen evolution.

Hydrogen is a clean and green fuel. The conversion and store of solar energy in the form of hydrogen by photocatalytic water splitting holds great promise to meet the future energy and environment requirements [1-3]. Ever since the pioneering work of a photo-electrochemical cell using Pt-TiO2 electrodes for water splitting by Fujishima and Honda in 1972, great efforts have been devoted to the development of highly efficient semiconductor photocatalysts for hydrogen production [4]. So far, a variety of active photocatalysts for hydrogen production, including metal oxides [5-8], sulfides [9-11], oxynitrides [12-14], as well as the metal-free semiconductors [15] have already been developed.

Among the numerous types of semiconductor systems studied, metal sulfides have demonstrated promising activities towards hydrogen evolution from water containing sacrificial reagents under visible light. ZnIn2S4 is a ternary chalcogenide with a suitable band gap (2.34–2.48 eV) well corresponding to the visible light absorption. ZnIn2S4 exhibits two distinct polymorphs based on cubic and hexagonal lattices [16], which can be controlled synthesized via a facile hydrothermal method using different precursors. Previous studies revealed that both polymorphs of ZnIn2S4 are active for photocatalytic hydrogen generation under visible light irradiations and show considerable chemical stability [17-19]. However, the photocatalytic hydrogen evolution activity over pure ZnIn2S4 is low, due to the poor separation efficiency and migration ability of the photo-excited charge carriers. A variety of effects have been made to enhance the photocatalytic performance of ZnIn2S4. For example, by size control on ZnIn2S4 [20], doping with transition metals [21] and incorporation of metal sulfides [22] or RGO [23] into ZnIn2S4 nanostructures, the photocatalytic performance for hydrogen evolution over ZnIn2S4 have been enhanced to a certain degree.

Figure 2a shows the TEM image of our previous studies that the hydrothermally prepared ZnIn2S4 sample was composed of microspheres with dimension in the range of 2–6 μm assembled by densely packed petals [16]. However, the TEM image of the current NiS/ZnIn2S4 sample shows that the ZnIn2S4 microspheres were partially decomposed after the second hydrothermal process (Figure 2b). Although no characteristic diffraction peaks corresponding to NiS nanoparticles were observed in the XRD patterns, the existence of NiS in the nanocomposite is confirmed by the HRTEM image (Figure 2c). Clear lattice fringes of 0.32 nm and 0.29 nm, which can be ascribed to the (102) plane of hexagonal ZnIn2S4 and the (300) plane of rhombohedral NiS respectively, can be observed. As shown in Figure 2b, the NiS nanoparticle has a diameter of about 5 nm and directly contact with ZnIn2S4. It is believed that the second hydrothermal treatment during the deposition of NiS on ZnIn2S4 is important for the formation of a junction between these two components. The energy-dispersive X-ray spectrometry (EDS) analysis as shown in the inset of Figure 2c also confirms the existence of Ni.

XPS analyses were carried out to evaluate the surface chemical composition and electronic state on 0.5 wt % NiS/ZnIn2S4 sample, and the results are shown in Figure 3. The survey XPS spectrum, as shown in Figure 3a, confirms the existence of Zn, In, and S. The high resolution XPS spectra of S 2p region can be deconvoluted into two peaks at around 161.7 and 162.8 eV, which can be assigned to S 2p3/2 and S 2p1/2 respectively in S2− (Figure 3b). As compared to the binding energy of Zn 2p observed over pure ZnIn2S4 (1020.7 and 1043.6 eV), a higher binding energy shift is observed over NiS/ZnIn2S4 nanocoposite (1021.8 and 1044.7 eV) (Figure 3c). Similar high binding energy shift is also observed over the high resolution XPS spectra of In 3d (Figure 3d). Such a shift to high binding energy suggests a strong interaction between ZnIn2S4 and NiS. It is believed that when ZnIn2S4 are connected to NiS, the electron transfer from ZnIn2S4 to the more electronegative NiS may result in a decrease of the electron density of Zn2+ and In3+. Therefore the binding energy of Zn 2p and In 3d shift to a high binding energy in NiS/ZnIn2S4 nanocoposite. No peaks in the Ni 2p region were observed in the XPS spectra of 0.5% NiS/ZnIn2S4, probably due to the low amount of NiS loaded and its embed within the ZnIn2S4 nanostructures.

The UV–visible diffuse reflectance spectra of NiS/ZnIn2S4 nanocomposites are displayed in Figure 4. Pure ZnIn2S4 has an absorption edge at about 540 nm with an energy gap estimated to be 2.4 eV. Although the loading of NiS onto ZnIn2S4 does not obviously change the band gap of ZnIn2S4, the resultant NiS/ZnIn2S4 nanocomposites show an enhanced absorption in the visible light region from 550 to 800 nm, attributable to the absorption of NiS.

Preparations. All the reagents are analytical grade and used without further purifications. Hexagonal ZnIn2S4 powder was synthesized according to our previously reported method [16]. In a typical synthesis of 0.5 wt % NiS/ZnIn2S4 photocatalyst, 0.2 g ZnIn2S4, 2.8 mg nickel acetate and 0.9 mg thioacetamide (TAA) were dispersed in 70 mL of de-ionized water by stirring and ultra-sonication for 2 h. The resultant solution was transferred to a 100 mL Teflon liner, sealed in the stainless steel autoclave and heated at 120 °C for 4 h. After the autoclave was cooled to room temperature, the product was collected and washed with de-ionized water several times before it was dried at 60 °C to obtain the final product. Samples with different amount of NiS (0.2, 0.25, 1.0, 2.0 wt %) were prepared by using different amounts of nickel acetate and TAA precursor during the hydrothermal treatment at 120 °C, while keeping other conditions the same.

0.5 wt % Pt/ZnIn2S4 was prepared by a photo-deposited method using H2PtCl6·6H2O as the starting material. Pure NiS was prepared by hydrothermal using nickel acetate and TAA as precursors at 120 °C for 4 h.

Characterizations. X-ray diffraction (XRD) patterns were collected on a Bruker D8 Advance X-ray diffractometer with Cu Kα radiation. The transmission electron microscopy (TEM) and high-resolution transmission electron microscopy (HRTEM) images were measured by a JEOL model JEM 2010 EX instrument at an accelerating voltage of 200 kV. The powder particles were supported on a carbon film coated on a 3 mm diameter fine-mesh copper grid. A suspension in ethanol was sonicated and a drop was dripped on the support film. X-ray photoelectron spectroscopy (XPS) measurements were performed on a PHI Quantum 2000 XPS system with a monochromatic Al Kα source and a charge neutralizer. All of the binding energies were referred to the C 1s peak at 284.8 eV of the surface adventitious carbon. UV–visible diffraction spectra (UV–vis DRS) of the powders were obtained for the dry pressed disk samples using a UV–visible spectrophotometer (Cary 500 Scan Spectrophotometers, Varian). BaSO4 was used as a reflectance standard.

Photocatalytic hydrogen evolution. Photocatalytic hydrogen evolution experiments were carried out in a closed gas circulation and evacuation system fitted with a top Pyrex window. 50 mg of photocatalyst was dispersed in 100 mL of aqueous solution containing 0.5 M Na2SO3 and 0.43 M Na2S as sacrificial reagents. The suspension was irradiated with a 300 W Xe lamp equipped with a 420 nm cutoff filter to provide the visible light irradiation. The temperature of the reactant solution was maintained at room temperature by a flow of cooling water during the photocatalytic reaction. The amount of hydrogen evolved was determined with an on-line gas chromatography equipped with a TCD detector.

© 2013 Wei et al; licensee Beilstein-Institut.
This is an Open Access article under the terms of the Creative Commons Attribution License (http://creativecommons.org/licenses/by/2.0), which permits unrestricted use, distribution, and reproduction in any medium, provided the original work is properly cited.
The license is subject to the Beilstein Journal of Nanotechnology terms and conditions: (http://www.beilstein-journals.org/bjnano) 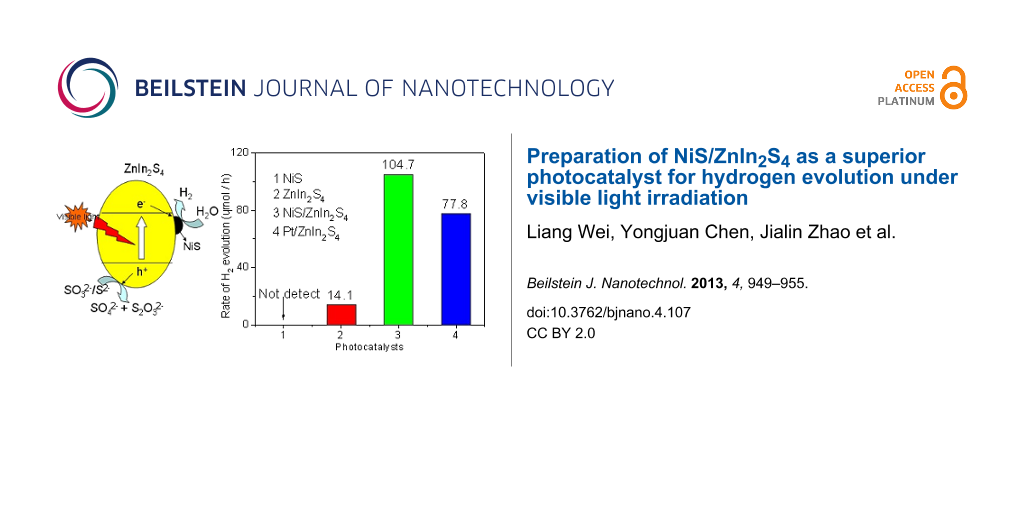