All articles from this author
Lijuan Sun


All articles from this author
Hu Wang


All articles from this author
Qin Long


All articles from this author
Xuefei Lai

In contrast to the majority of related experiments, which are carried out in organic solvents at high temperatures and pressures, cobalt nanowires were synthesized by chemical reduction in aqueous solution with the assistance of polyvinylpyrrolidone (PVP) as surfactant under moderate conditions for the first time, while an external magnetic field of 40 mT was applied. Uniform linear cobalt nanowires with relatively smooth surfaces and firm structure were obtained and possessed an average diameter of about 100 nm with a coating layer of PVP. By comparison, the external magnetic field and PVP were proven to have a crucial influence on the morphology and the size of the synthesized cobalt nanowires. The prepared cobalt nanowires are crystalline and mainly consist of cobalt as well as a small amount of platinum. Magnetic measurements showed that the resultant cobalt nanowires were ferromagnetic at room temperature. The saturation magnetization (Ms) and the coercivity (Hc) were 112.00 emu/g and 352.87 Oe, respectively.

In recent years, cobalt nanowires, as a ferromagnetic material, have attracted considerable attention due to their outstanding magnetic properties and excellent performance in applications in high-density magnetic storage media [1,2], in immune magnetic separation [3], in gene delivery [4] and as targeted drug carrier [5]. Hydrothermal and solvothermal methods are well-developed approaches to fabricate cobalt nanowires [6-10]. However, such methods set high requirements for the equipment because of high temperatures and pressures. Therefore, researches concerning a solution-reduction method under moderate conditions for preparing cobalt nanowires have been carried out due to their simplicity and low cost [11,12]. Organics, such as ethylene glycol and propylene glycol, are used to serve as solvents in most of the experiments. They can provide stable process for preparing nanowires owing to the relatively high viscosity of these solvents. Reactions proceed gently in organic solvents, which results in a high degree of crystallization and a high dispersibility of the nanowires. Nevertheless, organic solvents are not easily washed out of products, and the most important problem is that they are not environmentally friendly. Compared to organic solvents, the use of water as the solvent is cheaper and more convenient and does less harm to the environment. There are few reports on preparing cobalt nanowires in aqueous solution up to now [13]. In our previous studies, we have successfully prepared nickel and nickel/copper nanowires [14-16], and cobalt nanowires were synthesized using NaBH4 as initiator without surfactant in ethylene glycol solution with an external magnetic field under moderate conditions [12]. In this research, with polyvinylpyrrolidone (PVP) as surfactant, uniform linear cobalt nanowires with a mean diameter of about 100 nm were synthesized in aqueous solution under an external magnetic field at low temperature and atmosphere pressure for the first time.

All the chemical reagents used in the experiment were analytical grade. CoCl2·6H2O, EDTA-2Na and PVP acted as Co precursor, chelating agent and surfactant, respectively. N2H4·H2O and H2PtCl6·6H2O worked as reductant and initiator, respectively. The synthesis was performed inside water bath set at 80 °C. Firstly, 6 mmol CoCl2·6H2O and 6 mmol EDTA-2Na were dissolved in 60 mL distilled water inside a polytetrafluoroethylene beaker placed between two magnets, with an applied field of 40 mT measured by a HT20 tesla meter. Then NaOH was added to adjust the pH value of the solution to about 14, and 0.18 g PVP was dissolved in the solution by thorough stirring. Next, 0.30 mL N2H4·H2O and 0.12 mL of 0.0253 M H2PtCl6·6H2O were mixed with the solution. The reaction proceeded for 15 min, during which nanowires were formed gradually. Finally, the prepared nanowires were separated from the solution with a magnet, and washed ultrasonically in distilled water and ethanol three times each to remove the organics from the surface of the nanowires.

Figure 2 shows the EDS spectrum of the PVP-protected cobalt nanowires prepared under an external magnetic field. Weight percent (wt %) and atom percent (atom %) of each element were determined by EDS analysis. The silicon peak stems from the silicon wafer substrate. For the sake of clarity it was left out from the calculation of the elemental composition. Cobalt and platinum acting as heterogeneous nucleation sites are clearly seen. Carbon and oxygen can be ascribed to the PVP coating on the nanowires and, to some extent, to CO2 adsorbed on nanowires during the preparation of samples. There is also very little residual chlorine detected, which comes from H2PtCl6·6H2O.

XRD patterns of the cobalt nanowires prepared with PVP and without PVP under an external magnetic field are shown in Figure 3a,b, respectively. The corresponding SAED patterns are shown in Figure 3c,d. The diffraction peaks of cobalt nanowires prepared with PVP and without PVP could be indexed with the reflections of face-centered cubic (fcc) Co (PDF standard cards, JCPDS 15-0806, space group Fm−3m). Two peaks of fcc Co (2θ = 44.43° and 2θ = 75.94°) corresponding to Miller indices (111) and (220), respectively, were observed in each XRD pattern, and a diffraction ring as well as some scattered diffraction mottling were shown in each SAED pattern, which demonstrated that the resultant nanowires possessed crystal structure and PVP had only little impact on that.

Figure 4 displays the hysteresis loop measured at room temperature under an applied magnetic field of up to 25000 Oe for the PVP-protected cobalt nanowires obtained in aqueous solution under an external magnetic field of 40 mT. An expanded plot is shown in the insert for field strengths between −6000 Oe and 6000 Oe. The hysteresis loop suggested that the synthesized cobalt nanowires were ferromagnetic at room temperature, which differs from the superparamagnetic property exhibited in the previous report [13]. The coercivity (Hc) of the cobalt nanowires were 352.87 Oe, and the saturation magnetization (Ms) were 112.00 emu g−1, which was lower than the corresponding value of bulk cobalt (162.5 emu g−1) [11].

In summary, uniform linear cobalt nanowires with a mean diameter of about 100 nm were obtained by chemical reduction in aqueous solution with an external magnetic field for the first time. The cobalt nanowires exhibited a relatively smooth surface and firm structure with a layer of PVP, which had a significant impact on the morphology and size of nanowires. The synthesized nanowires mainly consisted of cobalt and a small amount of platinum with crystal structure. Cobalt nanowires prepared were ferromagnetic at room temperature. The saturation magnetization (Ms) and the coercivity (Hc) were 112.00 emu/g and 352.87 Oe, respectively.

Financial supports by the National Natural Science Foundation of China (Grant No. 50904046) is gratefully acknowledged.

Controlling the proximity effect in a Co/Nb multilayer: the properties of electronic transport

© 2016 Li et al.; licensee Beilstein-Institut.
This is an Open Access article under the terms of the Creative Commons Attribution License (http://creativecommons.org/licenses/by/2.0), which permits unrestricted use, distribution, and reproduction in any medium, provided the original work is properly cited.
The license is subject to the Beilstein Journal of Nanotechnology terms and conditions: (http://www.beilstein-journals.org/bjnano) 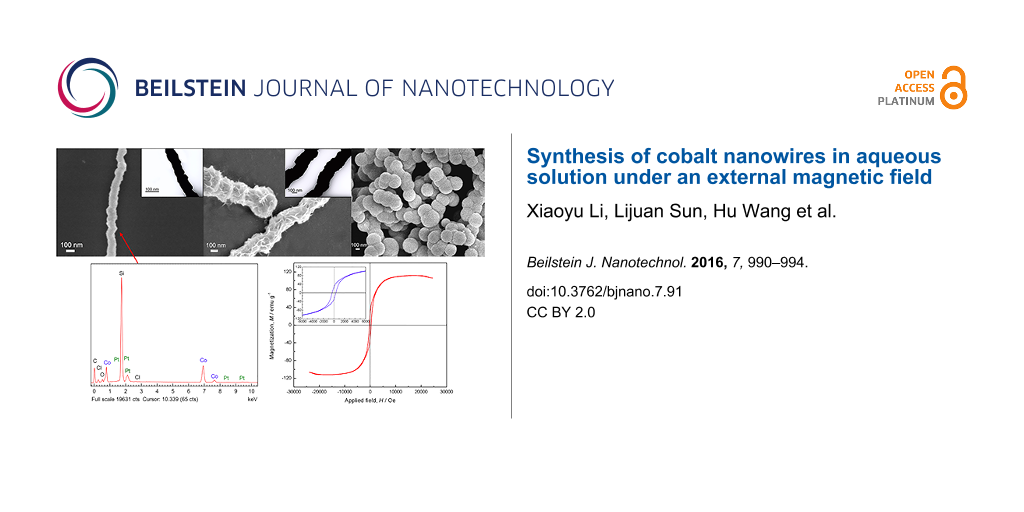