Modeling of the growth of GaAs–AlGaAs core–shell nanowires


All articles from this author
Peter W. Voorhees


All articles from this author
Stephen H. Davis

Heterostructured GaAs–AlGaAs core–shell nanowires with have attracted much attention because of their significant advantages and great potential for creating high performance nanophotonics and nanoelectronics. The spontaneous formation of Al-rich stripes along certain crystallographic directions and quantum dots near the apexes of the shell are observed in AlGaAs shells. Controlling the formation of these core–shell heterostructures remains challenging. A two-dimensional model valid on the wire cross section, that accounts for capillarity in the faceted surface limit and deposition has been developed for the evolution of the shell morphology and concentration in AlxGa1−xAs alloys. The model includes a completely faceted shell–vapor interface. The objective is to understand the mechanisms of the formation of the radial heterostructures (Al-rich stripes and Al-poor quantum dots) in the nanowire shell. There are two issues that need to be understood. One is the mechanism responsible for the morphological evolution of the shells. Analysis and simulation results suggest that deposition introduces facets not present on the equilibrium Wulff shapes. A balance between diffusion and deposition yields the small facets with sizes varying slowly over time, which yield stripe structures, whereas deposition-dominated growth can lead to quantum-dot structures observed in experiments. There is no self-limiting facet size in this case. The other issue is the mechanism responsible for the segregation of Al atoms in the shells. It is found that the mobility difference of the atoms on the {112} and {110} facets together determine the non-uniform concentration of the atoms in the shell. In particular, even though the mobility of Al on {110} facets is smaller than that of Ga, Al-rich stripes are predicted to form along the {112} facets when the difference of the mobilities of Al and Ga atoms is sufficiently large on {112} facets. As the size of the shell increases, deposition becomes more important. The Al-poor dots are obtained at the apices of {112} facets, if the attachment rate of Al atoms is smaller there.

Core–shell nanowires with heterostructures hold great promise in photonic and electronic applications because of their high sensitivity to electronic and magnetic fields. However, controlling the formation of these heterostructures remains a challenge because they are typically embedded in 3D matrices. One of the potential solutions to this problem is to create heterostructures near the edges of the nanowires. Classical approaches to create this kind of heterostructure are to deposit materials with lattice parameters different from that of the wires, such as growing a Ge shell on a Si nanowire [1], so that the quantum dots form as a result of stresses generated by the lattice parameter mismatch. Recently, GaAs has been used as substrates to deposit AlGaAs on their sides. Heiss et al. [2] observed that the deposition of the AlGaAs layer leads to Al-poor quantum dots located within the fork-like Al-rich stripes along the

Yet, there is a very small elastic mismatch between AlGaAs shell and GaAs core. So, the question is, how do these heterostructures form in this experiment? Moreover, many other experiments also observe radial heterostructures with the same materials [3]. Jiang et al. [5] also observed Al-rich stripes along the

directions. Zhang et al. [4] obtained a three-fold symmetry structure with Al-rich stripes (Figure 1). Thus, an understanding of the mechanisms leading to these heterostructures could be very helpful in controlling the formation of these core–shell nanowires.

There are two issues that need to be understood. One is the mechanism responsible for the morphological evolution of the shells. The surface energy density on the {112} facets is at least three times larger than that on the {110} facets. Energy minimization thus tells us that there are no {112} facets in the equilibrium state. Thus, the question is, how do the {112} facets, which are not present on the Wulff shape, arise in the configuration of the shell of nanowires? The other issue is the mechanism responsible for the segregation of Al atoms in the shells. More specifically, under certain deposition conditions, Al atoms move slower than Ga atoms along the {110} facets [6]. If the atoms move from {110} to {112} facets, then the Al atoms should be left behind on the {110} facets rather than accumulate in the

These problems are solved in [7] and [8], respectively. For simplicity, at first a pure material is deposited around the hexagonal core to investigate the mechanisms governing the morphological evolution. In [7], we proposed a mathematical model for the deposition of pure materials onto a faceted nanowire. In the model, the growth of each facet is due to the deposition of atoms from the vapor and surface–atom diffusion from its neighbouring facets (Figure 2).

where ni is the unit normal vector of the i-th facet and γ(ni) is the surface energy density on the i-th facet. Thus, if there is deposition, the mass conservation around the surface gives the following equations:

where ui is the normal velocity of the i-th facet,

. Thus, surface diffusion tends to move the atoms from {110} to {112} facets and eventually the {112} facets disappear (black line). In addition, through this numerical example, it is seen that the dynamic simulation result yields the equilibrium Wulff shape.

Now, consider deposition in the process of growth of the shell with the same conditions as the last numerical simulation, i.e., F{112} = 1.1F{110} with F{110} being large enough. These deposition rates can be different on facets of different orientations due to different sticking coefficients or exchange rates between the surface and bulk. Instead of getting a hexagonal shape, a dodecagonal shell is obtained (Figure 4a). Moreover, as the thickness of the shell gets large, the ratio between the lengths of the facets approaches a non-zero constant, i.e., l{112}/l{110} ≈ ΔF{112}/ΔF{110} = 0.202 (Figure 4b). This is because diffusion becomes negligible compared with deposition as the size of the shell gets large (see Equation 6). Moreover, when the thickness of the shell is large enough, this ratio does not change, even though the size of the facets continue to grow; this is a self-similar shape, the “kinetic Wulff shape” because it is obtained when kinetic effects dominate. Thus, it is shown that deposition allows for the possibility of {112} facets that are not present on the equilibrium Wulff shape.

According to the discussions above, surface diffusion tends to remove the {112} facets whereas deposition tends to preserve them. Figure 5a shows the balance between the surface diffusion and deposition giving a slowly varying facet size at early times. The numerical simulation is compared with the experiment result in [3] (Figure 5b) giving almost quantitative agreement. When a certain thickness of the shell is reached, the size of the {112} facets increases rapidly (Figure 6). As shown in the inset in Figure 6b, the length of {112} facets evolves with the increasing of the thickness of the shell, even though the rate of change is much smaller than that of {110} facets at early time. This implies that the length of the {112} facets is never constant over time.

Given that there is no self-limiting size for any facet, another set of deposition rates can yield the dot configuration that is formed spontaneously by a transient growth (Figure 7b). The configuration obtained in the numerical simulation is very close to that seen experimentally (Figure 7a).

Besides the dot configuration shown in Figure 7b, Heiss et al. [2] also observed the segregation of Al in the shell of the nanowire (see the Al concentration shown in Figure 7b). It is obvious that a model assuming pure materials cannot address the mechanisms leading to the non-homogeneous distribution of Al in the shell. A two-dimensional fully faceted model [8] was developed for the growth of the shell with an AxB1−x (AlxGa1−xAs) alloy on a hexagonal core. Surface morphology and composition on the i-th facet evolve as

where δ is the ratio of the density of lattice sites on the surface to that in the bulk. For each component m, ξm is the local composition fraction of atoms m of the surface layer and

The mobility of Ga atoms on the {110} facets is difficult to measure. However, the measurement in [6] gives a diffusion of Ga that is ten times larger than that of Al atoms, i.e.,

. The diffusivities of Al and Ga are likely functions of surface reconstructions and thus can be functions of the deposition conditions. For simplicity, take

where γ0(n) is the surface energy density for pure atoms A or atoms B, kB is Boltzmann’s constant, T is the absolute temperature, Γ0 and ρ0 are the lattice sites densities on the surface and in the bulk, respectively. In the case considered here un > 0, the advancing surface leaves behind material with composition CA determined by the equilibrium with the surface layer, (1/δ)∂γ/∂ξA = dgα/dCA[8,14,16,17]. In experiments,

In the numerical simulation, suppose the Al atoms diffuse much faster than Ga atoms on the {112} facets. For example,

. This is exaggerated, but it serves to illustrate the basic concepts that lead to stripes and dots. Under these conditions, it is shown first that both Al and Ga atoms tend to move from {110} to {112} facets because

(Figure 8a). Second, Figure 8b shows that the portion of Al atoms subjected to the tangential diffusion fluxes from {112} to {110} facets along the surface at the corners of {112} and {110} facets (JsA/(JsA + JsB)) are much larger than the portion of Al atoms subjected to the deposition flux that introduces the accumulation of Al atoms along the {112} facets (Figure 9). Moreover, this effect is enhanced within a certain thickness of the shell because surface diffusion dominates over deposition at early times. As time proceeds, the thickness of the shell of the nanowire gets large, diffusion gets weaker with a decrease of

If it is harder for Al atoms to attach on the {112} than on the {110} facets from the deposition flux (for example,

= 0.330) then the concentration of Al atoms along each facet tends to be a constant that is equal to its attachment rate on the corresponding facets in the deposition-dominated regime (Figure 10). The behaviour of the segregation is similar to the results of the former numerical simulation in the surface-diffusion-dominated regime (in this case

). This explains why the Al-poor quantum dots can grow adjacent to an Al-rich stripe in some experiments [2].

The presence of stripes and dots also strongly depends on the diffusivities of Al and Ga on the {110} facets. As the ratio between the diffusion coefficients on {110} facets approach unity, the ratio between the diffusion coefficients of Al between {110} and {112} facets necessary to get stripes and dots becomes much smaller than 1000. In particular, according to the results shown in Figure 11, a change from

= 0.5 will lead to a decrease of the critical value of

to yield Al-rich stripes along the

directions down to about a tenth.

is essentially determined by the surface energy densities of the pure materials on the facets. Therefore, the mechanisms for the morphological evolution in pure materials [7] are still applicable in the case of alloys.

The authors would like to thank Jean-Noël Aqua, Lincoln J. Lauhon and Anna Fontcuberta i Morral for helpful discussions. This research was supported by the Office of Naval Research under Grant no. N00014-14-1-0697.

© 2017 Zhang et al.; licensee Beilstein-Institut.
This is an Open Access article under the terms of the Creative Commons Attribution License (http://creativecommons.org/licenses/by/4.0), which permits unrestricted use, distribution, and reproduction in any medium, provided the original work is properly cited.
The license is subject to the Beilstein Journal of Nanotechnology terms and conditions: (http://www.beilstein-journals.org/bjnano) 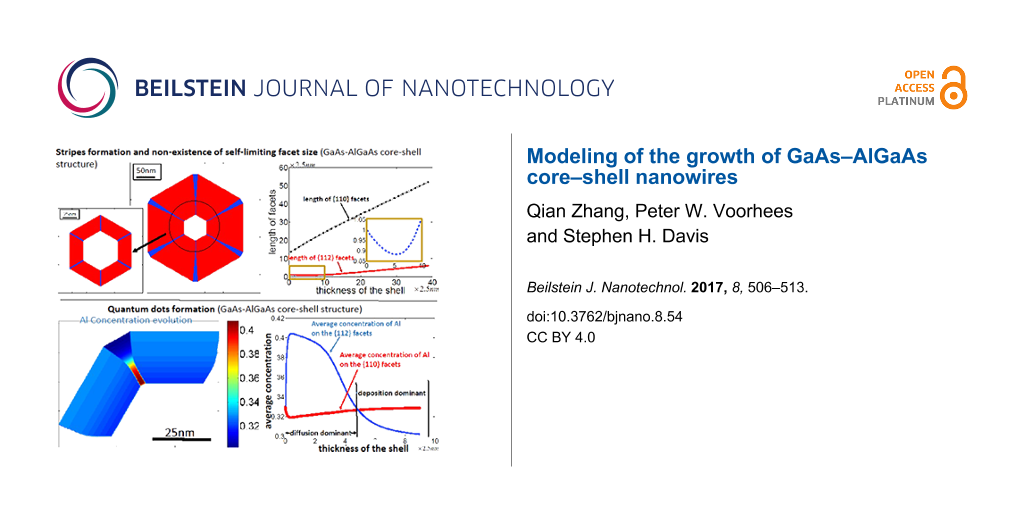