All articles from this author
Yanjun Chen


All articles from this author
Chaoran Qin


All articles from this author
Zheng Zhang


All articles from this author
Shuai Ma


All articles from this author
Xiuru Cai


All articles from this author
Xueqian Li


All articles from this author
Yifeng Wang

Graphene is attracting more attention due to its promising applications in many fields [3-5]. However, its application is limited due to the fact that it aggregates and disperses poorly in solvents, which seriously limits its application [22,23]. It was found that the unmodified rGO had poor dispersion in the chitosan solution, so it was difficult to form a stable deposition solution to perform the electrodeposition. To solve this problem, HACC-rGO was prepared according to our previously reported method [29]. The preparation approach of HACC-rGO is illustrated in Figure 1a. In this approach, the 2-hydroxypropyltrimethylammonium chloride chitosan-modified graphene oxide (HACC-GO) was prepared at first through the noncovalent electrostatic interaction between 2-hydroxypropyltrimethylammonium chloride chitosan (HACC) and graphene oxide (GO), and subsequently the HACC-GO was reduced by hydrazine hydrate to obtain the HACC-rGO. In our previous work, the structure and morphology of the resulting HACC-rGO have been characterized by infrared spectroscopy, X-ray diffraction (XRD) and field emission scanning electron microscopy (FE-SEM) [29]. As shown in Figure 1b, the flake size of the resulting HACC-rGO is approximately 10 μm. In Figure 1c, the peak at 1350 cm−1 (usually called the D-band) represents the disordered carbon atoms and structure defects. The peak at 1580 cm−1 (usually called the G-band) suggests the presence of crystalline graphitic carbon. The intensity ratio of the D to G-band can be employed to evaluate the structure disorder of carbon materials [30,31]. Thus, the Raman spectroscopy analysis of HACC-rGO suggests that there exist some structural defects in HACC-rGO. Particularly, the resulting HACC-rGO disperses well in aqueous solutions, and it also exhibits good dispersion stability in the solution. Figure 1d shows that HACC-rGO can be well-dispersed in the chitosan solution to form a homogeneous solution, and the mixed solution remains stable even after 24 h. On the contrary, Figure 1e shows that the unmodified rGO does not disperse well in the chitosan solution, and it also has poor dispersion stability in the solution. Thus, HACC-rGO can be well-dispersed in the chitosan solution to form a stable deposition solution, which is extremely beneficial to its further electrodeposition.

From the performance analysis described above, it is found that the HACC-rGO/CS film generated by the coordination deposition method has a homogeneous surface, which is beneficial to subsequent applications of the deposited film. In contrast, the cathodically deposited graphene films have a rough surface with many surface defects [20,37]. On the other hand, the HACC-rGO/CS film in this work is able to be completely peeled from the electrodes and used independently. However, the electrodeposited graphene films reported elsewhere were not detached from the electrodes [19,38].

Figure 7a shows the differential pulse voltammetry (DPV) of the GCE with the deposited HACC-rGO/CS film in the presence of 1-naphthol with different concentrations. The peak current for 1-naphthol increases with the increase of 1-naphthol concentration from 0.5 to 10 μM. It is shown that the detection limit for 1-naphthol is approximately 0.5 μM. In contrast, Wang et al. reported that GCE modified with carbon nanotube networks joined by Pt nanoparticles has the detection limit of 0.5 μM for 1-naphthol detection, which is similar to that of our work [46]. Additionally, Figure 7b shows that there is an obvious peak current in the CV for 1.0 mM 1-naphthol, whereas there is no obvious peak current in the CVs for 1.0 mM NaCl and 1.0 mM K2SO4, indicating that the GCE with the deposited HACC-rGO/CS film has an anti-interference capability towards 1-naphthol. Therefore, using the electrodeposition method in this work, we can straightforwardly and conveniently build the deposited rGO/chitosan nanocomposite film on the electrode for electrochemical detection.

HACC-rGO was prepared using a previously reported method [29]. Briefly, 100 mg of GO was dispersed in 30 mL of 0.05 M NaOH solution by ultrasonication, and the GO dispersion was added in 100 mL of HACC aqueous solution (0.1% w/v) to generate HACC-GO. Then the pH of the solution was adjusted to 10 with 0.1 M NaOH. Subsequently, HACC-GO was reduced to HACC-rGO by adding 0.4 g of hydrazine hydrate to the solution, and reacting at room temperature for 20 min, then reacting at 80 °C for 2 h. Finally, the resulting products were filtered, washed with distilled water, and vacuum dried to obtain HACC-rGO.

Electrodeposition of HACC-rGO with chitosan

The electrodeposition of HACC-rGO with chitosan was carried out according to the previously reported coordination deposition method [13]. A copper plate (or a copper wire) was used as the anodic electrode, and a platinum foil served as the cathodic electrode. Before use, both electrodes were carefully polished, and then ultrasonically washed in acetone, ethanol and distilled water for 10 min each. Then, the electrodeposition was conducted using a programmable DC power supply (IT6123, TW). Both the cathode and the anode were partially immersed into the deposition solution, and then a DC voltage of 1.2 V was applied. After a given electrodeposition time (e.g., 9 min), the anode was disconnected from the power supply, and removed from the deposition solution, then rinsed with distilled water. Finally, the deposited HACC-rGO/CS film on the copper electrode was obtained.

Furthermore, the deposited HACC-rGO/CS films with different shapes were fabricated on titanium plates. Briefly, a titanium plate was coated with an alcohol-soluble ink (mainly composed of polyvinyl butyral resin) at the desired region as the protective coating, and then it was electroplated with copper at the desired region by the previously reported method [13]. Subsequently, the copper-plated titanium plate was used as the anode and a platinum foil was used as the cathode. The electrodeposition was then performed in the deposition solution according to the above-mentioned method, and finally, the deposited HACC-rGO/CS film with the desired shape was achieved on the titanium plate after the electrodeposition.

The X-ray diffraction pattern of the HACC-rGO powder and the deposited HACC-rGO/CS film were performed on an X-ray diffractometer (D/MX-IIIA, Rigaku, JP). The flake size of the HACC-rGO material was observed using a field emission scanning electron microscope (JSM-5610LV, JEOL Ltd., Japan). The Raman spectrum of the HACC-rGO sample was measured using a Raman spectrometer (INVIA, Renishaw, UK) with an excitation wavelength of 633 nm. The surface and the cross-section morphology of the deposited HACC-rGO/CS film were observed by a field emission scanning electron microscope (JSM-5610LV, JEOL Ltd., JP). The tensile strength and elongation at break of the deposited HACC-rGO/CS film were tested by a universal testing machine (CMT6503, Shenzhen SANS Test Machine Co., China). The area of the film for the test was 30 × 10 mm, and the cross-head speed was 10 mm/min. Each final measurement was obtained from the average value of five samples. The thermogravimetric analysis of the sample was performed using a thermogravimetric analyzer (STA449c/3/G, Netzsch, Germany) with a heating rate of 10 °C/min under nitrogen atmosphere.

© 2018 Liu et al.; licensee Beilstein-Institut.
This is an Open Access article under the terms of the Creative Commons Attribution License (http://creativecommons.org/licenses/by/4.0), which permits unrestricted use, distribution, and reproduction in any medium, provided the original work is properly cited.
The license is subject to the Beilstein Journal of Nanotechnology terms and conditions: (https://www.beilstein-journals.org/bjnano) 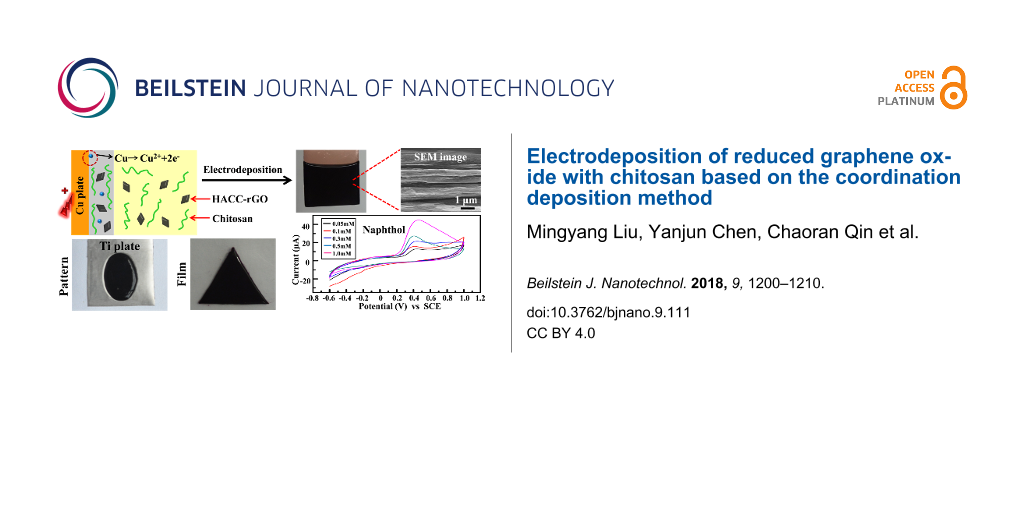