All articles from this author
Dao-Xin Yao


All articles from this author
Zhi Wang

Background: A Majorana bound state is a superconducting quasiparticle that is the superposition of particle and hole with equal amplitude. We propose a verification of this amplitude equality by analyzing the spatial Rabi oscillations of the quantum states of a quantum dot that is tunneling-coupled to the Majorana bound states.

where ε is the excitation energy for the single energy level of the quantum dot and d† represents the creation operator on the energy level.

The Majorana island consists of a one-dimensional topological superconductor such as a nanowire–superconductor hybrid structure and a ferromagnetic chain, with zero-energy Majorana bound states at the ends of the system. The wave functions of the two Majorana bound states overlap with each other, inducing an energy splitting that exponentially decays as the length of the island increases. The low-energy physics of the island can be described by an effective Hamiltonian [2,3],

We write out the matrix form for the total Hamiltonian HM = Hd + Hδ + HT. We first define a new fermionic operator f† = (γM − iγM′)/2, which leads to

Then we take the four eigenstates of the fermionic operators

as the basis states of the Hilbert space, and express the Hamiltonian in this basis explicitly,

This matrix is block diagonal due to the parity conservation of the total system. We notice that the upper left and the lower right 2 × 2 blocks have the same off-diagonal elements but different diagonal elements.

Now we consider the scenario that the nanowire island has an Andreev bound state at the end instead of Majorana bound states. From the mean-field Bogoliubov–de Gennes approach, the general form for Andreev bound states is the quantum superposition of electron and hole wave function, which in the second quantization form writes as,

where c†(r) is the creation operator for the electron, μ and ν are the electron and hole wave functions. For the sake simplicity they are real numbers and the factor of 1/2 for describing superconducting quasiparticles is absorbed into μ and ν. We assume the simplest wave function of delta equations since the Andreev bound state is extremely localized at the end of the wire. Then the Andreev operators can be written as

with δ = δ′(|μ|2 − |ν|2). Due to the particle–hole symmetry of the superconducting system, we can always obtain another Andreev bound state by defining a new operator

. This leads to the excitation energy −δ, which accounts for the negative energy excitations observed in experiments [17,37]. The tunneling Hamiltonian between the Andreev bound state and the quantum dot is,

where we define Tμ = μT and Tν = νT. Now we can establish a basis for HA with eigenstates

, and rewrite in the matrix form,

It looks similar to Equation 5 but with one critical difference: The off-diagonal terms in the upper left block and the lower right block are now different because they contain electron and hole wave functions, which are different for Andreev bound states. We note that the Andreev bound state may have equivalent particle and hole components (u↑ = v↑) for some spin directions. For this case, the matrices in Equation 5 and Equation 9 are identical if the energy level of the quantum dot is in the same direction. However, the spin direction of the quantum level on the dot can be reversed by inverting the Zeeman field. Then the matrix for the Andreev bound state contains the electron and hole wave functions in the reverse spin direction and must be different.

Now we are ready to consider the spacial Rabi oscillations where an electron oscillates between the quantum dot and the bound states. For this purpose we solve the Schrödinger equation

. The Hamiltonian is periodic in time, therefore the equation is not exactly solvable. To obtain the Rabi oscillations, we need to study the transition probability from one state to the other under this time periodic Hamiltonian. We take advantage of the Floquet theory, which states that the solution of the Schrödinger equation for any time-periodic Hamiltonian must satisfy Ψ(t) = ψ(t) e−iDt, with ψ(t) = ψ(t + (2π/ω) a time-periodic function that has a Fourier transformation

. Let us first consider the scenario of Majorana bound states where we can obtain a series of secular equations by inserting the ansatz solution back into the Schrödinger equation,

where l = 0, ±1, and the Fourier transformed components of the Hamiltonian Hl are

with α,β = 0, 1, 2, 3. Then, the secular equations can be viewed as the eigenproblem for the infinite dimensional Floquet Hamiltonian [40],

In this Floquet formalism, the transition probability between any two states is written as

which could be calculated once we solve the eigenproblem for the Floquet Hamiltonian.

In the Floquet Hamiltonian, the off-diagonal elements are between the nearest blocks. For the zero-order perturbation, we first consider the transition between

which of course can be divided into two relevant 2 × 2 matrices,

We can also include the second-order perturbation, which slightly alters the diagonal elements of the 2 × 2 matrix,

Now the transition probability is clear. Starting from an initial state

we would have a Rabi oscillation for

Clearly, there are Rabi oscillations at with two resonant driving energies at

However, for both resonant driving energies, the Rabi frequency is the same ωr = ωr′ = T1. This is not a coincidence, but is a result of the self-conjugateness of the Majorana bound states.

Now we consider the scenario of Andreev bound states. With the same Floquet approach, we can obtain the effective Floquet Hamiltonians,

when we set T0 = 0. Clearly, we also have two resonant driving energies. However, now we have different Rabi frequencies for these two resonant driving energies, ωr = νT1 and −ωr′ = μT1, which are given by solving the Floquet Hamiltonians in Equation 19. The difference between the Rabi frequencies comes from different particle and hole wave functions, μ and ν, for the Andreev bound states.

where ε1,2 are the energy for quantum dot levels, and

are the creation operators on the quantum dot levels.

where T1,2 are the tunneling strength between the left and the right pair of quantum dot and Majorana bound state in the form of T1,2 = 2T′1,2cosω1,2t. We can explicitly write down the total Hamiltonian in the matrix form by defining basis functions

is the vacuum state. We arrive at an 8 × 8 matrix that is block diagonal because the total fermionic parity of the system is conserved. For simplify, we take the even total parity, and get a 4 × 4 matrix,

where i represents the left/right side of each operator with Tiμ = μTi, Tiν = νTi. For this case, the system can be divided into left and right segments, which are uncoupled from each other. For simplicity, we take the even parity of both sides, where the basis states are chosen as

. Then the Hamiltonian can be reformed to a four by four matrix:

We find that this matrix is very similar to the matrix of quantum dots and Majorana bound states. However, there is the key distinction that the left quantum dot and the right quantum dot should be entirely uncoupled. We note that this matrix is different from the one shown in Equation 22 even if μ = ν, since the two Andreev bound states correspond to two superconducting quasiparticles with a 4 × 4 Hilbert subspace, while the two Majorana bound states gives a single superconducting quasiparticle with a 2 × 2 Hilbert subspace.

© 2018 Zheng et al.; licensee Beilstein-Institut.
This is an Open Access article under the terms of the Creative Commons Attribution License (http://creativecommons.org/licenses/by/4.0), which permits unrestricted use, distribution, and reproduction in any medium, provided the original work is properly cited.
The license is subject to the Beilstein Journal of Nanotechnology terms and conditions: (https://www.beilstein-journals.org/bjnano) 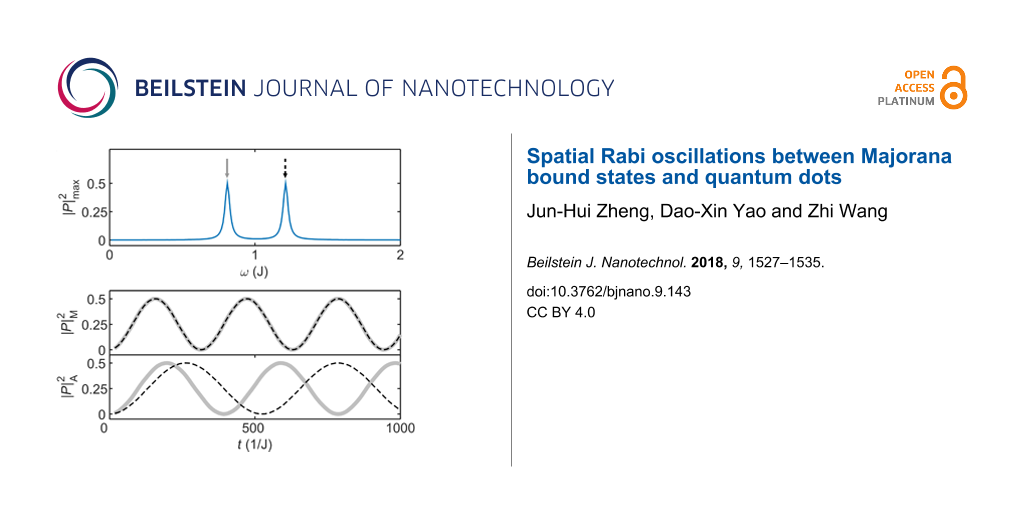