To relate the internal structure of a volume (crystallite and phase boundaries) to properties (electrical, magnetic, mechanical, thermal), a full 3D reconstruction in combination with in situ testing is desirable. In situ testing allows the crystallographic changes in a material to be followed by tracking and comparing the individual crystals and phases. Standard transmission electron microscopy (TEM) delivers a projection image through the 3D volume of an electron-transparent TEM sample lamella. Only with the help of a dedicated TEM tomography sample holder is an accurate 3D reconstruction of the TEM lamella currently possible. 2D crystal orientation mapping has become a standard method for crystal orientation and phase determination while 3D crystal orientation mapping have been reported only a few times. The combination of in situ testing with 3D crystal orientation mapping remains a challenge in terms of stability and accuracy. Here, we outline a method to 3D reconstruct the crystal orientation from a superimposed diffraction pattern of overlapping crystals without sample tilt. Avoiding the typically required tilt series for 3D reconstruction enables not only faster in situ tests but also opens the possibility for more stable and more accurate in situ mechanical testing. The approach laid out here should serve as an inspiration for further research and does not make a claim to be complete.

For the study of nanostructured material with feature sizes <100 nm, transmission electron microscopy (TEM) is the method of choice due to its high spatial resolution [1-4]. Even though the electron-transparent TEM specimen lamellas are often only a few tens of nanometers thick, overlapping structures, such as crystallites of different orientations and phases, are unavoidable and typically unwanted. Nevertheless, in some cases it is even desirable to have overlapping crystallites to reduce the influence of the free surface and to increase the interaction between crystallites to represent bulk behavior, especially related to in situ studies (e.g., tensile or thermal testing) inside the TEM [2,5-9]. However, the 2D projection of a 3D volume with overlapping structures results in an incomplete picture, which can lead to misinterpretation. Hence, a full 3D reconstruction is desirable to relate the internal structure of a volume (crystallite and phase boundaries) to properties (electrical, magnetic, mechanical, thermal). 3D reconstructions using X-ray diffraction (XRD) [10-13], electron back scatter diffraction (EBSD) [14-17] and TEM have been presented [18-21]. However, only TEM has the spatial resolution to resolve the smallest structures of nanocrystalline material [1-4,15,22,23]. While 3D-EBSD uses volume slicing and imaging [15-17,24], XRD- and TEM-tomography require a sample tilt series for the 3D reconstruction [10,11,20,25,26].

The combination of in situ testing with 3D crystal orientation mapping remains a challenge in terms of stability and accuracy. Avoiding sample tilting for the 3D reconstruction would enable much faster mapping of nanomaterials in situ inside the TEM. Further, more stable and more accurate in situ mechanical testing would be possible.

In the following, a pathway towards 3D reconstruction from 2D crystal orientation maps is described and first results presented.

The starting point for the 3D reconstruction is an ACOM map containing experimental spot diffraction patterns originating from a Pd thin film deposited by radio frequency (RF) magnetron sputtering. The orientation map was acquired on a Philips Tecnai F20 ST TEM instrument which was equipped with a NanoMegas ASTAR system in combination with a Topspin (Appfive) software. A detailed description of the sample preparation and data acquisition can be found in [34]. For these preliminary results, only a few pixels of the whole crystal orientation map were analyzed as the analysis is not integrated into the template matching program ASTAR (NanoMegas) and had to be performed manually.

Based on the mean intensities, the thickness ratio of the contributing crystal orientation in projection is derived as follows.

We use the simplified assumption of linear scattering, neglecting dynamic effects:

We define a theoretical scattering ratio (SR) of the intensities from two crystal orientations with the same thickness d:

The diffraction intensities Ii should be calculated using a proper kinematic diffraction simulation. Here, we approximate the scattering strength Ki of the contributing crystal orientations by the mean area (mAi) of the RSDP disks (area of disks divided by the number of disks), which is derived from template matching (ASTAR).

For overlapping crystallites with unknown thicknesses di and the local thickness dtot in projection the intensity ratio rI is:

which is equivalent to the experimental intensity ratio of the mean intensities mIi. Considering the aforementioned approximation, this results in the thickness di:

This thickness calculation was done for all markers of Figure 1f setting the total thickness dtot to 1 to receive a relative ratio. Comparing the intensities of the diffracted beams with the primary beam, an absolute thickness could be calculated. Figure 1f is a virtual bright field (VBF) image reconstructed by placing a virtual aperture in the diffraction pattern. To compare the orientation contribution of each pixel to the cross-correlation indices for both contributing twin crystallites and to their reliability (ratio of cross-correlation indices for the tested orientations), all three measures are plotted versus the distance (Figure 1g). The distance is measured from the left green marker in Figure 1f to all others, normal to the twin boundary.

Although all three curves follow similar trends (apart from being flipped upside down, as blue cross-correlation index and reliability), it was shown that the cross-correlation indices and reliability values cannot be used as a measure for the thickness ratio [34]. To illustrate this, Figure 1e shows two halves of a crystal orientation map of the same area but evaluated with two different filter settings. The two twin crystallites of the grain, marked in Figure 1f, appear completely different dependent on the filter settings.

Starting from 40 nm in the graph (Figure 1g) the thickness ratio is 0% green, increasing linearly until about 60 nm. The same applies for 95–80 nm, where the thickness ratio linearly increases. Based on the ratio plateau from 60–80 nm alone, there would be two overlapping twin crystallites (a case such as that in Figure 2a). However, the contributing crystallites are twins with defined, mainly straight and symmetric crystal plane relations. Deviations of a linear thickness ratio can result from multiple overlapping and inclined twins as presented in the inset of Figure 1f. The slope of the twin boundary was assumed from the thickness-ratio trend between 80 and 95 nm (Figure 1g).

What other hurdles need to be considered? The comparison of the intensity ratio from the superimposed experimental diffraction pattern with the area ratio of the corresponding simulated diffraction pattern (Equation 4) was the easiest approach, but not necessarily the best. Experimental intensities should be compared with simulated intensities and the areas are only an indirect measure of the intensities, which were easy to access with the NanoMegas software ASTAR. A full integration of the simulation would be possible, but was beyond the scope of this paper.

To summarize, the superimposed diffraction pattern from overlapping twin crystallites was used to reconstruct the 3D volume. The simple approach, laid out here, showed that the diffraction pattern contain the necessary information for the 3D reconstruction. This is in contrast to the Kikuchi pattern, which is determined mainly by the exit planes of the lattice, and hence does not provide enough information for a reconstruction [22,41,42]. Smart reconstruction algorithms are necessary and novel direct electron detection cameras in combination with advanced scanning optics can support the development towards 3D reconstruction from 2D projection images. This paper should inspire further research in this direction with the aim of using the 3D reconstruction in an in situ test series inside the TEM to receive a more complete picture of the material and to relate the material properties to structural changes.

© 2018 Kobler and Kübel; licensee Beilstein-Institut.
This is an Open Access article under the terms of the Creative Commons Attribution License (http://creativecommons.org/licenses/by/4.0), which permits unrestricted use, distribution, and reproduction in any medium, provided the original work is properly cited.
The license is subject to the Beilstein Journal of Nanotechnology terms and conditions: (https://www.beilstein-journals.org/bjnano) 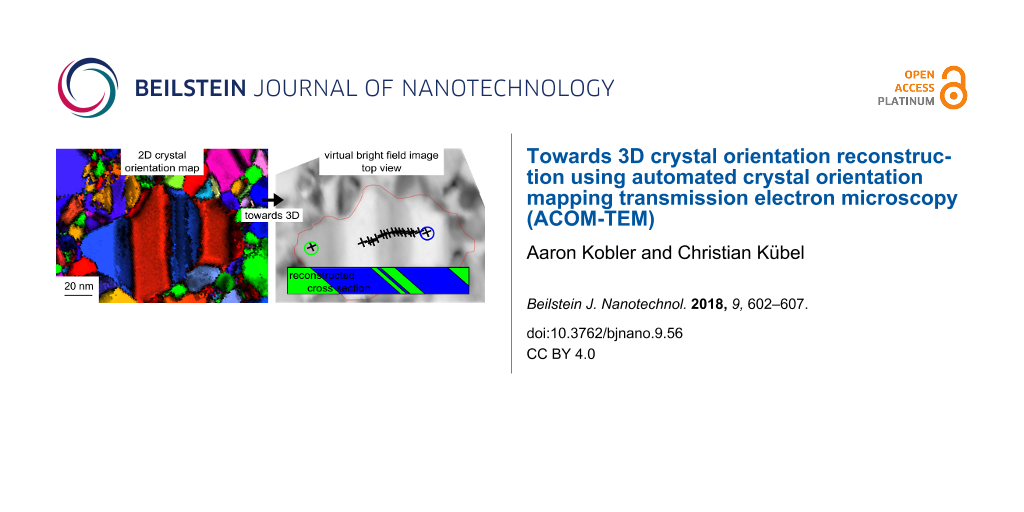