All articles from this author
Min-Yi Li


All articles from this author
Jun Wu


All articles from this author
Gerhard Bringmann

Decandrinin (1), an unprecedented C9-spiro-fused 7,8-seco-ent-abietane, was obtained from the bark of an Indian mangrove, Ceriops decandra, collected in the estuary of Godavari, Andhra Pradesh. The constitution and the relative configuration of 1 were determined by HRMS (ESI) and extensive NMR investigations, and the absolute configuration by circular dichroism (CD) and optical-rotatory dispersion (ORD) spectroscopy in combination with quantum-chemical calculations. Decandrinin is the first 7,8-seco-ent-abietane.

Ceriops decandra is a mangrove of the family Rhizophoraceae. It is widely distributed along the sea coasts of South Asia down to the southern pacific islands, and of Africa and Madagascar. The genus Ceriops only consists of five mangrove plant species. Besides C. decandra, these are C. australis, C. pseudodecandra, C. tagal, and C. zippeliana [1-4]. In Indian traditional medicine, the bark of C. decandra have been used for the treatment of amoebiasis, diarrhea, hemorrhage, and malignant ulcers [5], making it rewarding to screen the bioactive compounds of this plant. Before our work, already 28 compounds had been isolated from C. decandra [6] (three pimaranes, four beyeranes, five kauranes, and 16 lupanes). Recently, some of us have reported on the isolation of eleven new diterpenes from this plant, named decandrins A–K [7], of which nine belong to the group of abietanes.

Decandrinin (1) was obtained as a colorless solid. Its molecular formula was established as C20H28O4 by HRMS (ESI) (m/z 333.2053, calcd for [M + H]+, 333.2060). From this formula, it was suggested that 1 has seven degrees of unsaturation, of which four could be ascribed to one carbon–carbon double bond, one lactone carbonyl group, and two ketone groups, according to its 1H and 13C NMR data (Table 1); the molecule should thus be tricyclic.

The NOE interactions for the two methyl groups at C-4 suggested that one methyl group is located at the same side as H-5, while the other one has the same orientation as Me-20. The NOEs between the two protons of the methylene at C-11 and Me-20 led to the conclusion that the carbonyl at C-8 is opposite to Me-20 (Figure 3). If the carbonyl at C-8 was oriented in the same direction as Me-20 these NOEs would not be observed because there would be several atoms between the concerned protons (Figure S9 in Supporting Information File 1). Therefore, the relative configuration of 1 was identified as shown in Figure 1.

The absolute configuration of 1 was assigned by CD and ORD spectroscopy in combination with quantum-chemical calculations. The conformational analysis of 1 by using RI-SCS-MP2/def2-TZVP//B97D/TZVP yielded six relevant conformers within the energetical range of 3 kcal/mol above the global minimum. For each of the six conformers thus identified, TDB2PLYP/def2-TZVP calculations were performed providing single UV and CD spectra, which were then summed up with Boltzmann weighting. The resulting averaged CD spectrum was corrected by a UV shift [26] of 13 nm and compared with the experimental CD curve (Figure 4). While the CD curve predicted for the 5R,9R,10S-configuration was nearly opposite to the one experimentally observed, the spectrum calculated for the 5S,9S,10R-enantiomer showed a good fitting with a moderate ΔESI value of 58% [27]. To further corroborate the assignment of the absolute configuration of 1, ORD calculations were performed using the PBE0/cc-pVDZ//B97D/TZVP method. The ORD calculated for the 5S,9S,10R-configuration in the non-resonant region matched with the one observed experimentally (Figure S10 in Supporting Information File 1). The good agreement of the experimental CD and ORD spectra with the ones calculated for the 5S,9S,10R-enantiomer revealed the absolute configuration of 1 to be as shown in Figure 4.

A plausible biogenetic precursor of decandrinin (1) might be the naturally more common β-diastereomer of 7,13-ent-abietadien-3-ol (2). Accordingly, its 3β-OH group would be oxidized to yield int A, whose C-9 would then be hydroxylated to afford int B. Oxidative cleavage at the ∆7,8 double bond of int B could yield int C. Finally, the lactonization of int C would give decandrinin (1) (Scheme 1).

As described previously [7] the bark of Ceriops decandra were collected in September 2009 in the estuary of Godavari, Andhra Pradesh, India. The identification of the plant was performed by one of the authors (T.S.). A voucher sample (No. CD-001) is maintained at the Marine Drugs Research Center, College of Pharmacy, Jinan University.

The B97D/TZVP [28,29] method was used to perform the conformational analysis of 1 with Gaussian 09 [30]. Single-point energy calculations at the RI-SCS-MP2/def2-TZVP [31,32] level and TDB2PLYP/def2-TZVP [33-35] calculations in combination with the COSMO solvation model with acetonitrile as a solvent and the chain-of-spheres approximations [35-37] were done using ORCA [38]. The optical rotatory dispersion (ORD) was calculated at the PBE0/cc-pVDZ [39,40] level using Gaussian 09. The Boltzmann weighting of single UV and CD spectra, UV shift, the determination of ΔESI values in the wavelength region between 190 nm and 380 nm (13 nm UV shift, σ = 0.22 eV), and the comparison of the calculated CD (σ = 0.22 eV) and ORD spectra with those observed experimentally were done with SpecDis 1.61 [41].

This work was financially supported by NSFC (31100258, 31170331, and 81125022), the Guangdong Key Science and Technology Special Project (2011A080403020), and the Special Financial Fund of Innovative Development of Marine Economic Demonstration Project (GD2012-D01-001). The authors thank Franziska Witterauf for the experimental CD and ORD measurements. F.Z.K. is grateful to the BEBUC Excellence Scholarship System and the Else-Kröner-Fresenius-Stiftung for the support of his master studies.

© 2014 Wang et al; licensee Beilstein-Institut.
This is an Open Access article under the terms of the Creative Commons Attribution License (http://creativecommons.org/licenses/by/2.0), which permits unrestricted use, distribution, and reproduction in any medium, provided the original work is properly cited.
The license is subject to the Beilstein Journal of Organic Chemistry terms and conditions: (http://www.beilstein-journals.org/bjoc) 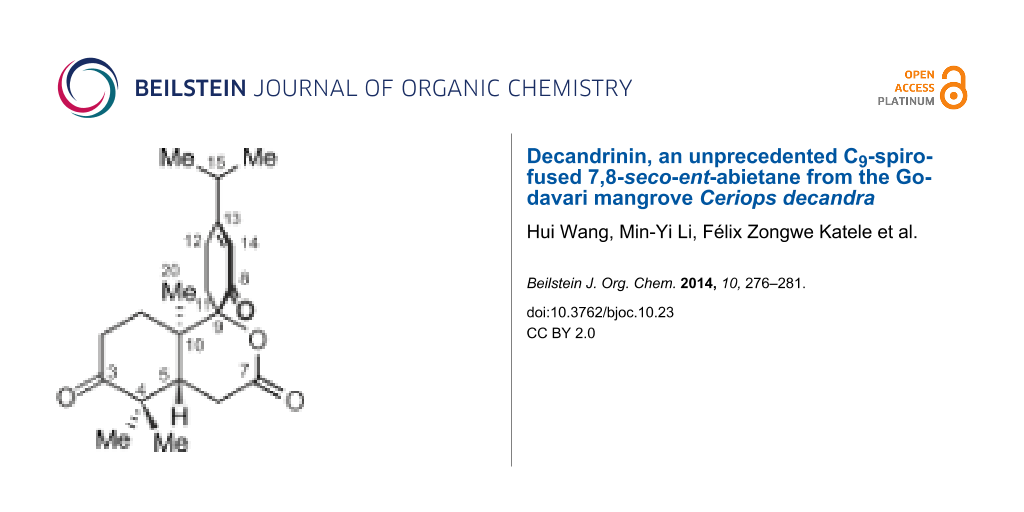