All articles from this author
Naoki Musya


All articles from this author
Tatsuya Morofuji


All articles from this author
Keiji Takeda


All articles from this author
Masahiro Takumi


All articles from this author
Akihiro Shimizu

This article is part of the Thematic Series "Electrosynthesis".

Dendrimer 4, having a bromo functionality was prepared on a multigram scale, as shown in Figure 2. Di(p-bromophenyl)carbinol (1) was treated with SOCl2 to obtain di(p-bromophenyl)methyl chloride (2) in quantitative yield. A Friedel–Crafts-type alkylation [29] of diphenylsilane 3 with 2 in the presence of boron trifluoride etherate as a Lewis acid gave 4 in 86% yield. The oxidation potential of 4 (Eox = 1.17 V vs SCE) is slightly lower than that of the fluorine analogue (Eox = 1.25 V vs SCE) which was used as a precursor of the dendritic cation in our previous work [25], indicating that bromine analogue 4 can act as a precursor of the dendritic cation.

The functionalization of 4 was examined before studying the functionalization of dendronized polystyrene. Thus, di(p-methoxyphenyl)amino groups were introduced to 4 using a Buchwald–Hartwig amination [11]. The choice of a base is crucial for this transformation, and the transformation was successfully carried out using Cs2CO3 as a base and Pd[P(t-Bu)3]2 as a catalyst [30] to obtain the dendrimer 5 having peripheral diarylamino groups in a yield of 77%. Compound 5 can serve as the precursor of dendritic diarylcarbenium ions having peripheral triarylamine structures. However, its redox potential (E1/2 = 0.79 V vs SCE) is much lower than the oxidation potential of dendrimer 4, indicating that the triarylamine moiety is oxidized before the benzylsilane moiety. Using the “graft to” approach to synthesize peripherally functionalized dendronized polystyrene (Figure 1b) employing 5 as a precursor of the dendritic carbocation was unsuccessful. Low-temperature electrochemical oxidation of dendrimer 5 using the “cation pool” method [31-47] did not give the corresponding dendritic diarylcarbenium ion even, when subjected to excess capacitance (up to 5.0 F/mol).

Next, we examined the “graft-from” approach (Figure 3). The low-temperature electrochemical oxidation of dendrimer 4 using the “cation pool” method was performed in CD2Cl2, and the resulting anodic solution was transferred to NMR tubes. Low-temperature NMR analysis indicated that an accumulation of dendritic diarylcarbenium ion 6 in the solution had occurred. The chemical shift of the cationic carbon (13C NMR δ 194.8) and that of the proton attached to the cationic carbon (1H NMR δ 9.93) indicated that there was no interaction between the cationic carbon and peripheral bromo groups, because the chemical shifts were almost identical to those of the fluorine analogue (13C NMR δ 194.4, 1H NMR δ 9.92) [25].

The reaction of 6 (generated on a preparative scale in CH2Cl2) with a low-molecular weight polystyrene 7a (Mn = 1,580, polydispersity index (PDI) = 1.04, 22 mg) was performed at 0 °C (Figure 3). The resulting dendronized polystyrene 8a was characterized using MALDI–TOF MS analysis. Six peak groups were observed, as shown in Figure 4. The peak occurring at 10,573 Da [M + Ag+] is derived from 11 dendritic substituents (815 Da × 11), 14 styrene units (103 Da × 11 + 104 Da × 3), and a butyl group (58 Da), which was derived from the initiator at the end of the polystyrene. The broader peaks seem to be attributable to two isotopes of the bromo groups (79 and 81 Da), and the small peak separation 101–103 Da is consistent with the molecular weight of styrene monomer (104 Da). The MS analysis indicated that 6 reacted with about 80% of the phenyl groups on polystyrene 7a. This ratio is consistent with the implemented rate (77%) calculated from the increase in weight of the polystyrene (22 mg to 150 mg).

The peripheral bromo groups of 8b were converted to diarylamino groups using a Hartwig–Buchwald amination employing Pd[P(t-Bu)3]2 (10 mol %) and Cs2CO3 (12 equiv) to obtain 9. Dendronized polystyrene 9 was also analyzed using GPC and SEC–MALLS measurements employing DMF as an eluent. The results are summarized in Table 1. GPC analysis indicated either a slight increase or no increase in molecular weight from the peripheral functionalization, but SEC–MALLS measurements showed an identifiable increase in the molecular weight (Mw = 62,000 to 226,000), which is more than double the theoretical value (Mw = 100,000 after 100% conversion of the peripheral bromo groups to diarylamino groups). Although the PDI did not change appreciably after dendronization (7b to 8b), the PDI increased slightly after peripheral functionalization (8b to 9). Presently, the ratio of methine protons in the focal points of the dendritic structure (δ 5.38–5.00, broad singlet, 3H) and the methyl protons of the peripheral methoxy groups (δ 3.80–3.40, broad singlet, 24H) in the 1H NMR spectra is the only evidence for the conversion of the peripheral bromo groups to diarylamino groups. The observed ratio was 1:8.4 (methane/methyl), which indicates a quantitative conversion (theoretical ratio is 1:8).

aPolymer 7b was analyzed only by GPC.

The redox behavior of 9 was studied by means of cyclic voltammetry (CV, Figure 5). Compound 9 showed two sets of reversible redox peaks (E1/2 = 0.80 and 1.04 V vs SCE), although it has been reported that di(p-methoxyphenyl)phenylamine shows a single redox peak in its CV curves [48]. Therefore, the two sets of redox peaks of 9 seem to be ascribable to the interaction of the initially formed radical cation from the triarylamine moiety with a neighboring neutral triarylamine moiety, which disfavors the second electron transfer from the latter, although the details of this reaction are not clear as yet [49,50]. This is consistent with the observation that dendrimer 10 prepared by desilylation of 5 followed by amination (see Supporting Information File 1 for preparative details) showed two reversible waves occurring at similar potentials (E1/2 = 0.81 and 1.10 V vs SCE) (Figure 5, blue line).

A film of dendronized polystyrene 9 was prepared on a Pt plate electrode as a film by drop casting of a CH2Cl2 solution of 9. The redox behavior of the film of 9 on a Pt electrode was analyzed using CV (Figure 5, red line). Reversible CV cycles (E1/2 = 0.76 and 1.01 V vs SCE) were obtained in a mixed solvent (CH3CN/toluene 1:3) using Bu4NB(C6F5)4 as the electrolyte. The small shifts in the redox peaks from those obtained from solution may be attributable to the changes in solvent and electrolyte. The peak separations for a film of 9 (ΔE (Eox – Ered) = 52 and 27 mV) are significantly smaller than those observed for a solution of 9 (ΔE = 103 and 87 mV), indicating immobilization of 9 occurred on the surface of the electrode.

The redox potentials (E1/2) of 5 and 10, and that of dendronized polystyrene 9 were measured by cyclic voltammetry (CV) using a GC working electrode (diameter = 3.0 mm, ALS Co. Ltd.) and a Pt wire counter electrode at room temperature. CH2Cl2 was used as a solvent and Bu4NBF4 (0.1 M) was used as a supporting electrolyte. The scan rate was 100 mV/s. The GC electrode was polished with alumina powder (0.05 μm) in water using a polishing pad, water-washed, and air-dried before use.

Cyclic voltammetry of a film of 9 deposited on a Pt plate electrode was measured as follows: Dendronized polystyrene 9 was deposited on a Pt plate electrode (1 × 1 cm2) as a film by drop casting of a CH2Cl2 solution of 9, and the solvent was evaporated under reduced pressure to obtain the film of 9 attached to the Pt plate. The CV measurement was performed using the Pt plate with the film of 9 as the working electrode and a Pt wire counter electrode at room temperature. A mixer of CH3CN/toluene (1:3) was used a solvent and Bu4NB(C6F5)4 (0.1 M) as a supporting electrolyte. The scan rate was 100 mV/s.

The authors gratefully acknowledge partial financial supports from Grants-in-Aid for Scientific Research on Innovative Areas (No. 2105) from the MEXT and Young Scientists (B) (No. 23750127) from the JSPS. T. N. thanks the Asahi Glass Foundation for financial support. The authors thank Prof. Mitsuo Sawamoto and Dr. Takaya Terashima of Kyoto University for SCE-MALLS measurements and Dr. Keiko Kuwata of Kyoto University for MS analyses.

© 2014 Nokami et al; licensee Beilstein-Institut.
This is an Open Access article under the terms of the Creative Commons Attribution License (http://creativecommons.org/licenses/by/2.0), which permits unrestricted use, distribution, and reproduction in any medium, provided the original work is properly cited.
The license is subject to the Beilstein Journal of Organic Chemistry terms and conditions: (http://www.beilstein-journals.org/bjoc) 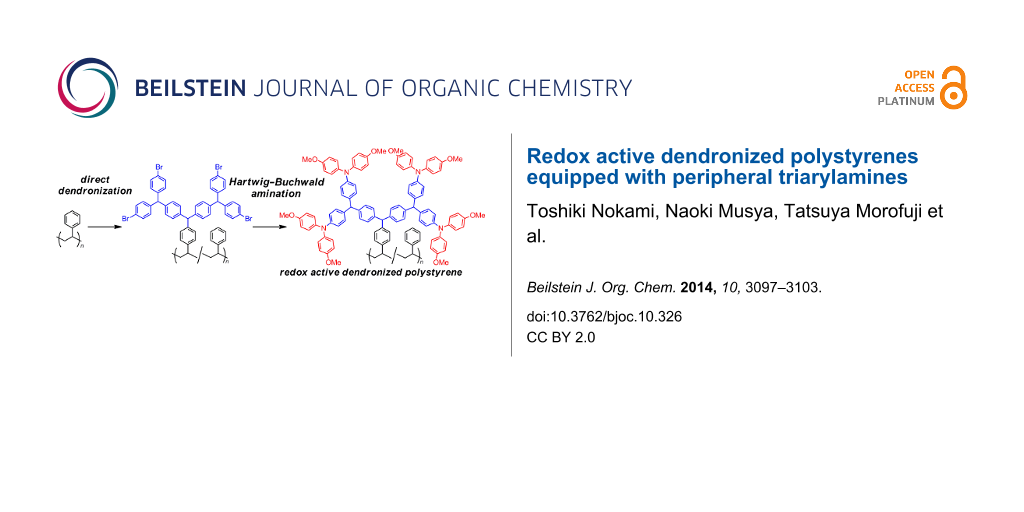