New sesquiterpene hydroquinones from the Caribbean sponge Aka coralliphagum


All articles from this author
Matthias Köck

Four new sulfated sesquiterpene hydroquinones siphonodictyals E1–E4 (1–4) and cyclosiphonodictyol A (5) were isolated from a sample of the Caribbean sponge Aka coralliphagum collected off the coast of San Salvador in the Bahamas. The structures of the new compounds were elucidated on the basis of mass spectrometric and NMR spectroscopic analysis. Compounds 1–4 are derivatives of siphonodictyal E (9). Siphonodictyal E4 (4) exhibited mild antiproliferation activity against L929 mouse fibroblast, KB-31 epidermoid carcinoma, and MCF-7 breast cancer cell lines, while siphondictyal E3 (3) and cyclosiphonodictyol A (5) showed moderate activity against Gram-positive bacteria.

Aka coralliphagum (Siphonodictyon coralliphagum) is known to have four distinct morphological forms: forma typica, f. tubulosa, f. obruta, and f. incrustans [1]. This sponge has the ability to burrow into live coral heads, leaving only the oscular chimney protruding (typica) or the flat crusts (incrustans) exposed. The oscular chimneys or the flat crusts are encircled by a so-called "dead zone" which protects the sponge from overgrowth [2]. Sullivan and Faulkner have proposed that the coral polyps are killed by the viscous mucus containing the toxic secondary metabolites which are produced by the sponge tissue [3]. This ecological observation inspired the chemical investigation of this sponge by different research groups. Thus many secondary metabolites have been reported, such as the sesquiterpene phenolic aldehydes, siphonodictyals B, C, D, E, the monosulfated siphonodictyols G and H, the disulfated siphonodictyal B3, and siphonodictyoic acid [2,4,5]. The sponge under our investigation is of the growth form incrustans, which was collected off the coast of San Salvador in the Bahamas. Fractionation of the aqueous n-BuOH extract yielded the new compounds siphonodictyals E1–E4 (1–4) and cyclosiphonodictyol A (5). In this article, we describe the isolation, structural elucidation, and bioactivity of compounds 1–5 from the Aka growth form incrustans, as well as discuss the biosynthetic pathway of related compounds.

The aqueous n-BuOH extract from Aka coralliphagum was subjected to solvent partitioning, followed by gel chromatography and reversed phase (C18) HPLC to yield siphonodictyals E1–E4 (1–4) and cyclosiphonodictyol A (5) (Figure 1). The structure elucidation was based on 1D and 2D NMR as well as HRMS-ESI(−) experiments. The 1H and 13C NMR chemical shifts for the five new compounds are given in Table 1.

aδ are given in ppm (reference: DMSO-d6, 2.50 ppm, 39.52 ppm), coupling constants are given in Hz; assignments were confirmed by 2D NMR experiments (COSY, HSQC, HMBC). bOverlap with water peak. cChemical shifts were obtained from HMBC spectra. dOverlap with each other.

The HRMS-ESI(−) spectrum for siphonodictyal E3 (3) displayed the pseudomolecular ion peak [M + Na − 2H]− at m/z 539.1046, indicating the molecular formula C22H30O10S2. The 13C NMR spectrum contained six olefinic signals in addition to the aromatic signals, and the 1H NMR spectrum contained four olefinic methyl signals at δ 1.62 (s), δ 1.54 (s), δ 1.55 (s), and δ 1.66 (s), which suggested a sesquiterpene side chain containing three trisubstituted olefinic bonds. The two sulfate ester groups were assigned to attach to C-18 and C-21 after comparison of the NMR data of the aromatic moieties of 3 with those of siphonodictyal B3 (8, Figure 2). Nevertheless, the results of the increment calculations using the values for sulfate esters from Ragan [8] clearly favours the isomer 3-I (Figure 5), which further supports our proposed structure.

The HRMS-ESI(−) spectrum for siphonodictyal E4 (4) showed the pseudomolecular ion peak [M + Na − 2H]− at m/z 555.0954, confirmed its molecular formula as C22H30O11S2, corresponding to eight double bond equivalents. The sesquiterpenoid moiety of the molecule contained two trisubstituted olefinic bonds (δ 121.7, δ 125.7, δ 131.9, δ 134.9) and a hemiacetal carbon (δ 96.2) at one terminus which differed from the acyclic side chain in 1 and 2. The remaining six carbon signals in the downfield region of the 13C NMR spectrum belonged to the tetrasubstituted aromatic ring system. In contrast to 1 and 2, compound 4 contained an oxymethine group (CH-22, δC 65.3, δH 4.44) which connected the sesquiterpene chain with the aromatic ring. This is supported by the six/seven HMBC correlations from H-22 to C-1 (δ 96.2), C-2 (δ 37.3), C-3 (δ 31.4), C-13 (δ 19.9), C-19 (δ 143.2) / C-21 (δ 142.9), and C-20 (δ 120.3). The HMBC correlations from H-12 (δ 2.58, 3.99) to C-17 (δ 120.8) and C-21 and from H-17 (δ 7.19) to C-18 (δ 137.2) confirmed the position of the unsubstituted CH-17 as shown in the proposed structure (Figure 6). Since the very weak HMBC correlation from H-1 to C-19 or C-21 could not be unambiguously assigned, the constitutional isomers with respect to the position of the oxygen bridge 4a and 4b (Figure 1) are in accordance with the NMR data. This is the first compound isolated from this sponge which contains a macrocycle. Moreover, this macrocycle could probably be formed by an aldol addition from a precursor with an acyclic sesquiterpene side chain (Figure 7). The aromatic ring system of proposed precursor 3-ox in Figure 7 also appeared in the known compound siphonodictyal B3 (8) [5] isolated from the same sponge source as well as the newly identified compound 3. There are no similar compounds known which contained the aromatic ring system with two adjacent sulfate ester groups. Therefore, we assumed that the constitutional isomer 4a is more likely. The δ values of methyl carbons C-14 and C-15 below 20 ppm indicated the E configuration of the double bonds C-6/C-7 and C-10/C-11 of the isoprenoid chain [6,7]. Additionally, in the NOESY spectrum we could observe a weak correlation between H-22 (δ 4.44) and H-3 (δ 1.03) as well as between H-22 (δ 4.44) and H-13 (δ 1.04). Because of the overlapping of the proton signals of H-3 and H-13, this assignment is not unambiguous. Due to the flexibility of the macrocycle of 4 it was not possible to analyse the conformation of the pyrane. Therefore, the configurations at the centers C-1, C-2, and C-22 could not be assigned. Further investigations are hindered by the fact that compound 4 easily degrades.

The new compounds were tested for antimicrobial activity against different Gram-positive and Gram-negative bacteria, fungi, and for antiproliferative activity. The results given in Table 4 show that siphonodictyal E3 (3) and cyclosiphonodictyol A (5) exhibited mild activity against the Gram-positive bacteria Staphylococcus aureus and Micrococcus luteus, while siphonodictyal E4 (4) show cytotoxic activity against the L929 mouse fibroblasts, KB-31 epidermoid carcinoma, and the breast cancer cell line MCF7, although none of them showed activity in the antimicrobial assays against Gram-negative bacteria and the fungus Candida albicans.

Aromatic sulfates occur in a wide range of higher plants and animals, particularly those growing in marine, estuarine, or freshwater environments. This is probably due to the high content of inorganic sulfate in aquatic environments (both limnic and marine environments – seawater contains an average of 28.7 mM inorganic sulfate [12]). Jensen and Ragan have demonstrated the presence of the natural product 1,2,3,5-tetrahydroxybenzene-2,5-disulfate in the marine brown alga Ascophyllum nodosum [13]. Kobayashi et al. isolated halenaquinol sulfate from the marine sponge Xestospongia sapra [14].

In the course of our investigation on the sponge Aka coralliphagum, we isolated a number of compounds containing sulfated phenols. These sulfated metabolites are labile [5], and easily loose the sulfate ester groups by hydrolysis in water [15]. Moreover, the influence of the sulfate esters on the bioactivity has been proven by activity tests: the desulfated compounds tend to be more active [5]. Therefore, we propose that the sulfate esters act as hydroxy protecting groups. The sponges excrete the sesquiterpene hydroquinones primarily in the sulfated form and their activities get increased by hydrolysis of these labile groups. This would lead to a prolonged bioactivity of these metabolites and therefore to a more efficient defense against predators or pathogens.

1H and 13C NMR spectra were recorded on a Bruker Avance 600 MHz NMR spectrometer equipped with a cryo platform and a Bruker Avance 400 MHz NMR spectrometer. All experiments were measured at 303 K. HPLC separation was achieved by a Kromasil RP-18 column (16 mm × 250 mm, 5 µm) applying a H2O (5 mM NH4OAc)/MeCN/MeOH gradient. UV spectra were recorded during HPLC separation with a DAD detector (Jasco MD-2010 Plus). Accurate mass spectra were acquired using a Bruker micrOTOFLC mass spectrometer equipped with an ESI source. Mass calibration was performed using a sodium formate cluster prior each experiment.

Determination of antimicrobial activities was carried out by the Helmholtz Center for Infection Research (HZI), and was based on the microdilution test, using 96-well micro titration plates. The MIC was defined as 50% growth inhibition after 24 hour incubation compared to that in the growth control well.

Financial support from the Deutsche Forschungsgemeinschaft (DFG) under grants Ko 1314/5-1 and 5-2 (DFG research unit FOR 934) is gratefully acknowledged. Sponge collection was carried out by Dr. Gesine Schmidt and Dr. Achim Grube during a scientific expedition to the Bahamas in 2008. We would like to acknowledge the support of Prof. Dr. Joseph R. Pawlik (University of North Carolina, Wilmington, USA) who gave members of the Köck research group the opportunity to participate in the research trips to the Bahamas for the time period from 1998 to 2008. We further thank Dr. Sven Zea (Universidad Nacional de Colombia) for identification of the sponge samples as well as Dr. Florenz Sasse and Dr. Galina Sergeev (HZI Braunschweig) for carrying out the bioassays.

© 2014 Göthel and Köck; licensee Beilstein-Institut.
This is an Open Access article under the terms of the Creative Commons Attribution License (http://creativecommons.org/licenses/by/2.0), which permits unrestricted use, distribution, and reproduction in any medium, provided the original work is properly cited.
The license is subject to the Beilstein Journal of Organic Chemistry terms and conditions: (http://www.beilstein-journals.org/bjoc) 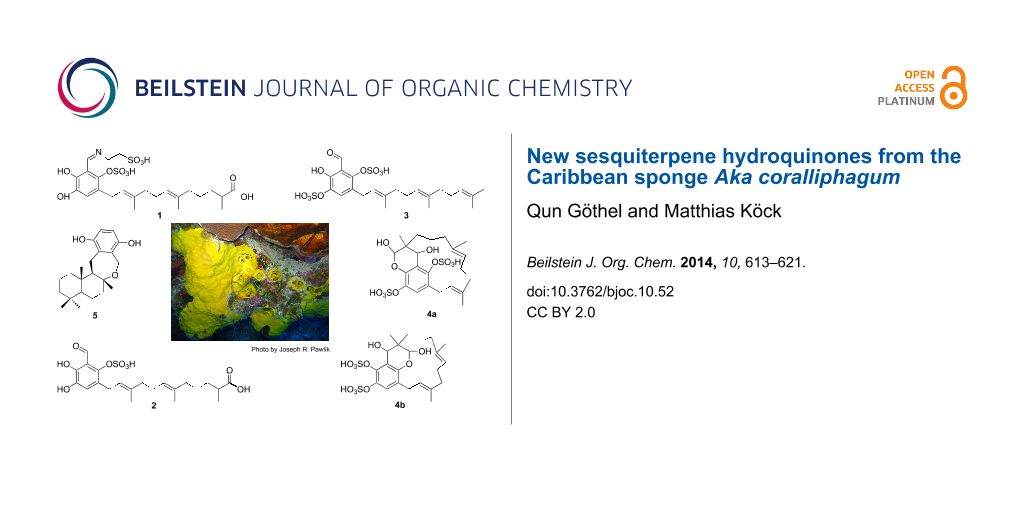