Here, we describe a new and simple synthetic strategy to various polycyclic sulfones via Diels–Alder reaction and ring-rearrangement metathesis (RRM) as the key steps. This approach delivers tri- and tetracyclic sulfones with six (n = 1), seven (n = 2) or eight-membered (n = 3) fused-ring systems containing trans-ring junctions unlike the conventional all cis-ring junctions generally obtained during the RRM sequence. Interestingly the starting materials used are simple and commercially available.

Sulfones [1-8] are popular building blocks [9] in organic synthesis. They are also useful substrates for the Ramberg–Bäcklund reaction [10] and they can be alkylated via carbanion chemistry. Moreover, they are suitable synthons in Diels–Alder (DA) reactions [11-14]. In view of various applications of sulfone derivatives, we envisioned a new synthetic strategy based on ring-rearrangement metathesis (RRM) as a key step. It is worth mentioning that the RRM strategy [15-23] with a variety of substrates affords intricate products that are inaccessible by conventional retrosynthetic routes. Several bicyclo[2.2.1]heptane systems [24-26] are known to undergo RRM. However, in almost all instances the products produced are cis-configured at the ring junctions. The main driving force for the RRM of these systems is the release of ring strain. The configuration is transferred from the starting material to the product. In connection with our interest to design new polycycles by RRM [27,28] as a key step, here we conceive unique examples where cis and trans ring junctions are produced in the RRM reactions.

Our retrosynthetic strategy to diverse sulfone derivatives is shown in Figure 1. The target sulfone derivatives 1 could be synthesized from the functionalized tricyclic sulfone 2 by RRM sequence. The sulfone 2 may be prepared from the dimesylate 3, which in turn, can be assembled from the known anhydride 4 via reduction followed by mesylation of the resulting diol. Compound 4 could be prepared via DA reaction starting with freshly cracked cyclopentadiene and maleic anhydride (Figure 1).

To realize the strategy shown in Figure 1, we started with the preparation of the known compound 4 [29,30]. Later, the DA adduct 4 was reduced with LiAlH4 to deliver the corresponding diol (95%) [31], which was subsequently treated with methanesulfonyl chloride in the presence of triethylamine as a base to obtain the dimesylate 3 (89%). Next, compound 3 was subjected to a cyclization reaction by treating with sodium sulfide nonahydrate (Na2S·9H2O) using 20% Aliquat® 336 as a phase–transfer catalyst (PTC) to produce the known sulfide 5 (83%) [31].

Having the sulfide 5 in hand, our next task was to prepare sulfone 6. In this regard, Trost and Curran [32] have reported the conversion of sulfides to sulfones in the presence of other common functional groups such as olefins by reacting with the oxidizing agent, potassium hydrogen persulfate (KHSO5, commercially available as Oxone®) in aqueous methanol. Equipped with this information, oxidation of compound 5 was attempted under similar reaction conditions to get the desired sulfone 6 [33] (Scheme 1, Table 1).

Similarly, we synthesized the hexenyl sulfone derivatives 8d and 2d by treating compound 6 with 6-bromo-1-hexene using HMPA and n-BuLi at −78 °C. The desired dihexenylated sulfone 2d has been furnished in 75% yield along with monohexenyl sulfone derivative 8d (9%, Table 2, entry 4). Based on these optimization studies, it was concluded that it is necessary to use the appropriate number of equivalents of the alkenyl bromide and the suitable base to generate the dialkenylated products (Table 2 and Scheme 2).

After the successful synthesis of various dialkenyl sulfone derivatives 2a–d, we focussed our attention towards the RRM step. Initially, the diallyl sulfone 2a (~0.0141 M solution in dry CH2Cl2) was subjected to RRM using G-I catalyst in the presence of ethylene gas in refluxing CH2Cl2 to get the tetracyclic sulfone 1a, however, we isolated the tricyclic sulfone 10 in 48% yield. When the G-I catalyst was replaced with G-II a complex mixture of products was observed as indicated by 1H and 13C NMR spectral data. Later, compound 10 was treated with conventional Grubbs catalysts under different reaction conditions (Table 3) to obtain the RRM product 1a (Scheme 3). Unfortunately, the expected compound 1a was not obtained. The strain present in the trans-fused compound 1a may be responsible for its absence in the RRM sequence.

Interestingly, dibutenyl sulfone 2b (~0.0034 M solution in toluene) smoothly underwent RRM with Grubbs 2nd generation (G-II) catalyst in the presence of ethylene in refluxing toluene to produce the anticipated tetracyclic sulfone 1b (97%) (Scheme 4). The sulfone 1b has been characterized by 1H and 13C NMR and DEPT-135 spectral data including HRMS data.

Next, the RRM of dipentenyl sulfone 2c (~0.0031 M solution in toluene) was carried out under similar reaction conditions to furnish 1c. Interestingly, the tricyclic sulfone 11 was isolated in 60% along with the expected tetracyclic sulfone 1c (32%) and a minor amount of ring-opened product 12 (6%, Scheme 5). A complex mixture of products was obtained when compound 2c was exposed to the metathesis catalyst for a longer period of time as indicated by 1H and 13C NMR spectral data.

Analogously, dihexenyl sulfone 2d (~0.0024 M solution in toluene) was treated with G-II catalyst to deliver the RRM product in the presence of ethylene in refluxing toluene. In this regard, only ring-opened sulfone 13 was produced in 88% yield (Scheme 6) and no cyclized product was observed. Presumably, this observation may be explained on the basis that the nine-membered ring product was not formed due to the unfavourable steric interactions involved.

Several interesting polycyclic sulfone derivatives were designed and assembled involving RRM. The RRM outcome of various sulfones (2a–d) depends on the length of the alkenyl chain. In this context, the dibutenyl sulfone derivative 2b is the most-promising candidate for the RRM protocol. In other instances, for example with propenyl analogue 2a the partial ring-closing product 10 was obtained. With substrate 2c, the eight-membered RRM compound 1c was formed as a minor product and partial ring-closing compound 11 as a major product. With substrate 2d, only ring-opened product 13 was produced. Interestingly, we demonstrated trans-ring junction products are possible in the RRM protocol. It is clear that RRM has a unique place in olefin metathesis [38-45] and further interesting examples are expected in future.

© 2015 Kotha and Gunta; licensee Beilstein-Institut.
This is an Open Access article under the terms of the Creative Commons Attribution License (http://creativecommons.org/licenses/by/2.0), which permits unrestricted use, distribution, and reproduction in any medium, provided the original work is properly cited.
The license is subject to the Beilstein Journal of Organic Chemistry terms and conditions: (http://www.beilstein-journals.org/bjoc) 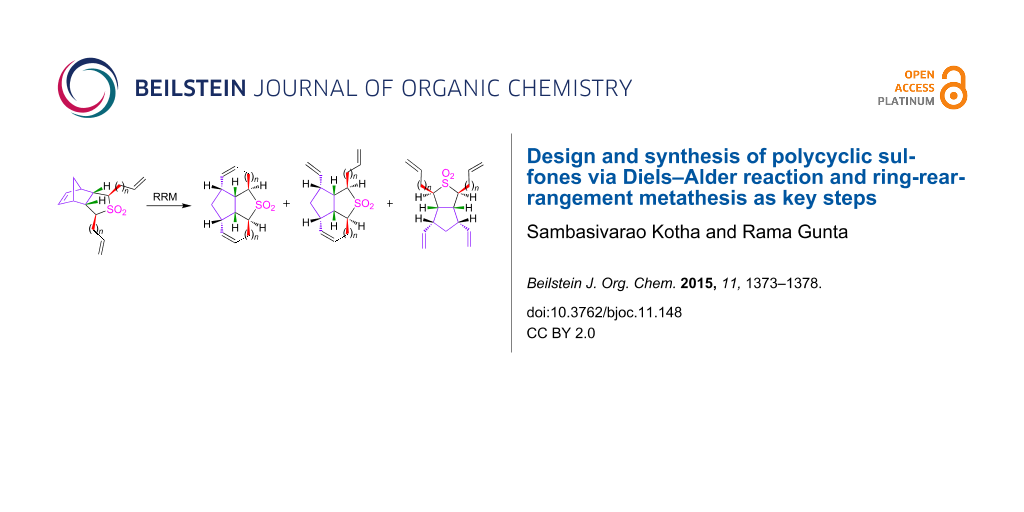