Various intricate propellane derivatives and oxa-bowls have been synthesized via a ring-rearrangement metathesis (RRM) as a key step starting from readily accessible starting materials such as p-benzoquinone, 1,4-naphthoquinone and 1,4-anthraquinone.

The synthesis of complex target structures requires bond-disconnection analysis of the target molecule, eventually to arrive at simple starting materials by working in an opposite direction to a chemical synthesis. The ‘retrosynthetic analysis’ was first introduced by E. J. Corey and defined as “it is a problem solving technique for transforming the structure of a synthetic target molecule to a sequence of progressively simpler structures along a pathway which ultimately leads to a simple or commercially available starting materials for a chemical synthesis” [1] . Generally, this type of retrosynthetic analysis has been used to design [2-6] the target molecule. However, a “transformation-based” retrosynthetic approach is rarely used. In the transformation-based strategy the target and precursor compounds are related by a rearrangement as the key transformation. The advantages of the rearrangement-based strategy are: the target molecule can be assembled from less obvious and more accessible precursors. Several C–C bonds are formed in a simple manner by taking advantage of the key rearrangement and the overall synthetic economy of the process can be enhanced. One can design unprecedented synthetic routes to complex targets [7] through the rearrangement-based approach. In this regard, the ring-rearrangement metathesis (RRM) [8-12] is useful and moreover, the stereochemical information can be transferred from the starting material to the final product during the RRM. In continuation of our interest to design novel molecules via metathesis [13-20] we conceived a new and simple route to propellane derivatives and oxa-bowls [21-26]. This strategy starts from simple starting materials and involves a Diels–Alder (DA) reaction [27,28] and RRM as the key steps.

The retrosynthetic strategy to diverse propellane derivatives and oxa-bowls is shown in Figure 1. Oxa-bowl 1 can be synthesized from the tetracyclic compound 2 using RRM, which could be obtained from the known DA adduct 3 by O-allylation. On the other hand, the propellane derivative 7 may be synthesized from the tetraallyl compound 6 by a RRM sequence. Further, the tetraallyl compound 6 can be assembled from the C-allyl derivative 4 via reduction followed by O-allylation. The C-allyl derivative 4 may be obtained from the known DA adduct 3 by a C-allylation sequence which in turn could be prepared by the DA reaction of the corresponding 1,4-quinones (p-benzoquinone, 1,4-naphthoquinone or 1,4-anthraquinone) with a freshly cracked cyclopentadiene.

To realize the synthetic strategy (Figure 1) to various propellane derivatives [29-31] and oxa-bowls, we commenced with the preparation of a known DA adduct 3a [32]. Subsequent allylation of 3a with allyl bromide in the presence of NaH delivered the aromatized compound 2a in 42% yield. Then, the tricyclic compound 2a was subjected to RRM with Grubbs 1st generation (G-I) catalyst in the presence of ethylene to furnish the tetracyclic compound 1a in 75% yield (Scheme 1). The structures of compounds 2a and 1a have been confirmed on the basis of 1H, 13C NMR and DEPT-135 spectral data and further supported by HRMS data.

To expand the strategy, another DA adduct 3b was prepared from the commercially available 1,4-naphthoquinone and freshly cracked cyclopentadiene by following the literature procedure [33]. Allylation of adduct 3b under similar reaction conditions as described above gave O-allylated compound 2b and C-allylated compound 4a in 70% and 28% yields, respectively. Then, treatment of the O-allyl compound 2b with G-I catalyst in the presence of ethylene at room temperature (rt) produced the RRM product, a pentacyclic oxa-bowl 1b in 90% yield. When the C-allyl compound 4a was treated with G-II catalyst in CH2Cl2 at rt or in refluxing toluene, the propellane derivative 5a was obtained in 69% yield (Scheme 2). The structures of the new compounds 2b, 4a, 1b and 5a have been established on the basis of 1H and 13C NMR spectral data and further supported by HRMS data.

Having the C-allylated DA adducts 4a,b in hand, compound 4a was reduced with diisobutylaluminium hydride (DIBAL-H) at −74 °C to furnish diol 8a in 81% yield along with a minor amount of compound 9 (8%). The formation of compound 9 may be explained on the basis of a retro-DA reaction [36] followed by reduction and elimination. In the same way, reduction of C-allyl compound 4b under similar reaction conditions gave diol 8b in 88% yield.

In the next step, diols 8a,b were O-allylated with allyl bromide in the presence of NaH to furnish the desired RRM precursors 6a,b in 67% and 79% yields respectively (Scheme 4).

Finally, the tetraallyl derivatives 6a,b were subjected to RRM with G-I catalyst in the presence of ethylene at rt to produce the corresponding propellane/oxa-bowl hybrids 7a,b in 71% and 97% yields, respectively. The new compounds 2c, 4b, 1c, 8a,b, 9, 6a,b and 7a,b have been fully characterized by using spectroscopic techniques (1H, 13C NMR and DEPT-135) and HRMS data.

We have successfully synthesized diverse heterocycles 1a–c in a simple manner starting from the known DA adducts 3a–c, including the propellane/oxa-bowl hybrids 7a,b and propellane derivative 5a. Interestingly, the structurally complex propellane/oxa-bowl hybrids 7a,b were obtained through a four step synthetic sequence starting from simple DA adducts 3b,c, which are otherwise difficult to synthesize following conventional retrosynthetic routes. This methodology can easily be extended for diversity-oriented synthesis [37] by employing different dienes and dienophiles during the DA reaction sequence.

© 2015 Kotha and Gunta; licensee Beilstein-Institut.
This is an Open Access article under the terms of the Creative Commons Attribution License (http://creativecommons.org/licenses/by/2.0), which permits unrestricted use, distribution, and reproduction in any medium, provided the original work is properly cited.
The license is subject to the Beilstein Journal of Organic Chemistry terms and conditions: (http://www.beilstein-journals.org/bjoc) 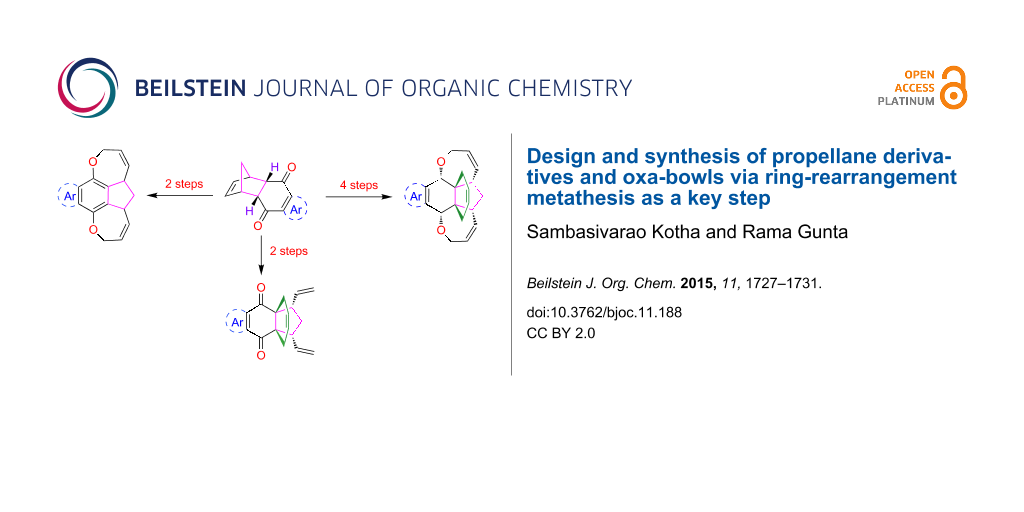