All articles from this author
Qian Cai

Copper-mediated coupling reactions, including the Ullmann [1], Ullmann–Goldberg [2,3], Ullmann diaryl ether formation [4] and Ullmann–Hurtley condensation [5], have been reported several decades before Pd and Ni-catalyzed reactions. However, the application of these methods was limited due to their disadvantages such as the requirement of stoichiometric amounts of copper and harsh reaction conditions (high temperatures). The turn of the millennium brought about the revival of the research in this field that was initiated by the use of soluble copper salts and ligand-coordinated Cu complexes as catalysts. This allowed the reactions to be carried out under much milder conditions. In the meantime these reactions have become one of the most classic, efficient and powerful methods for the formation of C–C, C–N, C–O and other carbon–heteroatom bonds. Extensive applications have been developed in both academia and industry [6-13]. Despite the progress in recent years, the research on asymmetric coupling reactions is still relatively rare. In this review, we highlight the developments in copper-catalyzed asymmetric coupling reactions, including the asymmetric coupling of aryl halides with nucleophiles for the formation of carbon–carbon and carbon–heteroatom bonds as well as the asymmetric allylic substitution with a wide range of nucleophiles for the formation of C–C and carbon–heteroatom bonds.

The biaryl motif is a key subunit in many natural products and axially chiral ligands. The classical Ullmann coupling is one of the most important methods for the practical synthesis of biaryls [14]. However, only few reports of an asymmetric version of the Ullmann coupling have been documented. The first attempt of an intermolecular asymmetric Ullmann coupling for the formation of biaryls was reported by Miyano and co-workers in 1980. The authors used a chiral ester group as auxiliary but only poor diastereoselectivity (13% de) was obtained [15]. A few years later, the same group took advantage of a chiral (R)-BINOL-bridge to link the two aromatic acids and obtained the coupling product with excellent stereocontrol (up to 100% de) (Scheme 1) [16-19].

In 2006, Keay et al. [21] successfully developed an intramolecular asymmetric Ullmann coupling for the preparation of 3,3’-disubsituted MeO-BIPHEP derivatives using a chiral ester auxiliary that was easily prepared from (R)-2-hydroxy-3,3-dimethylbutyrate. In this reaction, only one diastereoisomer was formed during the Ullmann coupling and the auxiliary is easily prepared and removed by hydrolysis after the coupling reaction (Scheme 3).

In 2007, Breit et al. [22] employed a chiral tether to link two aryl halides for the enantioselective synthesis of trans-4,5,9,10-tetrahydroxy-9,10-dihydrophenanthrene at room temperature (Scheme 4).

In 1994, Meyers and Nelson [23,24] developed a copper-mediated asymmetric biaryl coupling with oxazoline as the chiral auxiliary to afford the biaryl-coupling products in high diastereomeric purity (dr = 93:7, Scheme 5).

Meyers et al. also successfully applied the aforementioned strategy to the asymmetrical synthesis of many natural products [25-27] such as O-permethyl-tellimagrandin I (Scheme 6), (+)-gossypol (Scheme 7), (−)-mastigophorene A (Scheme 8).

In 1994, an impressive progress was made by Lipshutz [30] in the intramolecular oxidative biaryl-coupling through the formation of higher-order cyanocuprates. The authors realized an asymmetrical intramolecular reaction by means of inexpensive optically active auxiliary bridges. The most efficient chiral auxiliary was found to be a C2-symmetrical bridge bearing two stereogenic centers, derived from tartaric acid, giving the product as a single isomer in good yield (Scheme 11).

The utility of this strategy was also demonstrated by the atroposelective synthesis of many very useful axially chiral ligands and biologically important natural products. Some representative examples of these compounds are collected in Scheme 14. In 1997, Andrus et al. [33] used this method for the synthesis of enantiomerically pure bisoxazoline. Lin and Zhong [34] synthesized the natural product kotanin. Coleman and Grant [35] described an efficient synthesis of calphostin A, a potent protein kinase C inhibitor. In 2002, Marinetti et al. [36,37] employed this approach to prepare biaryl diphosphines. In 2004, Chan et al. [38] also developed a diastereoselective synthesis of chiral biphenyl diphosphine ligands by means of an intramolecular Ullmann coupling with the introduction of chiral bridged ethers.

In 1929, Hurtley reported the first example of a C-arylation reaction of malonic esters with 2-bromobenzoic acid using a catalytic amount of copper-bronze or copper acetate [5]. Later on, great progress has been made in this reaction, allowing it to be carried out under practically useful and mild conditions [9-11]. However, an enantioselective version of this type of reaction remained challenging. Up to 2006 the report by Ma et al. [39] has been the only example of this type of catalytic asymmetric coupling reaction. They reacted 2-halotrifluoroacetanilides with 2-methylacetoacetates under the catalysis of CuI/trans-4-hydroxy-L-proline and obtained the arylated products in good yields and enantioselectivities. In this reaction, the trifluoroacetamido moiety present in the ortho position of the aryl halides plays an important role in enantiocontrol (Scheme 15).

In the past, the asymmetric version of aryl C–N/O/S coupling reactions has not attracted the attention from the organic chemistry community. This may have been due to the fact that these reactions do not allow for the direct creation of new stereochemical centers. Only a few examples were reported for asymmetric N-arylation reactions using a Pd catalytic system through an “indirect” way, either by asymmetric desymmetrization or kinetic resolution [40-44]. In most cases, the enantioselectivities were not satisfactory. Recently, a copper catalytic system became another option toward asymmetric N-arylation reactions in term of improving enantioselectivity and efficiency.

In 2012, Cai et al. [45] developed the first copper-catalyzed asymmetric intramolecular Ullmann C–N coupling reaction through a desymmetrization strategy. The reaction lead to the enantioselective formation of indolines and tetrahydroquinolines in high yields and up to >99% ee (Scheme 16).

The same group also observed that achiral additives such as 4-(N,N-dimethylamino)pyridine caused an unexpected inversion of enantioselectivity in the Cu-catalyzed asymmetric desymmetrization of α,α-bis(2-iodobenzyl)glycines when (2S,3aS,7aS)-octahydro-1H­indole-2-carboxylic acid was used as chiral ligand [47] (Scheme 18).

In 2015, Cai et al. reported another type of desymmetrization process, which allowed for the discrimination between two symmetric nucleophilic amine-type groups. Enantiocontrol using such substrates is more difficult in the asymmetric desymmetric aryl C–N coupling reaction because the two nucleophilic groups may serve as good chelating ligands and thus compete with the chiral ligand for binding with the copper salts. Therefore the authors used a mono-aryl halide-substituted malonamide in the presence of a chiral CuI/1,2-diamine catalyst system and obtained the desired products in good yields and moderate enantioselectivities [48] (Scheme 19).

Recently, the aforementioned kinetic resolution strategy was applied to another type of substrates [51], leading to the formation of cyano-substituted quaternary stereocenters (Scheme 22).

Numerous methods have been developed during the last two decades for the formation of aryl C–O bonds but asymmetric aryl C–O coupling is still a challenge [6-10]. In 2013, Beaudry and Quamar Salih reported the first copper-catalyzed asymmetric diaryl ether formation in the synthesis of (−)-myricatomentogenin, (−)-jugcathanin, (+)-galeon and (+)-pterocarine [52]. However, the enantioselectivity was poor in most cases. In 2013, Cai and co-workers [53] reported the first Pd-catalyzed highly enantioselective intermolecular aryl C–O coupling reaction for the construction of chiral (3,4-dihydro-2H-chromen-3-yl)methanols in good yields and high enantioselectivity by means of a desymmetrization strategy. A modified palladium catalytic system with a SDP(O) ligand was developed in 2015 for the asymmetric desymmetrization of 2-(2-halophenoxyl)-1,3-diols by the same group [54]. However, the palladium catalytic systems suffered from limited substrate scope and poor efficiency and enantioselectivity for the formation of quaternary stereocenters. Recently, Cai et al. carried out such couplings using a CuI/cyclized diamine catalytic system for the formation of 2,3-dihydrobenzofurans and analogs [55]. The copper catalytic system proved very efficient and compatible with a wide range of substrates under mild conditions. It overcame the shortcomings of the palladium catalytic system for the formation of quaternary stereocenters (Scheme 23).

Transition metal-catalyzed allylic substitutions are the most important process for carbon–carbon and carbon–heteroatom bond formation in organic synthesis [56-58]. Allylic substitution of the substrate with nucleophiles can afford two different products: the SN2-product or the SN2’-product (Scheme 24).

In 1995, Bäckvall et al. reported the first example of an asymmetric allylic substitution reaction catalyzed by a chiral copper complex, giving a moderate enantioselectivity (42% ee) in Grignard reactions with allylic acetates. The enantiomeric excess was later improved to 64% by using a new chiral ferrocenyl ligand [61,62]. Subsequently, great progress has been made in the development of copper-catalyzed asymmetric allylic substitution reactions. These considerable progresses have been reviewed by Hoveyda [56], Oshima [57], Alexakis [58], Feringa [59] and Diéguez [60]. In this review, we focus on the developments since 2008.

In 2012, Hoveyda and Jung reported a copper/NHC-catalyzed asymmetric allylic substitution of allyl phosphates with allenylboronates [66], leading to chiral allenes bearing a tertiary or quaternary carbon stereogenic center in high yields and with excellent enantioselectivity (Scheme 26).

The copper/NHC catalyst system was also applied to the allylic substitution of allyl phosphates with commercially available or easily accessible vinylboron reagents, leading to chiral alkenes bearing a quaternary carbon stereocenter. The utility of this protocol was demonstrated by the concise enantioselective syntheses of the Pummerer ketone (Scheme 27) [67].

In 2012, Sawamura et al. reported a Cu(I)-DTBM-SEGPHOS-catalyzed enantioselective allylic substitution reaction with alkylboron compounds [68]. In this report, alkyl-9-BBN reagents for the first time served as nucleophiles reacting with primary allylic chlorides with excellent γ-selectivity and with high enantioselectivity (Scheme 28).

This catalytic system is however restricted to the construction of tertiary carbon stereocenters. An improved catalytic system [69,70] allowed disubstituted primary allyl chlorides to react with alkylborane (alkyl-9-BBN) for the generation of a quaternary carbon stereogenic center bearing three sp3-alkyl groups and a vinyl group with an ee up to 90% (Scheme 29).

Chiral allylboronates are useful reagents, which could be manipulated in a number of useful ways to give functionalized chiral building blocks such as allylic alcohols, amines etc. [79]. Sawamura et al. [80] developed a highly enantioselective copper-catalyzed asymmetric allylic substitution with diboronates to afford chiral allylboronates (Scheme 33).

The catalytic enantioselective allylic alkylation of alkynyl nucleophiles is a powerful tool for the preparation of 1,4-enynes, which are versatile synthetic intermediates in asymmetric organic synthesis [82]. In 2014, Sawamura et al. [83] successfully developed a highly enantioselective allylic alkylation of terminal alkynes with primary allylic phosphates through a copper/NHC chiral catalyst system. The authors obtained chiral enynes with a tertiary stereocenter at the allylic propargylic position in good yield and with excellent enantioselectivity (Scheme 35).

Copper-catalyzed or -mediated enantioselective carbon–carbon or carbon–heteroatom coupling reactions have been one of the most challenging areas in asymmetric catalysis in recent years. The asymmetric copper-catalyzed C(Aryl)–C(Aryl) bond formation through the incorporation of a chiral ester group as auxiliary into the substrates, has emerged as a powerful tool for constructing natural products and useful ligands with axial chirality. Based on asymmetric desymmetrization and kinetic resolution strategies, a series of efficient copper-catalyzed systems have been developed for the formation of C–C, C–N, C–O bonds and the construction of nitrogen- and oxygen-containing ring systems. Despite the substantial progress that has been made in copper-catalyzed or -mediated enantioselective carbon–carbon and carbon–heteroatom coupling reactions, limitations in terms of substrate scope and catalyst efficiency still exist. In the future, the design of new ligands and improved catalyst systems are required that allow for transformations of more challenging substrates.

The authors are grateful to National Natural Science Foundation (Grant 21272234, 21572229) for the financial support.

© 2015 Zhou and Cai; licensee Beilstein-Institut.
This is an Open Access article under the terms of the Creative Commons Attribution License (http://creativecommons.org/licenses/by/2.0), which permits unrestricted use, distribution, and reproduction in any medium, provided the original work is properly cited.
The license is subject to the Beilstein Journal of Organic Chemistry terms and conditions: (http://www.beilstein-journals.org/bjoc) 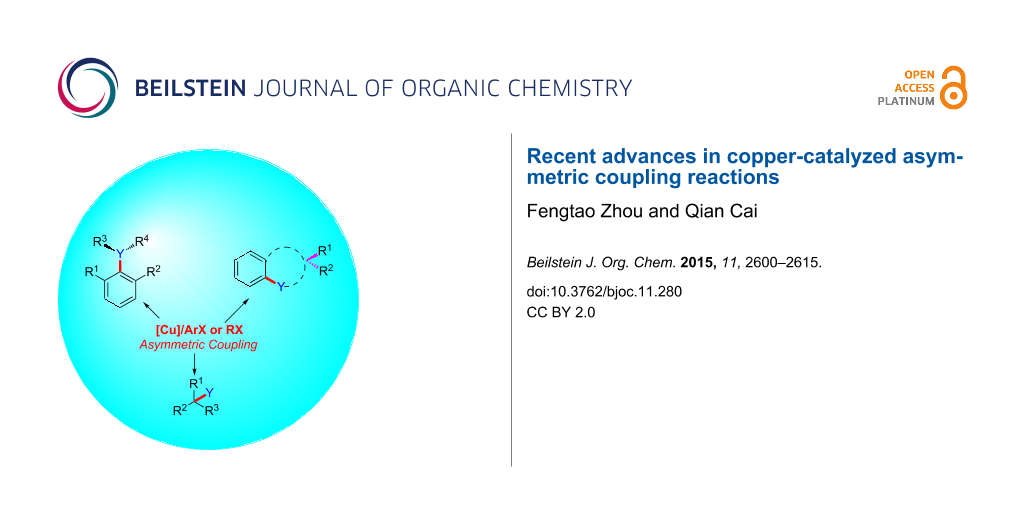