All articles from this author
Xue Zhou


All articles from this author
Guangfan Zheng


All articles from this author
Qian Zhang

NFSI is a very interesting reagent. Besides classic electrophilic fluorination reagent [37], it has been used not only as fluoride-atom transfer reagent [38-40] but also as nucleophilic/radical amination reagent [41]. We are highly interested in the multiple reaction modes of NFSI [37-41], especially as a nitrogen-centred radical. In this context, we have realized copper-catalyzed benzylic sp3 C–H amination [42], aminative multiple functionalization of alkynes [43], diamination, aminocyanation [44] and aminofluorination of alkenes [45], as well as amination of allenes [46]. Encouraged by these results, we try to develop copper-catalyzed aminooxygenation of alkenes by using NFSI. Herein, we report a simple and efficient copper-catalyzed three-component aminooxygenation reaction of styrenes with NFSI and N-hydroxyphthalimide (NHPI) derivatives (Scheme 1).

With the optimized reaction conditions in hand (Table 1, entry 23), the scope of this copper-catalyzed aminooxygenation reaction was examined (Figure 2). Styrenes with electron-withdrawing (1a–f) or electron-donating (1h and 1i) groups were viable, providing the corresponding 1,2-aminoalcohol derivatives in good yields. It is worth noting that functionalities such as F, Cl, Br, CN, and NO2 groups, which could easily undergo further transformations, were intact after the reaction (3a–e). The structure of 3e was confirmed by X-ray crystallographic analysis [47]. The substituent at the ortho (3j and 3k) or meta (3l) position of the aromatic ring did not hinder the reaction (41–55% yields). Similarly, for disubstituted (1m) and trisubstituted (1n) substrates, the aminooxygenation underwent smoothly, providing the corresponding products 3m (51%) and 3n (53%). The trans-β-methylstyrene (1o) afforded the desired product 3o in a low yield (15%). In addition, NHPI derivatives 2b and 2c were suitable nitrogen sources and the desired 3p and 3q were obtained in 56% and 64%, respectively. For 4-methoxystyrene (1r), no aminooxygenation reaction occurred.

Based on these experimental results and our previous investigations [42-46,48], a plausible mechanism for the copper-catalyzed three-component aminooxygenation of styrenes with NFSI an NHPI is shown in Scheme 2. Initially, the oxidation of Cu(I) with NFSI provided F–Cu(III)–N complex I, which could transform into a copper(II)-stabilized benzenesulfonimide radical II through a redox isomerization equilibrium. Next, the intermolecular radical addition of II to styrene 1g took place, producing benzylic radical III and Cu(II)–F species IV. The combination of the intermediates III and IV gave the Cu(III) species V having a C–Cu bond, which reacted with 2a to generate Cu(III)–O species VI, along with the loss of HF. Finally, the reductive elimination of VI afforded aminooxygenation product 3g.

Finally, we tried to investigate the synthetic value of our new aminooxygenation method. Then, the selective reduction of 3g was conducted (Scheme 3). The cleavage of the N–O bond in 3g readily occurred with Mo(CO)6/Et3N at 80 °C to give alcohol 4 [36] in 67% yield. Treatment of 3g with NH2NH2·H2O under mild conditions (25 °C) in CHCl3/MeOH gave free amine 5 in 70% yield.

In summary, we have developed a novel copper-catalyzed three-component aminooxygenation reaction of styrenes with NFSI and NHPI derivatives. Furthermore, the aminooxygenation product could be easily converted into the corresponding alcohol or free amine through the cleavage of the N–O or C–N bond of the NHPI moiety. Further studies are underway in our lab.

© 2015 Li et al; licensee Beilstein-Institut.
This is an Open Access article under the terms of the Creative Commons Attribution License (http://creativecommons.org/licenses/by/2.0), which permits unrestricted use, distribution, and reproduction in any medium, provided the original work is properly cited.
The license is subject to the Beilstein Journal of Organic Chemistry terms and conditions: (http://www.beilstein-journals.org/bjoc) 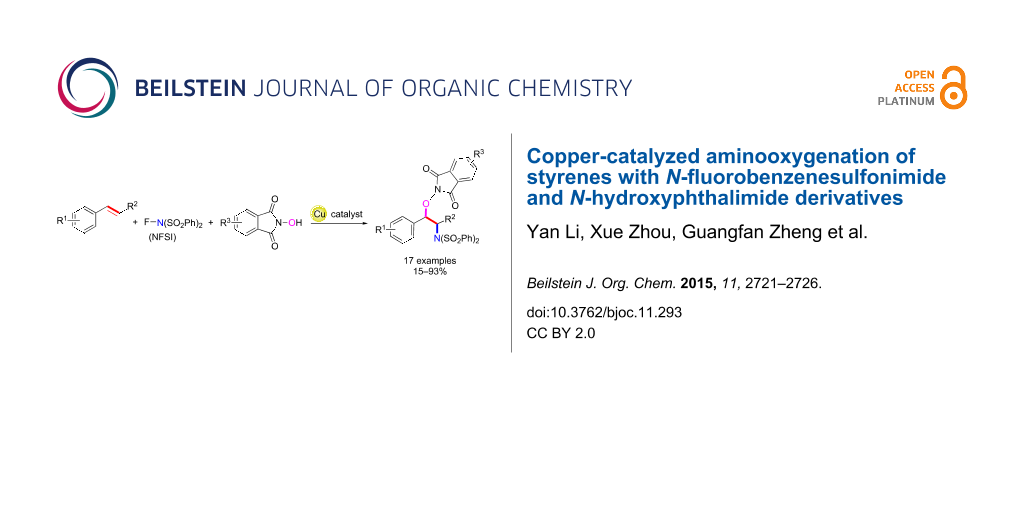