All articles from this author
Hongnan Sun


All articles from this author
Chao Yang


All articles from this author
Youdong Yang


All articles from this author
Xinxin Zhao


All articles from this author
Wujiong Xia

A visible-light-induced photoredox-catalyzed bromoetherification of alkenols is described. This approach, with CBr4 as the bromine source through generation of bromine in situ, provides a mild and operationally simple access to the synthesis of β-bromotetrahydrofurans and -tetrahydropyrans with high efficiency and regioselectivity.

The halocyclization of alkenes provides an excellent synthetic method for halogenated heterocycles [1-3]. In recent years, haloaminocyclization [4,5], halolactonization [6,7] and haloetherification [8,9] of alkenes have received considerable attention from chemists, and various approaches have been made in this area. Initially, the classical synthetic pathway for bromocyclization proceeds utilizing bromine [10]. However, molecular bromine is hazardous and difficult to handle. Further research show that N-bromosuccinimide (NBS) is an effective alternative for the bromocyclization [11-14]. Furthermore, Wei Sun and co-workers disclosed an intriguing strategy to access the haloetherfication of alkenols with N-chlorosuccinimide (NCS), leading to the synthesis of β-chlorotetrahydrofurans [15]. Recently we have reported that visible-light-induced photoredox catalysis could serve as a more environmental-friendly alternative reaction system to obtain Br2 in situ from CBr4, an oxidative quencher of photoredox catalyst [16-22]. Thus, as part of difunctionalization of alkenes, with our continuous investigations on the photoredox catalytic reactions [16,23-27], herein we report our preliminary studies on visible-light-induced photoredox-catalyzed bromoetherification of alkenols using CBr4 as the bromine source.

Our initial studies were focused on the reaction of alkenol 1a as a model reaction for optimizing the reaction conditions. We were encouraged by the discovery that when 1a, CBr4 and Ru(bpy)3Cl2 were irradiated by blue LEDs in MeCN for 4 hours, trans-β-bromotetrahydrofuran 2a was obtained via 5-endo bromoetherification reaction, although the yield was only 31% (Table 1, entry 2). We have reported the bromoetherification of compound 1a as an example in our previous article [16]. However, considering the value of this strategy for the synthesis of β-bromotetrahydrofurans and -tetrahydropyrans, further research were carried out to optimize the reaction conditions. Moreover, the stereochemistry of the bromotetrahydrofurans compound 2a was misidentified before. Herein, the stereochemistry of the bromotetrahydrofurans compound 2a was determined by NOE spectra, for details see Supporting Information File 1. After a screening of selected solvents, we found solvents had a significant effect on the reaction efficiency (Table 1, entries 1–5). The reaction in DMSO led to the highest yield up to 94% (Table 1, entry 1). In addition, 2 equivalents of CBr4 were required for the efficient transformation (Table 1, entries 6 and 7). Furthermore, when the catalyst loading was reduced to even 1 mol %, the reaction also gave a comparable result (Table 1, entry 8). It should be pointed out that no reaction was observed in the absence of light or photocatalyst.

To add more credence to the involvement of bromine in this protocol, a control experiment was conducted by reaction of alkenol 1a with liquid bromine in DMSO which led to trans-β-bromotetrahydrofuran 2a in 95% yield (Scheme 1). Such a result is in accordance with the case of 1a reacted under the standard reaction conditions of this protocol.

Based upon the above results, the mechanism is proposed as shown in Scheme 2. Firstly, oxidative quenching of the visible-light-induced excited state Ru(bpy)32+* by CBr4, generates Br− along with the Ru(bpy)33+ complex. Then bromine was generated in situ through the oxidation of Br− by Ru(bpy)33+ [16], sequential reaction with alkene 1a forms the three-membered bromonium intermediate 4 [28]. Finally, intramolecular nucleophilic cyclization furnishes the desired product β-bromotetrahydrofuran 2a.

In summary, we have developed a mild and operationally simple method for the bromoetherification of alkenols with CBr4 as the bromine source, utilizing visible-light-induced phototedox catalysis. The reaction proceeds with high efficiency and regioselectivity for the synthesis of β-bromotetrahydrofurans and -tetrahydropyranes.

To a 10 mL round bottom flask equipped with a magnetic stir bar were added alkenols 1 (0.2 mmol), CBr4 (132 mg, 0.4 mmol), Ru(bpy)3Cl2 (4.6 mg, 0.006 mmol) and dry DMSO (2 mL). The mixture was irradiated with blue LEDs (1 W) at room temperature without being degassed for 4 hours. Then water was added and the aqueous layer was extracted with ethyl acetate. The combined organic layers were washed with brine, dried over anhydrous Na2SO4 and concentrated. The residue was purified by flash column chromatography to give the final products 2.

© 2015 Lin et al; licensee Beilstein-Institut.
This is an Open Access article under the terms of the Creative Commons Attribution License (http://creativecommons.org/licenses/by/2.0), which permits unrestricted use, distribution, and reproduction in any medium, provided the original work is properly cited.
The license is subject to the Beilstein Journal of Organic Chemistry terms and conditions: (http://www.beilstein-journals.org/bjoc) 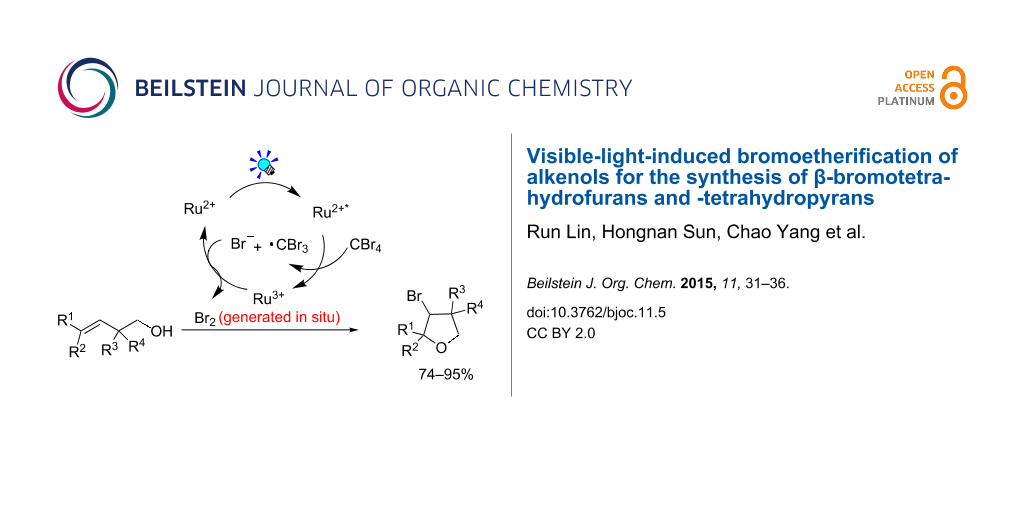