All articles from this author
Mary J. Cloninger

Galectin-1 is a multivalent protein that mediates biological activity through multivalent interactions with cell surface glycoconjugates [1-4]. Galectin-1 is a non-covalent homodimer that belongs to a family of β-galactoside binding proteins called galectins [5-7]. The monomeric units are oriented such that the two carbohydrate recognition domains are located on apposing faces of the dimer (Figure 1). Although individual binding interactions with carbohydrates are weak [8], ligands for galectin-1 typically possess an array of carbohydrates to enhance the binding affinity [1,9,10]. Galectin-1 binding to carbohydrates cross-links adjacent glycoconjugates to mediate biological activity [10-16]. Specifically, galectin-1 has been reported to be involved in multivalent mechanisms that cluster cell surface glycoproteins [10,17], cross-link receptors [13,18], and form lattices and larger aggregates [12,19,20]. Synthetic multivalent ligands displaying multiple copies of recognition elements are a logical tool to study mechanisms of galectin-1 mediated biological activities.

Mutivalent frameworks have been used to organize lectins and to mediate biological activity for the advancement of mechanistic understandings [22-25]. Synthetic multivalent ligands have been observed to enhance galectin-1 binding through the glycoside cluster effect by mediating the formation of cross-linked aggregates [26-28]. Tinari et al. observed galectin-1 augmentation of homotypic cellular aggregation in human melanoma cells (A375) through bivalent binding of 90K/Mac-2BP, a cell surface glycoprotein [29]. To further the understanding of structural specificity in binding events, Iurisci et al. designed multivalent oligosaccharide ligands to inhibit galectin-1 induced homotypic cellular aggregation in the A375 cell line [30]. Belitsky et al. designed self-assembled pseudopolyrotaxanes as a flexible and adaptable multivalent neoglycoconjugate for galectin-1 [31]. Using this multivalent supramolcular architecture, galectin-1 was observed to bind to flexible multivalent ligands with higher affinity than could be achieved using less dynamic ligand displays.

Poly(amidoamine) (PAMAM) dendrimers were used as a multivalent framework to study multivalent protein–carbohydrate interactions. The PAMAM structure is shown in Figure 2a. Second, third, fourth, and sixth generation dendrimers were functionalized with lactoside endgroups using a bis-ethoxy linker for solubility to afford 1–4 (G(2), G(3), G(4), and G(6), respectively, Figure 2b) [32].

The sizes of the galectin-1/glycodendrimer nanoparticles that were formed using multivalent lactose-functionalized PAMAM dendrimers 1–4 were determined by fluorescence microscopy (FM) and dynamic light scattering (DLS). For fluorescence microscopy, galectin-1 was labeled with AlexaFluor-555, and aggregation was characterized when a large, medium, or slight excess of galectin-1 was used relative to the concentration of the dendrimer (220:1, 9:1, or 3:1 ratio of galectin-1 to dendrimer, respectively). Fluorescent microsphere standards (FluoSpheres Fluorescent Microspheres, Molecular Probes) and image analysis software (Pixcavator 6.0) were used for size quantifications.

Using DLS, the specificity of the interaction between galectin-1 and the lactosides on the multivalent glycodendrimers was assessed. Serially diluted solutions of monomeric lactose were co-incubated with galectin-1 and compound 4. Complete inhibition of aggregation was achieved by monomeric lactose, with an IC50 of 1.9 mM, indicating that a specific interaction between the lactose endgroups on the dendrimers and the carbohydrate recognition site of galectin-1 occurs when nanoparticles are formed (Figure 6).

Control experiments were performed with different functional groups on the multivalent framework. No aggregates were detected upon the addition of a polyhydroxylated sixth generation dendrimer, indicating that binding requires more than merely an array of hydrogen bonds. Small nanoparticles (340 ± 20 nm) were obtained when mannose functionalized G(6)-PAMAMs were combined with galectin-1, and neither monomeric lactose nor monomeric mannose inhibited the formation of these aggregates. This indicates that nanoparticles formed using the mannose-functionalized dendrimer do not rely on interactions in the β-galactoside binding site on galectin-1 and that non-specific glycodendrimer/galectin-1 interactions are responsible for the formation of these small aggregates. Miller et al. observed galectin-1 binding to α-galactomannan derivatives, and NMR was used to determine that the interaction did not occur in the canonical CRD [33].

After determining that lactose-functionalized dendrimers 1–4 reproducibly nucleate formation of galectin-1 aggregates that are quite homogeneous, we used these nanoparticles in cellular aggregation assays with galectin-1 and DU145 human prostate cancer cells. The DU145 cell line was chosen because it expresses a putative galectin-1 ligand – the Thomsen Friedenreich (TF) antigen on Mucin-1 [34,35].

The results of the fluorescence microscopy and DLS studies described above reveal that multivalent glycodendrimers organize galectin-1 into nanoparticles. In the presence of a large excess of galectin-1, multivalent glycodendrimers 2–4 organize galectin-1 into relatively small and remarkably homologous nanoparticles (Figure 3 and Figure 4a–c). This is likely a result of the multivalent framework being saturated with galectin-1, providing few uncomplexed nucleation sites for incorporation into larger nanoparticles (Figure 8). Therefore, an increase in the concentration of the multivalent framework should correlate to an increase in aggregate size, as was observed for 9:1 and 3:1 ratios of galectin-1 to glycodendrimer (Figure 3 and Figure 8). The exception to this is that small homogeneous nanoparticles were observed for compound 3 when a slight excess of galectin-1 was used (3:1). In this lactoside-rich environment, the presence of a large excess of lactoside residues apparently enabled increased nucleation at the expense of aggregation, but it isn’t clear why 3 is different from the other dendrimers in this regard. Overall, the results described here agree with mathematical modeling studies that identified scaffold concentration as a key determinant in maximizing scaffold-mediated nucleation [36].

The size of the nanoparticles formed in the presence of a large excess of galectin-1 is fundamentally remarkable. In the presence of enough galectin-1 to saturate the multivalent framework, aggregates approximately 400 nm in diameter were measured (Figure 3). The distance between the galectin-1 CRDs is approximately 5 nm [21]. The diameter of the G(3), G(4), and G(6)-PAMAM dendrimers used to synthesize compounds 2, 3, and 4, respectively, range from approximately 4 nm to 7 nm [37]. Therefore, multiple galectin-1 and glycodendrimer particles must interact to form the 400 nm aggregates, and this is favorable even when the scaffold is ostensibly saturated with galectin-1.

The DU145 human prostate carcinoma cell line was chosen to demonstrate that multivalent interactions initiated by a synthetic multivalent system can be used for effectively controlling cellular processes. DU145 cells express elevated levels of both galectin-1 [38] and its putative receptor Mucin-1 [34], which suggests that galectin-1 mediated β-galactoside binding is critical to cellular aggregation/tumor formation in this cell line. In the presence of exogenous galectin-1, extensive cellular aggregation was observed. Inducement of aggregation by exogenous galectin-1 comports with literature reporting pro-adhesive activity with galectin-1 [38-41]. There are two likely mechanism for galectin-1 mediation of cellular aggregation: (i) cross-linking of glycoconjugates (TF antigen Mucin-1) on adjacent cells which directly facilitates aggregation; and (ii) clustering of receptors (TF antigen Mucin-1) which exposes adhesion molecules that interact with adhesion molecules on neighboring cells to cause aggregation.

All four generations of the glycodendrimers inhibited galectin-1 mediated cellular aggregation of the DU145 cells, which indicates that glycodendrimers mediate inhibition of cellular aggregation by competitively binding galectin-1, thereby altering its presentation to cells and preventing cellular cross-linking. Lactose functionalized G(2)-PAMAM 1 was the most potent inhibitor of galectin-1 induced cellular aggregation, exhibiting complete inhibition of cancer cell adhesion at low dosage (Figure 4). Galectin-1/1 nanoparticles were not detected by DLS or fluorescence microscopy. Because galectin-1 is known to bind these glycodendrimers, it is likely that aggregates formed but were below the detection limit of the fluorescence microscopy technique (which is about 200 nm). The formation of aggregates smaller than 200 nm in diameter, and thus not detectable by fluorescence microscopy, lends further credence to the argument that small galectin-1/glycodendrimer aggregates effectively alter the presentation of galectin-1 to cells, thereby altering the cells’ recognition events.

The concept that multivalency can be used to effectively control cellular activities was investigated using lactose functionalized dendrimers. First, the ability of the multivalent framework to organize galectin-1 was assessed with dynamic light scattering and fluorescence microscopy. These studies indicate that multivalent glycodendrimers nucleate the aggregation of galectin-1 into nanoparticles, which were remarkably homogenous when formed in the presence of a large excess galectin-1. Next, glycodendrimers were added to cancer cells to modulate galectin-1 mediated cellular aggregation. The glycodendrimers inhibited cellular aggregation by providing competitive binding sites for the galectin-1 and diverting the galectin-1 from its native role in cellular cross-linking, which leads to cellular aggregation/tumor formation. These studies reveal that mutivalency can be exploited not only to modulate biological activities but also as a platform to advance the understanding of biologically relevant protein/carbohydrate interactions through the ability to organize proteins into biologically active arrays.

Human prostate carcinoma cells (DU145, ATCC HTB-81) were purchased from ATCC, and maintained in Dulbecco’s modified Eagle’s medium (DMEM, Gibco) supplemented with 10% fetal bovine serum (FBS, Gibco). 2 mg/mL stock solutions of glycodendrimers were prepared in PBS buffer. Increasing glycodendrimer concentrations were added to a constant concentration of galectin-1 (3.7 µM) and cancer cells (≈240,000/eppendorf). Glycodendrimer concentrations were calculated to present approximately equal concentrations of lactosides residues at the same stage in the assays irrespective of PAMAM generation. Control assays for untreated cells (untreated standard) and the galectin-1 treated cells (galectin-1 standard) were performed. Control assays with the glycodendrimers and without galectin-1 were previously performed [44]. Assays were incubated at 37 °C and gently rotated for 1 hour. Images were captured on a Jenco microscope with 10× objective, and quantification was achieved using image analysis software (Pixcavator 6.0). Particles of fewer than five cells were defined as free cells and particles greater than five cells were defined as aggregated. Statistical analyses were performed using unpaired two-tailed student’s T-Test by comparison to the galectin-1 standard. Statistically significant data is represented as * if p < 0.05, ** if p < 0.01, and *** if p < 0.001. The interaction between the galectin-1 and the DU145 cells generated large aggregates that exceeded the detection limit of the technique. Visual inspection of galectin-1 treated cells confirmed nearly complete aggregation of all cells; therefore, the percentage of free cells for the galectin-1 treated DU145 cells without glycodendrimer (galectin-1 stnd) was conservatively set at 20%.

We would like to acknowledge Dr. Linda Baum and Mabel Pang for providing the galectin-1, the Imaging and Chemical Analysis Laboratory at MSU for guidance with the fluorescent microscope, Dr. Candace Goodman for assistance with DLS and fluorescence microscopy, and Dr. Anna Michel for assistance with the cell-based assays. This research was supported by NIH GM62444 and NSF 121434.

Formation of an unexpected 3,3-diphenyl-3H-indazole through a facile intramolecular [2 + 3] cycloaddition of the diazo intermediate

© 2015 Cousin and Cloninger; licensee Beilstein-Institut.
This is an Open Access article under the terms of the Creative Commons Attribution License (http://creativecommons.org/licenses/by/2.0), which permits unrestricted use, distribution, and reproduction in any medium, provided the original work is properly cited.
The license is subject to the Beilstein Journal of Organic Chemistry terms and conditions: (http://www.beilstein-journals.org/bjoc) 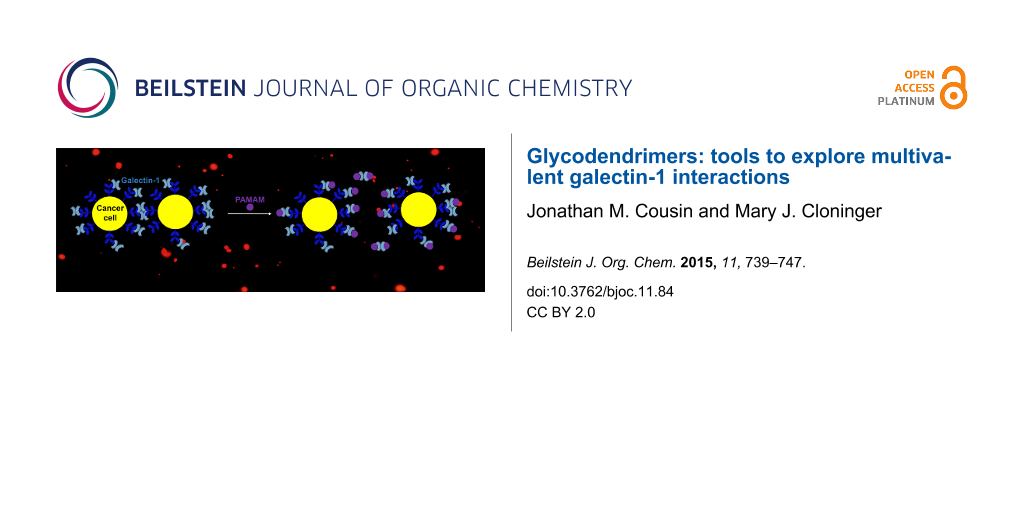